There’s a reason aliens like Antonio ‘Tony’ Cairoli have an Airoh helmet on their heads.

It’s not quite the same reason I have one on mine, but I do understand what the attraction is.

If you didn’t know, Tony is an eight-time Grand Prix MX world champion, and lauded the world over as one of the greatest dirt-bike riders of all time.

Now, while I am not even a one-time MX anything other than maybe a water-boy, that doesn’t mean I cannot access and wear a helmet like the Airoh. Just like Tony.

Airoh helmets are relatively new to Australia, and I first discovered them while soiling myself at my local MV Agusta store in Parramatta. 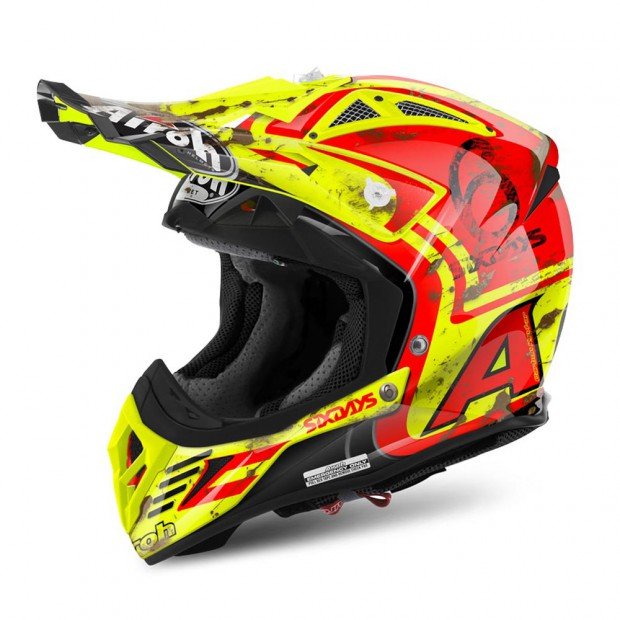 Look at it. It is spectacular. 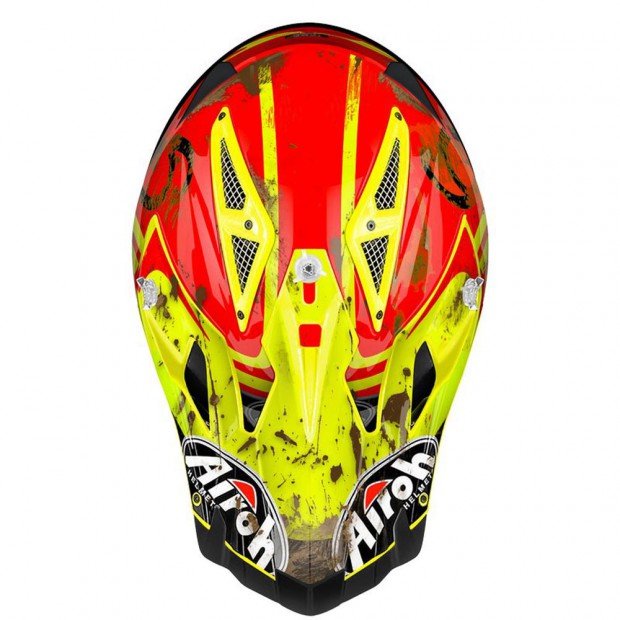 Those vents go all the way through. But you can cover them up if you’re planning on drowning in mud. 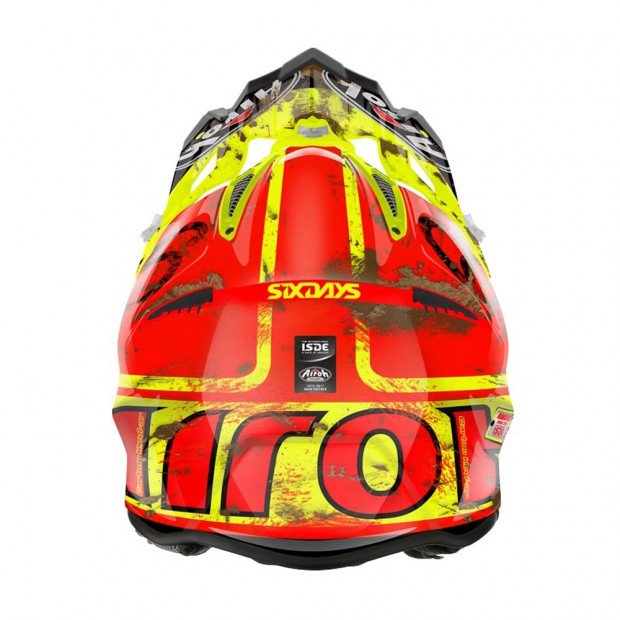 What the competition should see. Oh, and that’s not dirt. That’s the graphics.

“You seen these helmets?” the store manager David asked me.

“Don’t care about helmets,” I said, adjusting my uncomfortable pants in front of an F4RR that was painted like some kind of unaffordable supermodel prostitute.

“I’m feeling it,” I responded.

He tossed me the lid, a gloriously garish fluoro-yellow dirt-bike lid.

“You’re kidding,” I grinned, hefting the lid in my hands. “What does this weigh?”

“That’s crazy,” I said, turning the helmet over in my hands.

And it was. This dirt helmet was lighter than my Bell open-face. And it was very much lighter than any of the full-face road- and off-road helmets I store in my shed.

Now I don’t know much, but I do know this:

The heavier the helmet you put on your head is, the more complicated the chain of events that will happen if you crash and need that helmet to help your head out, as it were. Works just fine on the road. 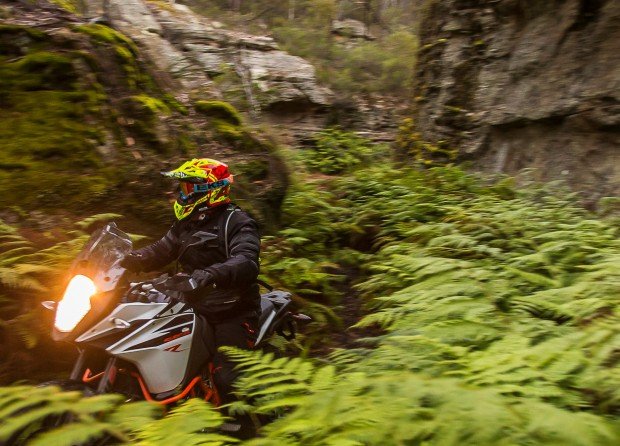 Works just fine in the jungle, too.

It is defined thus: “Inertia is the resistance of any physical object to any change in its state of motion; this includes changes to its speed, direction, or state of rest. It is the tendency of objects to keep moving in a straight line at constant velocity.”

So in an accident, where changes of direction can be chaotic and often end in an impact, helmet weight is crucial issue. Put simply, the lighter the weight you’re carrying on your head and supported by your rather fragile spinal column, the better the result will be in an accident in terms of mitigating inertia.

Your neck-bones will be happier changing directions the less weight your head is carrying. 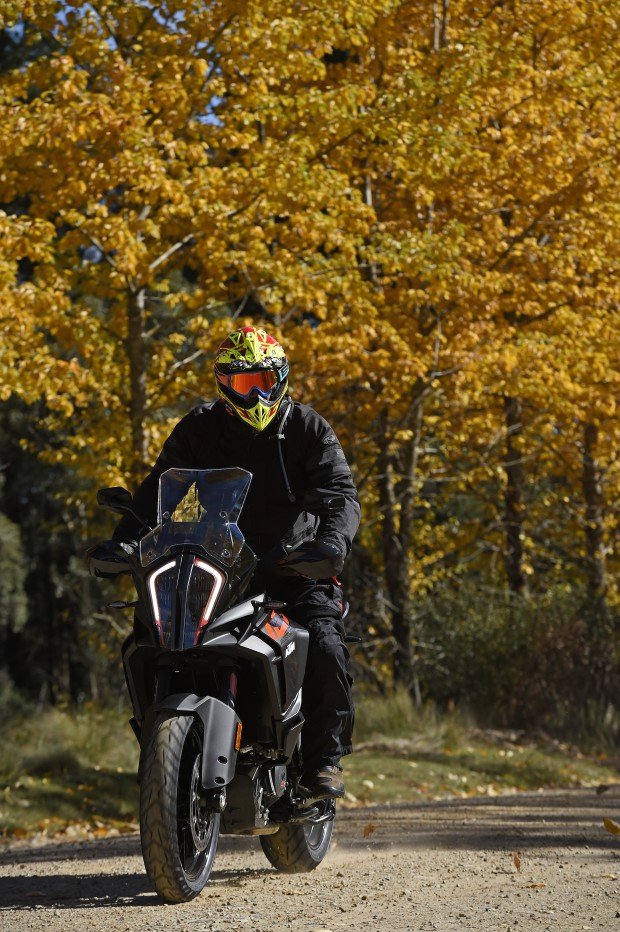 And cruising your local state forest is a breeze.

And it’s the science of grams. Put a helmet weighing less than a kilo on your head and it instantly feels very different to a one-plus kg helmet. Something as sensitive as your neck and skull instantly identify and deal with the weight you ask them to bear. Three-hundred grams might mean very little to you if you’re benching or curling. But they mean everything to your head and neck when you’re wearing a lid.

And then there’s the fatigue issue. It’s not even science anymore. A lighter helmet obviously translates to less fatigue because your neck muscles aren’t working as hard as they would be to support a heavier helmet.

Now if that lighter helmet offered the same (if not better) impact absorption and spread in case of a catastrophe, then you have to ask yourself  why you aren’t wearing one.

Fair enough. Go back and stand in the Aldi cue with your bargain-price lid. Or better yet, keep shopping on-line for a good second-hand helmet. I’m sure there are tonnes around. Off you go.

The rest of you might want to know Airoh are made in Italy by Locatelli S.p.A, under the stewardship of Antonio Locatelli. The company, founded in 1986, once made helmets under contract for other brands, but in 1997, Antonio struck out on his own with the Airoh brand.

Put simply and honestly, I reckon they’re a stunning lid. And certainly the best thing I have put on my head since this really cool Russian hat made out of unethically-sourced mink I got for a birthday present one year.

Sure, they look good (and they must and they will because Italians are designing them), but they are also ridiculously comfortable (there’s that weight thing again). And unlike so many other top-end brands, the helmet you buy for yourself is exactly the same as the helmet they supply champions like Cairoli with. You go and try to buy the AGV lid Rossi is wearing. You can’t. It’s tailor-made for The Doctor alone.

Anyway, I must have made the right noises at David, because a few days later, Moto National, the importer of Airoh, sent me a box containing the most astonishing off-road helmet I had ever seen. 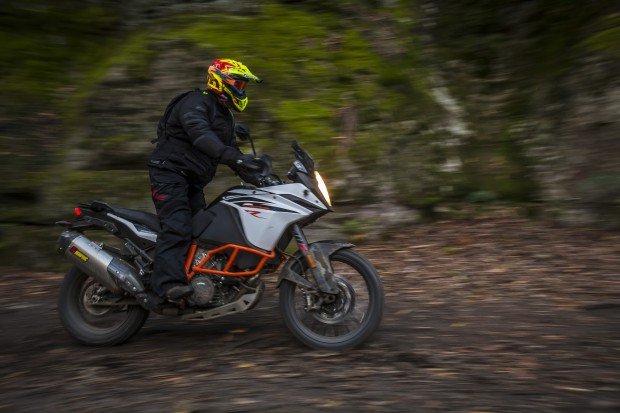 I may be lost, but I look fabulous.

It was an Aviator 2.2. But not just any Aviator 2.2. It was the fully pimped and limited edition Six Days created to commemorate the Navarra, Spain, ISDE. It even came with a numbered plaque riveted on the side. My number is 0952.

So while I cannot ride like Cairoli, I can certainly look the business. And when I’m parked up on some rocky bluff and staring into the distance contemplating the Hard Enduro I have just conquered, and people see me from afar, they will have no idea the Airoh-crowned majesty they are beholding will probably shortly fall down the cliff it’s resting on.

Clearly, the wind-tunnel stuff works. I saw some serious numbers on the speedo (on the road, of course) and the Aviator did not lift or try and strangle me. It performed better at high speed than some road-dedicated full-faces I have worn in the past.

On the dirt, where you’re leaking sweat and screaming, it was just superb. I cannot praise it enough. It’s an eleven out of ten. Possibly a 12.

And this is why. Each Airoh lid is created in a wind-tunnel, and utilises Finite Element Modelling (FEM) technology to test it for impact. The outer shell is then moulded from composite fibres such as aramid and Carbon Kevlar and layered manually. It is then assembled entirely by hand and closely checked for the slightest imperfections.

The Aviator is 100 per cent Carbon Kevlar and comes in three different shell-sizes. It is so well-ventilated you’ll think you’re wearing a sweat-band rather than a helmet. The peripheral vision is superb and expanded from the previous model. It comes with an extended and adjustable peak, cool spoilers front and back, removable nose-guard and dust filters, and an emergency cheek-pad release system. And of course the butter-soft lining is removable and washable.

But do yourself a favour and go and pick one up. Heft it. Put it on your head. Then pay the money and take it home. Sure, it’s not a cheap helmet. It’s just a great helmet.

(If you choose to get a non-limited edition one, then you’ll save a few bucks, you cheap bastard.)

WHERE CAN I GET ONE? If you go to the Moto National website HERE, you will find your nearest distributor.