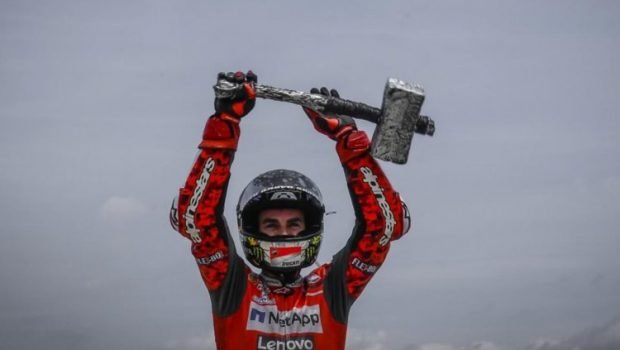 “Advise the Holy Father in the Vatican that he is not to wait any longer for the Jesus to return. It does not matter anymore. I have returned instead.”

You want to be crawling in here on your scabby knees, your eyes downcast, and your crazy eyebrows all groomed up to the shit.

My glory is undeniable! I am like a raging sea of triumphant butter being swirled into the thunderous heavens by a cyclone made of swirling hammers!

Such is the light that emanates from me that I’m not sure you’re even allowed to look at me lest you be blinded and have to spend the rest of your days doing sickly kaka in your beggar’s rags and rattling a tin cup outside some Roman ruin in Italy.

The only thing I regret from yesterday’s magnificent Puta-Slapping Conquest is the hammer I used to hit you and the others in Parc Firme was not a real hammer.

I think I will have to change that.

In fact, I’m going to change a few things. Here is a list:

Paint all of the Ducatis in Repsol colours so that my new team can see how much I cannot wait to join them.

Advise the Holy Father in the Vatican that he is not to wait any longer for the Jesus to return. It does not matter anymore. I have returned instead.

Ban the colour Puta Yellow from the Spanish flag and from the entire MotoGP paddock. The following Defeated Putas need to remove that piss-yellow stain from their bikes and riding gear – the little waiter from Thailand, the stupid Rabbit Puta, the Undead Puta Zombie Rins, the Monkey-Killing Killer with the wide spinning puta eyes who smells of English gravy, the Traitor Puta whose parents conceived him while watching that terrible Tommy Cruiser movie about pilots who shower together, the Swiss Banker Puta with the fake face-hair (The Swiss cannot grow hair! Everyone knows that, so I think he may be from Latvia), and that stupid Greek sex-dancer, Ximeon Xavieraki, who rides around at the back of the race looking at everyone’s culo.

Also, I went to see that sobbing pile of old-lady laundry who shares my pit garage (but not for much longer, Gigi!) and I tell him I want to help him.

I bang on his door and I say to him: “Open the door, weeping disgrace! I come to help. I have brought you a bucket. I have painted your stupid race number on it. Try not to crash again as you pick it up. You are to fill this bucket with your tears. When it is full I will come back for it and then I will wash my enormous private parts in those tears. But be warned! If your tears are too salty I will have you beaten with knotted ropes. Then you will really have something to cry about!”

Gigi, you should get some knee pads. You will be spending a lot of time on your knees for the rest of this season. And I need your knees to work for when you carry me on your back to and from my motor home.

I’m just trying to help you. I cannot have you slacking off now that you know I am leaving to become a Repsol. So it will be business as usual for you and those soon-to-be-unemployed gypsies you have filled my pit-garage with.

This is Sparta again, Gigi! A new, buttered Sparta that smells of victory, and resounds with the wailing of the many-legged Yellow Puta, who will soon be back on his dirt farm farming his dirt. He cannot grow enough legs to ever defeat me again.

I would like a back-rub now, Gigi. Make sure your hands are clean and smell of the frangipani.