When he rounded me up on Turn Three like I was a used pair of fat underpants and left me gawking as he fried his rear tyre most of the way to Turn Four, I was still no clearer as to who he was.

He was clearly someone who could ride heaps faster than me, but there are lots of people in that group and it doesn’t make him special.

I guess what made him a little special was that he apologised for passing me.

Um, yeah. The Number One plate. Over there…

“No dramas,” I said to him. “It was actually quite a treat to see someone riding as hard as that. I’m just pissed I couldn’t watch you for any longer. Still, I did get to see you again when you lapped me.”

And Sloan was fun to watch. His body language was pure aggression, and he really did look like he knew what he was doing on that Suzuki.

I still had no idea who he was, though, and figured he might be a journo from some Kiwi bike mag I’d not heard of, like Ewe-Herders Galore, or Fast Farmers.

He sounded sincere, but I didn’t even blink.

“Mate, I have been passed by everyone in this pit garage. Chris Vermuelen, Kevin Magee, Cam Donald, Mark Willis, Steve Martin – the job lot of them have hosed me out there. I don’t scare that easy.”

He nodded. Maybe he’d been passed by them too.

He smiled and actually looked a little shy.

He nodded. “I’m the New Zealand Superbike champion,” he muttered.

And of course he was.

And of course I felt pretty stupid.

But Sloan never held it against me.

Then I started bumping into him at the 2017 ASBK rounds.

But he wasn’t spectating. He was racing.

Sometimes he was sleeping on the floor of his pit garage.

But when he was awake, he was out on the track coming 458th.

Or not out on the track because his bike had stopped co-operating, or being held by government officials in some yard, or in pieces on a ute.

I was suddenly intrigued.

Here was a bloke who has won three New Zealand Superbike crowns. And yet, when he came across the ditch to have a go at an Aussie title, it looked like he was just making up numbers.

Sure, our ASBK line-up is a who’s who of fast bastards, gunslingers, heartbreakers, and steel-eyed podium-chasers, but Sloan was still a player. Surely.

A player… or a masochist of epic proportions.

Either way, I felt it was worth having a chat with him. Hell, any bloke who gets on a plane with race slicks as luggage has got to be worth an interview.

Besides, I’m a huge fan of Kiwis. If we were Americans, they would be our Canadians, ie. Nicer, calmer, better adjusted, and heaps friendlier. 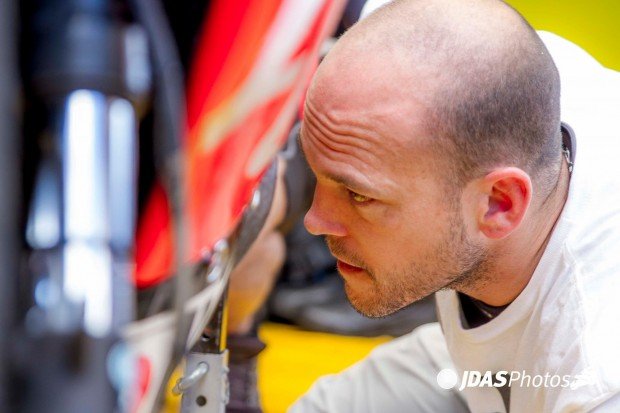 “I can fit another cylinder in there…”

Boris: So you’re back again, huh? Have you ever killed a Chinese person, broken a bunch of mirrors, or had much to do with black cats?

Sloan: Not a Chinese person, no. I always take my mirrors off and I am allergic to cats.

Boris: Mirrors would be no good to you since there’d be no-one behind you to look at anyway, huh?

Boris: So if it’s none of those things, what do you attribute your misfortunes to? Because you strike me as being away on the day Luck was being dealt out.

Sloan: I have always given luck more credit than it deserves. I have recently realised that it’s the people you have surrounding you and the preparation you put in that ultimately determines your level of “luck”.

Boris: Gee, you sound like you owe someone money. Which of these do you see as the biggest thing holding you back from winning an ASBK title? Slow lap times, fear of goannas, upsetting Allerton, too many colours on your helmet, or an inability to pronounce the word “chips”?

Sloan: I have got the lingo down, I just reckon Kiwis are more efficient when we talk. Just don’t pronounce your vowels and you too may be in the running for a MotoGP announcer job like our very own Simon Crafar…

Look, Australia has never really worked out that successfully for me. I think the problem is the riders are too bloody fast, angry, crazy and fit!

Sure I can always make excuses, I am flying in, picking up my bike and van that has been left from the previous round, working all night then going out late and continually running around playing catch-up. But up to a point though this is just my mental weakness and that is the difference between a Top Five finish and a Top 15 finish. 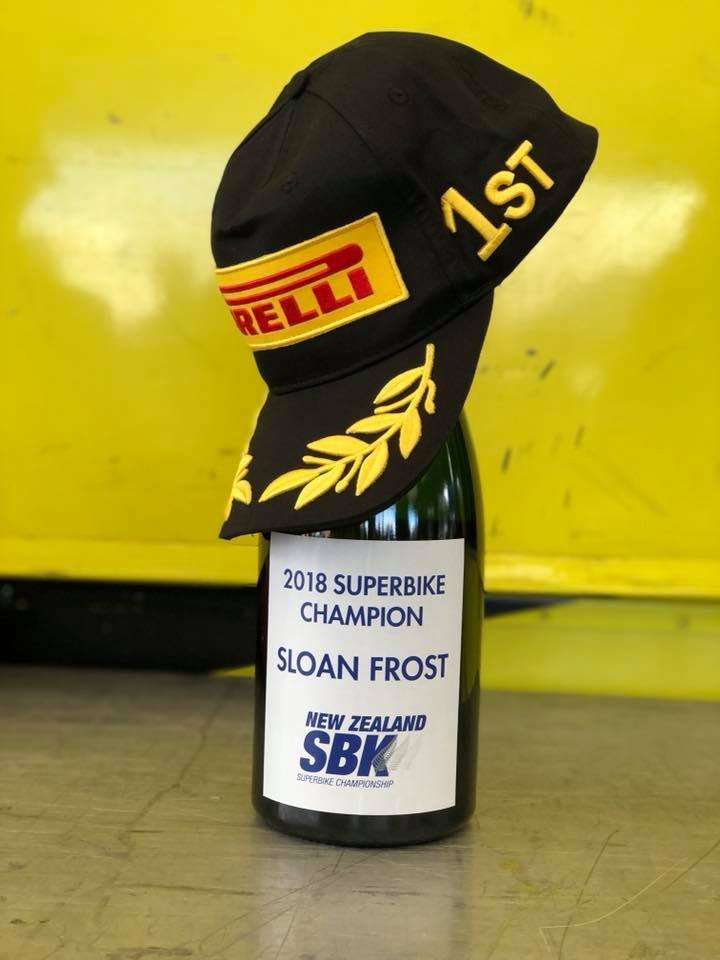 Boris: But you’ve won the Kiwi title how many times?

Sloan: I have won it three times…but it got taken off me this one time…

Boris: Maybe you’d have more success on a Royal Enfield.

Sloan: Well, I might be able to stay on the thing.

Boris: Yeah, they aren’t all that quick. But they’re all retro. You could grow a beard and put pomade in it. Smash some avocado. Maybe exhaust wrap is the way forward?

Sloan: I’m not sure I even know where this is going…

Boris: When you win an ASBK title you’ll be able to pick who interviews you. Until that happens, it’s me. Shut-up and answer the questions. When you come through customs do they strip-search you with gloves and lube? Is that really why you keep coming back? Because it sure isn’t winning races that’s doing it.

Sloan: I certainly get some crazy looks and pissed-off baggage handlers, but I can confidently confirm you can get 90 per cent of a superbike into three Ogio bags, and two rear and three front tyres just makes the 23kg luggage limit. I am eagerly awaiting the cavity search they promise on all the signage.

It looks like a freshly ploughed field just past the track.

Boris: I will make some calls. Make that happen for you. Do you have a name for your bike?

Sloan: I had a name for the bike I just sent back to NZ. Some of my competitors even started shouting my bike’s name at me in Tailem Bend when it was blowing clouds of blue smoke. I have a brand spanker for Darwin, I think I’ll call it Sue.

Boris: Sue is a great name for a bike. But just so I’m up to speed, what’s gone wrong for you so far in this year’s ASBK campaign and are you looking forward to more of the same?

Sloan: It’s just been hurdle after hurdle and I just can’t catch a break. Customs didn’t release my bike for Round One. Round Two clashed with NZSBK. My bike got held up in Customs again before the Adelaide test and when it finally arrived I thought I had to set the lap record on Lap Two and destroyed the bike. So we worked all night and arrived back for the round and in the first practice an oil line that was damaged in the previous crash blew, pumped out all the oil (completely contained btw) and blew up the engine. 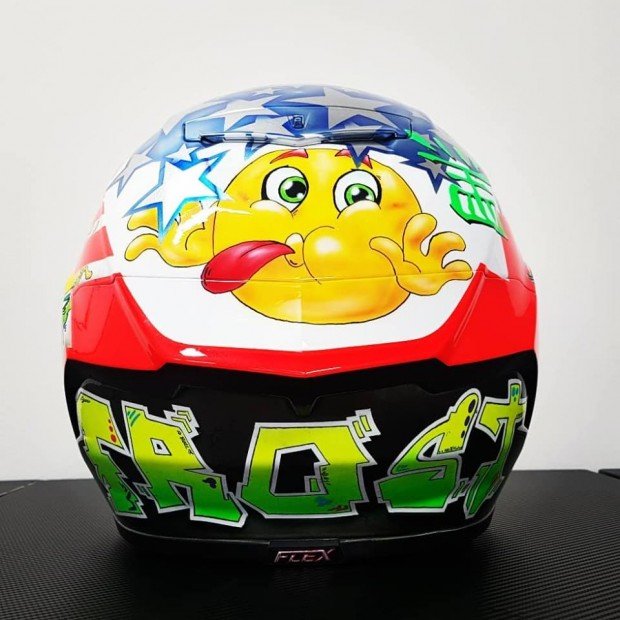 This is what they will all see when Sloan is leading. Just sayin’…

Boris: It clearly sucks to be you so far this season, huh? So when you come home to NZ having disgraced your nation and shamed your ancestors, do you spend some time soul-searching, or do you just go out on the piss and hope to forget the horror?

Sloan: I am lucky I don’t often drink, but the first person I see when I get home is my wife who is pregnant and has just spent five days looking after our other two crazy little boys, paying the bills, and answering my phone calls. And bringing home a 15th place does not ensure a warm welcome.

Boris: What do you do when you’re not racing bikes? Apart from crying, I mean?

Sloan: Look, that was just once, it was raining, it was cold and my visor was fogging…

I have a company that installs air conditioning, so it’s big time catch-up when I get back. Two boys and a wife who are craving attention, and then when no-one’s looking I’ll be out doing Motos in my KZ2 Kart, riding my Motocross bike, or hiding in my garage restoring some old MX bike for my collection.

Sloan, third from left. The other blokes are blokes who wish he went faster.

Boris: Yeah…not much Training To Win The ASBK Title going on there. Is there any point in even asking you what track you’re going to do well at?

Sloan: Hands down Darwin. I have only ridden there once and didn’t do particularly well, but the event rocks. The weather is beautiful, you feel like you’re on holiday, the crowds turn up in force, the track is easy and fun. My father comes to this round because he is the poor bugger that drives my van all the way up and back. Dad’s not one to hold back with his constructive criticism though, much like my wife…

Boris: Yes, well, you are a target-rich environment. Here. Let me help you feel better about yourself. Do you remember coming around the outside of me in Turn Three at Phillip Island at the Suzuki GSX launch? I was pretty shit wasn’t I?

Sloan: It’s nice that you know how it feels for me to ride with the likes of Maxwell, Allerton and Waters.

Boris: You’re determined to make a name for yourself in Australian road-racing aren’t you?

Sloan: Well I think I have already made a name. I’d just like to change it a little. The series is so strong this year; a top 15 is a respectable finish but I know I have the ability to challenge for a top 5. If I can just finish the first practice session in Darwin without any drama I will be in a good space.

Boris: Do you think the way forward is maybe being the first trans-gender racer?

Sloan: Hahaha! Well I have been doing a bit of kart racing lately and had my arse handed to me by a pretty little girl. That didn’t go down well. Have you seen how fast the girls are these days? I think going through all that drama and getting my arse kicked by Avalon Biddle who can’t even reach her handle bars on a 600 would be a very good reason to reconsider my drinking habits…

He really does know his business.

Boris: Thanks for the chat and good luck in Darwin, mate. I’m going to call you afterwards and see how you went.

Sloan: Easy as. Thanks.