In 1977 I owned a Kawasaki Z1-B, the third model of the first Japanese 900. I was 20 years old, I worked for Kawasaki, and I rode my bike every day from my home near Fairfield to Kawasaki’s office and warehouse at Granville.

Tuesday January 18 was a beautiful Sydney summer’s day. I left for the office about 7:30 am, enjoying perfect weather while astride the primo road burner of the day. I’d worked out the best back way to work, with not too much traffic and a few corners where I could work on the brake pedal chamfer.

At 8:12 am I was in Granville, less than two kilometres from the office, when I turned left on to the Bold Street Bridge over the railway line.

And the bridge collapsed.

It snapped in the middle and the two sides went down in a big V shape. All of a sudden, the road went from being horizontal to sloping down at a 30 or 40 degree angle. It made noise. The brick ramparts at the side of the road were crumbling, and large chunks of masonry were rolling about in front of me on their way to the bottom of the V. I was full of adrenalin in the first two seconds, and everything slowed down while I got hard on the brakes and steered among the chunks of brick wall rolling around me. The air was full of brown dust from the bricks snapping. 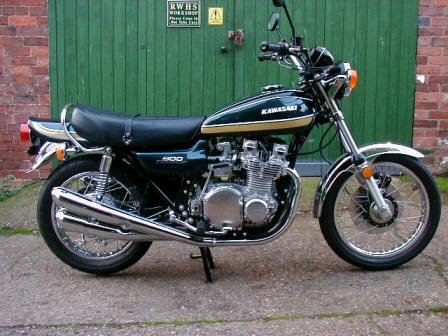 I stopped at the base of the V, on a bit of concrete that was almost horizontal. I put my right foot on the ground. I put my left foot on the side stand. I looked up. A brown HQ Holden in front of me was rolling through the dust backwards down the slope from the other side.

I fell off the bike to the right. The HQ Holden stopped rolling with its rear bumper over the front wheel of my dropped motorcycle. My right knee was sore. The brown dust started to settle. I didn’t expect it to be brown.

I stood up. I figured I wouldn’t be riding the bike out of here. I took my helmet and gloves off and put them on the ground. I looked around.

Al came down from the left of the photo, and that’s his bike on its side at the bottom. The brown HQ Holden is on the way out by crane here.

There was a train sticking out either side of the bridge. People were starting to get off the train. I was in a mild state of shock, and it didn’t occur to me that there would be people on the train under the bridge.

There were sparks where the train power wires had hit the ground and were grounding out. My motorcycle was leaking fuel from the filler cap.

I didn’t want a fire as well. I tried to pick the bike up. I couldn’t move it back due to large chunks of bridge rampart behind it. It weighed 572 pounds dry. It wasn’t dry, and there was a brown HQ Holden parked over the front wheel. I walked up the sloping concrete slab to the car. There was no-one in it. The driver, correctly assessing the likelihood of theft as low, had left the keys in it.

I got in it and started the engine, put it in drive, moved it forward a metre or so, put it back in park, put the brake on and switched it off.

Then I got out, picked up my bike, and put it on the side stand. It stopped leaking petrol. It started leaking oil where the brake lever had punched a hole in the clutch cover.

Behind me, the road had a drop of about half a metre to the start of the slab I had just ridden down. There was another car with its rear wheels still on the road and the rest of it hanging down at maybe a thirty degree angle. There was a little old lady in it, pressed up against the steering wheel.

Some butchers from the butcher’s shop across the road had come out to help. They were still in their striped aprons, with big scabbards full of knives. One of them had backed a panel van with a tow bar up to the bridge, and tied a rope to the tow bar. Another was hanging on to the rope and trying to help the little old lady out of her car.

I got up the slab a bit and gave him a hand. Then I got back up to the road.

The first copper arrived. On a motorcycle. He put his bike on the side stand and went down the slab.

The butchers were still thinking fast, and still helpful. One of them called out “Don’t worry mate! Chuck her in reverse and we’ll bounce you up!”

More police and ambulances arrived. There were no mobile telephones in 1977. There were big queues at the local public phones. I joined one of them.

I called my parents. I said “I’ve been in a big accident. You’ll probably see it on the news. Don’t worry, I’m OK.”

I called the office. I said “I’ve had an accident. I’ll be late”.

I came out of the phone booth and noticed one of the guys from the office in the crowd. He appeared to be bothering a policeman. He saw me and explained that his sister and cousin were on the train that had derailed and brought the bridge down. He was at the office and heard about the train crash on the radio, so he grabbed a Z650 demo and came up to try and find out if they were OK. I said “Paul, they won’t know anything until they’ve got the situation under control. Leave them alone. And would you mind giving me a lift back to the office?”

My helmet and gloves were still at the bottom of the bridge. The police had the area locked down by now, and there was no way I was going to be allowed back down the slab.

I got on the back of Paul’s Kawasaki Z650. Paul was pretty upset, but it only showed in his throttle hand. We crept through the cars queuing on Parramatta Road and got to an intersection where the lights were out. The wires that controlled them must have snapped when the bridge went down. There was a cop on point duty. He was signalling us to stop.

Paul saw a gap, gave the Z650 six grand and dropped the clutch. We went across the intersection on the back wheel. I was holding on to the grab rail with one hand and had my other arm over my uncovered head. I put it over my head again when the pipes kissed the ground on the last corner before the office.

I went in. Someone made me a cup of coffee. People were asking me what happened, and I was trying to tell the story and stop the coffee cup from shaking. The general manager was one of them. After a while he said “Can you come into my office for a minute?”

I went in. He fiddled around in his drawer. He said “I understand you’ve had a bit of a shock. ” He pulled out a small pill bottle. He said “Have some of this.”

“Serepax.” he said. “They’re pretty strong. I’ll give you half”.

I knew about Serepax. “Make it one”, I said. He gave me one.

Everything got kind of fuzzy after that. Not much work got done that day. The radio stayed on all day. There were rumours flying about, including one that a motorcyclist had died. I figured that a reporter had seen the helmet and gloves at the bottom of the bridge and leapt immediately to the conclusion that I had taken my helmet and gloves off, walked off and died somewhere.

I don’t remember going home that night. I hope someone drove me. I remember watching the news. My Z1 was being pulled out of the wreckage by a big Fire Brigade crane.

The next day, Wednesday, I went up to the police command caravan near the bridge and asked for my bike back. I showed them my rego papers, demonstrated that my key fitted, and they gave it to me without any paper-work requirements. I rode it to work, and the guys down in the assembly department put a new clutch cover on it and topped up the oil. The manager said no charge. Cool.

It took until Thursday night — nearly three days — before they finished getting everyone out of the train. The section of the bridge that collapsed weighed three hundred and eighty tonnes. Where it hit the train, the height of the carriages was reduced to 50cm. Some people had to have limbs amputated to get them out. Others were trapped for more than two days. Priests were crawling through the rescue tunnel, administering last rites.

Eighty three people died. Two hundred and thirteen were injured. It was the Granville Train Disaster.

I was the only one on a motorcycle.

I walked away from it. 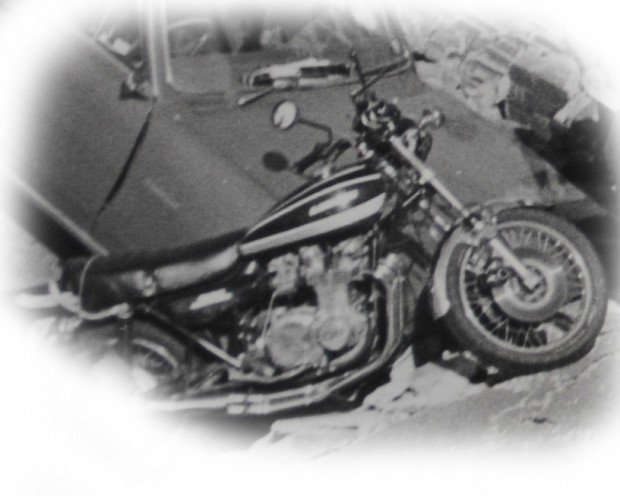