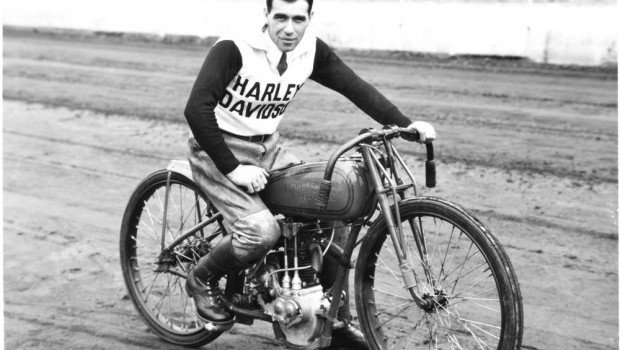 THE HISTORY OF HARLEY-DAVIDSON PART TWO 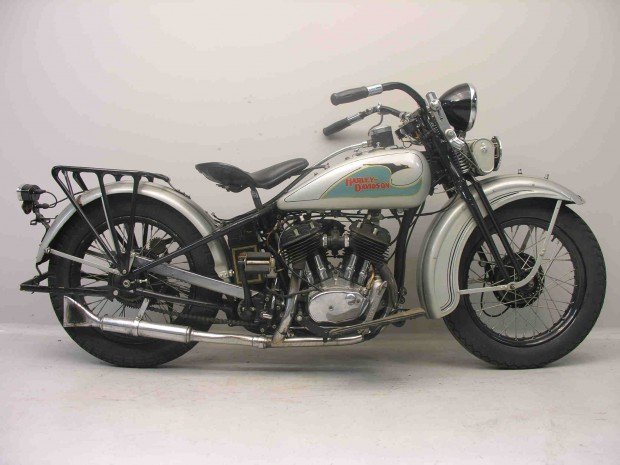 BORN TO BE WILD PART II

HISTORY BOOKS refer to the 29th of October, 1929 as Black Tuesday. That was the day the Great Depression came to the USA, and as Wall Street stocks crashed, the stockbrokers who traded in them likewise crashed into the pavement beneath their office windows.

Harley had just launched its 45-cubic-inch motor in August and was busily making some 21,000 of them to meet the anticipated demand, when the bottom fell out of…well, just about everything everywhere. Sales emulated the swan-diving stockbrokers and by 1933 Harley-Davidson were pushing to sell 4,000 bikes.

Still, neither the Harleys nor the Davidsons were the kind of people to throw up their hands in surrender when confronted with a global economic downturn. They proceeded apace and started converting some of their bike engines to industrial purposes. They also managed to design something entirely new – the three-wheeled Servicar, which was used for police work (issuing parking infringements) and delivery purposes (it was cheaper to run than a truck) and remained in production until 1973. 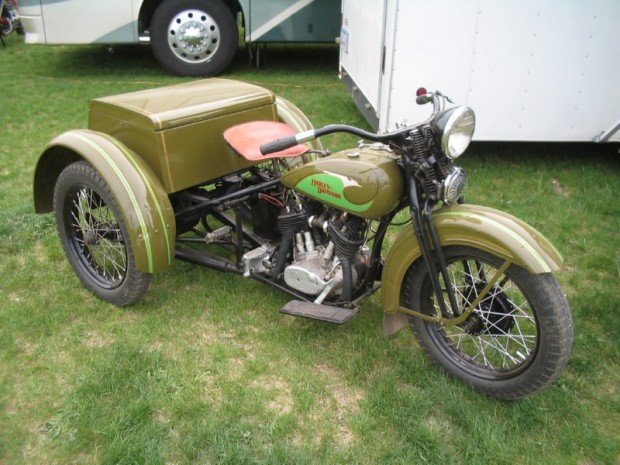 Economic factors doubtlessly played a part in Harley-Davidson discontinuing its single-cylinder engine, and the mid 30s saw the painting of the now ubiquitous eagle symbol on all the models and the production of an 80-cubic-inch Flathead motor.

Then in 1936, with production once again climbing to just under 10,000 bikes, Harley-Davidson produced a new engine, quickly dubbed the Knucklehead for the resemblance its valve covers bore to a clenched fist. These OHV dry-sumped donks featured a clever re-circulating oil system, which was subsequently included in their Flathead motors. A great and mysterious re-naming of models then followed; the 74-cube V and VL motors became the U and UL motors, the 80-cube VH and VLH became the UL and ULH (which is still a hugely desirable motor among restoration enthusiasts), and its little 45-cube RL became (thanks to the onset of WWII) one of the most famous bikes Harley-Davidson ever built, the WL.

Only two American bike manufacturers survived the Great Depression, Harley-Davidson and Indian – largely due to the fact that they supplied the US Army. And as the Germans overran Europe and Japan girded its loins for war in the Pacific, Harley-Davidson placed its entire output of motorcycles at the disposal of the US government. 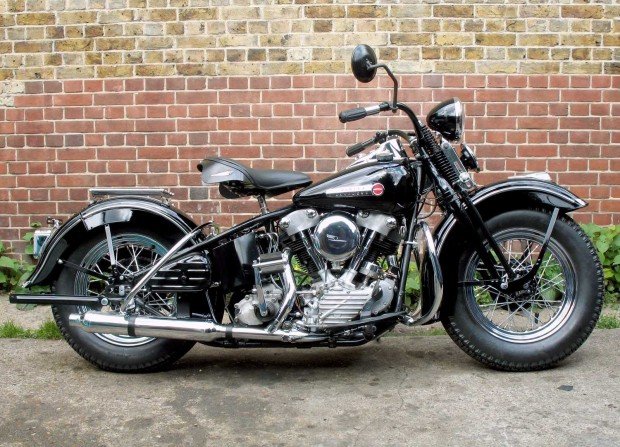 One of the prettiest bikes ever built

By the end of the war, some 90,000 WLAs (the A was for Army and WLC (the C was for the Canadian version) had been made and sent into battle all over the world – the US even provided some 30,000 units to the Soviet Union under the Lend-Lease program. Their rusted skeletons can still be found all over the Pacific theatre and following the path of the Allied advance from Normandy – while immaculately restored versions can still be seen in great running order all over the world. Interestingly, while production of the WLA stopped shortly after the US nuked the Japanese, it kicked off again when America decided to halt the communist menace in Korea and production of the WLA resumed between 1949 and 1952. 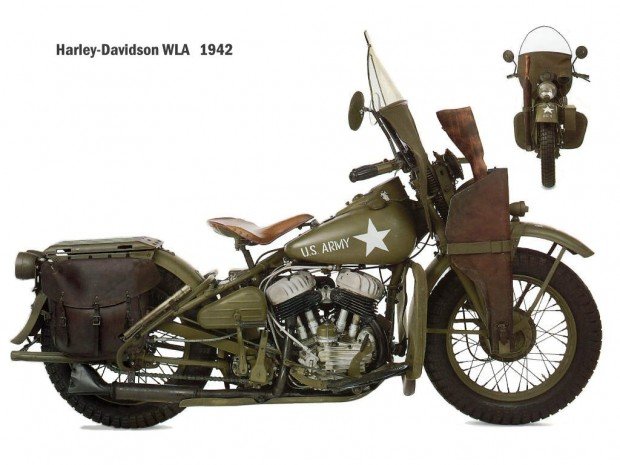 They see me rollin’, they be runnin’

The Willys Jeep ultimately replaced the WLA as the US Army’s vehicle of choice in the closing stages of the war (you’ll remember the USA was kind of a late starter anyway) but that (typically) didn’t stop the army on insisting that Harley-Davidson take a leaf out of the enemy’s book and make a bike that was better suited to the military’s needs.

Thus was born the only shaft-driven motorcycle Harley-Davidson has ever built. Dubbed the XA, it debuted in 1942 and was basically a copy of BMW’s robust 750cc R71. This bike ran a whopping 55 degrees cooler (it’s horizontally opposed twin-cylinder motor with its pots hanging out each side, ideally lent itself to that), but the XA never reached full production and only about 1000 were ever made. 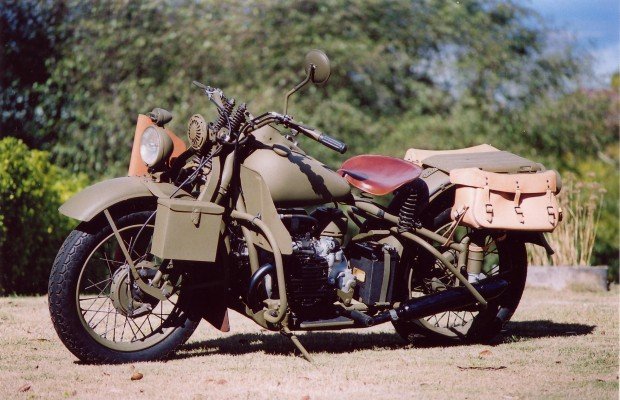 War reparations were all the rage at the end of hostilities. The Soviet Union got eastern Europe, the USA got the Pacific and Harley-Davidson scored the design of a small German bike from the DKW factory, the RT125.

It re-labelled it the Hummer and they made them from 1947 until 1966. But that was just a small sideshow compared to what else the factory was up to.

Servicemen in their thousands were streaming back to the US and Harley-Davidson had the Panhead ready to roll in 1948, probably to go with the leather motorcycle jacket some sources credit the factory with introducing in 1947.

Featuring sexy new aluminium heads (with covers that looked like inverted pots) and hydraulic lifters, this 74-cubic-inch beauty (it also came in a smaller 61-cubic-inch version, but they stopped that nonsense in 1952) captured imaginations and reliability trials all over the US.

A total of 31,163 Panheads rolled out of the factory, which had acquired new manufacturing premises in the Milwaukee suburb of Wauwatosa, and was in the grip of major expansion and marketing. 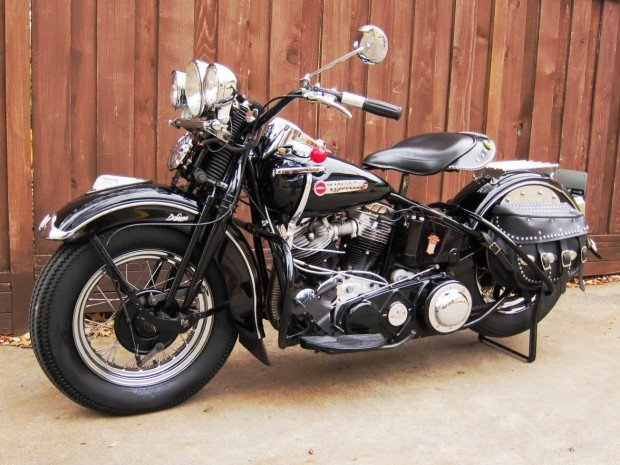 The immaculate Panhead. Kel? Are you touching yourself?

Life, apparently, was good for everyone in the USA in those heady years.

But change was coming – both social and economic. The world was about to get a lot more complicated, and Harley-Davidson was entering a period in its history enthusiasts still curse to this day. Paradoxically, it was also the time when Harley-Davidson would acquire an image that would ultimately sell it more motorcycles than it could have ever dreamed of, making it a cultural icon unrivalled by any other vehicle manufacturer in history.

American Machine and Foundry (AMF) was about to enter the picture, as was the outlaw motorcycle rider. 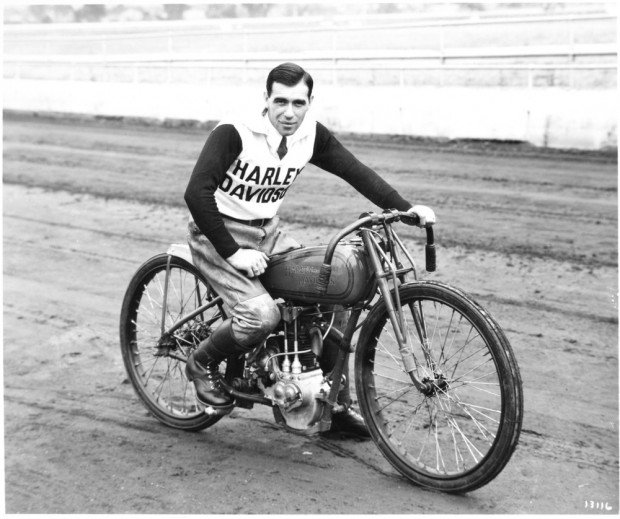 Joe knew what the ladies liked

It’s probably hard to equate today’s hefty, but gleaming, chrome beasts with any kind of racing heritage, but Harley-Davidson was a dominant force for decades.

From 1929 to 1936, factory racer Joe Petrali won every single National Hillclimb Championship in the USA. Then between 1931 and 1936, Joe amassed the most points in a national racing series. He actually managed to win all 13 rounds in 1935, and then set a speed record in 1937 by hurling a 61-cubic-inch bike down a hopefully empty Daytona Beach at 136.183mph.

The war interrupted the factory’s racing schedule, but it was straight back into it once the unpleasantries were over. Harley-Davidson won three successive AMA Grand National Championships from 1947 until 1950, when it also took out 18 of the 24 National Dirt Racing Championship rounds.