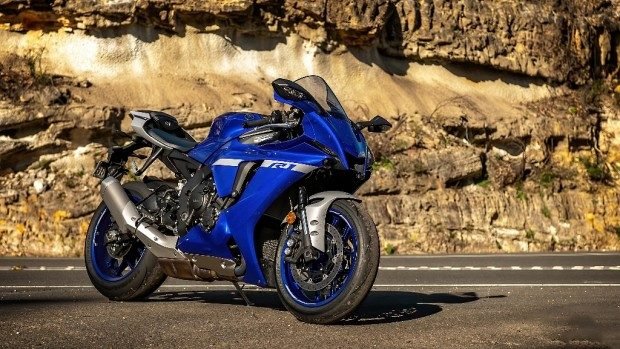 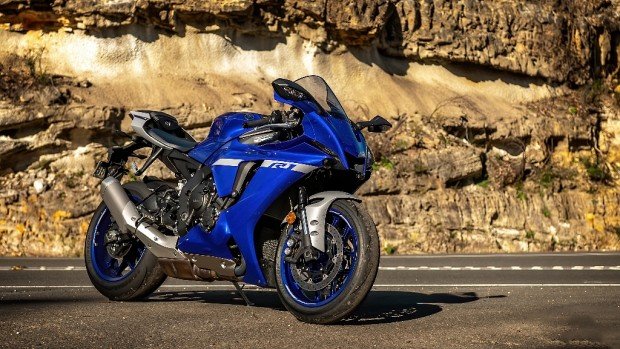 Come and play the Blues.

Ask anyone about me.

They’ll tell you I have no business riding a superbike. “Too old, too slow, too fat, too scared, blah, blah, blah…”

And they’re right. I am all of that. And so are 99.99 per cent of road-riders and those apes pretending to be motorcycle journalists.

So that’s almost all of us then.

One big happy family of incompetent wobblers, all craving a Viking funeral, but for whom riding a bike like the latest Yamaha R1 to anything approaching its stellar limit is nothing but a dream made from dust and longing.

That said, it’s not like I’m NOT gonna ride one when the opportunity presents itself.

So now and again, I heave my broken old body onto one of these things and have a crack. 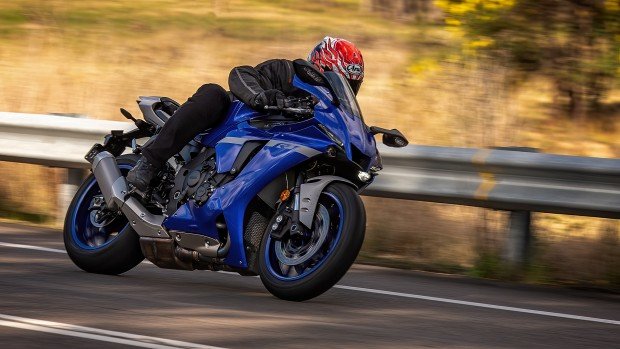 No-one’s gonna mistake me for Haga.

I’ve been fortunate enough to essay a few laps on Daniel Falzon’s ASBK R1 race bike, which provided tonnes of amusement for everyone involved, including me. So I know what I know [No arguing with that – R1].

Yamaha, whose sense of humour is deeper and richer than the fabulous blue colour it paints its weapons with, sent me an R1 not long ago.

I jizzed a bit, for it was beautiful – in that intently vicious way some bikes have [Aw, you say the nicest things – R1], and it was as pregnant with terrible promise as a killer whale with a belly full of baby killer whales.

It sat in my garage for a few days, quiescent, silently storing its 200 horses and 113Nm of torque inside its 200kg-wet assembly of exotic metals, plastics, and computers. 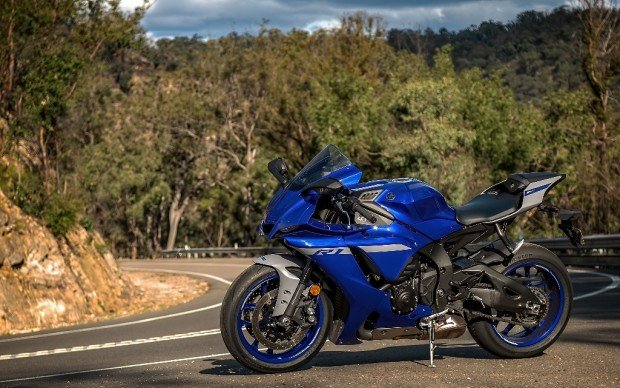 It is its own storm cloud.

We would look at each other often. Well, I would look at it, and it would just blank me in that insouciant way such weapons have. I’d walk past it, give it the eye, grab a beer and leave the garage [Yeah, you just keep on walkin’, chief – R1].

The brochure will tell you its sinful new lines offer a 5.3 per cent increase in aerodynamic efficiency when you’ve plonked your chin on the tank and are hurtling towards a new lap record at Laguna Seca. And its smoother about the upper thigh area so your legs don’t get as bruised when you’re dragging your elbow through Misano’s Carro corner.

But I knew what to expect. 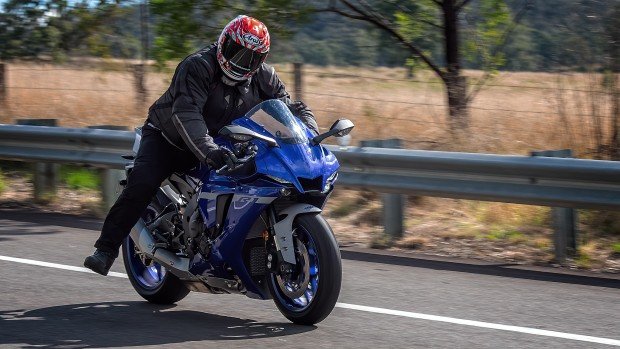 Valentino does this to slow down from 760km/h. I get it.

I know what this superbike business is all about.

These litre missiles, of which the R1 is a truly magnificent iteration, have morphed over the years.

Once, they were a bike you could ride, and use to commute or tour, and maybe carve the odd track-day on.

But since the R1 and its ilk are what the factories build when they wish to show off the pinnacle of their bike-building art, it stands to reason these bikes eventually and inevitably become edgier and more track-focussed – and less about bunging on a Ventura rack and going touring. 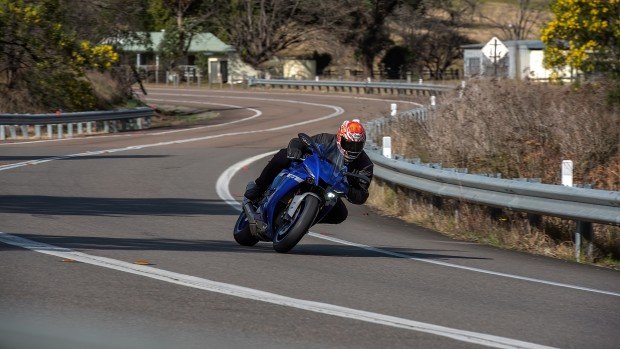 Of course, you can, and indeed, you should do just that, because riding bikes is not about being rational, is it? [Oh go on. I dare you. Take me touring – R1]

But let’s face it, there are better bikes for that purpose. [Lies! Don’t listen to him! – R1]

There are, however, no better bikes for going fast.

And that, beloved readers, is what the Yamaha R1 is ALL about.

It understands “going fast” on a level you would struggle to comprehend. And not only does it understand that, it excels at it, even if you do not [Flatterer – R1].

Which I found very comforting [At least one of us knew what it was doing – R1], even as the ride position brutalised my broken old body into uncomfortable compliance with this year’s racing crouch. 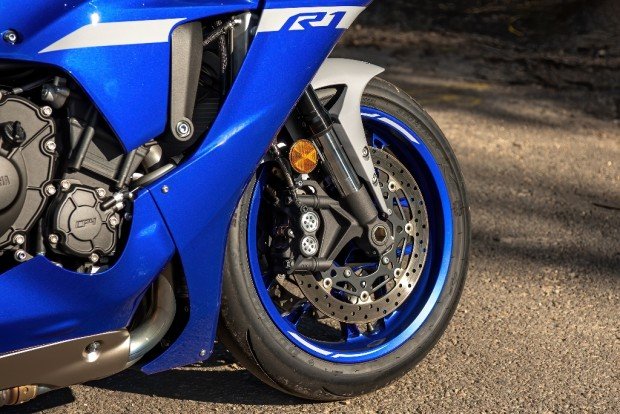 The only thing that faded here was my soul.

Interestingly, once you are engaged with putting the R1 through your best paces [’Cos you’re so not putting me through my best paces, Nancy-pants – R1], that race-crouch anguish disappears. And all there is is another apex, another hard-braking zone, another hard throttle opening, and endless long moments of breathless, dry-mouthed, and wide-eyed amazement such a vehicle is even legal.

Thrice did I fire the R1 up and down Mother Putty, and once I took it up through Wollombi. Both roads provided me with all I needed to know about the R1 and my own failings.

Did I enjoy it? [Well, you did make a lot of squealing noises – R1] 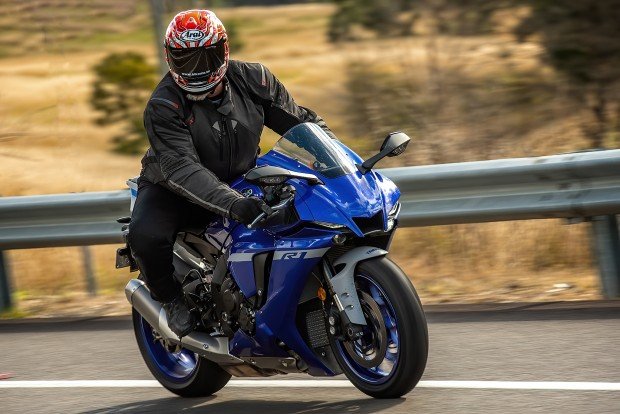 “How many more laps, bastard? Stop laughing and tell me!”

That might not have been immediately obvious to a casual onlooker at the Grey Gum Café as I fell off and into the dirt beside the parked R1, so I spent a few seconds on my knees beside it to look like I was worshipping it.

What can I tell you? It’s a race-bike. Of course it is. But it’s got lights, blinkers, and a numberplate, so you can ride it on the road.

It has a plethora of high-end electronics which let you adjust the engine-braking three ways (presumably “Oh God!” Oh Great God!” and “Oh Lord Take Me Now!”). 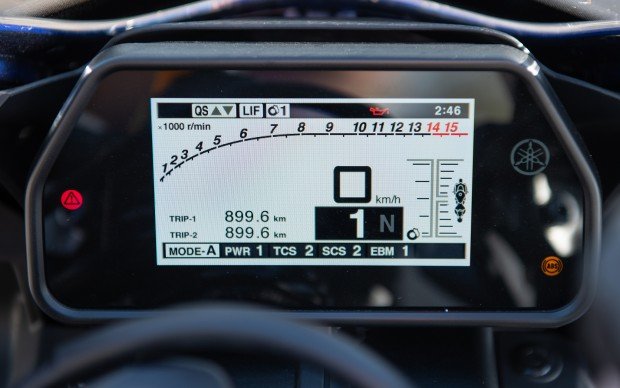 Don’t worry. You’ll work it out.

There are a total of seven electronic rider aids (the engine braking, the wheelie control, the I’m Rossi button, the I’m Faster Than Rossi Button, the ABS Can Eat Me button, the Let Me Screw Some More With The Brakes button, and the Traction Control Is For Pussies button – as well as a bunch of engine modes. It is indeed a most sophisticated suite of Not Dying Of 200hp Today electronic aids. 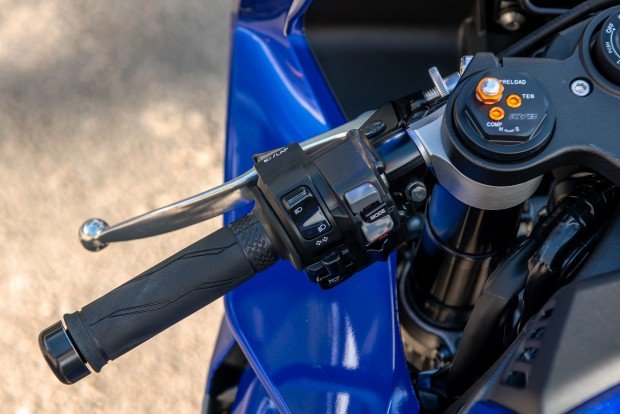 If you had hands, these would fall easily into them. Ask anyone.

I did not delve too deeply into this morass for fear the R1 would mistake me for Fabio Quartararo [In your dreams – R1]. But I found the B engine mode and a bit of traction control the most workable. I tried A mode briefly before telling myself I had no need for a throttle that worked like an eye-blink, while C made the whole thing feel a tad…well, muted. Yamaha has put an all-new Accelerator Position Sensor with Grip (APSG) on its 2020 R1 in a bid to give the fly-by-wire throttle a more cable-like feel. I cannot speak to this, other than to say it felt fine, ie. I’d twist the throttle and the horizon would hit me in the face [It’s what I do – R1].

Riding this thing is…well, let’s face it, it’s a hoot. 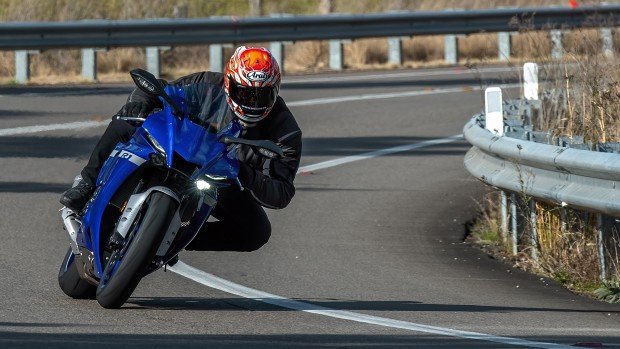 Inside my helmet I am making hooting noises.

Your inputs are absorbed and addressed upon the instant. If you’ve never ridden a superbike with a some venom in your heart, you might find yourself turning into corners a little too early. Don’t [He’s right. Don’t – R1]. Corners don’t need to be planned. They need to be carved. Don’t worry, those Bridgestone RS11s are made out of gluey liquorice and are better than you’ll ever be [Some credit here, please. They’re not doing it on their own, you know. – R1].

Pillion accommodation? My wife took one look at it and said: “Shut up, idiot. Do I look 18 to you?” 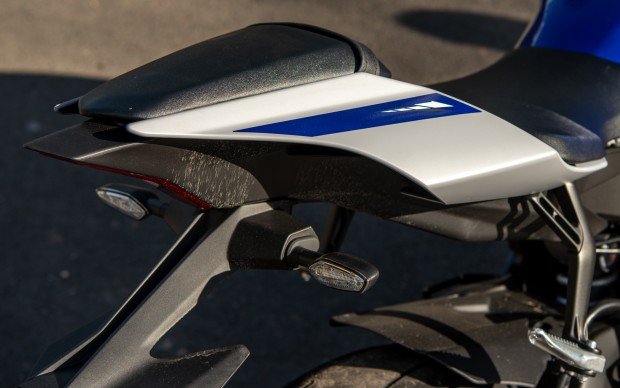 Can you blame her?

There was no right answer to that question.

My favourite bit was that engine. It has been since Yamaha did that crossplane crank thing to its guts.

Nothing on this earth sounds like an R1 being lashed. It does not sound at all like an in-line four. The song of its people is a tearing, thrumming, symphonic yammer that speaks of nothing but speed and power.

And that’s precisely what the R1 is all about. Speed and power, lashed into obedience by a bunch of ECUs, and constrained only by your skill [Sounds about, right – R1]. 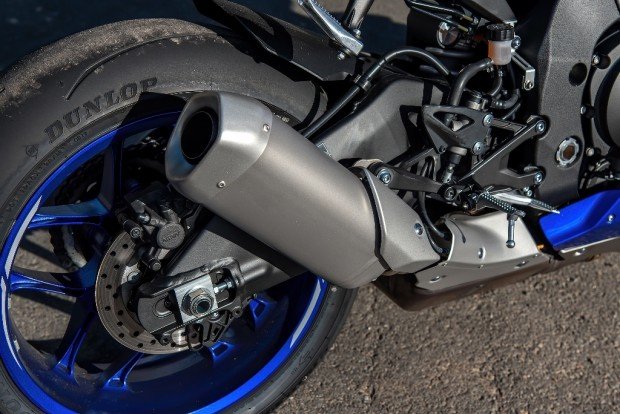 Probably one of the least hideous stock mufflers I’ve seen. Throw it away anyway.

There are two versions. The base YZF-R1 and the YZF-R1M. The price difference is substantial. The R1 is $26,549. The M is $34,999. What you’re paying all that extra money for is carbon bodywork and legitimate Öhlins electronic race suspension with new NPX anti-cavitator gas front forks, presumably so enemy submarines won’t hear you. [You lie – R1]. 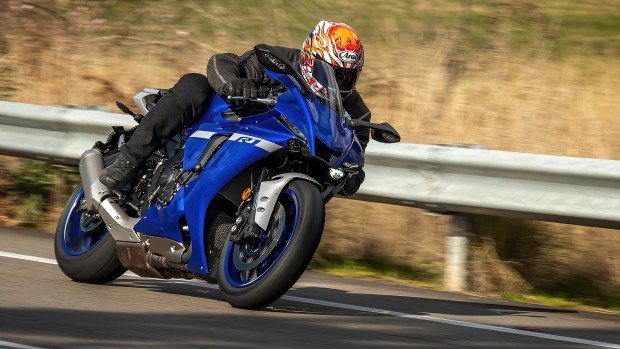 I’m kidding. Simply put, cavitation occurs when a smidgen of the damping oil in the forks briefly morphs into vapour because a vacuum has been created. Presumably this has occurred when you’ve been striving for a podium against Marquez at Catalunya. I doubt it will ever happen to anyone on the road and to very few on the track. But imagine peoples’ faces when you tell them this over a cold beer as they’re looking at your new R1M. I would so be talking that up. 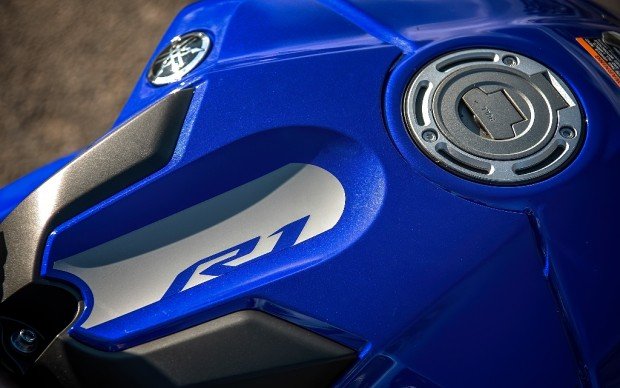 I assume one puts one’s massive phallus in this area.

So whether that is worth the extra bucks is only something you can decide. I doubt anyone would find the base R1 lacking in any way, shape or form. But NPX anti-cavitator gas front forks? Man, that is some funky bastardry right there.

As I said, the base R1 lacks nothing.

It is a superb example of Yamaha’s ability to build world-class, race-winning motorcycles that pass into legend with each incarnation. It might go like any old superbike [And who’s gonna find that out, chuckles? – R1], but it doesn’t sound like anything else. It is unique in the world of in-line fours. 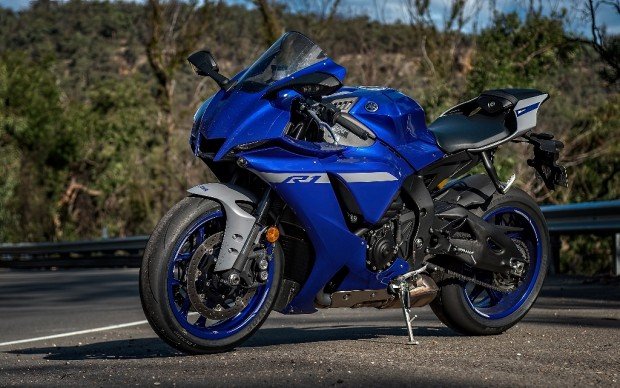 It has it going on, I reckon.

Is it better than its competition?

I have no idea. And it’s really rather a pointless question on the road, isn’t it? I really don’t care what all the buttons do [I noticed – R1].

But it’s better than nearly all of us.

And that makes it brilliant. 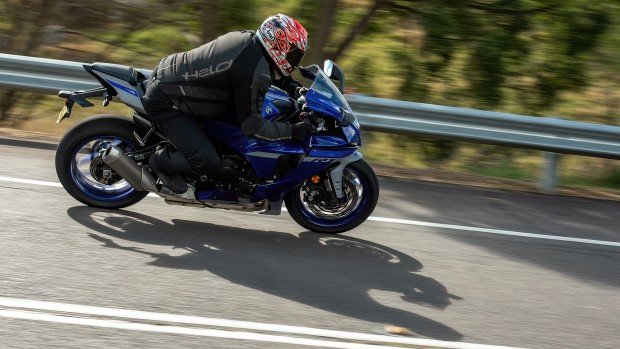 MY GEAR (Because someone said I should do this).

Click on the item if you wanna know more. Except the helmet. They’re not made anymore. I wore it because I’m sentimental.