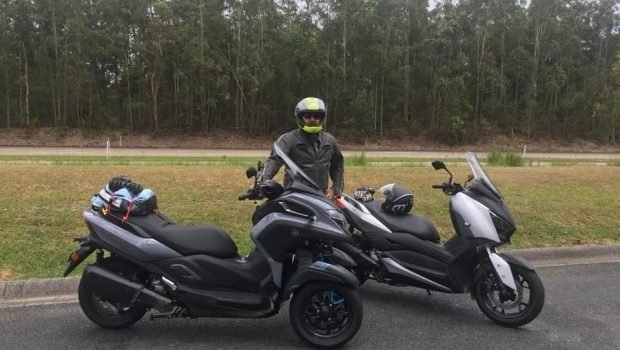 These were Tugs’ words to me when I told him what we were taking on a 1200km ride on some of Australia’s finest motorcycling roads.

Then there were other words. Terrible and hurtful words which do not bear repeating. I’m sure if I was easily beatable, he would have beaten me, for he is a brutal and violent man.

“Look,” I said to him, “Yamaha has nothing else available at this moment. It’s the wrong time of the year and the Plague has caused everyone to loot their superannuation, and they have bought all the bikes there are to buy, and that’s that. We’re going on scooters.” 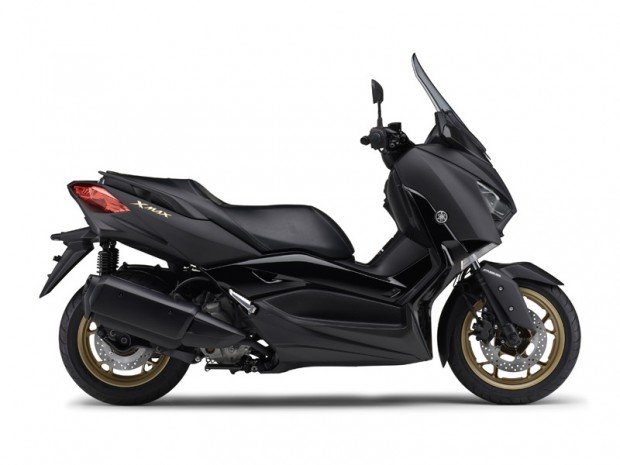 Now imagine me on this – rampant and fey. 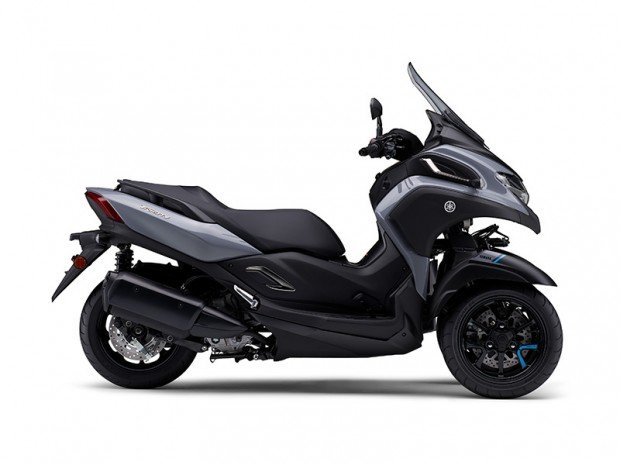 “This is going to be funny for five kilometres,” Tugs grumbled.

I nodded solemnly. “And utterly horrifying for the remaining 1195…”

How could it be otherwise? Two 300cc Yamaha scooters, as nice as they were and all, were simply NOT the kind of thing a man (or a pair of men) took touring up the Putty Road, along Thunderbolt’s Way, and down the Oxley Highway.

These were roads of legend! Surely they deserved something more…erm, red-blooded than a pair of inner-city commuters? 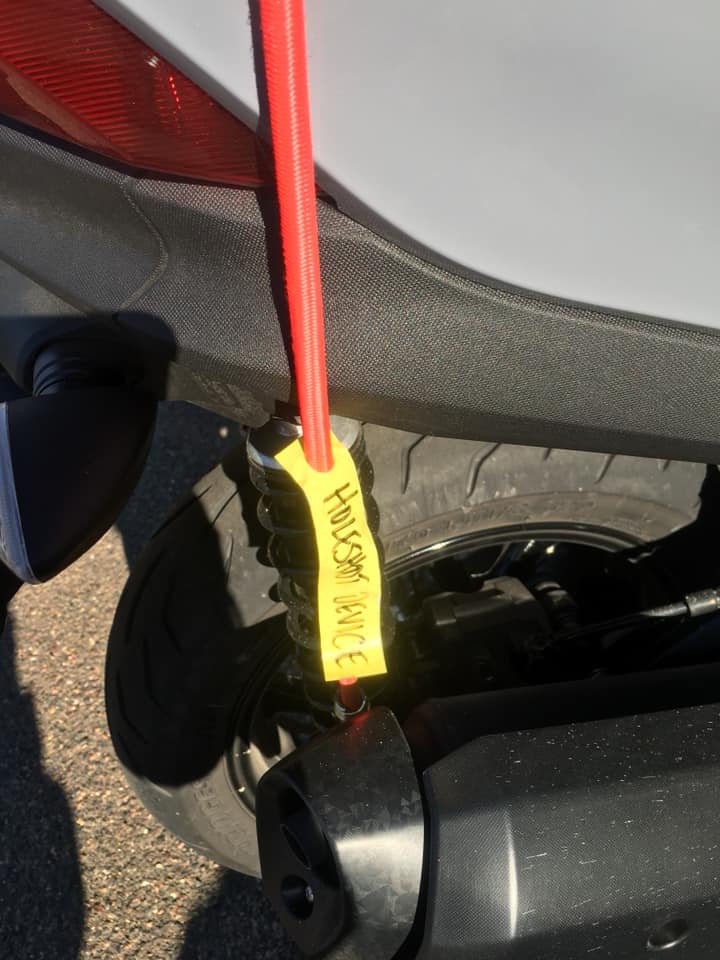 Tugs’ Tricity came with a holeshot device. I was very jealous.

Especially when there was no doubt in anyone’s mind these little scooters would not only be carting a pair of 110kg tattooed bears and their luggage, but they would be doing it with their throttles utterly pinned (and possible wired) wide open the whole time.

I did actually run that past Sean, Yamaha’s long-suffering, but very accommodating Marketing Manager.

I remained unconvinced. But what did I know? I had never ridden a 300cc scooter before. I had ridden the beastly, brilliant, and bloody fast 600cc TMAX (You may read of that HERE) – and scooter or no, I’d be happy to get on that and ride to Kazakhstan tomorrow, no ifs, buts, or maybes. The TMAX is a weapon. The XMAX? Well it’s half the capacity, isn’t it? How was that going to work?

I resolved to camouflage the XMAX well when it exploded, and then tell Sean where it was. I would use newly cut branches and trees, maybe even the same ones Tug would have uprooted and crashed through when he speared off the road in a catastrophic frenzy.

But that’s not at all how it turned out. And no-one was left more surprised than myself. I was expecting a dreary, slow, and tedious idle of a ride – scooters, right? 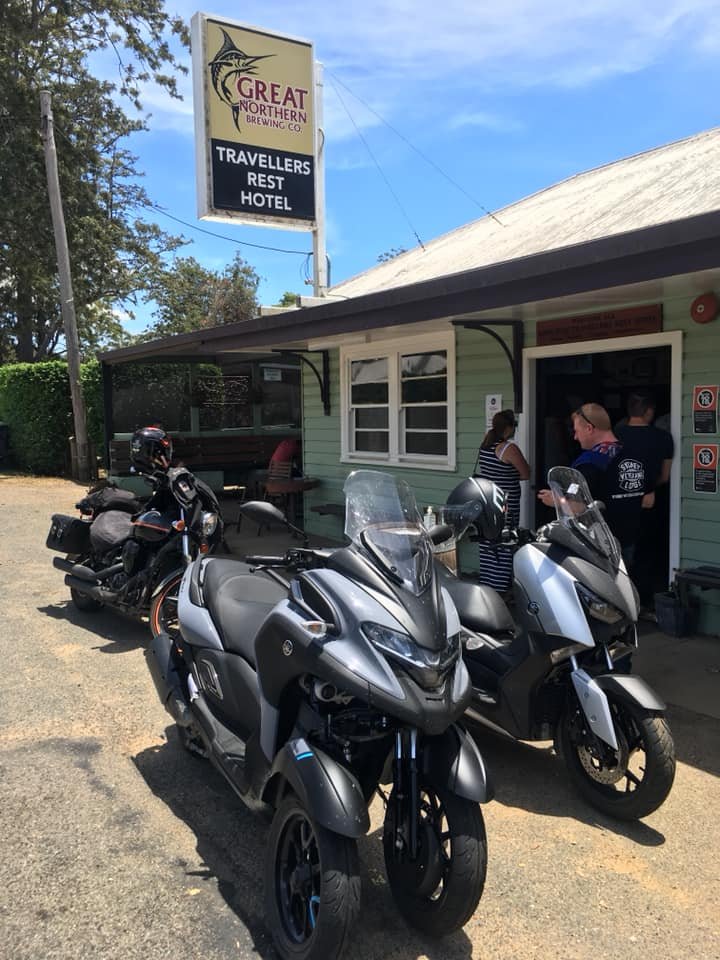 At Longflat after descending the Oxley with more majesty than was really fair to the rest.

I instead got a beaut, engaging, and when I pushed the XMAX beyond its intended purposes, a very intense and indeed satisfying ride.

The positives of big distance touring on an XMAX or its three-wheeled cousin, the Tricity 300, are immediately obvious. Like even before you leave the garage.

You can put a metric bucketload of stuff under the seat – hell, you can fit two bags of ice and a case of beer under there (yes, there are drain holes), lock the seat and never worry about shit falling off your bike again. 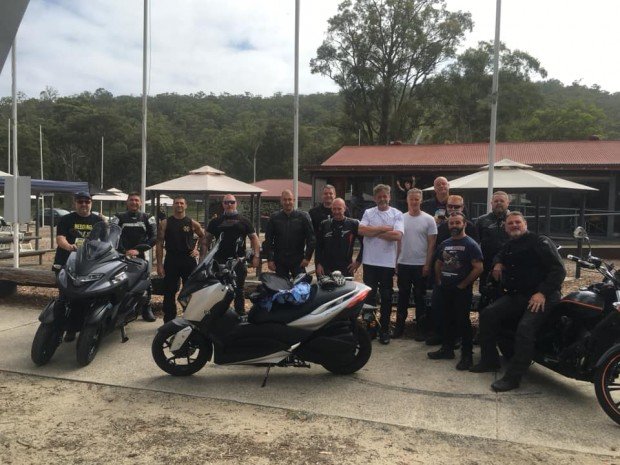 Our departure point at Grey Gums where the tour group got its first glimpse of our mighty steeds.

The seat is like half-a-metre thick. It’s like sitting on hollow pig full of butter. It’s soft, yet wonderfully supportive at the same time. You can’t put a seat like that on a bike. It would look weird. But if your scooter doesn’t have a seat like this, you’re riding the wrong scooter. Especially you bony-bummed bitches.

It doesn’t use any petrol. Well, compared to a motorcycle. I would maybe drip four or five dollars into it whenever we stopped for petrol, while the 14 blokes with us riding proper bikes were geysering three and four times that amount into their tanks. I think the most I put into the XMAX was less than $10 after I’d done 400-odd kilometres.

Wind protection was amazing. And I hate wind protection. But when you’re sitting upright on a butter-filled pig and trying to keep the XMAX whirring along at 155km/h, the way the XMAX’s screen deals with the air it is splitting is important.

It is better suspended than a $65,000 Harley. Hand on my heart, it surely is. I had been riding a CVO that dealt with bumps far worse than the XMAX.

Both of the scooters were immaculately finished, ran flawlessly in obscene heat with big loads on roads which would test any bike and rider, and that is no small thing. 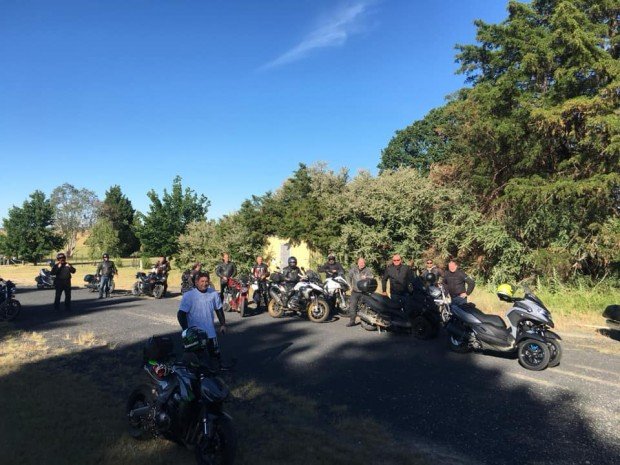 Here we are literally two-hundred metres away from where Captain Thunderbolt was shot by forces of the State.

Around town and on short 100-kay hops, the XMAX is flawless. It will sit on 110-130 all day every day. And it’s quite willing to get there, too. That willingness recedes somewhat over that speed.

But what kind of unholy animal wants or needs to ride a scooter at 150-plus anyway?

If you’re new to bikes, it’s perfect for you. If you wear a pencil skirt and heels to work, it’s even more perfect for you because you don’t have to sit with your legs apart like a girl with poor morals. If you’re a bloke who can ride a bit, then you’re going to shame the crap out of so many blokes on bikes who can’t.

Just understand that if you take it touring, it does have some limitations. And you can overcome all of them if you’re brave of heart and pure of soul.

Overtaking is something you should plan and probably reconsider if there’s not a chance you can get past the obstacle quickly. And you can’t, so reconsider. Look, stuff doing 70-80 you can pass easily. Stuff doing 100-110 not so much. Closing your eyes and holding your breath does not make it accelerate faster. 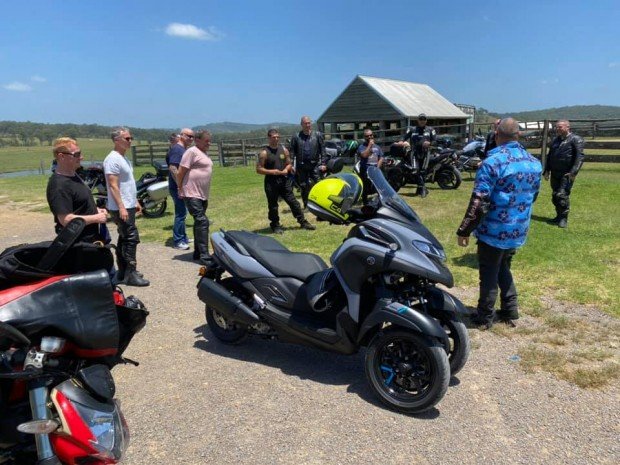 Here we are trespassing.

It has little wheels and the tyres are grippy as. That combo does very exciting things when they encounter massive holes in the road, or badly corrugated corners. So maybe slow down a bit and don’t be an over-zealous fool like me, and nothing weird will happen. Just as an aside, I’d like to thank the monsters who peeled off 50-metres of bitumen on the Oxley – an important 50-metres because there was a 35km bend at the end of the peel. How the XMAX and I made it around that will remain a mystery forever. I’m thinking its relatively light weight, gentle throttle response, and good brakes, coupled with my Serbian swearing were all contributing factors.

I thought the dial-thing that lives halfway between the handlebars and the engine hump, and which controls the ignition, the seat latch, and the petrol latch, was just way too modern and space-age for me. Tugs didn’t complain because his brain works differently to mine, but it took me two whole days to work it out. The pressing and turning action to unlock the petrol cap, is a different pressing and turning action to unlatch the seat, and different again to turning it on…and well, it just made me emotional. Tugs thought I was an idiot.

WHAT TUGS THOUGHT OF THE YAMAHA TRICITY 300

I’m supposed to hate this bike. All the Facebook motorcycle experts say scooters and their riders are not brothers and sisters of the handlebar and are to be derided at every opportunity, so I can only imagine what they think of scooters with three wheels. Not to mention ones being ridden by middle aged blokes who can’t stop laughing. Yes, this bike made me laugh like a sailor on shore leave a good dozen times in the last week. And in the good way.

I can only imagine how apoplectic with rage all the “real” motorcyclists who were passed by this little beasty and its two wheeled brother must have been over the last three days when Boris and I went playing for 1200km with a dozen of our new best mates on some iconic roads.

For what this bike is designed to do, it is a remarkably effective piece of gear. The dual front wheels add a level of confidence and grip that will bring people out of their commuter cars and trains and buses and onto motorcycles for their trips around town and to work, and that is a great thing for all of us. The more of us there are on bikes, the better we are treated by governments and other road users, so cheer up, buttercups. Accept your new scooter overlords, and bring lube. They’re coming in hard. 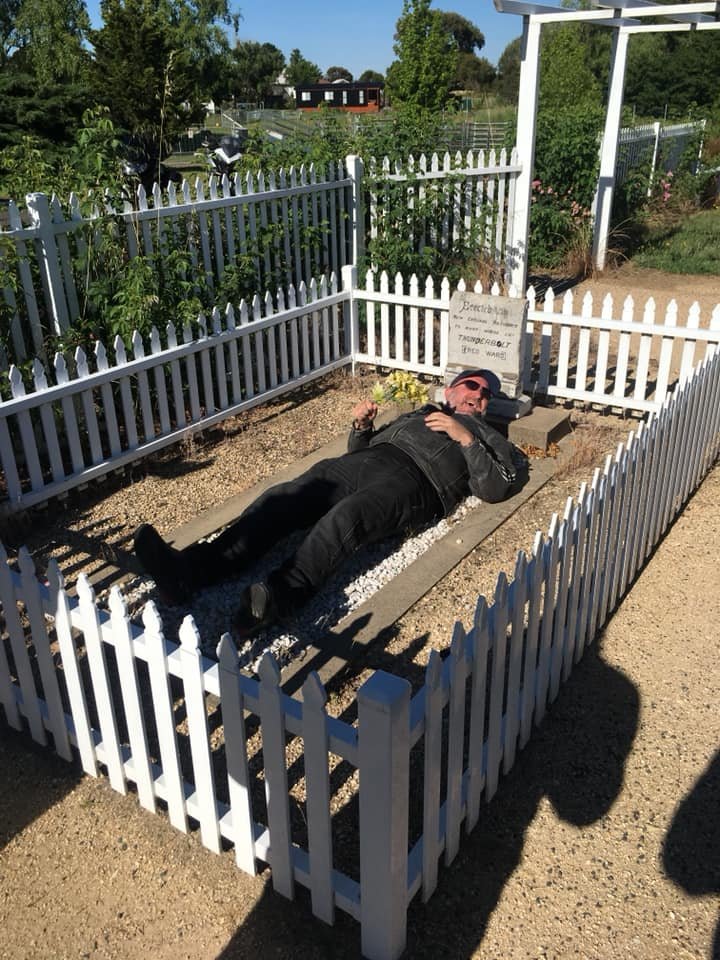 He swears it’s true on the grave of a dead bushranger.

This bike uses a similar Leaning Multi Wheel (LMW) front-end geometry system to its little sister the Tricity 155 and big brother the Niken. And yes, it feels just like a “real” bike after you get your head around the fact that your preconceptions were all wrong. It requires the exact same steering inputs as a two-wheeled bike, so the ride experience is really only different in that you have a lot more grip. And I mean a shitload more grip. Front-end confidence for dayzzz. And that’s the secret to getting more people on bikes. This feels safer, because it is safer. That holds plenty of appeal for those on the fringe of making the leap onto a bike. This bike is part of the solution to some of our woes, even if we’re not the ones riding it. Cool huh?

I’ll have more details for you later in another piece, but for now, just know that this old motorcyclist had a smile like a banana for much of my time on it.

THE SUM OF ALL THINGS

I was surprised and pleased. Yes, there were times when I wished I was on a bike, but I wasn’t, so it’s kind of like wishing I was 30 years younger – utterly pointless and sad-making.

I rode what I was given to ride, and I rode all the bastards out of it, and I did it on roads that challenge the best bikes. As did Tugs.

And it was great fun, so of course I was surprised and pleased. 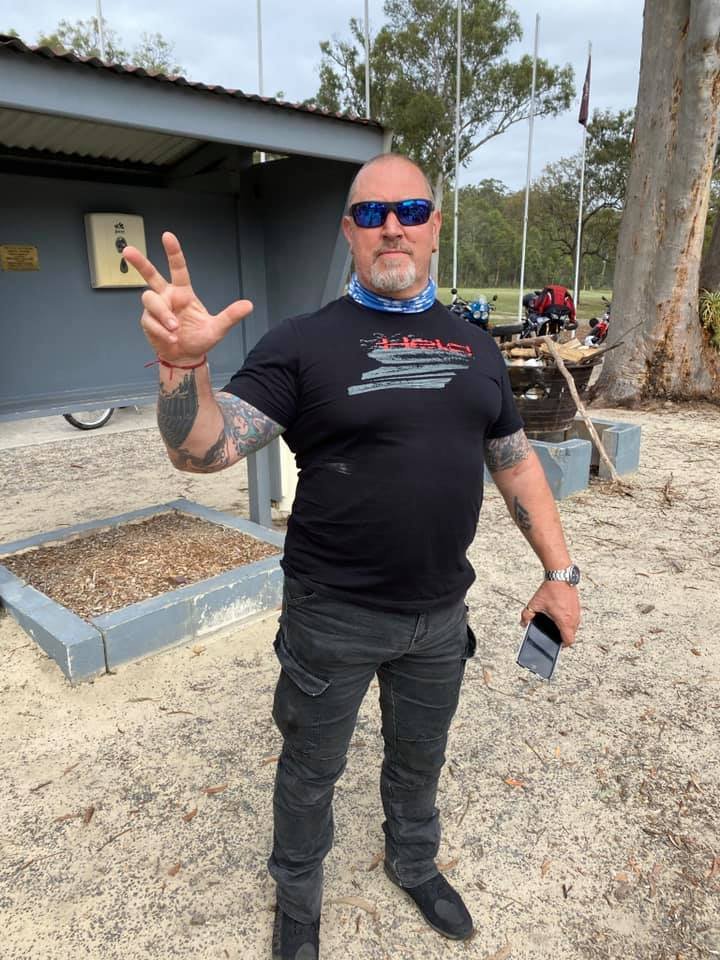 Take your scooters touring. Do it.

There are not many manufacturers who will offer crazy people scooters to do crazy things on, and back the performance and reliability of those scooters to the hilt.

Bravo, Yamaha. And thank you.