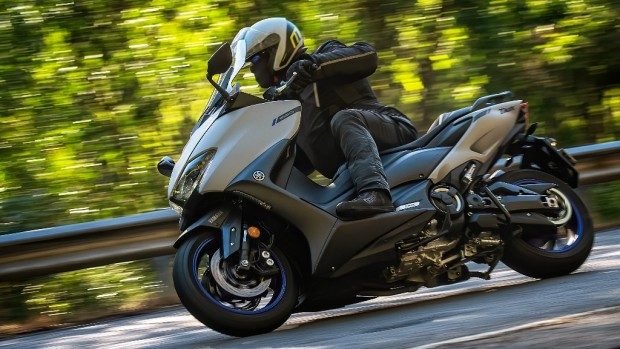 IMAGES AND FASHION ADVICE BY NICK ‘DID YOU BRING HEELS?”’ EDARDS 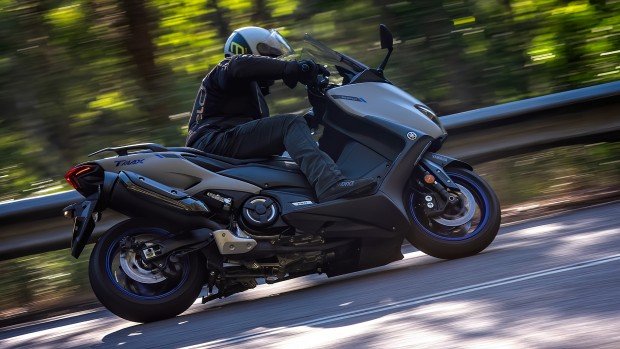 When I finally returned the battleship-grey TMAX scooter to Yamaha HQ, I was shaking my head. I gave it the stinkeye over my shoulder.

I’d been giving it the stink-eye over my shoulder for the last four weeks. Each time I’d park it up and walk away, I’d look back at it in that stink-eye way and mumble to myself. 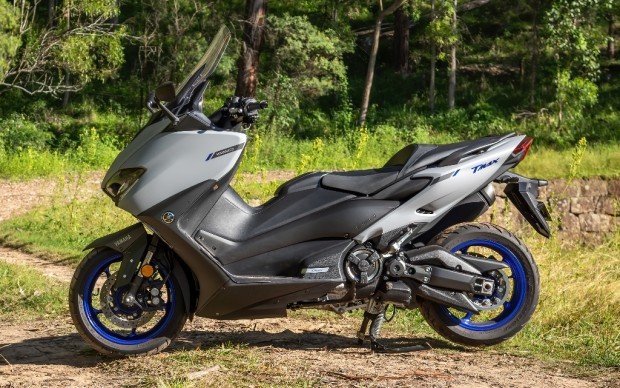 There is a certain Euro panache about it, which is mitigated by its grim matte paint.

The “stink-eye” is that look Rottweillers give you when they’re considering which part of you might need to feel their teeth, while kinda loving you at the same time. They are a special breed.

It’s special because it’s a scooter that goes like a hailstorm of hate being chucked off a shovel wielded by a bloke with shoulders like boulders.

It’s all quite unnerving, actually. 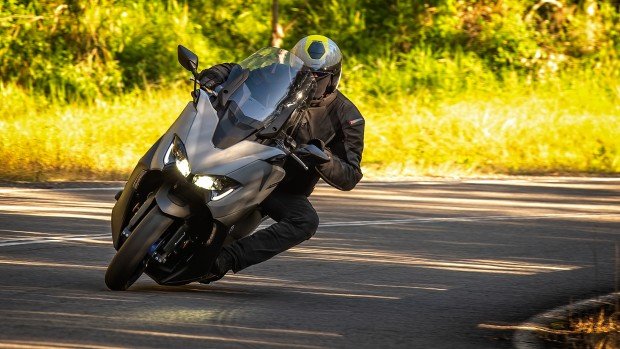 The headlights are very good. The horn tootles. I wish it wouldn’t. But it does.

Like, it’s a scooter, right? Girls in pencil skirts and heels ride them to work. Slim-hipped Mediterranean fellows in tight fawn-coloured jeans and sun-kissed ankles are always heaving them onto centre-stands in front of cafés full of haughty waiters. Drunken bogans in Bintang T-shirts foolishly hire scooters in Bali not realising this is how the Balinese exact revenge on them for touching their daughters.

I’ve seen the pictures, I’ve been to places. I know this to be true. 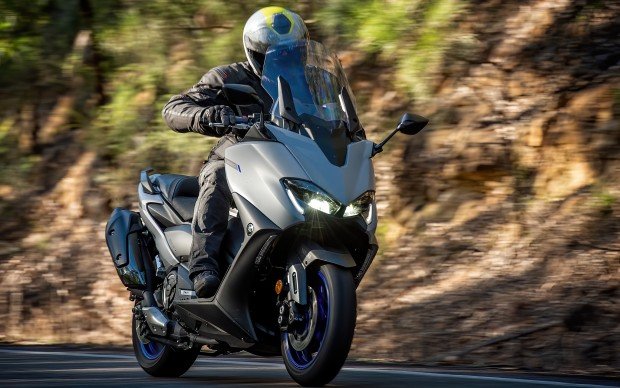 It’s quite a mean-looking thing from some angles.

So men who ride motorcycles have no business riding these scooter things because scooters, as legends tell, un-man you in some indefinable way, right?
I was solid in this view. And I lived it.

I have only ridden two previous scooters. One was that SRV thing Aprilia built with 850ccs and the manners of a meth-fueled psychopath. It terrified me. It was like sitting on a toilet being shot out of a cannon. The other was some small, unnameable, two-stroke whizzer I wanted to burn after ten minutes of shaming myself by being slower through traffic than a pedestrian.

So, I don’t know much about them and I have all the required prejudices not to seek further enlightenment. 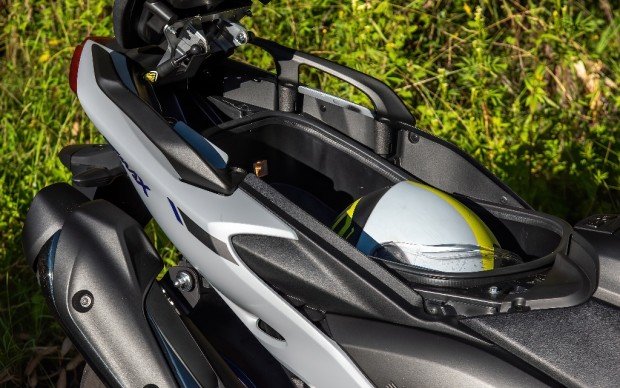 A small harvest pig would also fit in there.

But I know why people ride them, and I know why they are popular all over the world, except maybe not so much here.

Scooters are easy to ride for people who don’t ride.

Motorcycles, when you think about it, are actually quite complex by comparison. All your limbs need to be involved in the process. You need to have a degree of control over those limbs as you apply various brakes, and use the clutch and the throttle with a modicum of skill as you make your way about the world. 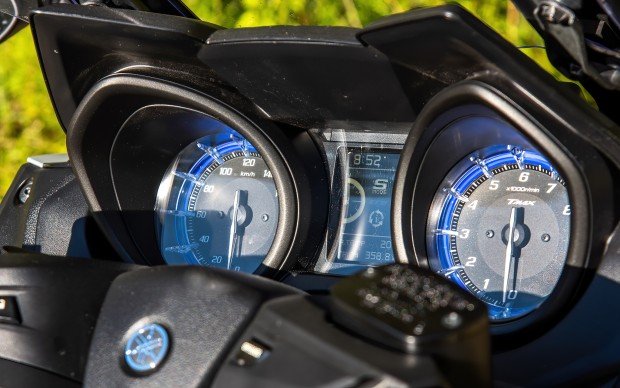 Deeply set, with some reflective issues which don’t occur at night when the fun starts.

Scooters don’t need none of that crap.

That’s it, really. The surprisingly intricate dance all four of your limbs engage in when you’re riding a motorcycle is not needed.

Which thus opens up the world of two-wheeled delight to people who would baulk at riding a motorcycle. 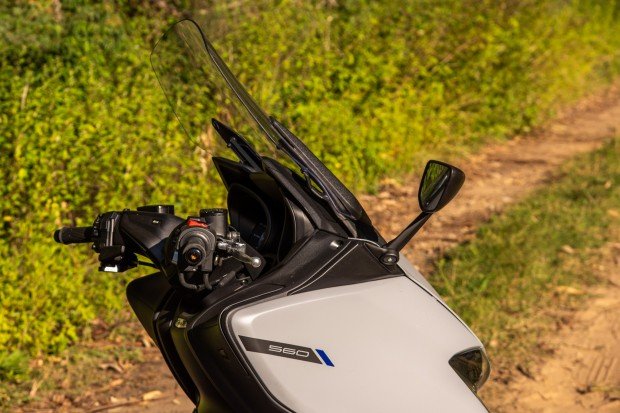 Scooters are not as intimidating as bikes. Their wheels are small and cute. No nasty engine-thingy is visible. There’s usually a giant cavern under the soft seat that can carry an entire small mammal and a case of beer. And it doesn’t make an antisocial noise.

Yes, I know there are exceptions. Deranged Europeans do hot up scooters and race them and make them sound like alien ray guns, but we don’t get much of that here in Oz.

So let’s stick to our reality. 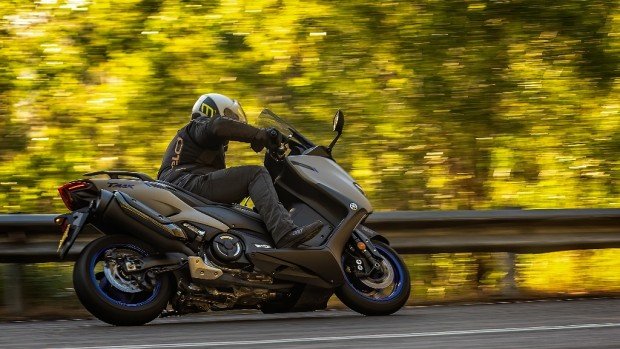 It is a substantial chunk of real estate. But relatively light and very rideable.

And our reality is when you give a scooter to someone like me, for whom the whole clutch-gears-throttle-brakes fandago is hard-wired with industrial cables stamped “MILITARY GRADE”, there is a period of adjustment.

It took me a kilometre or so to not grab the left-hand lever thinking it was a clutch. I learn quick.

It took me a few more kilometres to realise the TMAX sprang off the traffic lights like something clawed, scalded and angry. Off the mark, it’s quicker than almost any LAM I could think of and even some of them proper motorcycles. There is some real red meat hidden under its acres of matte-grey bodywork.

The seat is wide. Like war-horse-saddle wide. It’s unbelievably luscious and soft, and without a word of a lie, I would ride the TMAX to Darwin before I’d ride half the comfy-for-100kms motorcycles on the market. But the width of the seat does mean you’re on tip-toes when you come to a stop. A nice pair of seven-inch Jimmy Choo stilettoes would solve that, of course. And it dawned me why girls can and do actually wear heels when they ride scooters. 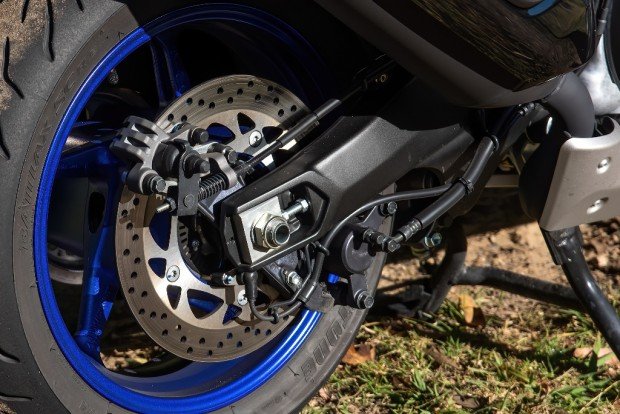 Don’t get excited, stunters. One of them is a handbrake.

Of course, on a maxi-scooter like the TMAX, girls could not sit with their knees primly together like nuns in a church. There’s a tunnel thingy full of engine and seamless gearbox that runs down the middle of the TMAX. So there’s a bit of man-spreading required.

By the time I got to the Putty Road, I was primed. My powder was dry. The ball was in the barrel. It was time to light the blue touchpaper.

Snaking down to the Colo River at a speed that dried my mouth, I realised two things…

Firstly, engine braking is so over-rated. There is none on the TMAX…well, there kinda is, but because you can’t downshift to prod it into life, stuff gets very exciting very quickly and in a very good way once you wrap your head around this fact.

Secondly, I’m not entirely sure what kinda belt-driven sorcery is going on under the body work, but I could detect no changing of gears, either up or down. I twisted the throttle and…well, it just went. I buttoned off, and it slowed down. If I didn’t button off, trusted Yamaha’s brilliant engineering (it has been at this TMAX thing for 20 years, after all), and the gooey little Battleax hoops, then I was arcing through corners at quite breathtaking speeds. 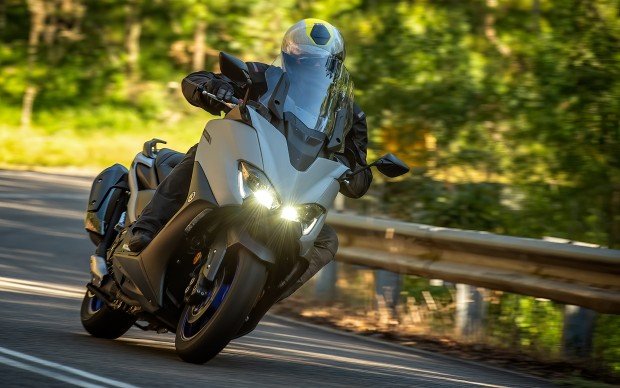 It is a valid touring proposition.

The suspension (41mm upside-down jobbies on the front) was surprisingly good. I was prepared for thunking and clunking. I got a smooth, controlled, and very sophisticated ride.

ROOTING OF THE HEAD

There was a bit of a head-root going on everywhere, of course. I am used to fully engaging with a motorcycle when I am applying myself in corners. I shift my weight like it says you need to do in the handbooks, and so on and so forth. And when you’re sitting astride a bike, it works to do that. You’re not sitting astride the TMAX. You’re sitting on it as if it was a comfortable chair…um, that will happily do 150km/h all day, and even take you quite a bit over the 160km/h threshold without a hint of fuss.

And that takes a bit of mental gymnastics to accept.

So does the fact the TMAX will easily and eagerly carve the crap out of a lot of motorcycles in corners, even if the riders are wearing race-leathers and imagine they are applying themselves. 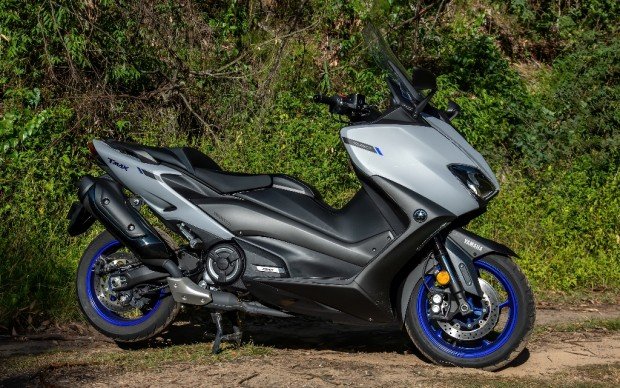 There’s even some goodly storage space in that vast front. Like little gloveboxes for holding gloves and sunnies and small handguns.

That fact alone is worth the price of admission. Those riders won’t even speak to you at the coffee shop when they pull up after you. But you should stare at them anyway. Makes them feel very icky.

By the time I’d reached Mother Putty’s Ten-Mile, I was a storm of conflict, but full of commitment and intent.

The thing went like mad and cornered delightfully once you got used to the non-motorcycle riding position. It was seriously comfortable. But my motorcycling DNA was sreaming: “SCOOTERSCOOTERSCOOTER!” at me, even while I was belting it up the Putty at a pace I’d normally go on a bike if there wasn’t a race on.

I’d managed to reprogram my crap to the point where I was swinging easily through the bends. The TMAX is kinda long about the wheelbase, so it doesn’t steer quick, but it certainly steers sure. You can ease your legs forward or keep them in the more traditional position, and while I might have liked the foot-place to be a little wider, it really wasn’t an issue.

The fairing-screen thing was as vast as hangar door, so there is no wind hitting you. Like none at all.

Pillion accommodation is ridiculously comfortable. I did get my wife to sit on the back for a bit, and she said it was astonishing. Then she also said some stuff about me slowing down before she put her nail-file into my kidneys and some other stuff I didn’t quite hear. But on the whole, she was amazed at the level passenger comfort. 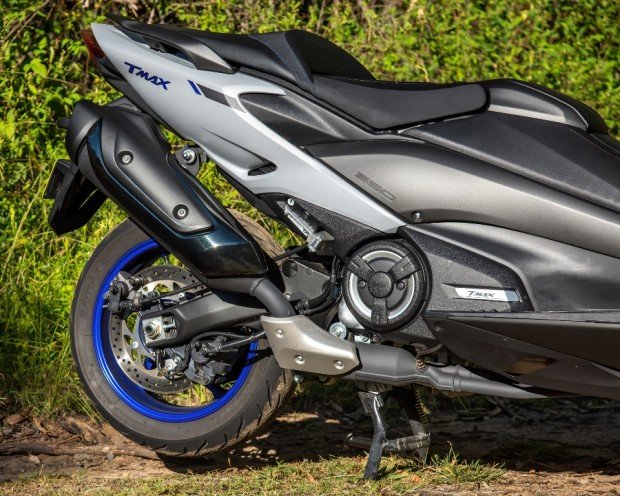 Pillion grab-rails are solid. You’d have to be doing mad stuff for her to break them. And she’d have to be strong.

The analogue instruments were dazzlingly dazzling. Lotsa chrome and blue colouring, and they can be hard to see if the sun is on them. I didn’t care. I only ever looked at them to marvel at the speed I was doing. It seemed to be economical (200km out of the tank, more or less), and there’s some weird scooter stuff going on during the start-up procedure. The side-stand has to be up, and one of the brakes has to be engaged. And those brakes are quite good. Most of the time I was only using the front. But now and again I would avail myself of the rear because I was being a little too silly with corner entry speeds. But then, who knows? A better rider may not have been holding his breath that much.

The TMAX is a truly irrational thing. A scooter that redefines the scooter paradigm by being seriously and deceivingly quick, yet still succeeding spectacularly within its urbany niche.

Like I said, I’d be happy to ride it to Darwin.

Is it fun? Of course. But it’s also rather serious if you’re inclined to take it seriously. Its performance and its price ($16,599 ride-away) means it’s competing with some very good motorcycles.

But it is not a motorcycle. It is a scooter that eats motorcycles.

And that is the wondrous paradox of the TMAX.

That is the rabid confusion it sets in the motorcycle mind. 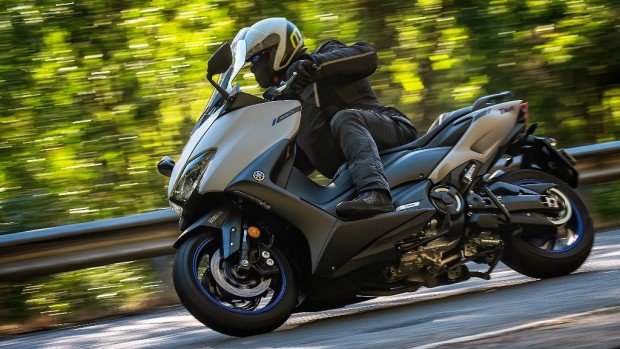 The controls and their falling?
How easily they fell to hand is a thing for tales by the fireside. I shall not tell them. But they are there to be told.

The dairy-content of the torque?
I’d give it two-and-a-half Holsteins out of three.

The glistening of things?
It’s matte grey, but the chrome around the instruments gets a fair gleam on.