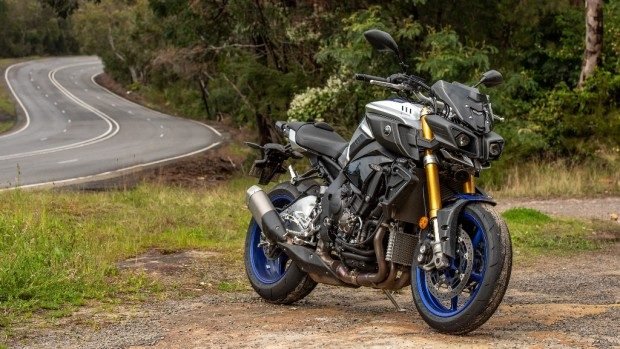 Raise your hands up, this what rock and roll looks like”

This thing is a goddamn monster.
It looks like a knife-fighting robot, it’s loaded with tech, and offers you a ride that will leave you breathless, witless, and wanting a cigarette to calm yourself.

The MT-10SP is Yamaha’s king-hit in the Big Crazy Naked class, and it comes with an added broken-bottle glassing while you’re still trying to get back to your feet. 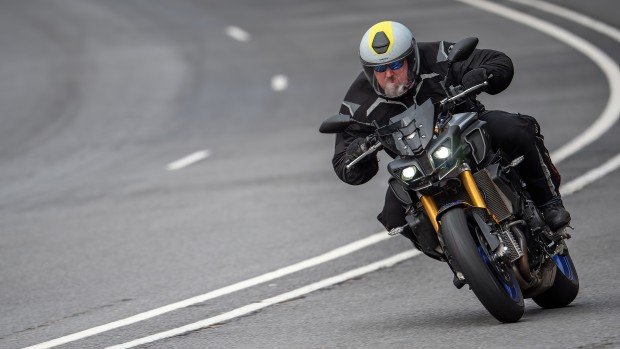 It was damp the day we shot this. I was damp too. 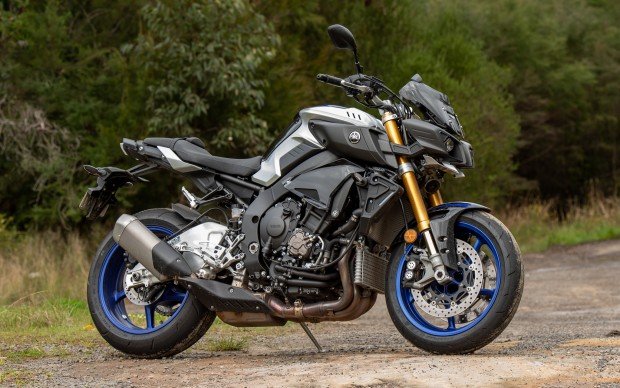 Robotic brutality at its finest.

While you’re down there gargling salty claret, consider the numbers.

That stunning and utterly unique cross-plane cranked engine (yes, the close-clone of the R1’s powerplant) provides 160 horses and 111Nm of torque in a package weighing 210kg. 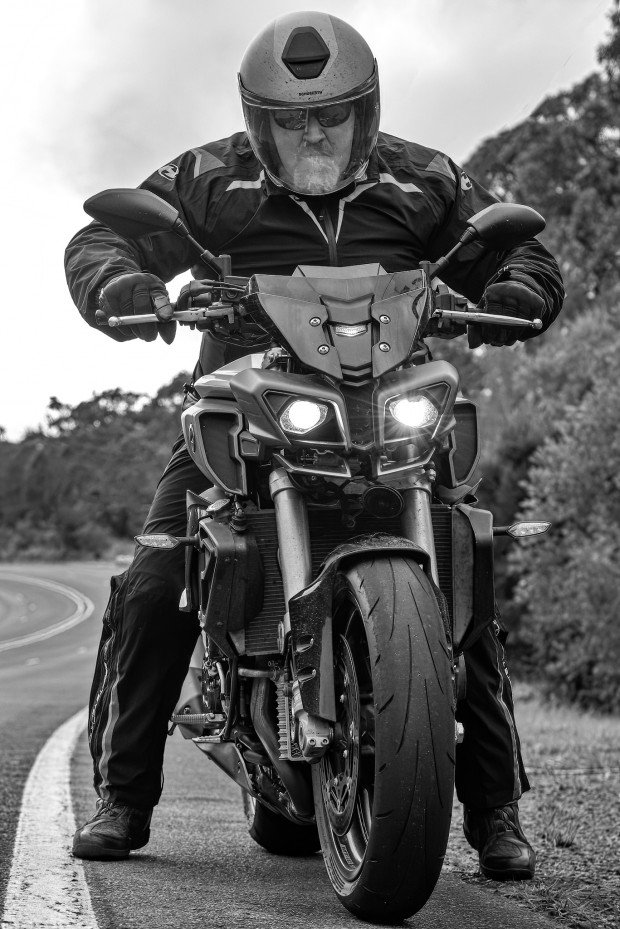 We sucked all the colour out of the world.

Don’t bother rushing off to compare its numbers to the R1. I’ll do it for you. It’s 40bhp down and nine kilos heavier. But the important stuff, the stuff you ride, the stuff rock’n’roll is made from, is the torque – and it’s only one tiny Nm down from the R1 in that. 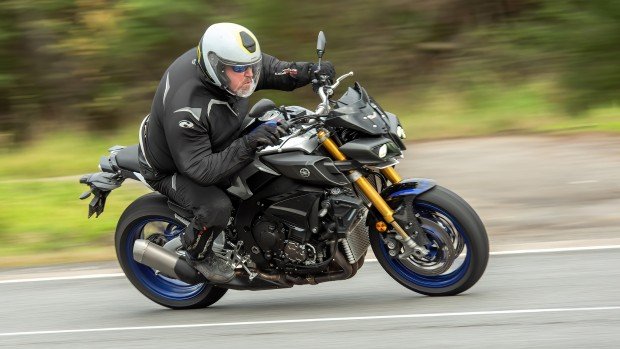 And importantly, and crucially, and over-archingly, the ergos and the power delivery make the MT-10SP the more potent real-world weapon by far.

You wanna do lotsa track? Buy the R1.

You wanna dance in the real world? This is what rock’n’roll looks like. 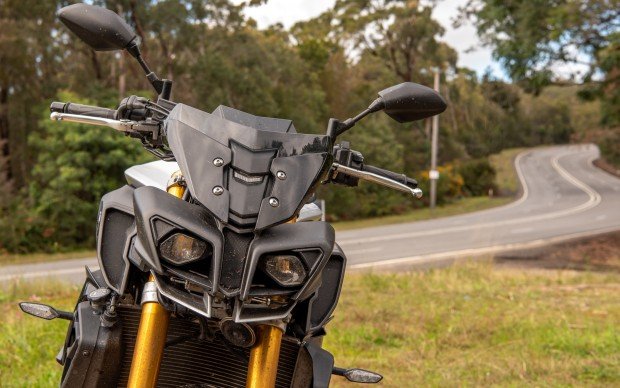 I spent a lot of time on the MT-10SP. I rode a lot of miles on it, on a lot of different roads. It is as potent a bike as anyone could ever ask for, and so engaging and satisfying to ride – and by that I mean commute, scratch, track-day, or tour – you’re gonna feel like you did back in the day, stumbling out of a killer rock gig at 13 o’clock, your ears ringing, your head spinning, and smelling like sin and conquest. 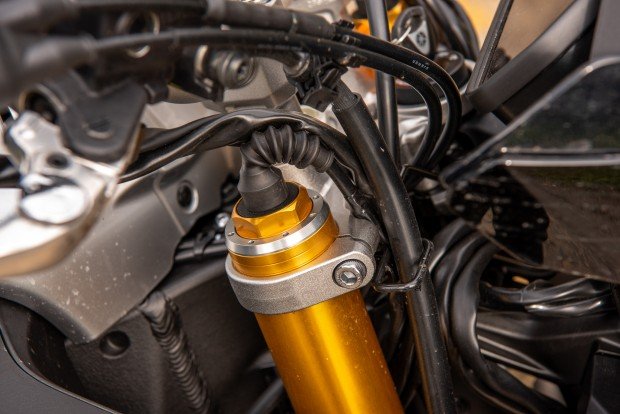 “Do what the black tube tell you, golden pole!”

It takes a deal of fitness and skill to make an R1 rock.

You can rock the MT-10SP with a beer-belly and a head full of dares.

Why? Because ergos and electronics, damn your eyes! 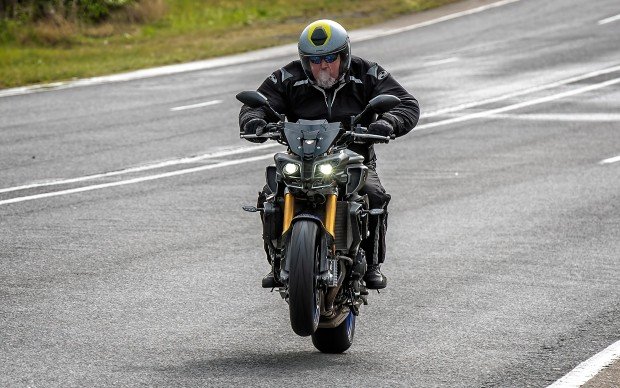 “WHY’S IT DOING THAT?! YOU EVEN LISTENING, JESUS?!”

Accessing the MT-10SP’s computer-guts takes a little application. The bra doesn’t just fall off. Sometimes you have to fiddle with the clasp a bit.

There are four ride modes – A (Awesome), B (Banging), C (Capering), and D (Damn! It still goes like a bastard!). Each one of these modes comes pre-set with throttle response, traction control, and suspension set-up. 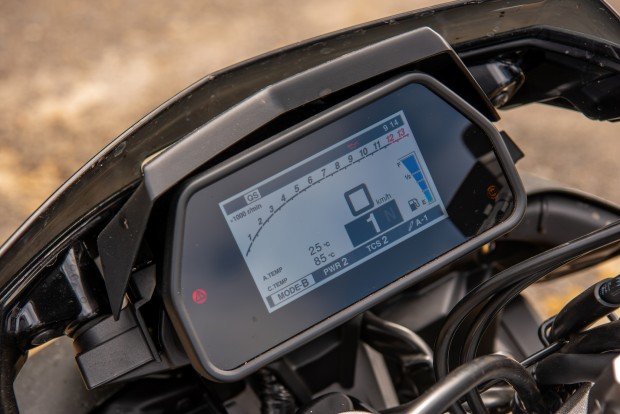 The cops WILL seize this for evidence.

But you can fool around with it. Of course you can. And of course you must. The savagery of the throttle response in A might well appal you if you are weak and iffy about the gonads. Relax. You can downscale to fluffier deliveries.

You can also change the throttle response and traction control in three ways (Jesus, Bloody Jesus, and Sorry Jesus), or you can do what I did, and just mash buttons and try things until you find what works for whatever you’re doing at the time. I’m guessing like most people, you’ll find a setting you like, and that’s where the SP will live. Just like that favourite outfit she used to wear to gigs that worked every time for you. 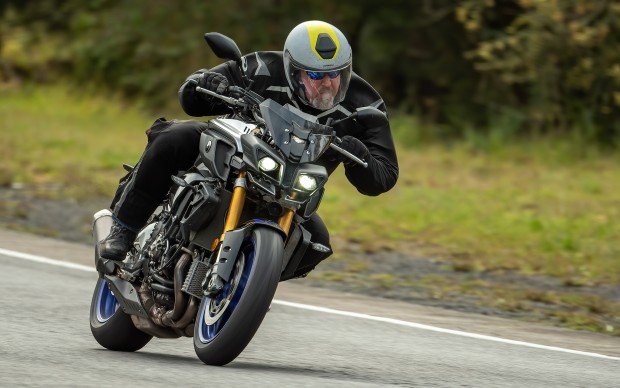 Now, you can only change the ride modes when you’re at a stand-still, but the other stuff can be fooled with on the fly provided the throttle is off. I don’t know why I’m telling you this. It’s not like you’re gonna be punching buttons and staring at the dash when you’re riding, is it?

I did that. I cannot recommend it. 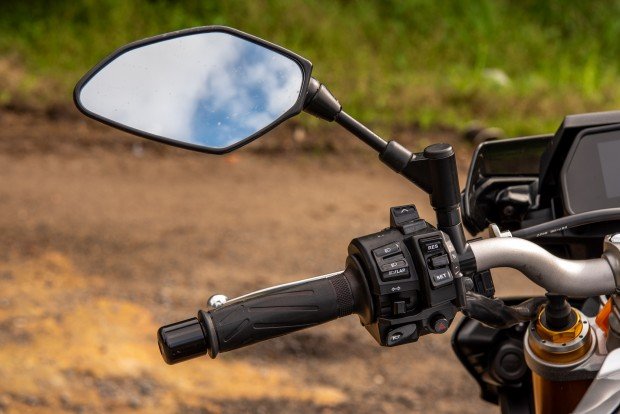 Lotsa stuff to press on the left switchblock. 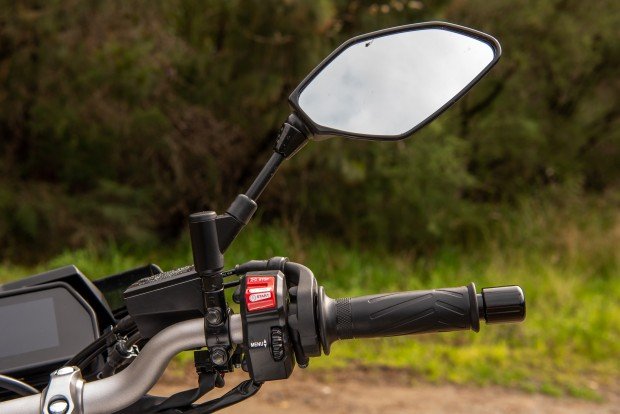 That’s the menu-scroll wheel under the red God button.

The dash is busy and it will take some familiarity with what’s what on the screen. Some of the stuff is small. Most of the stuff, the important stuff (like the number that decides how much jail you’ll do) is the right size.

Like I said, you won’t be staring at it when you’re riding. 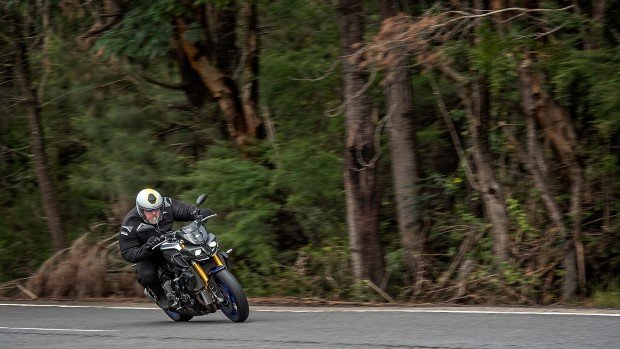 Damn forest is full of werewolves. I must escape!

Firstly, there’s that growly, edgy-sounding engine. No other in-line four sounds like, nor ever will. It sings its own very own power ballad.

Then there’s the way it comes on out of corners, force-feeding you torque like a Frenchman shoves food down a goose’s neck to make its liver into pate. 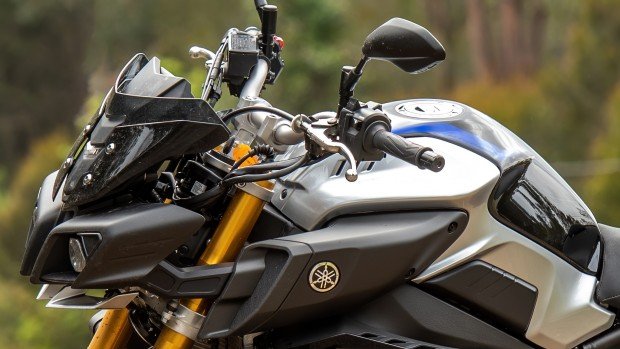 The clutch-cable vaguely gets in the way of the key. But only if you’ve got nothing else to complain about.

And then there’s the handling. Not many bike manufacturers get that whole electronic suspension right. Yamaha is one that does.

That combo of 43mm inverted Öhlins fork and rear Öhlins monoshock, wedded to some very sophisticated compu-geekery, just work a treat – no matter how in over your fool head you are. 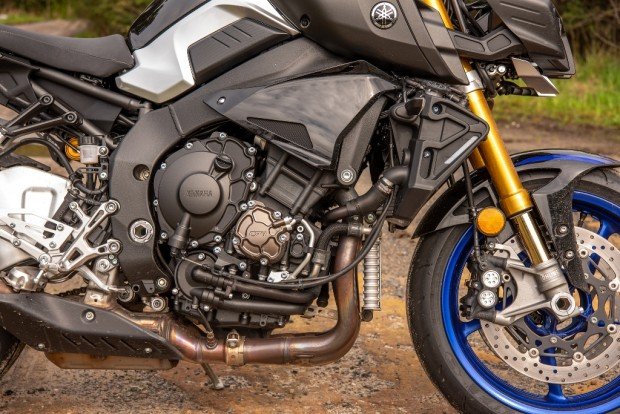 There’s a lot going on here. None of it is pretty. All of it is wicked.

It can be a bit track-stiff in the A and B modes, but that’s not a bad thing. The chassis and steering are all about fast turn-ins and firm, confidant lines.

And finally, it’s the whole Yamaha steel-reliability thing. I can certainly understand the appeal those Euro exotics have. But no-one builds bikes as reliable as the Japanese – and Yamaha is a byword for that reliability. It will work, it will work all the time, and it will work for the next four owners as well. And that’s no small thing. 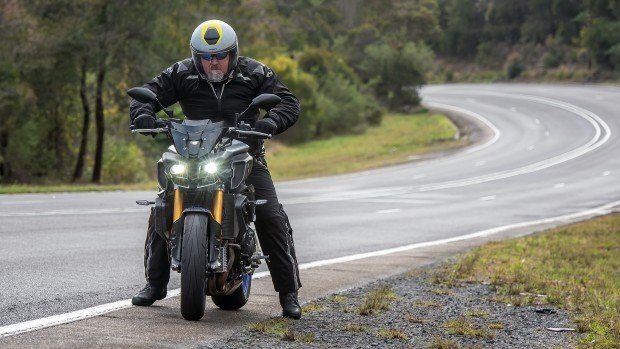 I’ll just pull over here and wait for the cops, shall I?

Sure, it’s a little bit thirsty. But all the best girls you’ve ever met at a gig tend to drink like drains…but dance like strippers. It’s a trade-off you were happy enough with then, right? The MT-10SP is no different. You’ll get 200km out of the 17-litre tank – maybe a touch less if you’re in the zone. Shut-up. Everyone of those kays will be superb. And as wicked as you feel you have the ability to make them.

What else was cool?

There’s a surprising amount of wind-deflection available. The way Yamaha has designed the MT’s “face” does a great job at diffusing the wind – and let’s face it, you’re gonna get a lot force-fed wind in your face on a naked bike. This one deals with that beautifully well. 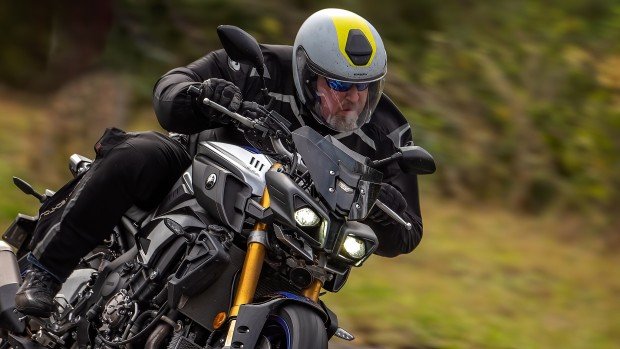 You can see the wind dying as it hits the front of the bike.

It will wheelie a bit under acceleration even with the traction control on, and has an Assist and Slipper Clutch for when you’ve really over-stepped the bounds of sanity.

The quickshifter is precise and slick, the headlights do a decent job at Christian velocities, and the entire package feels taut and poised. Even the brakes are powerful and full of feel, and showed no signs of anything resembling fade even when I hauled on them far too much.

The MT-10SP is a bike that can overwhelm you a bit at first. It’s sheer acceleration through the gears is potence personified. Be prepared – you are not in a racer’s crouch – because if you’re ready for it, it’s just magic. 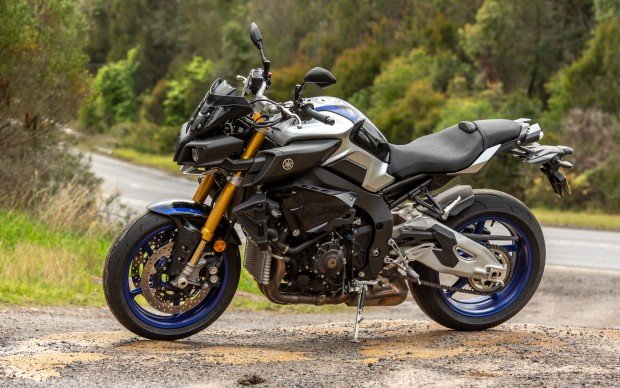 There’s even a little seat-bump your bum can eat when it needs to.

It’s that girl at the rock concert who is rock’n’roll incarnate. She’s got all the right moves, looks a bit mental, has a sinful twinkle in her eye, and sashays across the room to stick a knife through your heart and her tongue in your mouth, while you feed her tequila and lies.

And you know you’re going to have the ride of your life, so it’s just fine.

The MT-10SP is that ride – stone-solid brilliant, compelling, fast, precise, comfortable, and with an engine and styling that is all its own. 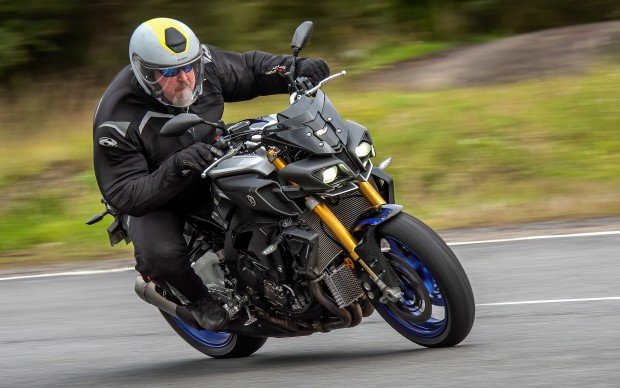 COLOURS: This colour. The SP colour.