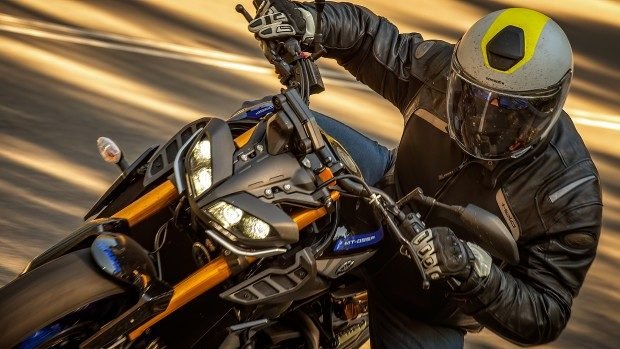 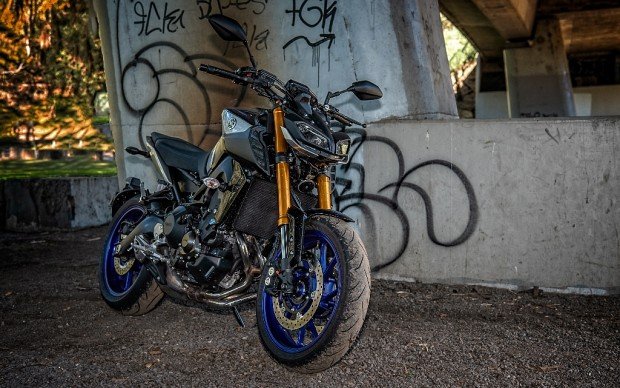 The graffiti is crap, the bike is great. It’s the universal paradox.

There is something intrinsically “right” about Yamaha’s MT platform. The package works. You can tell by the amount of MTs of all sizes the factory has sold since it began its now celebrated journey down the Maximum Torque road.

At the top end of the MT range sits the crazy-souled MT-10SP. A naked R1 for all intents and purposes, it’s Yamaha’s answer to every question ever asked about top-of-the-heap naked bikes. You should maybe go ride one to see what that conversation is all about.

But just a touch below that titan of licence-loss, and drawing styling cues from it, sits the MT-09SP – which is an MT-09 filled with quite delightful levels of Social Protagonist evil. 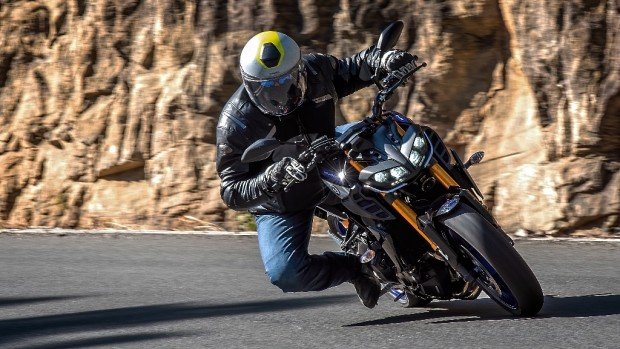 “Cool! Nick is in the middle of the road again…”

When you look at the important numbers, it’s quite a simple but hugely effective formula. Filled with the blood of its people, the Sainted Paladin weighs a dainty 193kgs. Its engine – that now proven testament to reliable three-cylinder might – produces 87.5Nm of torque and touch under 114 horsies. And all right where you’re doing most of your riding.

The standard MT-09 has few peers in this class – especially when you consider the price – $14,249 ride-away. But the Sensual Parabola version, enhanced as it is with a golden Öhlins bouncer on the back and fully adjustable gold-kissed Sachs units on the front, is rather more special for a mere $15,999 ride-away. 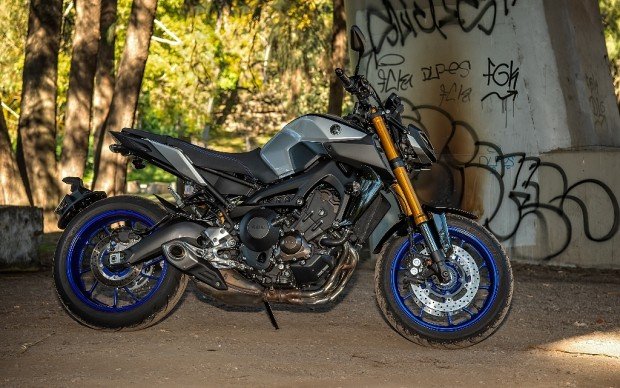 Nothing this hot has ever been done on that under-bridge dirt.

This enhancement deals with the main criticism the MT-09 copped when it was first released. The suspension wasn’t quite up to serious charging. Much of that criticism was parroted by people who don’t charge hard, or soft, or anything much at all. And while I did agree the early seats were a little on the cruel side, the Salty Perineum has addressed all that. And how, but I’ll get to that in a sec. 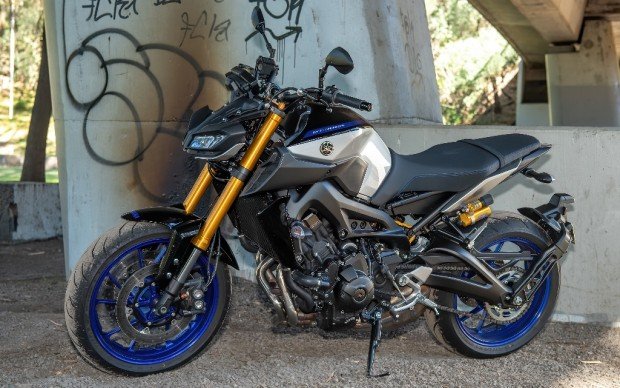 So price is clearly an important thing to many people in these dark times, which is the only reason I’m even mentioning it in the context of a review. I come from the school of “If you want it bad enough then price is no object”, but I know a lot of people are wired a little different to me, and would not know the first thing about robbing a servo.

Stylistically, the Stoic Ptarmigan has crawled deep into Yamaha’s aggro box. It looks the business, if your business is fighting with broken bottles in dark alleys. From its madly staring quad-headlight orbs to the hunched mechanical brutality of its stance, the Screaming Paramour is a most modern take on the naked – hence its popularity with younger folks and horrible old bastards like me. 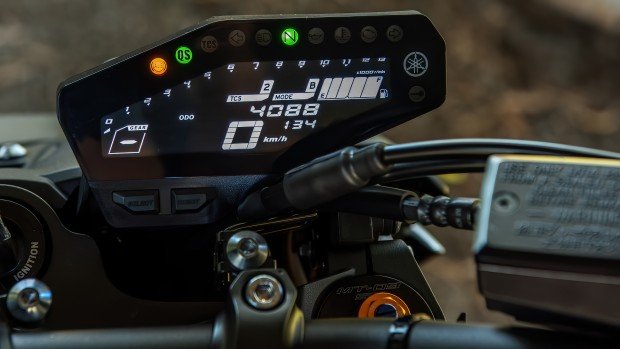 Simple, effective. Not in colour? Oh, you want a TV to look at?

I like a bike to look like it means business. And once you send your chicken-strips to Jesus, your tyres will also attest to your business without you having to say a word.

So how’s an Öhlins-loaded MT-09 address my needs?

This is what I wanted to know. And if you wanna know something like that, then you go and ask Mother Putty. 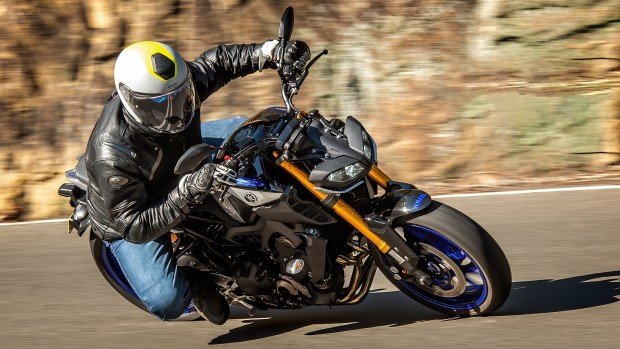 Such a happy place for me.

Mother Putty, or the Putty Road, is a 170-odd kilometres of “This is what is wrong with your bike” kind of road. If you wish to find the limits of your bike in terms of power, suspension, and handling, this is where you’ll find them. You will also see how brave you are and how much voltage you can absorb from a police Taser before you mess yourself if go on the wrong day.

I don’t go there on those days. 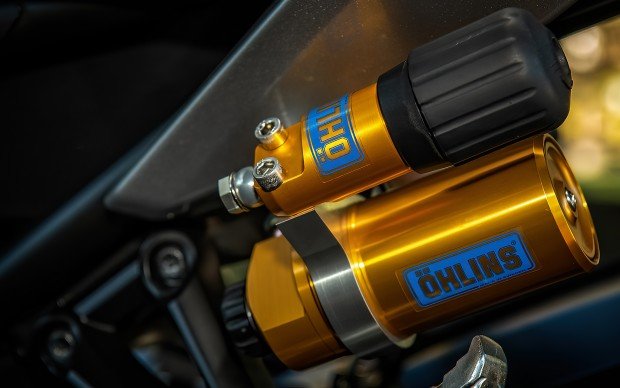 The top thing you turn. The thing underneath purrs when you do.

On the days I went, I discovered the following…
The suspension is firm. Not racetrack firm (thank God), but it was bouncing me more than I liked. I turned the Öhlins knob to the left some. The pogo-ing settled down and I figured the first thing I would do if I owned a Sassy Pelican was get the suspension set up by someone who knows this dark art. Sure, I can screw around with it like any other putz with access to a screwdriver and beer. But you really can’t do better than taking it to a suspension specialist and being amazed at the difference it makes. 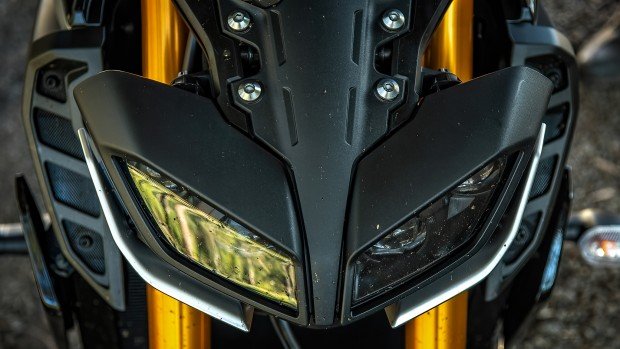 Here’s looking at you, kid.

Proceeding apace, I noted the seat was no longer canting me forward and affronting my manhood. It felt normal. It made me smile.

And smiling is the best way to engage with the fast sweepers north of Grey Gums that lead to the hard-twisting cruelty of the Ten-Mile.

Getting one’s mangina off the seat to engage righteously with fast corners was easy, and ergonomically, the Slavering Passport is perfect for…um, such Spirited Preachings. It feels right when you’re banging through the sweepers – planted and sure and you’re not having to contort your body to make it work – that’s a big plus in my world. 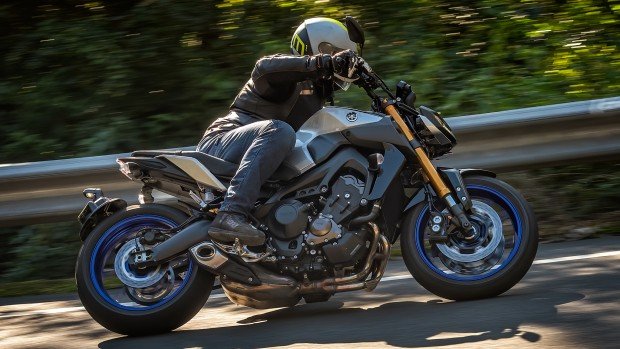 Entirely contortion free on my part.

The torque you’re being fed negates the need to saw through the gearbox much – unless you bung a pipe on it and you wanna hear that triple howl. Then saw away, pilgrim. It’s good for what ails you. The up-and-down quickshifter will agree.

And it’s bulletproof. Yamahas, fridges, and cockroaches will all remain in perfect working order when the end of the world comes. 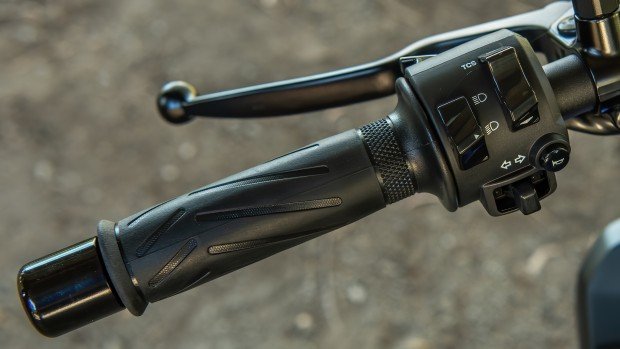 Ready to fall readily into any hand. 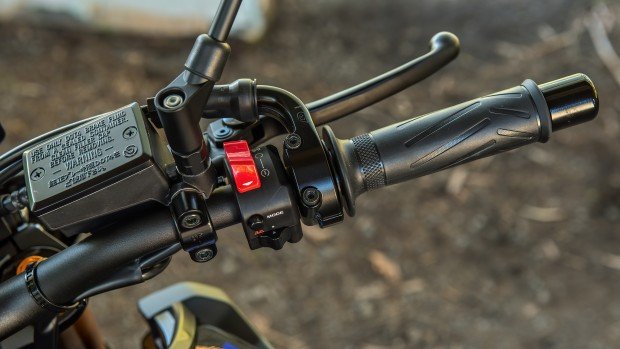 There’s the Mode button. The Traction Control button is on the other switchblock.

Come the relentless twistery of the Ten-Mile, the surface is mostly good, so you can relax a bit and concentrate on your lines. The Salty Puncher is glorious through here. Changes of direction are smooth and fast. And you might want some of that if you turn in a touch too early and the rock wall is offering intimacy.

Man, that engine is a beauty, I remember thinking time and again, as I worked hard at not dying in this section. Coupled with the premium suspension, this was now an even more serious scratcher than it had been before. 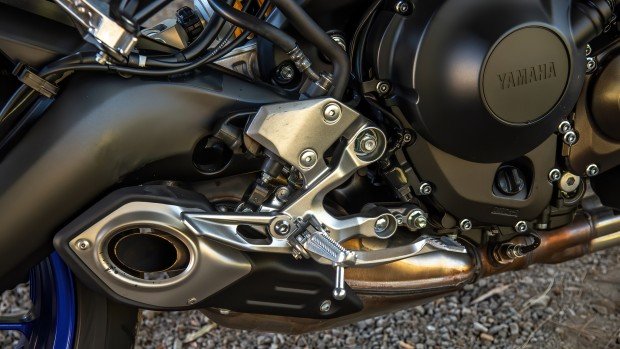 I like how Yamaha has “integrated” the pipe into the overall bike. It went to a lot of trouble for something that’s going to end up as a spider nest.

Better suspension makes so much difference. Your transitions are smoother, your stability under brakes is better, the bike recovers from mind-corner bumps and line-changes easier – it’s the one mod everyone should make, but opt for buying an exhaust can instead. Happily, the Seminal Peregrine comes with the good suspenders already fitted, so all you’ll be shopping for is noise.

There are three engine modes and traction control (TC) on the Sorted Pangolin, and you’re free to dick around with them a bit. I was happiest with the throttle response in its less aggressive (B mode), and with the TC just on a touch. But you’re your own thing. See how you go in A mode. Rain mode is dull. I left it alone. Even in the rain. 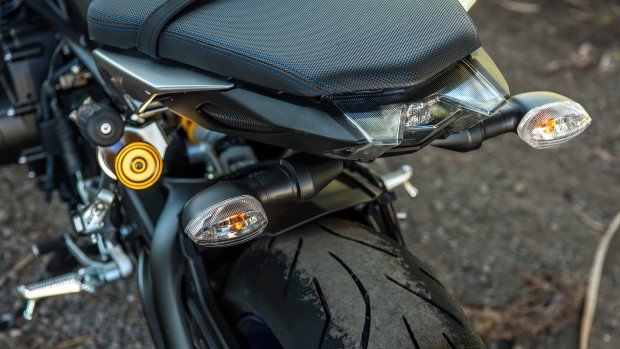 Contrasting blue stitching on the seat and that hint of gold. people following you will realise you are a person of quality.

The finish is lovely. It looks high-end and it is. Yamaha gives nothing away to anyone in terms of build-quality.

The Swishing Pantaloon only comes in one colour scheme, which is the one you see here. Yamaha calls it Silver Blu Carbon and paints its MT-10SP in that colour too, so it’s a bit special. 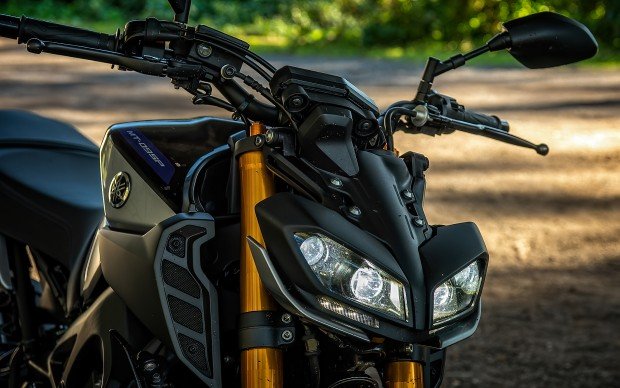 All eyes open and on. The headlight array is quite good at night.

As a hugely competent all-rounder it is brilliant. It tours, it scratches hard, it’s happy on trackdays, and it commutes with consummate ease.

If I was to nitpick it, I’d moan about how hard it would be to keep clean, how the horn is an eepy weasel, and how hideous the bulbuous stock pipe is. And all of that is nonsense, quite frankly. 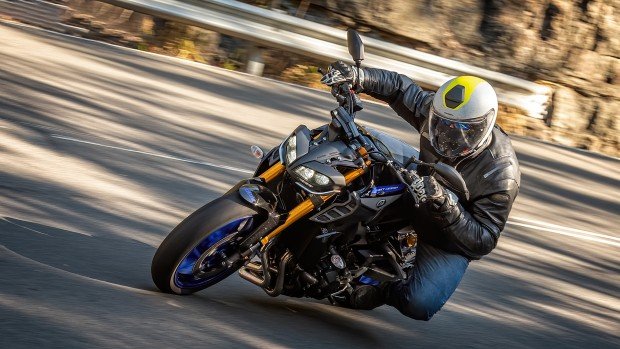 What I love about it is the sheer, unalloyed “rightness” of the whole package. The standard MT-09 is a great bike. The Singing Postman version nudges itself even higher up that scale for not a great deal of extra bucks.

What a fabulous idea.

Can you catch the falling controls in your hand?

Yes. I took them off. All of them, and had my wife throw them at me. I caught most of them. But the brake lever busted me in the forehead.

Could you rate the creaminess of its torque?

Well, if you could suck cream through a cream-pipe, it’s kinda like that, but with some saucy aggression added.

Speak to me of the glistening.

Yeah, that’s going on a bit. Especially when the sun hits it. Very glisteny. Except the black bits. They stay black.

Handling and rails. What even is that?

Look, if it was a train, it would be a small train. And it would go clackety-clack and stuff. Nothing you couldn’t handle, but.

YOU MAY EXAMINE THE SPECIFICATIONS HERE