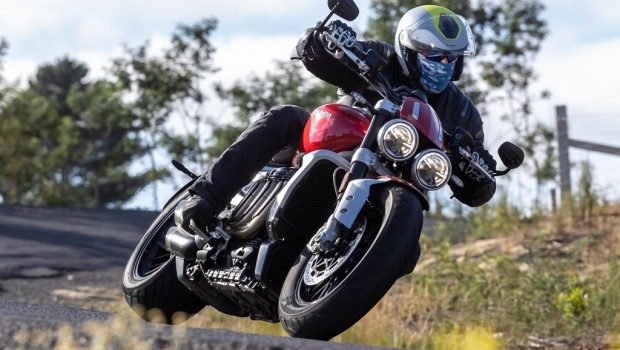 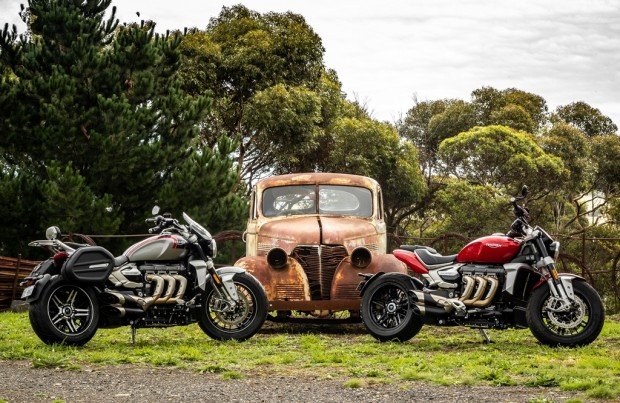 That rusty old thing in the middle represents the dreams of Harley riders.

Every once in a rare while, the world produces a motorcycle that is unlike any other motorcycle ever made. Astride it, one feels supremely magnificent – like a Dothraki Bloodrider coursing into battle…or maybe that’s just me…

Anyway, that bike then instantly becomes an unforgettable and indomitable pinnacle of motorcycle design which can only be admired and desired – but not copied.

And it cannot be copied because it occupies another plane of motorcycling altogether, a wild, lunatic plane of incomprehensible torque figures that look like a misprint.

This is the second time Triumph has done something like this. 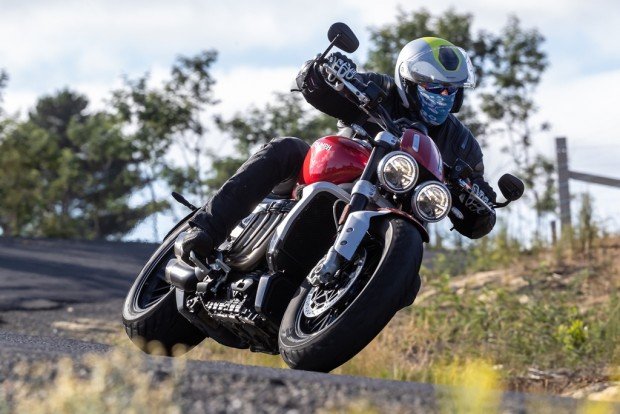 The first time was when it created the original and previously-impossible-to-conceive-of Rocket III. A 2.3-litre motorcycle carved from the deep bedrock of torque; massive and elemental, with a road presence others could only envy, but that rode and handled rings around other massive bikes – and some smaller ones as well.

In 2020, the bedrock of torque turns out to be deeper than we ever imagined. Triumph has doubled-down…hell, it’s actually gone all in, and produced another Rocket – the all-new Rocket 3.

And things will never be the same again.

Forget everything you think you know about powerful bikes. Nothing you have ever ridden can even compare to a Rocket 3. 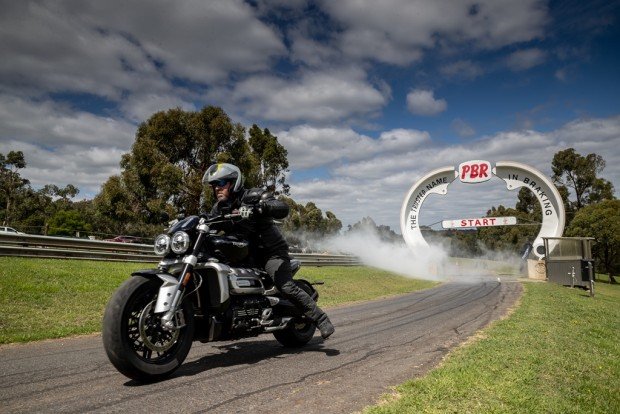 It’s simple numerals – and they never lie. There is nothing you can buy right now, off-the-shelf, that produces these numbers. There’s very little you could buy in terms of aftermarket performance parts that would deliver these kinds of numbers either. And if you tried, the cost would be ruinous, and the result unrideable.

Think about that for a sec. Try and comprehend that number. And at what revs it is being produced. 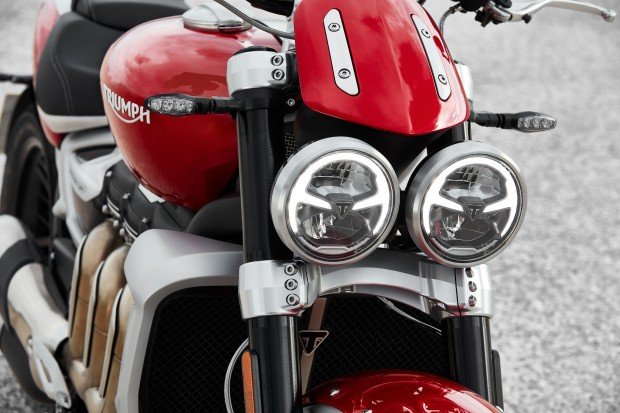 Some of the best-looking running lights out there.

Quite suddenly everything feels like it’s breathlessly panting just trying to keep up. No Harley is even in the game. Indian cannot compete either. The only two bikes that kinda feel like they could mount a challenge are Ducati’s Diavel and Yamaha’s V-MAX. But even they don’t make those numbers in the rev-range where it counts – and in the Rocket’s case, that’s right off idle. 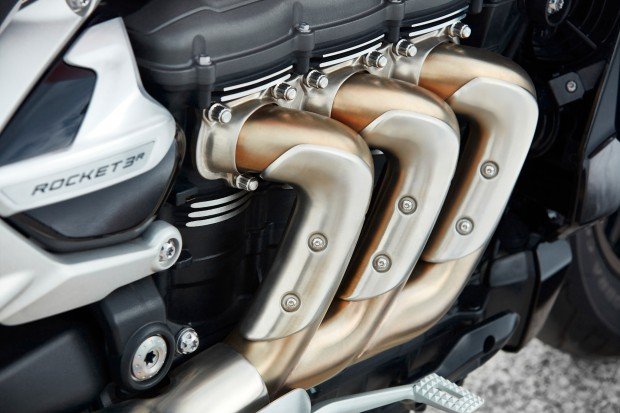 The pipework is stunning.

This is grunt like you’ve never imagined it. Inconceivable grunt that is available everywhere all the time. And I am not overstating that.

I thought everyone else was overstating it when I was looking at the on-line stuff from overseas.

Piss off, I thought. How’s anyone even make 221Nm work on the road? It can’t work. Bloor’s gone mad and is just chasing numbers to impress girls or something.

And then I was graced with an invite to the Australian press launch. 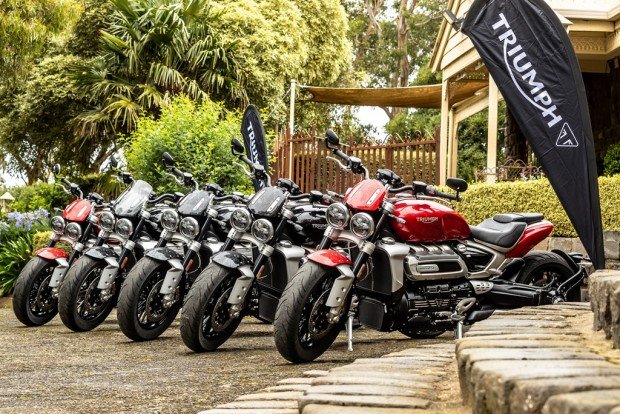 Two days later, I got off the Rocket 3 and I have spent the time between then and now working out how I was going to write this review when no-one actually has any terms of reference.

The Rocket 3 really is something quite unique, as the press launch revealed.

There was a bunch of Rockets, both the GT and the R versions, parked outside where the Australian motorcycle press corps was tucking into its brunch. I’d inhaled my prosciutto and cheese, and rushed out to behold the monster I had only ever seen online.

The bike looks and is quite different to the old Rocket 3 – which was a gargantuan act of barbaric motorcycle brutality – like a massive war-hammer. 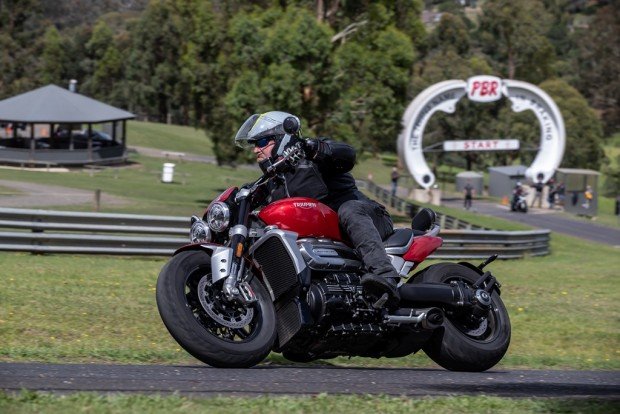 I rode this hill so many times. It still terrified me. Which was great.

The new Rocket 3 is a sword. A big-two-handed one, for sure. But it now slices rather than bludgeons.

It lets its engine do all the talking – both in terms of performance and styling.

Rather than making that huge slab-sided alloy lump just part of the whole King Kong exercise like the original, everything around the donk has now been pared, tidied, and integrated to highlight one of the most brilliant motorcycle engines ever made.

A TRIUMPH OF STYLING

The bike itself is far more modern and homogenous – a totally complete and thought-out new design exercise. It’s sleeker. It’s sharper. It’s build-quality is through the roof.

It’s a massive 40 goddamn kilos lighter (the aluminium frame is half the weight of the old unit, the engine is 18kg lighter, while the whole drivetrain has been Jenny Craiged by 32kg), and it’s got some really high-end tech in it. 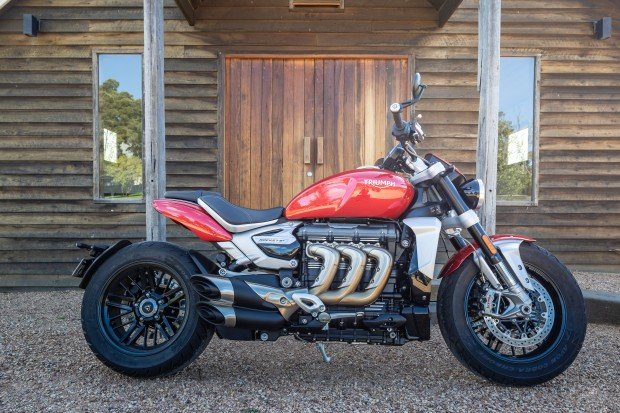 So much more refined than the old one.

All eyes are, of course, on that beastly menhir of an engine. It is no longer the indifferently-piped steam-punk stove it once was. The curve of those gorgeous pipes as they exit that monolithic motor is spot-on.

The barbaric brutality aesthetic of the old Rocket has been beautifully transformed into something more sleekly modern, but still menacingly broad-shouldered.

Cliff, Triumph’s in-house technical Yoda, came up to me as I stared in a weird rapture at the new offering. 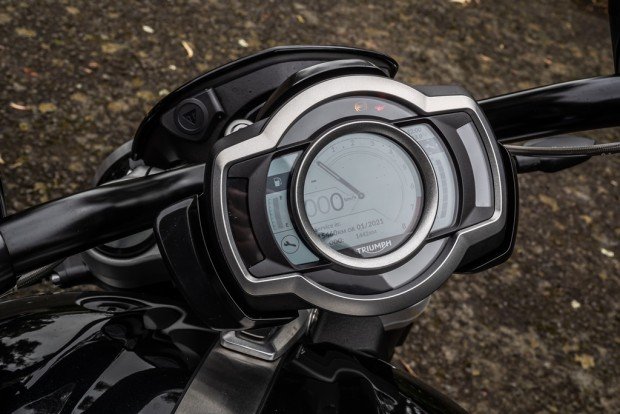 This can be configured a few different ways. It can be a bit busy in some forms.

“You know what you need to do?” he whispered.

“Speak,” I whispered back. “I will immediately do what needs doing.”

“You need to red-line it in second, third and fourth.”

My stupid grin was not lost on Cliff.

So I did just that during the launch. A few times. Just to make sure of…um, stuff.

Ladies, please understand that horsepower is a wondrous thing. But torque…well, torque is God.

And redlining the Rocket in those gears is feeling His hand propelling you at the horizon with such ferocious intent, you’ll be holding your breath and slitting your eyes. It’s revelatory. And smooth. Sure, you’ll feel a bit of a thrum when the revs start to climb over 5500, but that just adds to the experience rather than detracting from it. 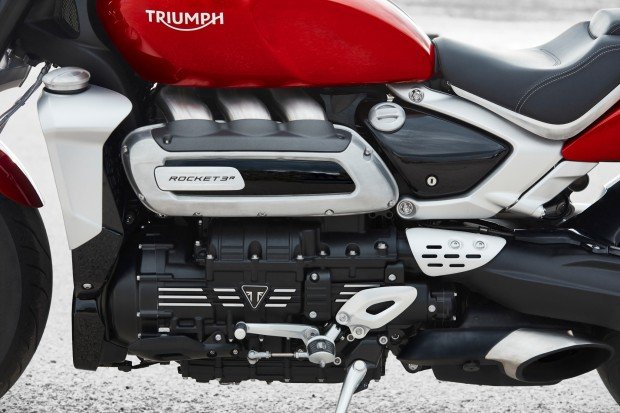 Around corners the new Rocket 3 is a far better proposition than its previous incarnation. The weight shedding and geometry deliver solid cornering backed up by pretty decent ground clearance. It doesn’t steer fast (did you expect it to? Tsk, tsk, tsk…), but it steers true, and so much better than the old one – and certainly better than anything produced in the USA.

The gear-change is slick (new helically-cut gears in the box and a hydraulic clutch), and shaft-drive is the right and proper thing on a bike like this. It is quite the buffed-up and modern drivetrain package.

The front suspension feels far more planted than on the old one (hardly a surprise) and once I got Cliff to dial up the pre-load on the rear top-spec, fully adjustable Showa with its sexy little piggy-back booster, it was pretty good. So good, only the Diavel can play with it in the bends. 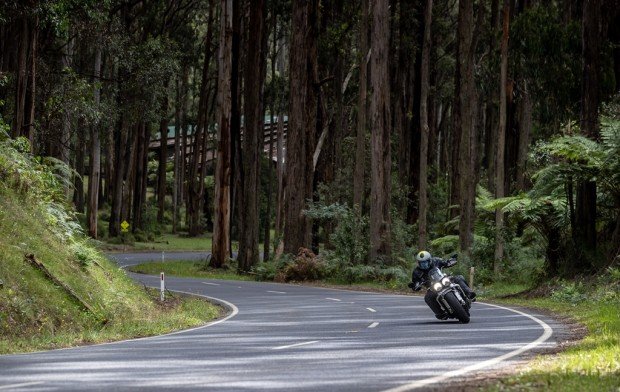 The riding position of the R made it my preferred iteration. The GT and its lower seat-height (750mm) is all cruiser – feet-forward and arms relaxed – and it’s certainly more disposed to…um, cruising, I guess. The R, with a 773mm seat-height) is a very different ergonomic proposition. It’s more aggressive riding posture lends itself to a more spirited interpretation of the Motor Traffic Act. You can cruise on it…but why would you?

Both seats are rather good at keeping you comfortable on longer hauls. Your pillion? Well, she wants to be a more petite model if you’re to be speaking at the end of a long day.

Triumph has also clearly decided its flagship monster will offer owners a level of finish that is quite amazing. This is one highly polished product. From the way the pillion pegs fold invisibly into the bike, to the tiltable and fully hectic TFT dash, to the clean, internally-wired handlebars – this is a quality motorcycle. Just look at the superbike Stylema Brembos at the front, and the brilliant radial-mounted four-piston jobbie on the 300mm rear rotor – which is, rightly so, the best rear-brake on any bike ever made. 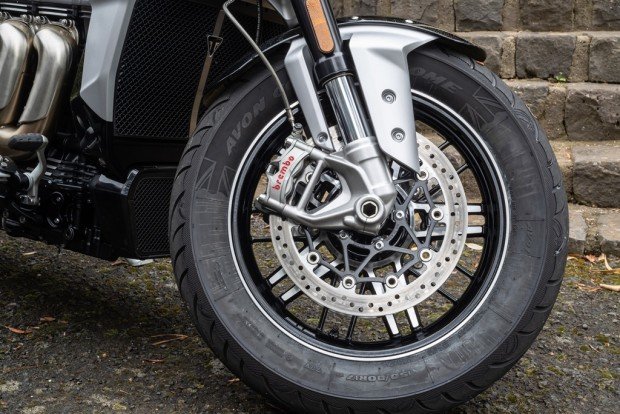 Clever touches abound. You can adjust the footpegs on either model, or even fit the R’s mid-controls to the GT or vice-versa. There’s a Bluetooth system (yes, it’s finally here) which will give you turn-by-turn navigation on the dash, and you can also run your phone and control your GoPro camera (that’s a thing now, apparently) via the handlebar controls. You also get hill-hold control, a USB port under the seat, cruise control, top-end lean-angle sensitive ABS, and there’s a range of more than 50 Triumph aftermarket goodies – heated handlebar grips (standard on the GT), tyre pressure sensors, bling, and a bunch of luggage options because you will struggle to strap anything to the stock models.

I loved the old Rocket III. 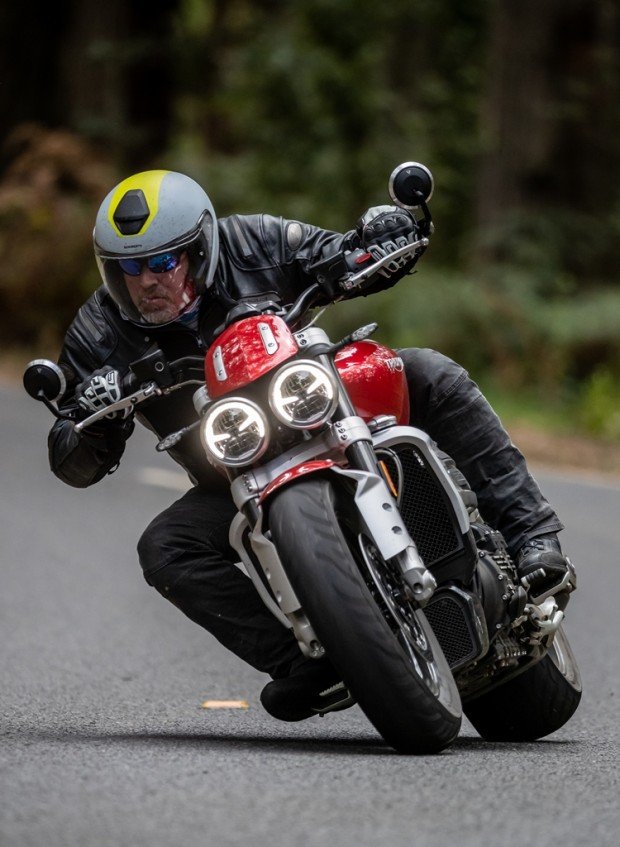 But beside the new Rocket 3 it is as dust.

Some people will buy it just to relish the expression on peoples’ faces when they’re told it’s a 2500cc motorcycle. It’s worth the price of admission just for that experience alone.

Other people, with fire in their hearts and a screaming licence in their pants, will buy the Rocket 3 because it is a brilliant and unique motorcycle – the pinnacle of the engineer’s craft, as it were. Polished, potent, and pleasurable at a level, few, if any bikes like this can even hope to approach. 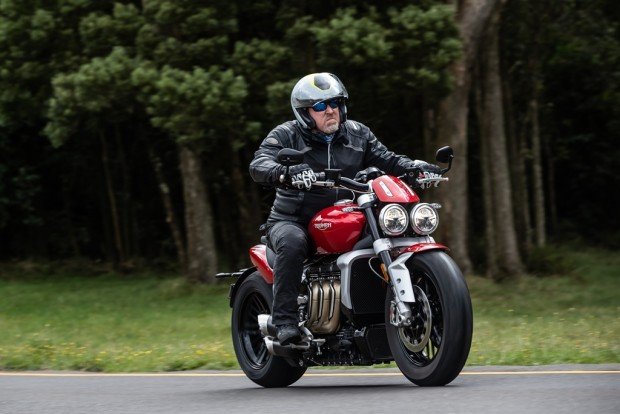 “Did I leave my phone-charger at the hotel?”

WHAT COLOURS DOES IT COME IN?

The GT comes in black, or grey with a red swoosh. The R comes in red or black. 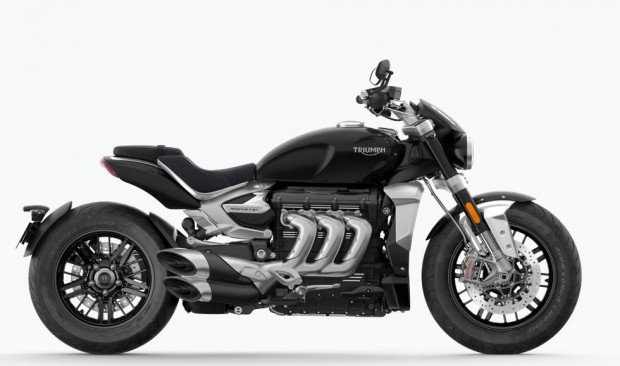 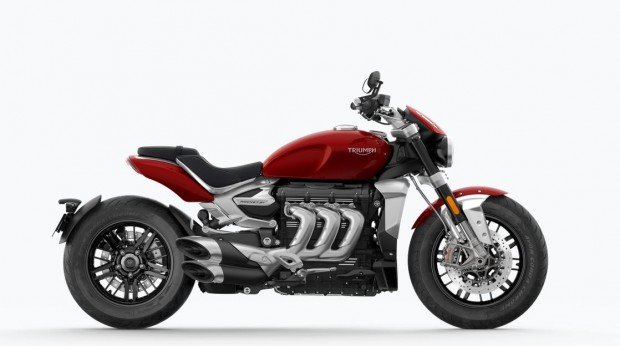 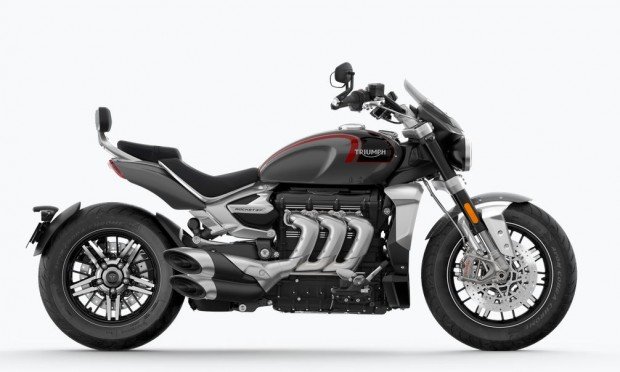 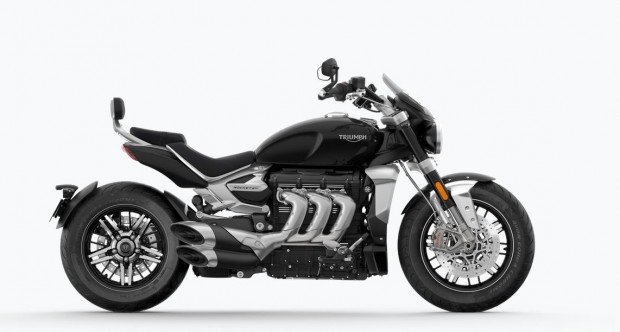 YOU CAN FIND THE SPECS FOR THE R HERE

YOU CAN FIND THE SPECS FOR THE GT HERE