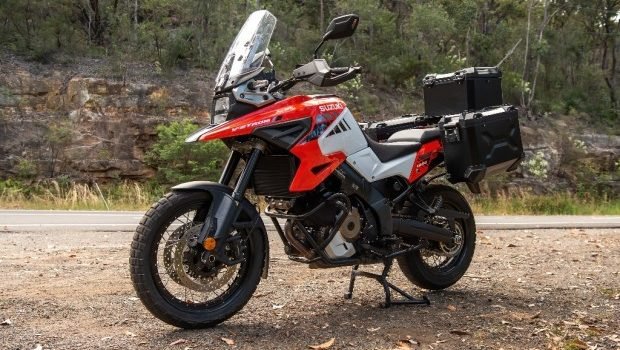 IMAGES BY NICK “NO, I DON’T KNOW OF A NEARBY DESERT” EDARDS 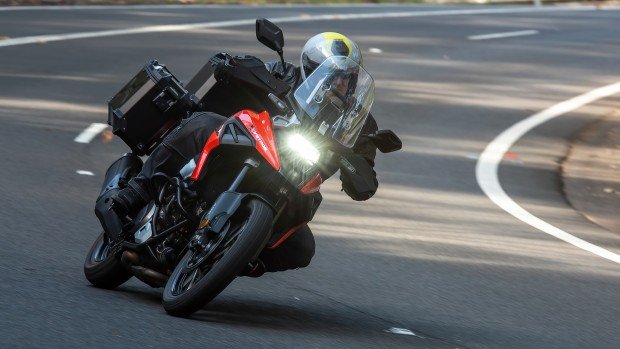 Go ride one and be amazed.

Did any of you feel the fizz among the UVSC (Universal V-Strom Collective) when Suzuki announced there was a new V-Strom coming?

I did. It was palpable. I think the barometric pressure changed and there was a slight tectonic shift somewhere near Djakarta. There was certainly a pleasurable moaning in the ether. 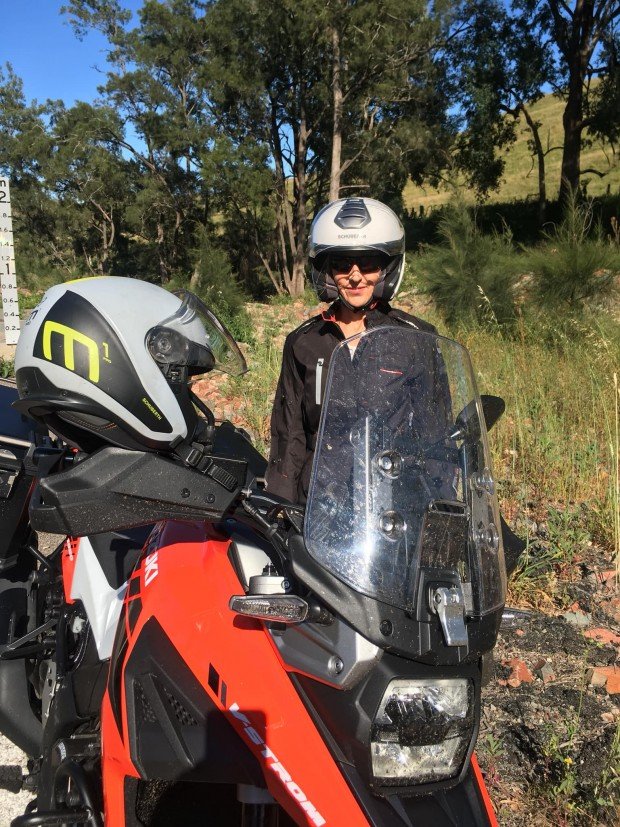 Lynette’s become one of the V-Strom’s biggest fans.

You can’t blame them though, can you?

It’s about time Suzuki blew the dust off one of it’s most beloved and iconic models. 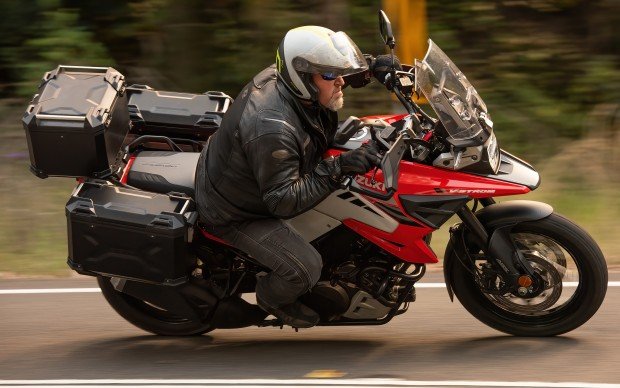 I will confess immediately that I am a fan of the V-Strom, and have been for some time.

I have always loved its simplicity and its honesty. It’s kind of like the good-hearted Quaker of the Adventure bike segment. It will always acquit itself honourably on the dirt – provided it’s not too gnarly – and it can be relied upon to gobble road-miles with comfort, ease, and granite-like reliability. Ridden well, it has been known to terrify and demoralise lesser riders on “faster” bikes – that twin-spar alloy chassis is no-one’s bitch. 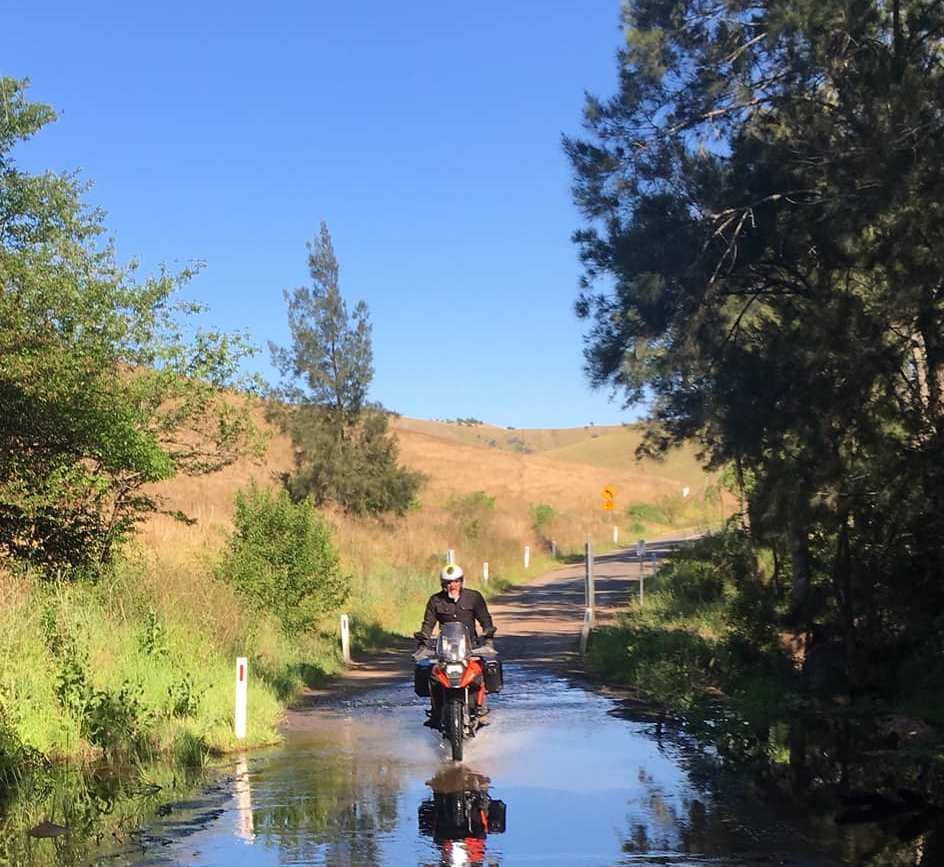 As a value-for-money prospect, compared to the Euro offerings, it’s always shone like a diamond.

The diamond still shines and now it’s been mounted in a new setting. 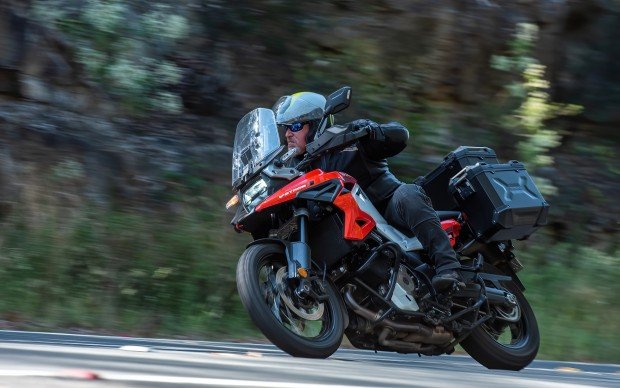 Probably the fastest top-box in Sydney that day.

A quick technical overview and then we shall move on to the riding of, both one and two-up – and I did spend a lot of time two-up on the new Strom. My wife, Lynette, loved it as those of you who follow me on Facebook will remember. She still reminisces fondly over its comfort and shamelessly compares everything I bring home to the V-Strom. If I didn’t know her better, I’d say she’s was a card-carrying member of the UVSC with a better manicure. 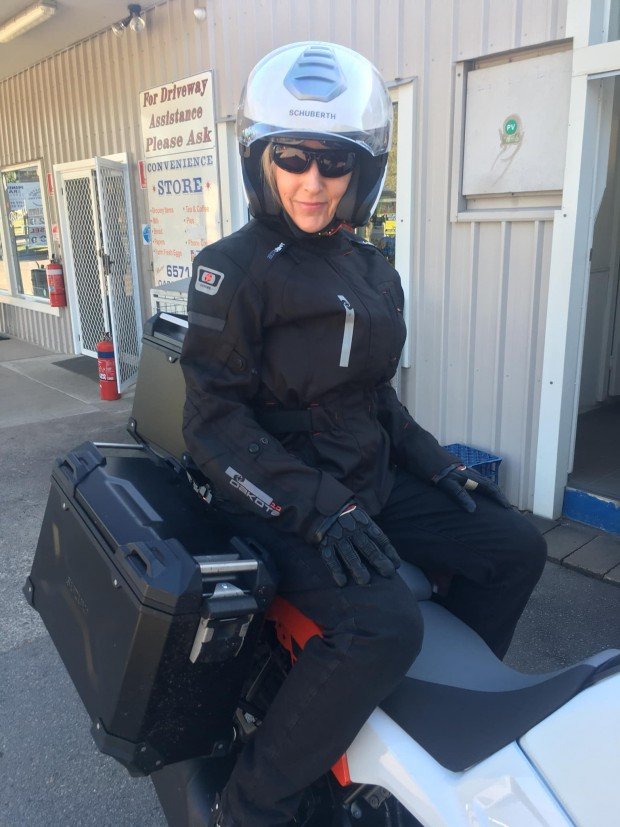 Lynette loved the pillion seat, and would not allow me to take off the panniers or top box, saying it felt more secure with them on. That’s my fault. All my fault.

So firstly, Suzuki re-styled it, and for my money, made that a success. Echoes of the DR and all that. It even painted mine this sassy red-orange colour that reminded me of that special Ducati colour Bologna used some time back, and for one year only. But you can have a yellow one if you must. 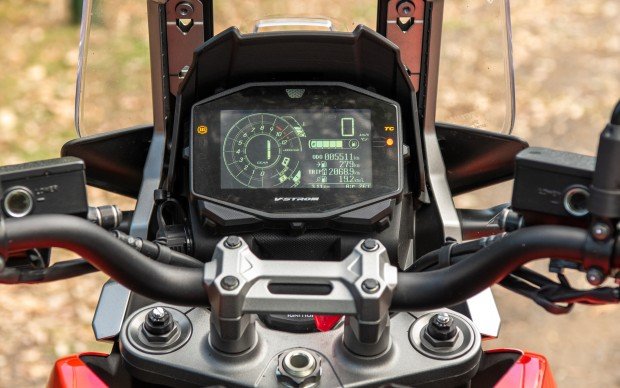 Secondly, the 90-degree V-twin motor is bigger, obviously. It now chugs out 106 horsies (but they are big Clydesdale-type horsies with a touch of stubborn mule about them), and 100Nm of the finest and creamiest torque you’d find this side of a French dairy – such is its shiny creaminess. It’s hauling some 240-odd kilos around, so she’s not a small girl. 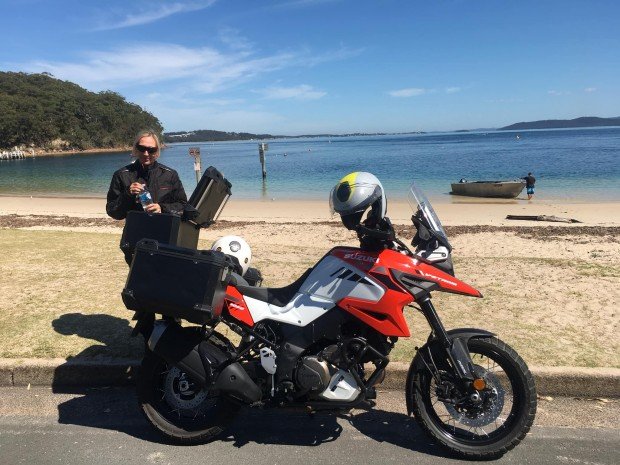 The day we went to the beach, my wife informed me her Dior lipstick had melted in the top box. If Suzuki could offer a refrigerated option going forward, that would be nice. 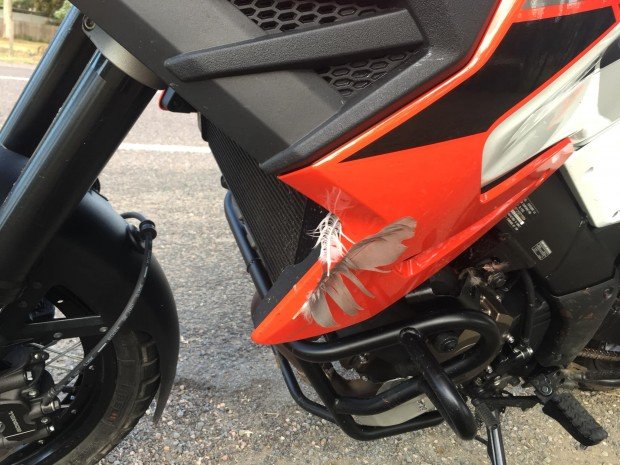 The day the duck died. I was sad. No, really.

It is happiest and most willing between 3000 and 5000. You can ride it like a mouth-foaming madman in that rev-range – the twistier and gnarlier the road, the better. Few bikes offer you that kind of front-end voodoo.

So it’s punchier than its ever been and it’s also more electronically aligned with the times and expectations. 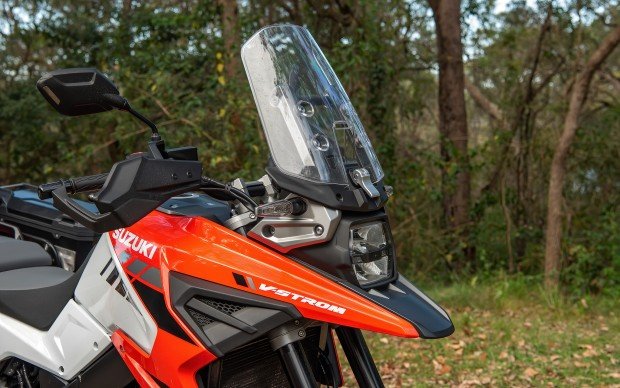 Suzuki offers you two types of ABS intervention, on- and off-road, cornering traction control, a hill hold braking system that will stop you sliding into a ravine when you stop to ask your missus why she is screaming. There’s also Slope Dependant Control (stops you flipping it if you’re flying down a hill and feel you need to apply all the front brakes all at once). Yes, there’s cruise control, but no heated grips as standard, which is strange. 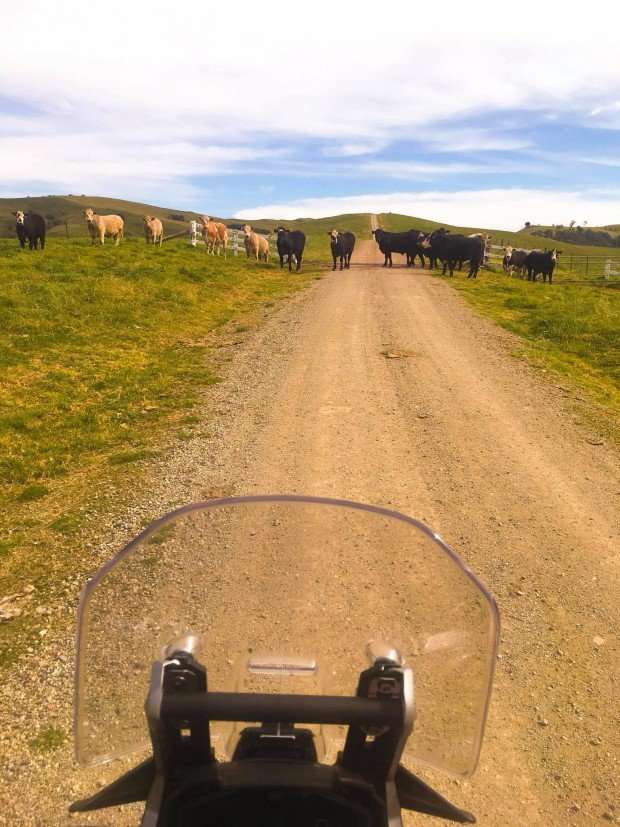 Missed every one of them. But they did look delicious.

Three rider modes, One, Two, and Three. One is the zestiest with the least TC interference. So that’s where mine lived.

The seat, both for rider and pillion, is superb. It looks pretty high-class and is narrow enough at the front to make reaching the ground easy. And it’s as comfy a big-mile prospect as you’d ever need. Top marks, there. 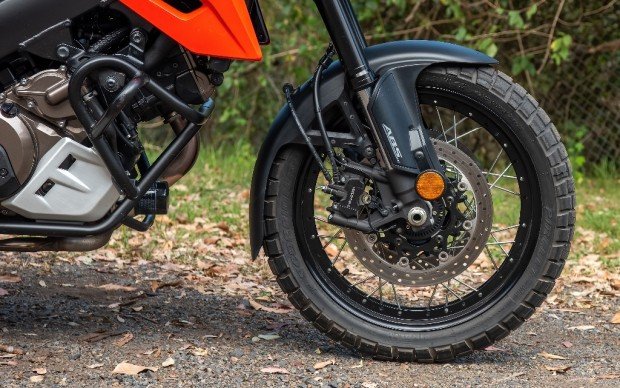 Great stoppers. The rubber was pretty good on the road, too.

The screen is adjustable, but you have to get off the bike to do it. That’s hardly a biggie. Don’t be lazy. You have 11 positions to choose from, apparently. And here I was thinking it was Highest, Lowest and In The Middle. 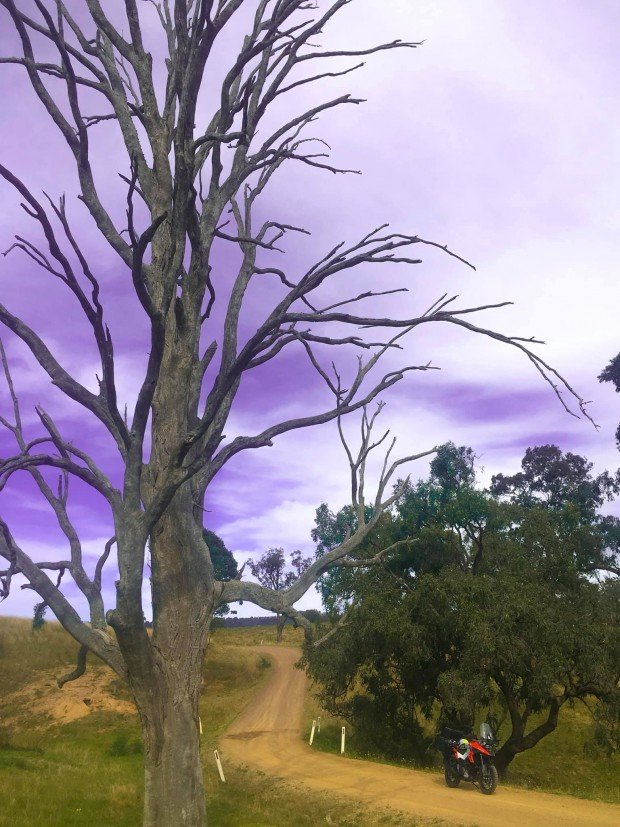 I even liked the dash, which has lots of information, none of which irradiates your eyes with full-colour laser beams. It’s olde worlde look kinda goes with the whole philosophy behind the V-Strom – “I’m a Quaker, sure – but I can still fight hard in a pit come harvest time, neighbour…”

Underpinning all of the very welcome newness, the remarkable familiarity of the V-Strom remains. It will feel familiar and “right” even if you’ve never ridden it before. Therein lies its special magic and the reason it has such a massive cult-like following. 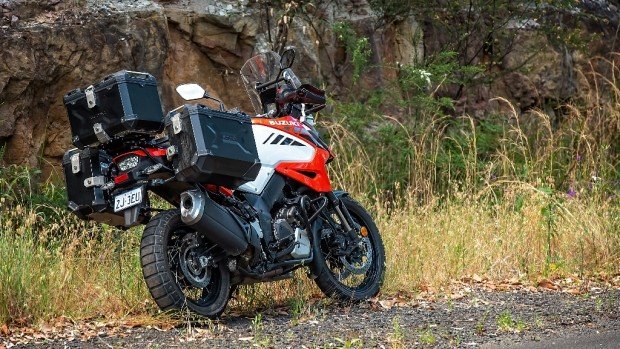 You can get quite a lot into those bags – but if it’s lipstick, it will melt. Ask my wife.

It can scratch like a 1000 bastards on roads that would terrify sportsbike riders. It will do easy dirt with aplomb (if you do a lot of dirt, you might want something with a bigger front tyre), and it will tour with ease and superb comfort.

The whole vibe of the V-Strom is one of competence and smart-money buying. People will look at you and think you might know something they don’t when it comes to big Adventure bikes. All you have to do is smile knowingly. 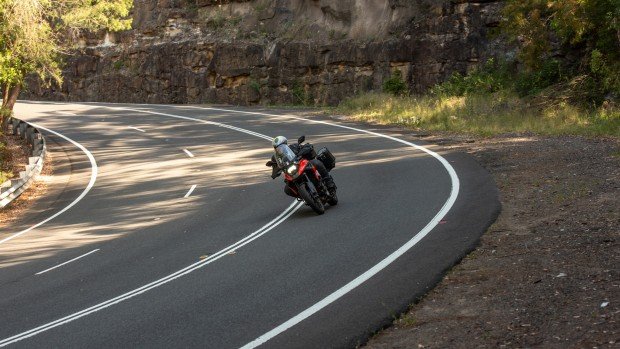 Sure, it’s more road-focussed than dirt-oriented – but then it always has been.

So what needs some work?

Well, with the massive black luggage fitted, climbing on and off is a process, both for the rider and the pillion. Lynette always had to mount first when we went riding.

The centre-stand is a Feat-of-Strength thing. I’m OK with that. You weaker blokes might not be. Go to the gym. You’re meant to be strong. I thank Suzuki for reminding you all of this.

Heated handlebar grips should be standard equipment, not an aftermarket item. Just sayin’. 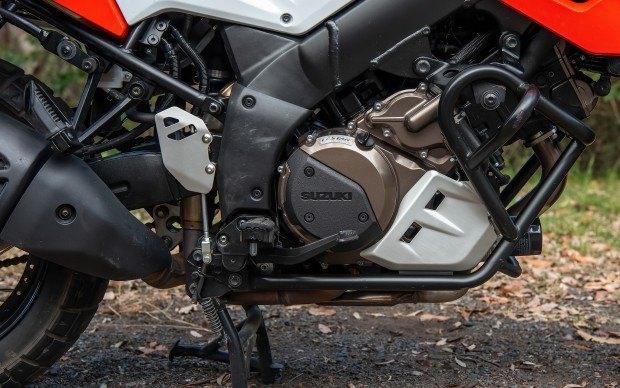 It’s not a pretty motor to look at, but it’s certainly beautiful.

Oh, and the tyre valves need swearing at. They are awkward to access. Angle them next time, please.

The headlight is not bad. Straight off the Katana, I believe. So it’s a better jobbie than was ever on the V-Strom before in terms of offering lumens to the Creatures of the Dark.

But all in all, an excellent and solid step forward for the beloved V-Strom. If you liked the old one, you’ll love the new one.

It’s a shinier and very familiar diamond in a whole new setting. 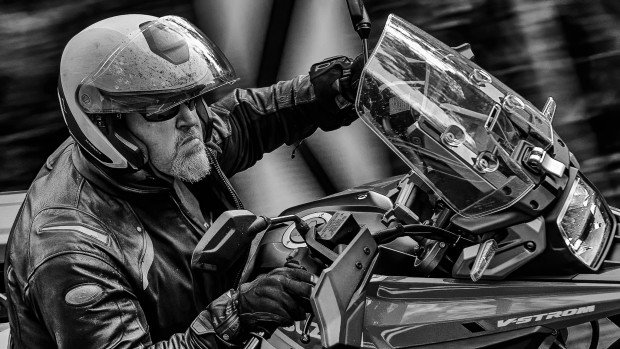 HOW MUCH? $20,990 RIDE away ($17,990 for the base model without the centrestand, hill hold electronics, cornering ABS, engine guard, hand-guards…all of which will cost you more than three grand to fit)