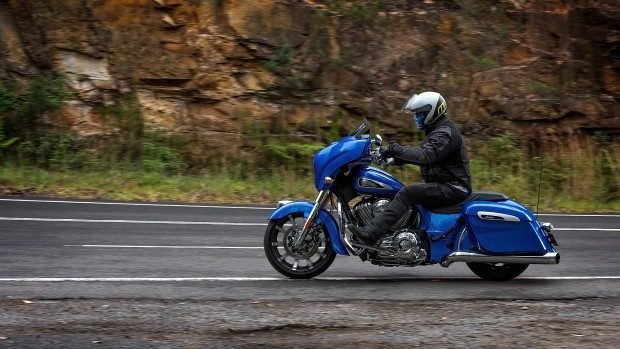 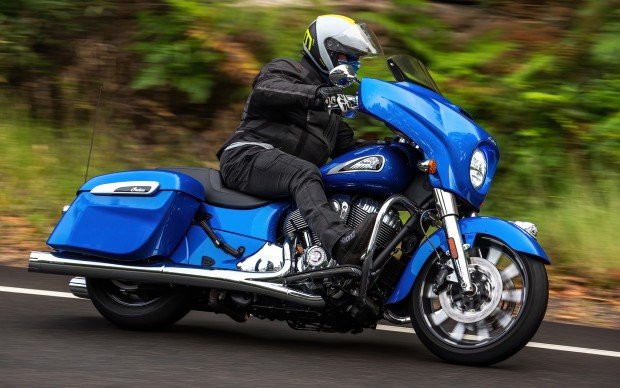 The positioning of the footboards and crash bars is clever because you can rest your feet on the crashbars or leave them flat on the boards.

My tattooed parts combine with my memories whenever I throw a leg over a big American cruiser and fill me with an evil joy. I do so love these big thundering beasts for a whole bunch of reasons, not the least of which is how they make me feel about myself. And that is a combination of majestic, malevolent, and “Man, just listen to that rumble…” 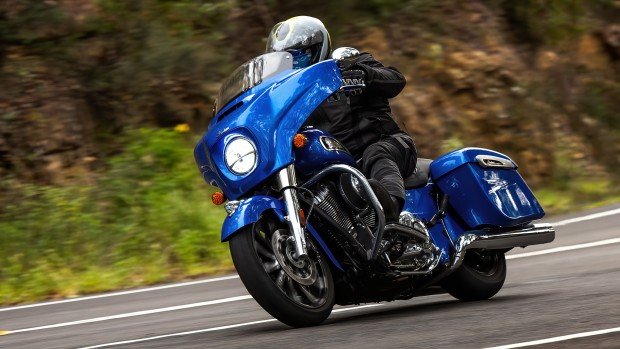 It was a bit damp that day, so there are no sparks.

I’m sure you’ll not be surprised by the difference five-cubic-inches makes. That wonderful engine – which you’ll recall is the legendary S&S X-Wedge mill with Indian clothes – benefits greatly from the increased capacity.

In this market, size is everything, and you’ll be aware of the leap-frogging capacity-games Indian and Harley play with each other. 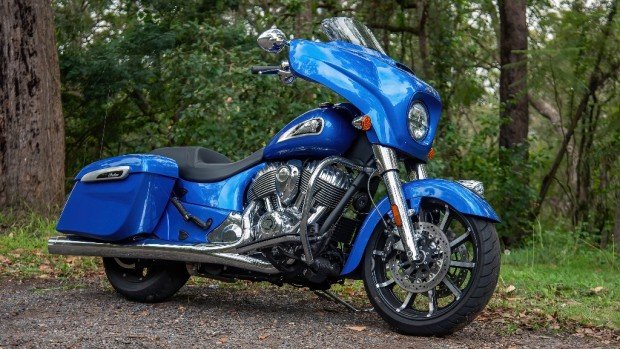 It does match my eyes, no matter what Edards thinks.

The Thunder Stroke 116-cube variant is a cubic-inch down on the H-D at the moment, but not so’s you’d notice.

The 2020 Chieftain Limited is not all things to all men, but if you’re scratching yourself wondering if a big Yank bagger might be just the thing to see some sights on, it would be where I’d be putting my money – and more on that later. 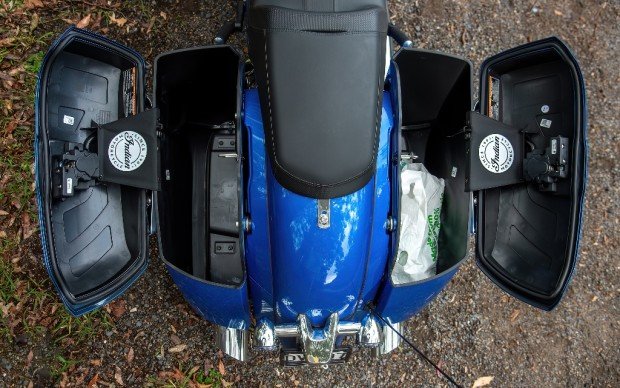 While you admire the size of the panniers, spare a thought for how hard it was to get Edards into a tree for this shot.

But at a healthy touring rate of 120-140, it is rumbly smooth, which makes it a real mile-eater. The end-caps Indian had on the stock exhaust give it a pleasingly deep grumble which the cops shouldn’t mind. Doesn’t mean you won’t get bashed. Just means you probably won’t get defected. 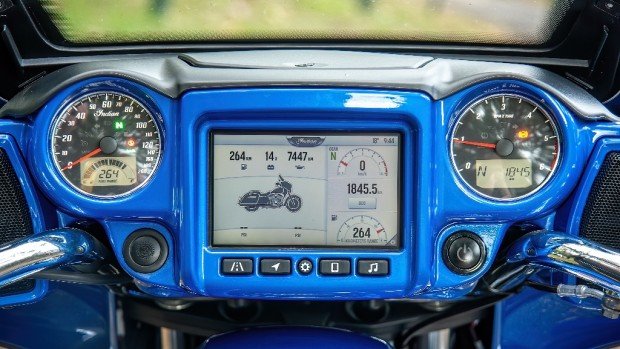 Sure, there’s no Netflix, but there’s everything else.

Its downside is the engine still chucks off a bit of heat – especially where your tender right-thigh meat is. This is not really noticeable at speed on the highway, and most welcome in cooler conditions, but a pain in the thigh during a summer commute in traffic.

In terms of handling, I’m thinking it may surprise some doubters who have not ridden such a majestic beast. It does alright. Just plan your stuff a little in advance, OK? The 19-inch front wheel greatly assists its relative agility. 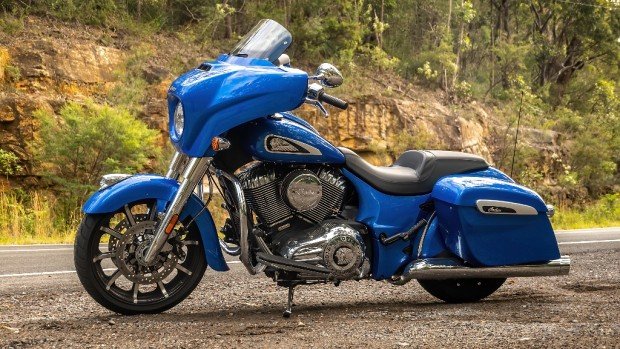 If only someone would build a pub right here.

The electronic windscreen all the way up does an excellent job of keeping the 100-Watt, automatically adjusting stereo listenable at 130, and when fully down, blasts your face with air. I cannot ask for more than that.

The TFT screen is glove-finger friendly, and there’s a lot of stuff going on there. Bluetooth connectivity, sat-nav, USB thingy, keyless ignition, tyre-pressure (actually the entire bike is kept an eye on) monitoring, and all sorts of stuff the sale-bloke will be overjoyed to walk you through. It’s quite a sophisticated package. 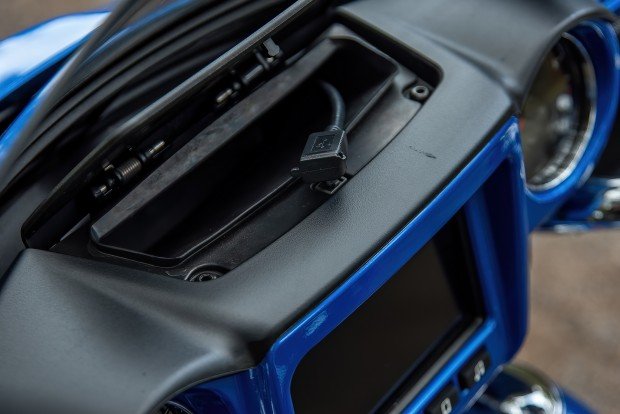 This clever little compartment is perfect for your phone – USB charger and all.

The panniers lock remotely, but won’t fit a helmet (non-caring shrug), and the new seat (called a Gunfighter, of course), allows long hours in the saddle without stress. The suspension certainly assists that rider comfort. It doesn’t travel much, but its quite well damped and only the most cruel of bumps hit at criminal speeds will upset it.

The fairing has been redesigned and I don’t mind its new neo-Brutalist angles. It certainly works. 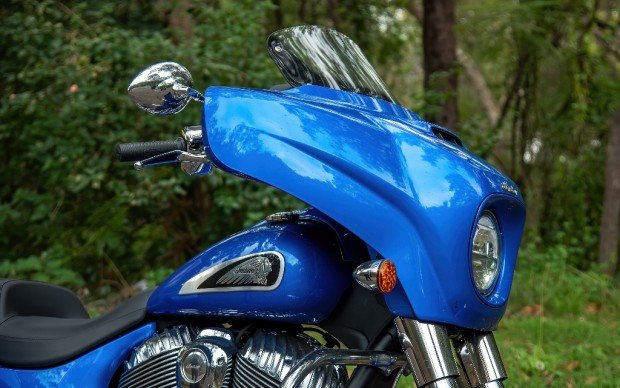 My beloved wife spent some time on the pillion seat. She only began to complain after three hours, two of which were spent racing Al on his Tracer up the iffy surface of the Bylong Valley Way, so I cannot blame her. There are better options for two-up touring if you’re going to do big miles, but the Chieftain Limited works just fine for all-day Sunday cruises. And she has to hang onto you, and we all know that can result in all sorts of excitement. 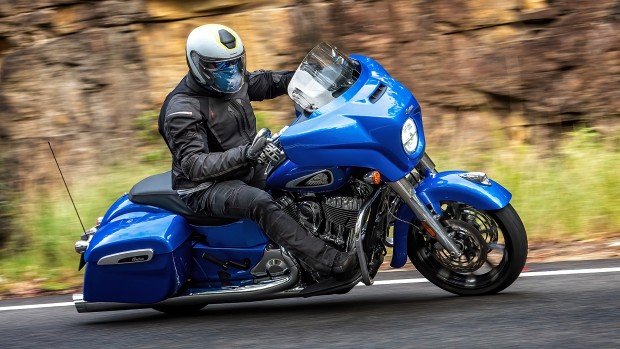 I did my best to colour-match my face-sock. Don’t you judge me.

So here’s a giant motorcycle which is far more agile than you think, goes harder than you’d expect, and offers a rewarding level of majesty and grandeur to the rider.

And we all need a bit of that in our lives. 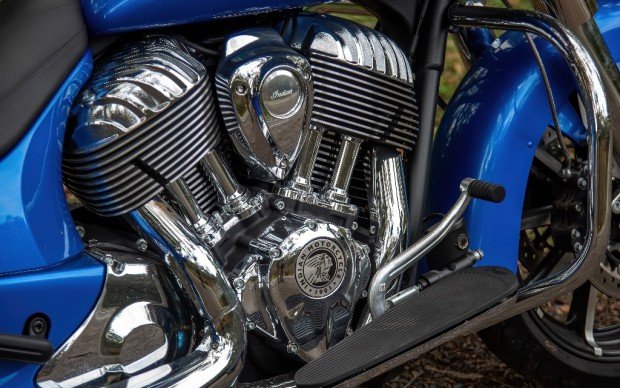 It is an engine for the ages.

I have no intention of converting anyone’s views about the Indian versus Harley thing. All I can do is give you my considered opinion.

And that is quite simple.

I would buy the Indian bagger over the Harley bagger every time. And for the right reasons.

The Indian is a better bike. From an engineering standpoint, it is a better-made bike. It handles better, the suspension is better, the brakes are better, the TFT screen/computer thing is better, and it feels like a physically bigger bike to ride, allowing you to spread yourself out a bit, as it were. It steps out in a more lively fashion (that 116 is no slug), and in really tight, sketchy stuff, the Indian feels more sure. Especially in the rain.

I think Indian has focussed its powers on creating a more rewarding bike to ride, rather than just relying on image to move its product.

They both weigh about the same tonnage, and offer equivalent levels of electronics and luggage, and so it will come down to what an individual likes best – so that’s a combination of looks and road-feel. Harleys sure look great, but the Indian feels better to ride. Especially if you like to push a bit harder.
And then there’s X-factor.

The X-factor is what has been selling Harleys for decades. It’s that ineffable outlaw link the marque has, and which so many of its customers like (or liked) to rub themselves against, if only on weekends.

And it is precisely this glamour which has now, ironically, come to bite Harley on the arse. Its greatest marketing success, the Harley Owners Group (HOG) is now its greatest liability in terms of making its bikes appealing to a younger market.

They just don’t. Legions of doddery grey-beards and their blowsy spouses are light years away from the strong, tattooed beasts with slim, killer blondes tucked behind them – which is what sold me on the whole paradigm decades ago.

Indian does not carry that baggage.

It certainly carries the heritage aspect that Harley does, but it comes without the dumb Fit In or Fuck Off attitude, cheesy hat parades, flag-flapping processionals, and general insipidness of the HOG crowds.

I know this because I have spent time with both tribes.

And I know which I greatly prefer. 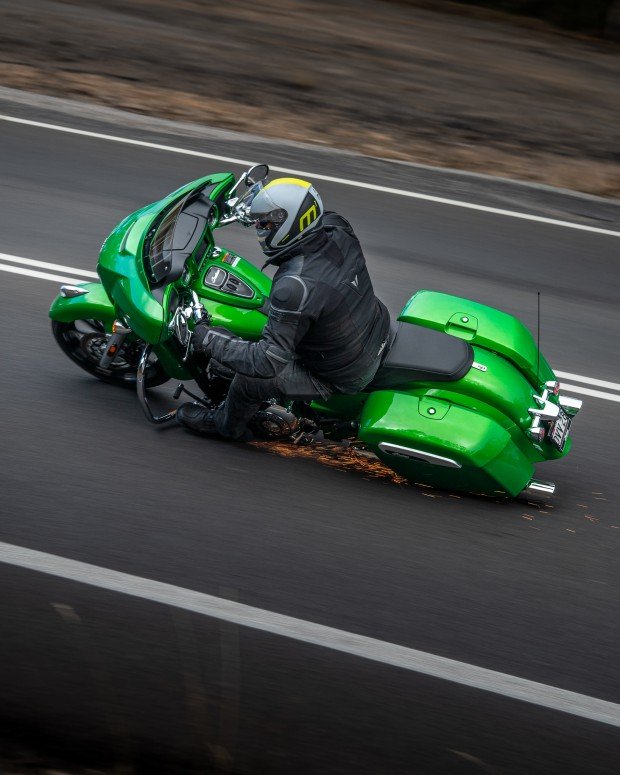 It wasn’t wet when Dave and I shot the green one.

THE FALL OF THE CONTROLS

The switch-blocks are big and very chrome. It would be nice if the switches were backlit, but they’re not. And since there’s a few of them, it will take some remembering what all the buttons do in the darkness. I sometimes wished my hands had an extra finger. The horn sounds meaningful and the headlight blazes like a thousand bastards, but I would fit the extra lights which are available as aftermarket bling. There’s a clever amount of doubling up on the controls as well. You can use a switch-block or stab the screen for a bunch of stuff.

THE CREAM OF THE TORQUE

There is almost two dairy-farms worth of earth-moving might here. And it sure is creamy. Like, thick and glistening with milk-fat creamy. Possibly six Brown Swiss levels.

THE SPARKLE OF THE PAINT

Out of the ball-park sparkle, pilgrims. Speckled with the fire of a billion alien stars, that paint is simply next level. It comes in black, blue, and a black with rather handsome grey and red graphics.

ALL THE SPECS AND MORE INFO CAN BE FOUND HERE