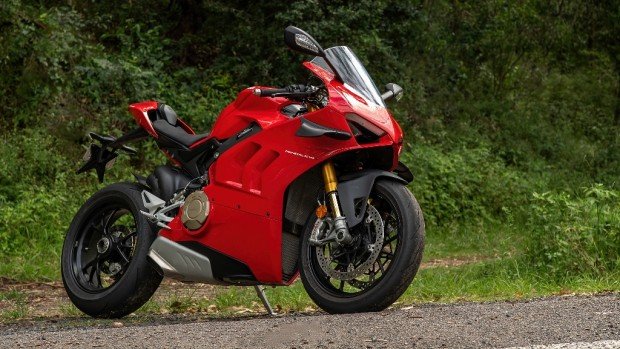 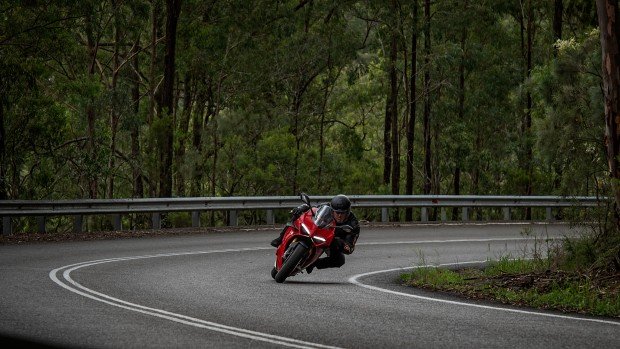 This is me being surprised.

My time with the Panigale did not go as planned.

Instead of my usual “Ride it around some, go about your normal business, find some empty road, see what happens” stuff, things went a different way.

No-one was more surprised than me. I had already told myself I would struggle on the Panigale. I ain’t no superbike rider. I certainly have no business bellying up to this…this… impossible Italian fiesta of firepower. What the Hell am I gonna even do with 214-horsepower, 124Nm, and 175kg of computer-assisted, devil-red rage and rat-bastardry?

It is a handsome winged devil.

In pre-season MotoGP tests, this thing had just lapped Jerez a scant two-seconds slower than a bloody MotoGP bike. Ducati boss, Claudio Domenicali, was grinning so hard I thought his head would split open. I don’t blame him for beating his chest and making war noises. A production bike – albeit in the hands of apex-predator riders – lapping within two-eye blinks of a million-dollar prototype race bike? What the Hell is that even?

And what possible business had I with it? None, one would think.

Except, as it turns out, I had every business parking my belly on its tank, leaning forward to grab the wide clip-ons, and turning the black thing on the right.

Those numbers above? I figured I’d just ride them – as hard as I could. I decided, early on in the piece, to roll the devil’s dice and hope the Highway Patrol was elsewhere when the numbers made their meaning clear. 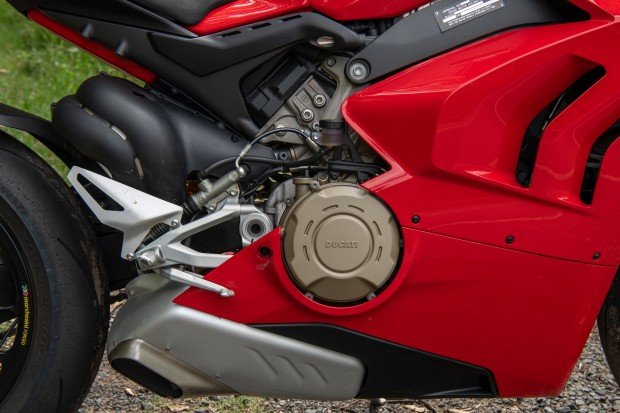 See that black thing just behind the peg? It’s like a blacksmith’s forge.

And the clarity they provided was very clear the moment I’d left Sydney’s traffic behind. Up until that point, I was on fire, and not in a good way.

But five kays into a deserted mid-week Mother Putty, I suddenly understood what those numbers meant.

The Panigale turned me into a worm. I squirmed and wriggled shamelessly before and after each ride, helpless before its superbly managed savagery. I could do nothing but abase myself before it. 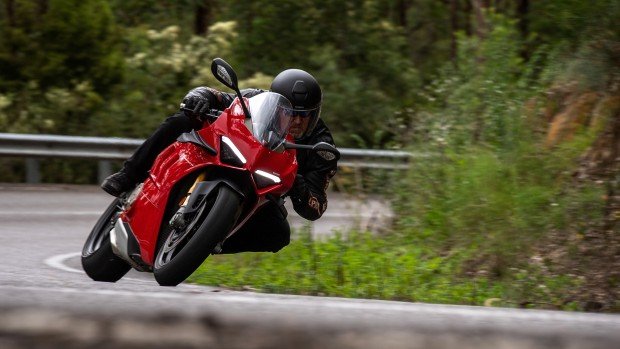 It has the ability to make the floppiest muppet faster than he thinks.

And it also made me into a serial killer – obsessed, psychotic, focused on nothing but the kill…erm, ride – and aching and sweating until the next kill…erm, ride.

To say I loved it would only be partially correct. I did love it, but I was also little insane about it. The Irish have the perfect word for it. Fey. I was as fey about the Panigale as an Irishman with a belly full of Guinness, a handful of broken fighting-bottle, and a Leprechaun for a slave. 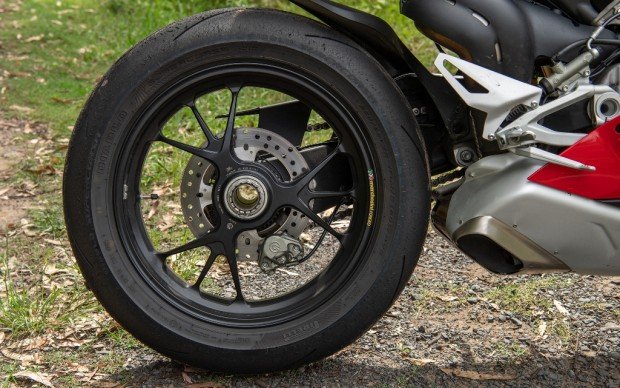 The Panigale was with me for ten days. I rode it every day. On some days, I rode it twice. I took it touring, for pity’s sake! I did one unhinged over-nighter to Gloucester via the pitiless broken bitumen of Gresford and Dungog. And then back again – dry-eyed and feral with intent.

Here I was, every morning for ten days straight, wheeling the Panigale out of my garage and heading for Mother Putty’s cruel and twisty brilliance. On days when I felt unfulfilled upon my return home, I’d wheel it out again in the afternoon and head back. I’m sure serial killers feel like this when they’re packing their kit-bags for a night out. 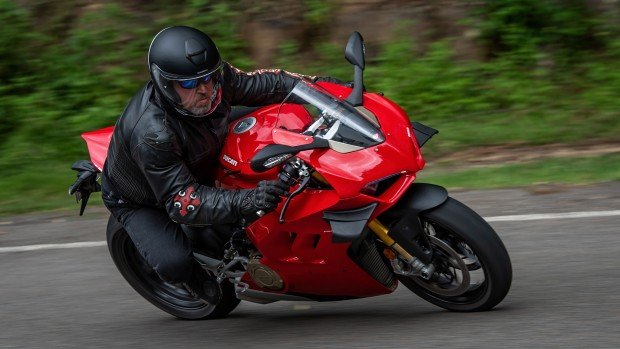 “You’re not right in the head,” my wife said to me on Day Five.

“That is hardly news to either of us,” I replied, pulling on my helmet as the Panigale warmed its greasy war-blood up – and you do have to warm it up – and prepared itself for battle.

And it really is. And you’d expect it to be. And you would not be disappointed. 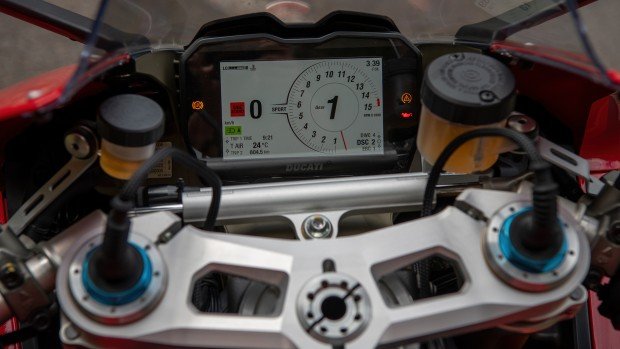 You will see numbers on here that will make you wee a little.

This is a $40,890 motorcycle. And it is worth every cent of the asking price. There is a $31,690 version (the Not S Panigale). For the extra money, the S comes with the brilliant Öhlins Smart EC 2.0 system that controls the suspension and steering damper – and that newly-calibrated suspension is Öhlins Nix-30 forks and an Öhlins TTX 36 rear shock. Oh, and forged Marchesini wheels, a Lithium-ion battery and sports grips.

Once you’ve set your feet upon the path of this particular damnation – you just keep on walking. It’s the only thing to do. Pay the extra money. You don’t want to be explaining to people who will come and stare at your Panigale (and they will) that you were too cheap to spend the extra dollars for the one with all the fruit. 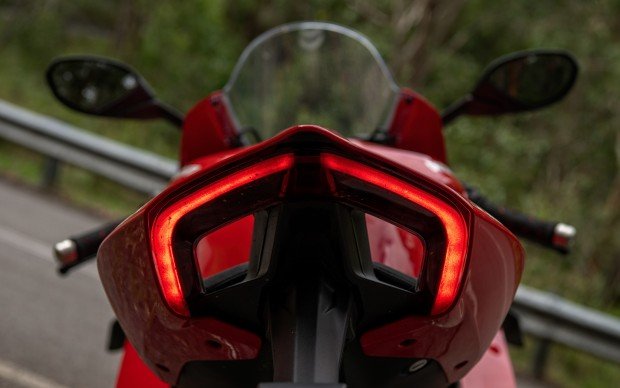 It’s one of those back-ends that start wars.

So what makes the Panigale S so special? Why did this bike, of all the bikes I have had the pleasure of riding, turn me into a mewling psychopath?

And it’s comfortable. I could ride it all day. Yes, it’s a race crouch, and yes, it’s a superbike in every sense of the word, but somehow, Bologna has made it ergonomically viable for the road. There was actually very little weight on my hands, and my body still works well enough for the Panigale’s peg-seat-’bars relationship to be very doable for me.

That kinda gobsmacked me a bit. I rode Yamaha’s insanely able R1 around for a month and it brutalised me like a farmer catching an ox in the cabbages. The Panigale is, relatively speaking, a very comfortable race-bike. 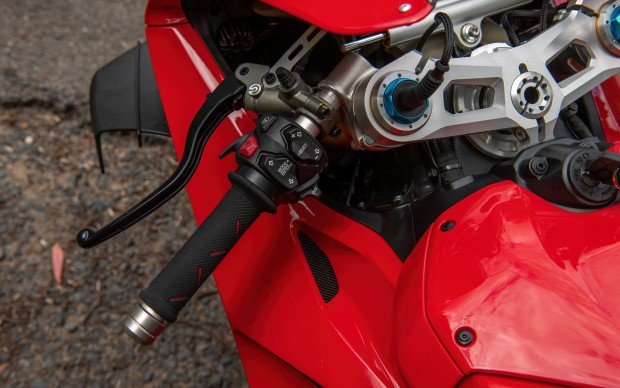 The God button is on the left-hand clip-on. It does God things.

Yes, OK. It gives off heat like an overloaded stove. That 1103cc V4 Stradale engine is a vast lump of exotic metals – with an insanely convoluted exhaust-system hanging off it. It radiates significant levels of heat – and glomping around in traffic is nigh-on unbearable. But even at 160-180, it’s searing your delicate thigh-meat – but by this stage you’ve gone mad and don’t care.

I stopped caring about the heat thing after Day Two. Sure, there were times when I actually thought my right foot was on fire and my left thigh was a weeping burn-blister. But I didn’t care. I was able to compartmentalise this by going faster. Adrenaline and all that, you understand.

That is the price you must pay to ride one of the most amazing bikes ever made on this earth. Yes, it is THAT good. I’m not. And you’re not. But it is. It so, so, so is. And because it is not as ergonomically compromised as other superbikes, you will find it so easy to suddenly ride in a fashion and with a level of elan and grace you’d have imagined just not possible. 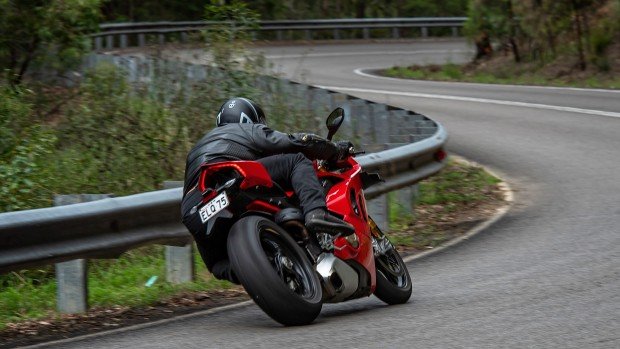 You’re not going to find the Panigale’s limits. I’m not even sure it has any as far as mere mortals are concerned. It’s better than you at doing everything – and not just a little better. A lot better.

The way it deals with corners – all sorts, smooth, bumpy, terrifying – is sublime and effortless. Whenever I’d run out of confidence, it didn’t. But as the pace climbed, the more intense it all got, and the more focused and purposeful I got, and the better the Panigale responded.

And it’s legitimately, resoundingly, and brain-fryingly fast. But you’d never know that just toodling around in traffic or around town. I thought it would hunt, or burp, or something, at low droning speeds. Nope. All smoothness and manners. But turn that throttle in anger and you’ll suddenly see what anger really is – real, red-meat anger. 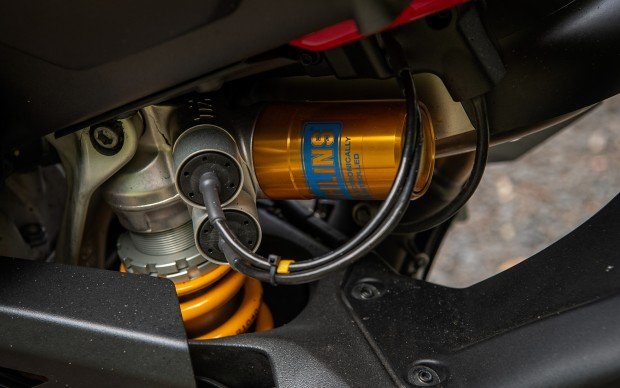 At 4000rpm it’s doing 120. It redlines at 17250. And no. I do not know how fast it goes. Faster than me, that’s for sure. I saw numbers consisting of a pair of twos and maybe a two and some threes – but then I stopped looking and caring and just rode. The Panigale is, by any measure, devastatingly fast and potent – and surprisingly much louder than I thought it would be. It actually sounds rather magnificent – and only a V4 could ever make a noise like that, or maybe a Tyrannosaurus fighting another Tyrannosaurus – despite the stock exhaust.

It is technologically sophisticated beyond compare. I’m not going to get into all its computers can do, but I’m sure a moon-landing is not beyond them. You can look it up, or go to the Ducati website for all the tech-stuff HERE. 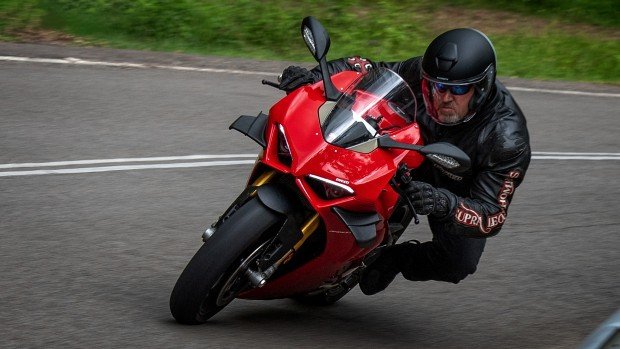 I fumbled around with the manifold modes and settings – and then, like 99 per cent of muppets, found a setting I liked and left it there. It’s up-and-down quickshifter is the best I’ve used, its horn is indifferent, its styling is sublimely aggressive (I did very much like the deeply recessed headlights rimmed by wickedly-pitched LED running lights), its petrol addiction is hardcore (maybe 200 out of a tank…maybe not), its headlights are OK if you’re not going fast, and its service intervals are 12,000 for a normal service and 24,000 for the one that’s gonna sting a bit. See my povo-comment below, but you can’t shop at this end of town and then bleat about cost. It is unseemly and crass. 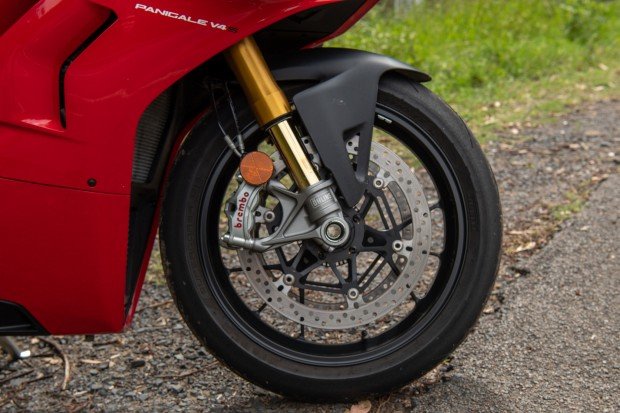 These would be ALL the brakes. Every last one of them.

And the Panigale is also wonderfully weird in that it runs higher tyre pressure in the front than it does in the back. A neat 36psi in the front circle of Pirelli Corsa liquorice, and 32psi in the back hoop. It’s to do mainly with the counter-rotating crank and how it’s action loads the front tyre up. Ask the sales-bloke about it. Watch him spin. 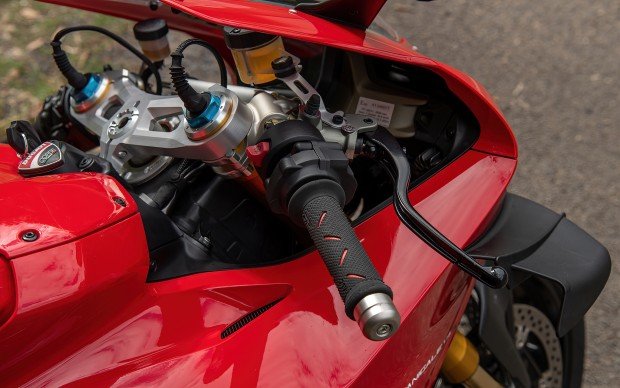 Ducati even puts red accents on the God tube. Bless.

But just because I think it is one of the finest, fastest, and most beautiful bikes on the planet, some villagers will immediately start to screech in protest at my view.

Let me just deal with that, shall I?

Silence, povo-worm. You just don’t want it bad enough because you haven’t yet ridden it. Get another job. Get another two jobs.

“It runs too hot! That has to be a design fault.”

You’re a design fault. The Panigale runs at exactly the right temperature to keep the soft, the unsure, the weak, and the feeble away from it. Go ride one. Get more leathery. In time, the heat will anneal your soft skin and make you stronger.

“It has no pillion seat or ability to carry luggage!”

Damn straight. It’s a Panigale. If it had a pillion seat and luggage, it would be a Multistrada. How did you get out of the Ulysses aged-care facility? You need more liver pills? Is that it?

“I think 214 horsepowers is just silly. No-one needs that.”

“Need” has nothing to do with “Want”, Karen. Your husband may need you to take the kids to school and do the laundry, but he wants that sassy, hot barmaid who pours him beers on payday. See the difference? 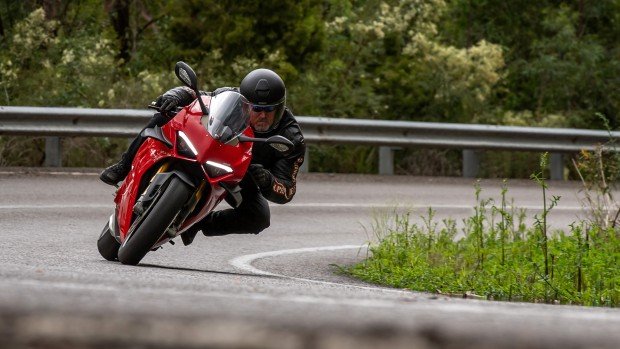 Getting my worm on.

I do not think the Panigale is a bike you own.

I think it owns you – heart and soul.

I am a worm…I am a serial killer.

And I am grateful to the Panigale for making me those things.