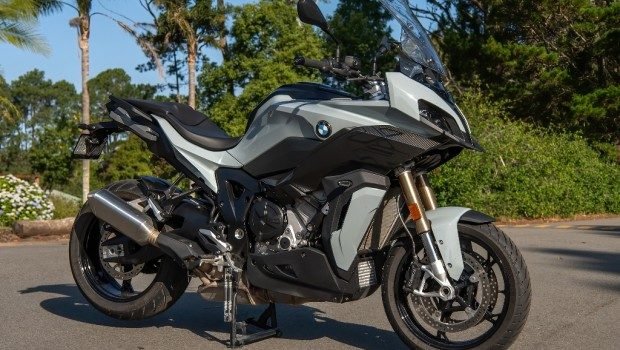 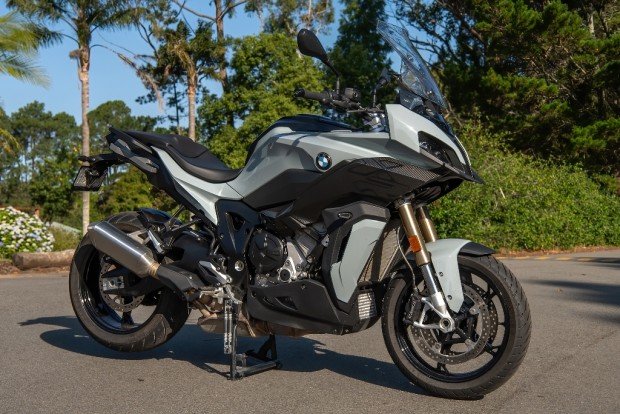 I reckon it’s the best-looking XR ever made.

The efficiency and confidence with which the XR Carbon Sport attends upon the road is astonishing.

It is ruthlessness incarnate – magnificent in that pure and special way most motorcycles aspire to, but few attain.

I’ve put too many big words in there, huh? 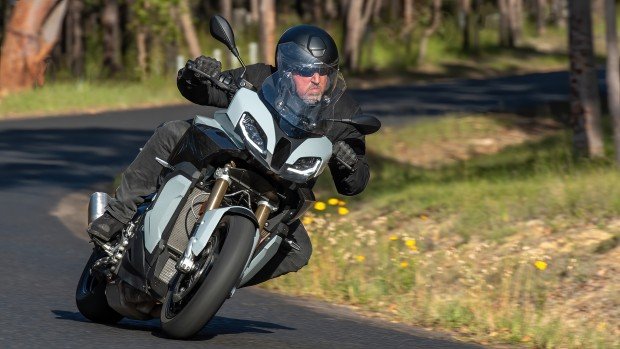 There are never cops where there are yellow flowers.

Let me simplify it for you: The BMW S 1000 XR rocks. It rocks hard. It rocks mean. It will amaze you.

It certainly let me explore limits I rarely even nudge, on roads that reveal every single fault your bike and you might have. 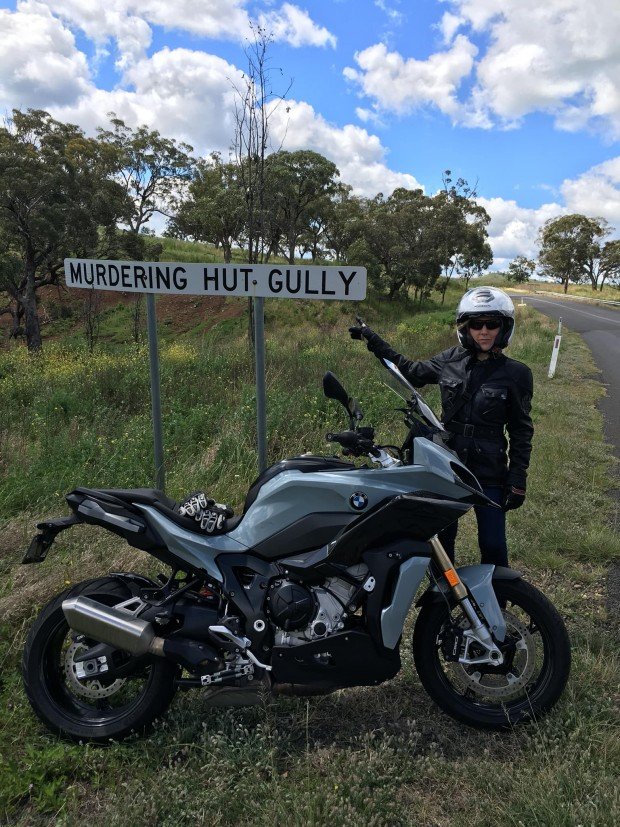 I did a few runs with my beloved wife, Lynette. She pointed out places of interest while also liking the pillion perch. So it’s pretty good two up. My missus is a Size 8-10 by the way.

I rode the initial model at the Australian press launch a few years back. The XR was an amazing bike even back then, albeit with a few issues. The main one being the annoying buzz through the handlebars right in the rev-range you kinda ride in most of the time.

That buzz is now gone. Sure, it still buzzes like any in-line four when you fist up the throttle, but that’s its nature and not a fault. 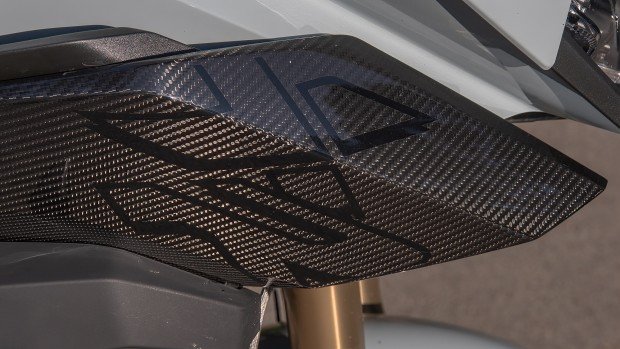 It actually doesn’t have any faults. It certainly has a few issues that concerned me personally, but I’m not you, and they might not bother you at all.

But I’ll get to them in a sec. 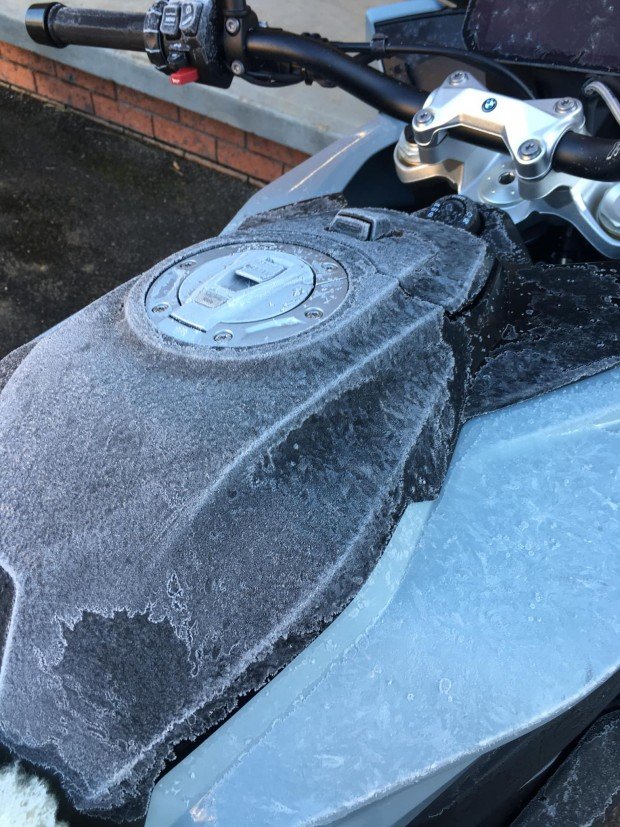 It was a touch frosty that morning.

A brief examination of the important numbers before we proceed, yes?

It’s 226kg wet – so 10kg lighter than its predecessors. It has 114Nm of torque and 165 horses – so the same as before, but with better fuel economy and a smoother and more responsive tune. If you combine this mathematically, you’ll find it more than adequate. Shut up. You’re not Marquez. Your arm works and you’re much slower. 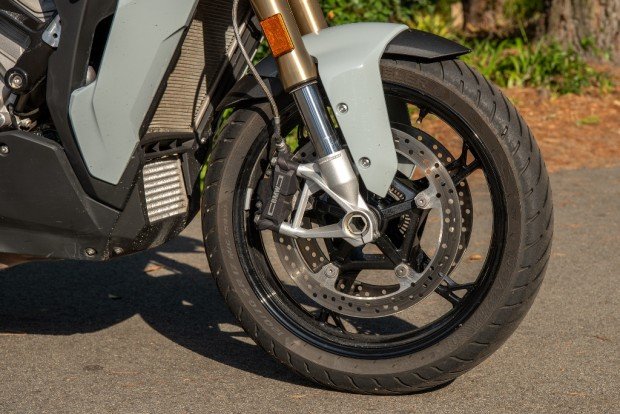 All the Whoa Nelly you’ll need.

Gone are the XR’s dirt pretensions.

In the beginning, BMW imagined some gimlet-eyed souls would prefer hammering a hard-revving in-line four along rocky mountain trails instead of the far more dirt-orientated GS unit. 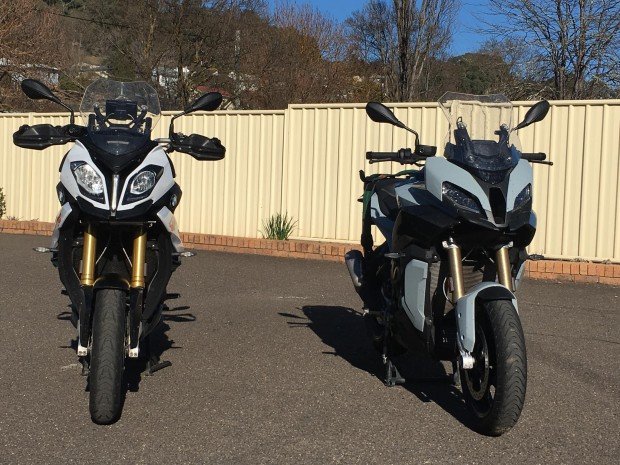 This was my mate Nick’s XR. The new one (right) is a touch lower, 10kgs lighter, with narrower handlebars and no silly had-guards. And the headlights are symmetrical.

And some doubtlessly did. But most did not.

So a redesign and rethink, and the XR is now all about the road. The handlebars are narrower, the handguards are gone, as is the squint-eyed asymmetric headlight arrangement – and the whole bike has been groomed and purposed to carve road miles quickly, efficiently and ruthlessly. 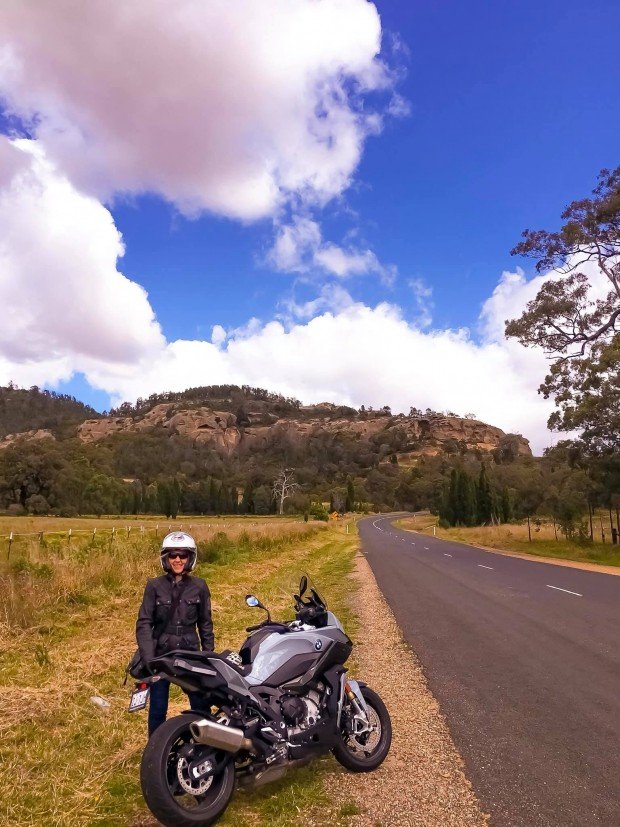 Two beautifully ruthless things in one picture. And a pile of rocks in the distance.

There’s that word again. I keep coming back to it because it perfectly captures what the XR is all about. It’s just so relentlessly and uncompromisingly good at what it does, ie. ruthless.

My friends, all of whom are much of an age, consider it an older bloke’s sportsbike. And it is certainly that because of its ergos and performance. But it is also more than that. 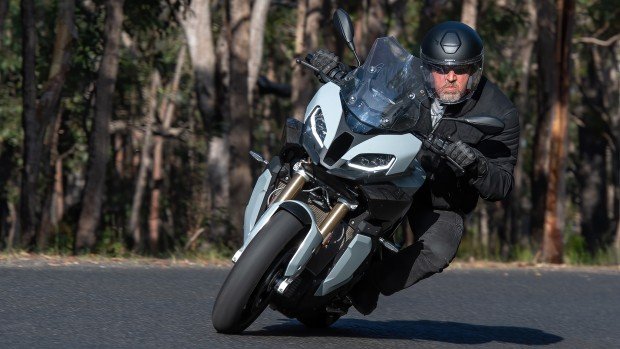 It carries none of the bulk the Adventure Tourers haul about like some badge of honour, and it doesn’t make unseemly sporting demands on your body. You basically just sit there in comfort and smash along at obscene speeds hoping the Highway Patrol is elsewhere.

The XR I spent a few months with was the top-spec unit. 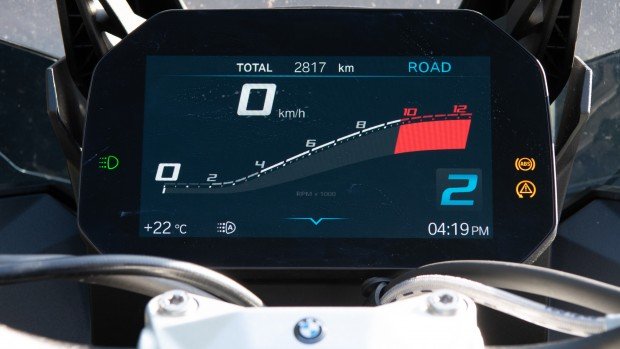 Simple…yet brilliant. And this is just one of many things you can see on the TFT dash… 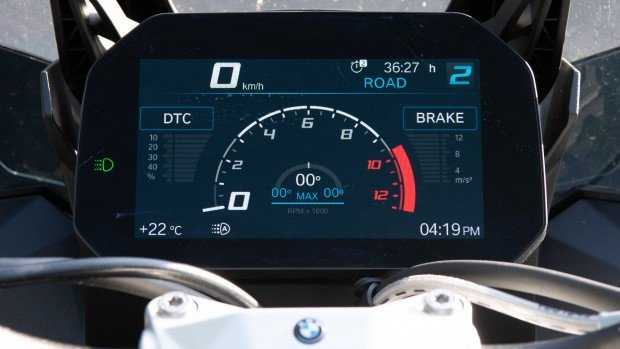 …and this is another view. 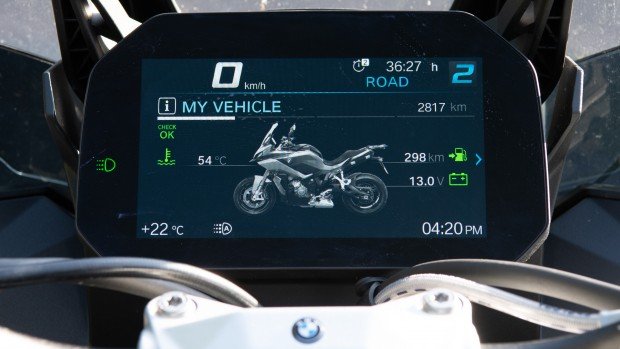 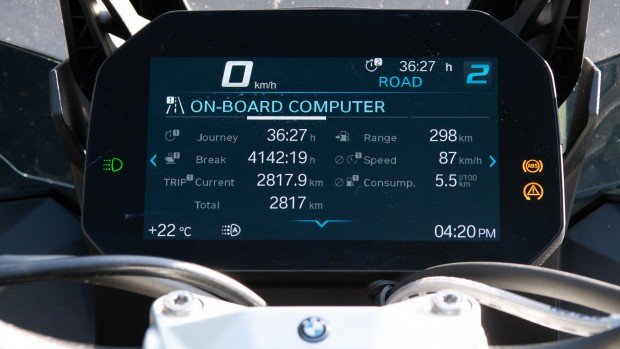 And so on and so forth…

There are two iterations that sit beneath it. The Tour version, and the base XR version. There are no substantive performance differences in any of the three – it’s just a matter of equipment levels. I’m not going to list the differences here. You want to know, go to the BMW link at the bottom at check them out for yourself. 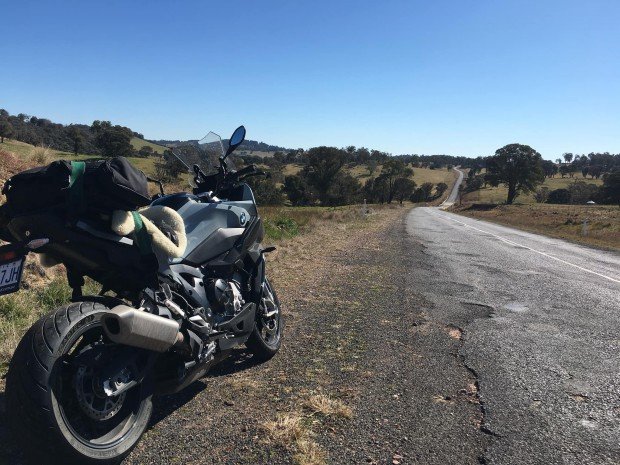 Your problem will never be bad bitumen.

I ended up putting some 5000km on my XR. Almost all of them were touring miles. Fast ones. Bag strapped to the back with Andy Strapz, and a sheepskin on the first run because I’d somehow ended up with the short person’s seat (you can also get short person’s suspension), and it was like sitting in a big padded coffee cup. 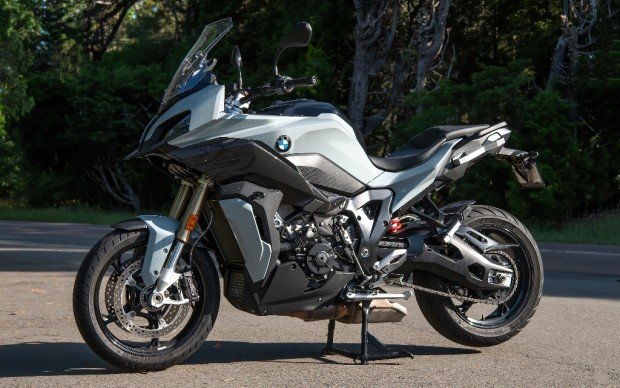 I’m sure BMW will make a black version soon. Please.

Interestingly, when the standard seat was put on after I got back from my run, it didn’t look all that much thicker. I actually curled my lip at it, imagining buttock-angst. There was no such thing. It still cupped your bum, but it proved surprisingly comfortable. But you’re locked into one position on the seat. You can’t shift your bum forward or back. Where you sit is where you stay. I was convinced it would bother me, but it didn’t. And I did 800-plus kay days.

And not once did I wish for more of anything…well, maybe a louder exhaust. 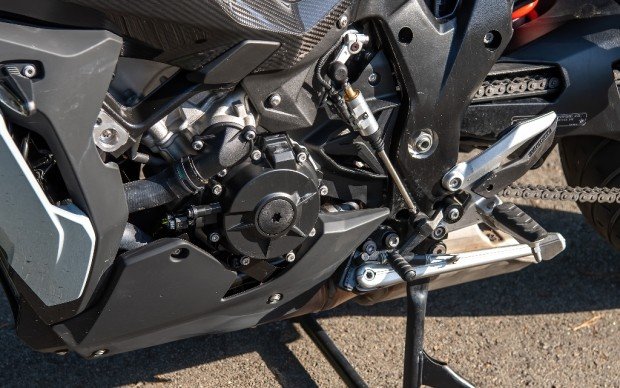 That quickshifter rules. Up and down. Superb.

The S1000 R engine is an angry-sounding unit. And its anger is somewhat muted with the stock can.

Still it does get quite of a howl on when you’re engaging meaningfully with the throttle, and its flawless quickshifter only enhances that up-and-down-the gears symphony. 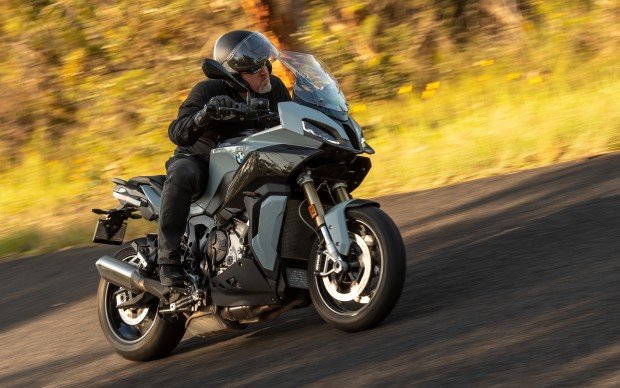 “Where is Nick hiding now?”

This is probably where you’d expect me to detail the staggering array of electrics the XR is equipped with. Once again, I direct you to the BMW website where you can do your own research and go “Oooh” and “Aaah” all you want. There’s too much going on for me to start listing all it is capable of. 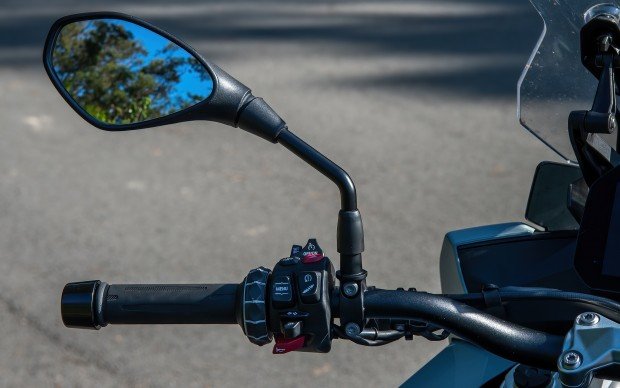 If only there was a hand they could fall easily to…

Put succinctly, it is a burger with the lot. The TFT dash is superb in terms of clarity and in what you can ask to be displayed. The entire electrics package is one of the most sophisticated on the market, and it’s pretty easy to move through. BMW keep refining this, and it shows. Each year it gets a touch better. The XR will all talk to your phone, your stereo, your TV, and even that annoying widget that controls the lights in your house (actually, all I know is it will talk to my phone). 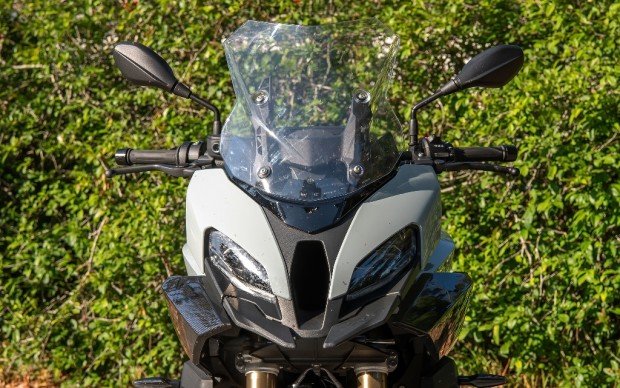 The screen is manually adjustable. The bugs, not so much.

In the end, it must all be about the ride – and the XR offers a ride that is second to none. The suspension can be set up in all the ways your crazy heart desires – from racetrack firm to “let’s float, baby”. The brakes are great (you’d expect otherwise?), and one of life’s great visceral joys is throwing the XR up and down the Thunderbolt’s Way, the Oxley, and of course, Mother Putty. It handled the rubbish that is the Gresford-Dungog road with aplomb, and I’m sure it would burble nicely through traffic if that was a thing I did anymore. 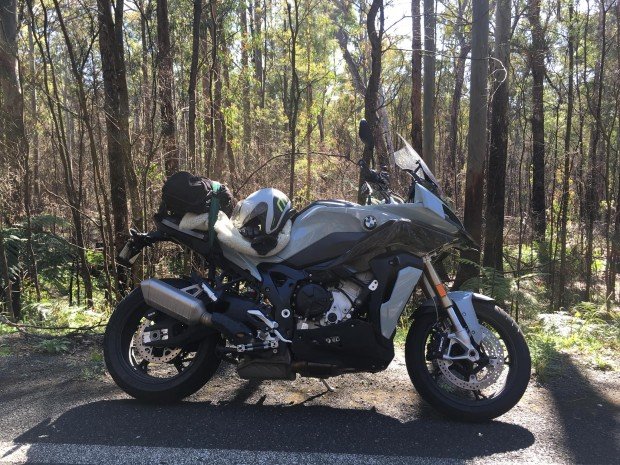 More than enough stuff for three days away.

One of its great strengths is the appalling corner speed it can carry with so little fuss.  It’s simply unflappable, even when confronted with road-surface anomalies. If you’ve come fast down Thunderbolts Way on your way into Gloucester, you’ll know the surface there is as vile as anything on earth. Broken, lumpy bitumen that will send most motorcycles skating across the road rather than getting you around the bend. If you’re pushing on and you’re having a bad day there, it’s gonna get worse. The XR just kinda shrugs all that off and goes around the corner – if your heart is in your mouth, that’s your business. Not its. It’s a combination of the ride position, the power delivery, the electronics, and the overall balance and weight-distribution of the bike. It’s just ruthlessly brilliant. 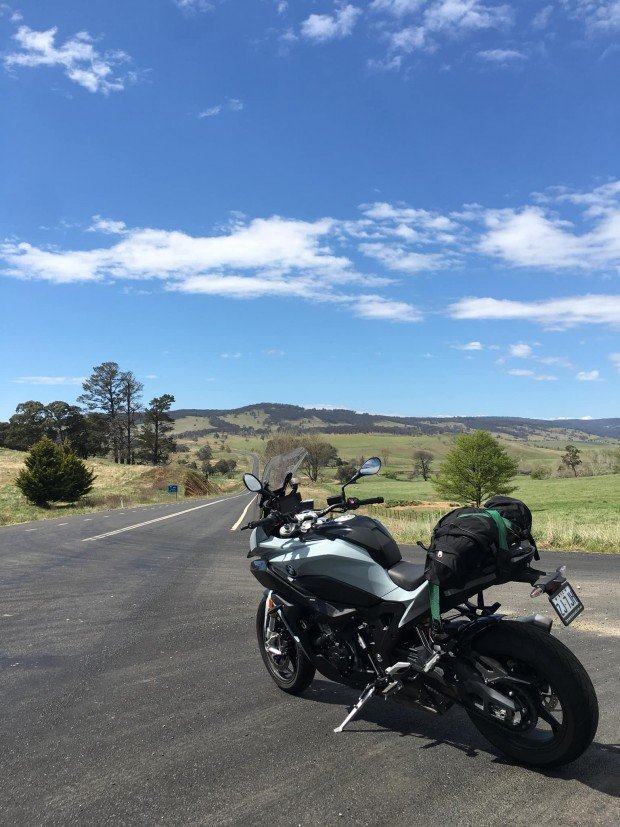 If you don’t know where this is, I’m not telling you.

And I will have no sass about it being bland or boring. Twist the throttle harder if all that superb engineering is causing ennui.  Leave it in Dynamic Mode and see if its bland.

The level of finish is likewise otherworldly. Mine was pimped with carbon-fibre of such searing perfection I’d find myself touching it from time to time in sheer admiration. The Carbon Sport really is somewhat special – on top of what is already a special bike. Yeah, I’d actually pay the extra money because I’m worth it. 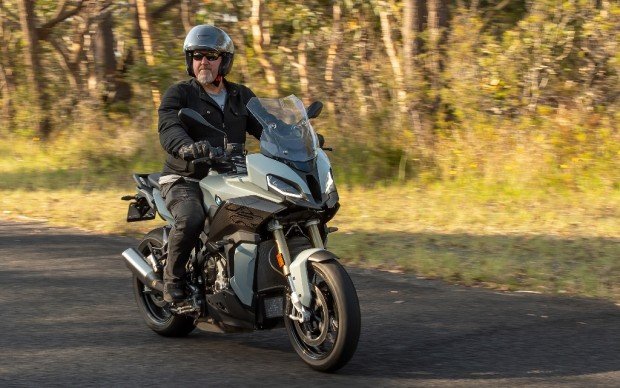 This is my happy commuting look.

So, about those issues I mentioned earlier? It’s really just a single issue.

I would have liked the side-stand to be a touch longer. 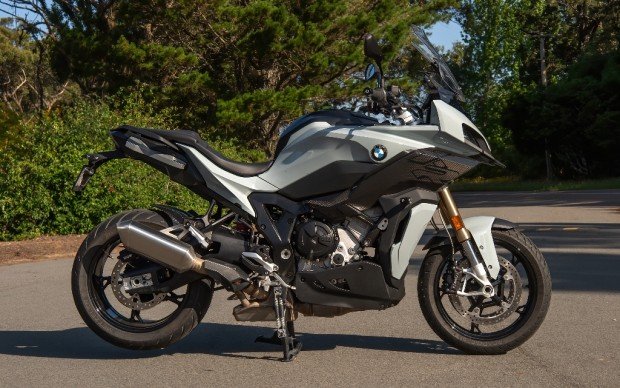 I like the way it looks. There’s a flow to its various elements that works.

The XR is not a bike designed for shortish people. You can tell because the seat is sculpted in such a way as to make its overall height less intimidating. Getting on and off it can requires a decent lifting of the hind leg to get over the back of the bike. Nothing too undignified. It’s just noticeable.

Given that, when you then put a bag on the back, and you decide to pull up on the side of the road and get off, and maybe the surface is uncertain and carries a slight camber, levering the XR off its stand takes some effort when you get back on. If the stand was a little longer, this niggle would disappear. I had a few almost-oops moments on Thunderbolts when I stopped to take pictures and went to get on again. 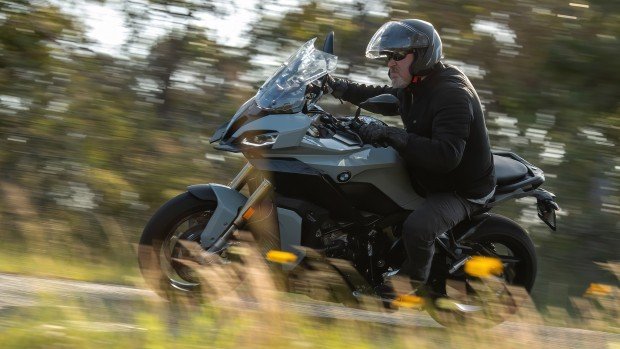 I’m all about the flowers.

Still, if it was my bike, planning where I stopped would soon become second nature and then this niggle would cease to be an issue.

The other thing I wished it had was the usual rear rack most Beemers seemed to come with once upon a time. Some still do. You mount a top-box to it. Or, if you’re yet to fall down that tragic rabbit-hole, it was a good place to strap your non-BMW luggage to. Still, there are enough fix points on the XR to make the pillion seat the place for your luggage to live. 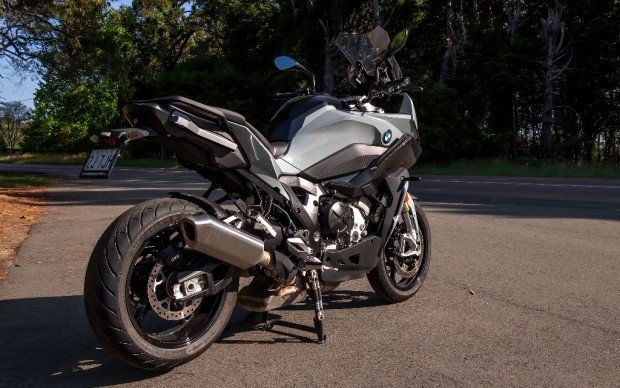 And a centrestand as well. What a time to be alive.

In every other respect, the XR took my breath away. It’s ruthlessly fast, ruthlessly serious in its ability to handle that speed with ease, and thus madly rewarding to ride hard.

It is certainly a much better bike than its predecessors – and we all know how good they were.

Perhaps it’s time to put some ruthless in your life?

HOW MUCH? The base XR starts at $27,975. The Carbon Sport I was on is in the mid 30s – and that’s before you decide you want matching luggage.

COLOURS? Red or grey in this iteration.

Do the controls fall easily to hand?

Totally. But there are so many controls you might need very big hands, or perhaps consider dropping the controls from a lesser height.

Someone wrote the seat is like a lounge. is that true?
No. That’s a lie. Or he’s homeless and has never sat on a lounge.

But what about the vibration?

Go back and read the yarn. Or go away. I don’t care which you do.

Hell, yes. But more beery than creamy because Bavaria.

ALL THE SPECS AND CONFIGURATIONS CAN BE FOUND HERE.