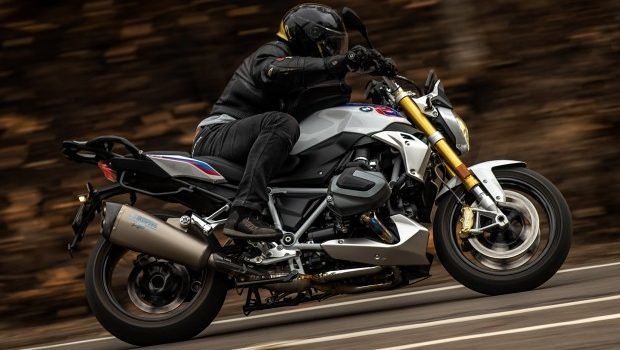 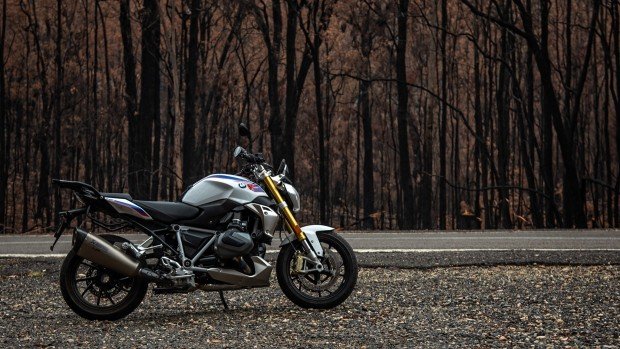 This is how long I have been riding the R1250R HP. The bushfires were still burning.

The R1250R HP is a stunning motorcycle.

There. I said it.

It is, hands down, the best boxer-engined bike to come out of Bavaria thus far. And coincidentally, it’s also one of the best all-round motorcycles you can buy.

I say this because I have been riding this one for the last few months and have put more time and more miles on it than I ever imagined I would. 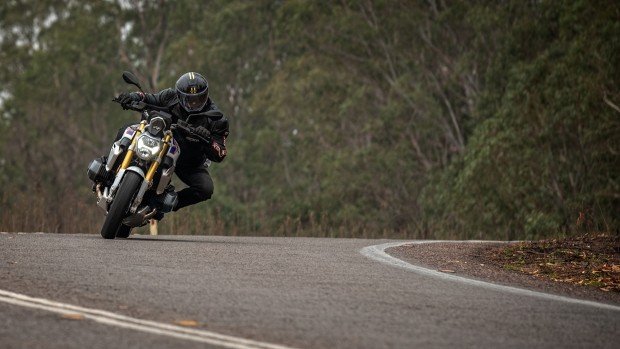 I hope all the kangaroos have been burned.

I have toured on it. I have scratched on it. I have raced bearded wildmen on overpowered Multistradas along winding mountain roads, and been pursued by certifiable lunatics on evil Rocket 3s. I have ridden it in rain so hard and cruel it took my breath away, and I have belted it along the Bin-Chicken Proving Straight, throttle to the stop, praying to a non-verifiable God the ice-freaks wouldn’t that second decide to come surging out of their caravan park. 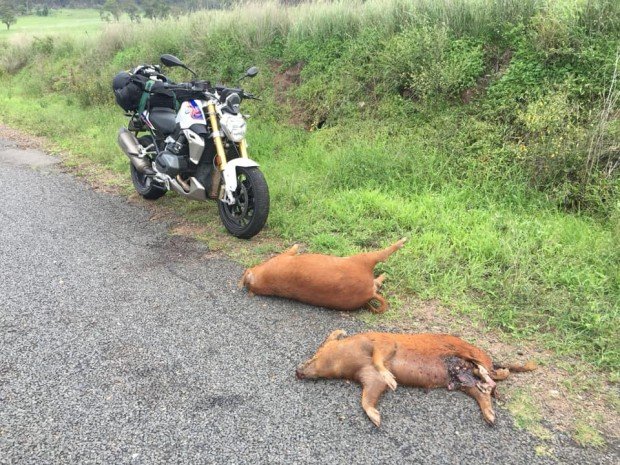 I found these red-headed step-children on my travels. Pic by me.

I have so ridden it.

And it has amazed me and delighted me every single time. 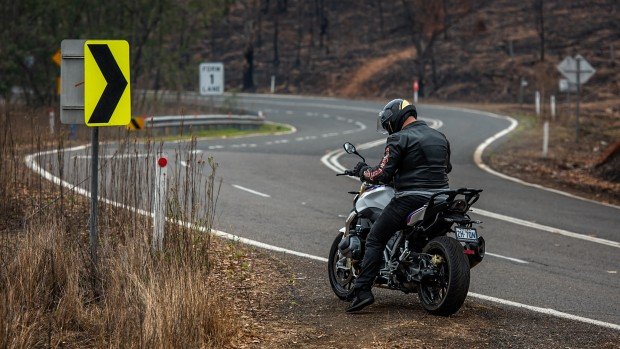 How does a boxer-engine bang so righteously?

What sorcery is this?

Take it as a given that it handles wonderfully, and stops brilliantly, and it’s comfy and fancy, and sophisticated – and for the first time it actually looks all broad-shouldered and brutal in its special German way.

But it’s a boxer. And they just don’t really bang, do they? Everyone knows that, right? 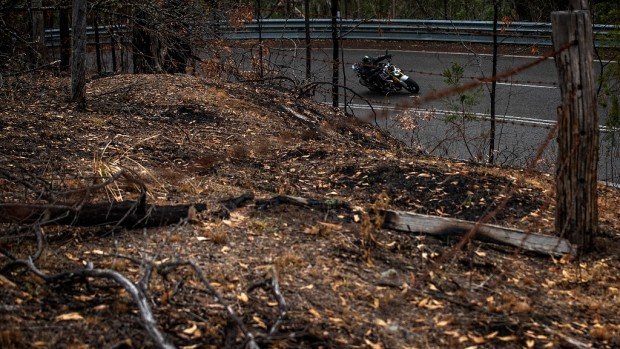 Nick smelled smokey when he came off the hill.

And then there’s that weird thing about it not really being a BMW unless it’s got that boxer engine in it. That’s what all the hairy-faced boxer-faithful will tell you if you stand near a campfire long enough. And they have a point. That horizontally-opposed twin is…well, it’s BMW incarnate.

So what is going here, Goddamnit? 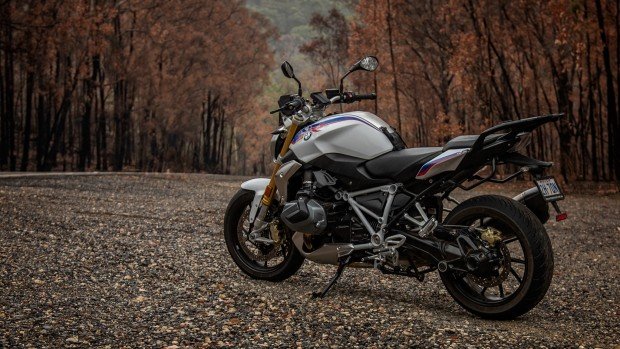 That sculpted tank is actually quite beautifully formed.

And while this seemingly archaic engine configuration looks like it has no business powering anything in this space-age we live in, Bavaria begs to differ.

The Bavarians have decided the boxer shall be like this now, all-banging and wondrous, and that’s all there is to it. 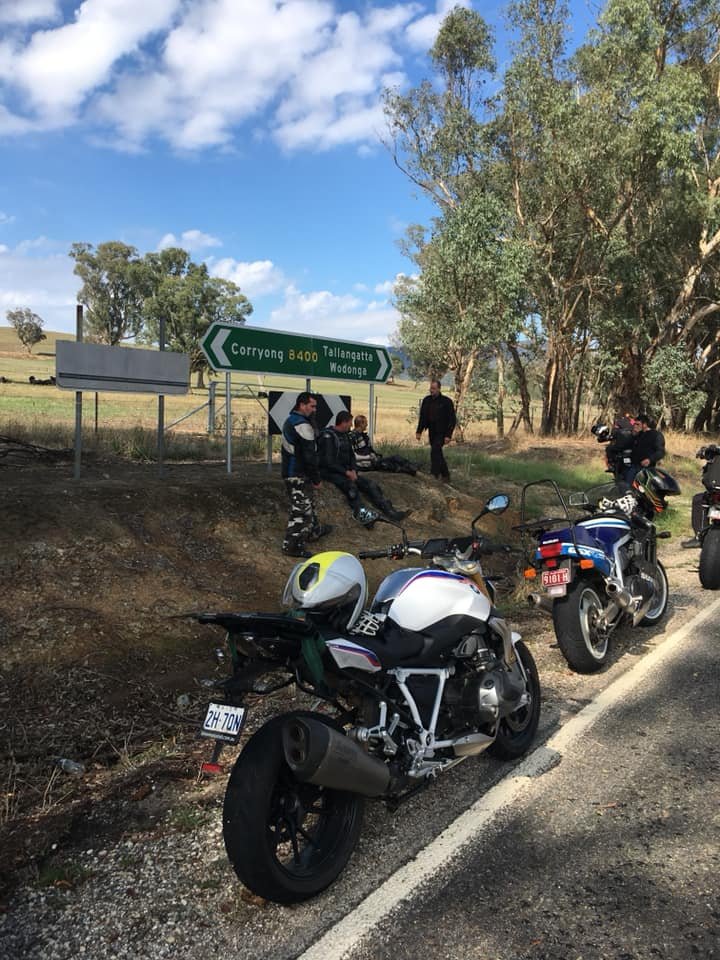 Vast sections of the Motor Traffic Act were held in contempt on this trip. Pic by me, as if you didn’t know.

The Germans have form in this area.

I understand Porsche cars should not work as well as they do because the engine is in the wrong place and the weight is all wrong, and if you don’t know what you’re doing, a Porsche will kill you like a dog. And that was true. Once upon a time. 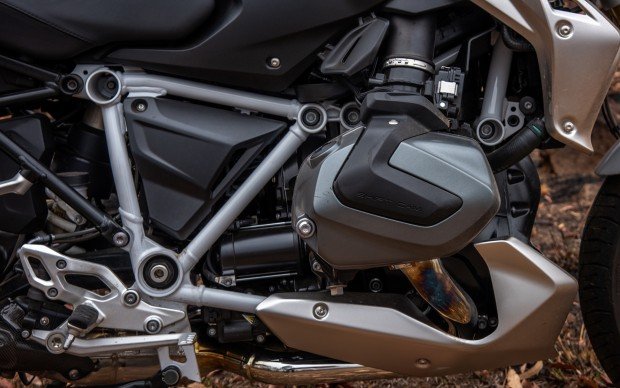 Where the funky business lives.

But the Germans kept pouring technology into the Porsche until it worked better than a Ferrari, while still retaining its unique “Porscheness”.

This is what has happened with BMW’s boxer-engined models.

BMW decided its legendary engine must continue, must be better than ever, and must finally be able to bang rather hard, and issued a memo to that effect. 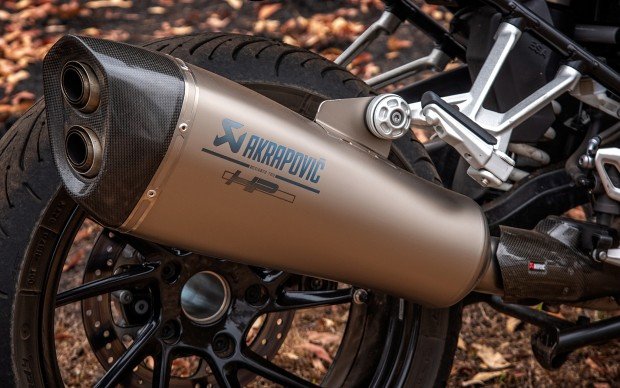 Custom-made for the HP, it could be louder. Shut up, Highway Patrol! You’re not the boss of me!

So the engineers just kept developing that engine, and engineering it, and maybe promising it big chunks of strudel, and in 2020, they have caused the finest Boxer engine ever made to be…um, made.

In doing so, they have not only created the best boxer-engined BMW ever, but as I observed earlier, they have also made one of the best all-round, do-it-all-and-do-it-great bikes you can buy. A technologically sophisticated blaster and delightful commuter, that’s comfortable, seriously fast, and with great touring credentials, both solo and two-up.

It really is that good. 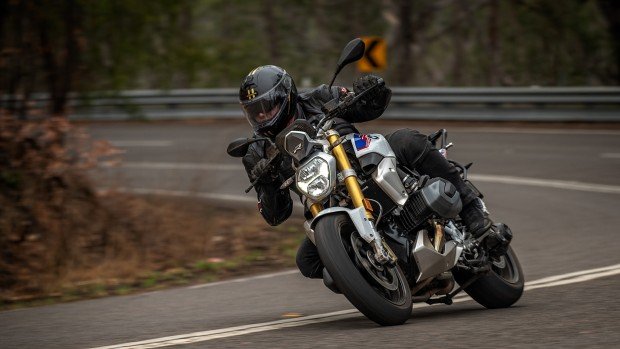 Weekdays are the best days on Mother Putty.

What the big difference is, apart from the capacity, and what makes its impressive 136 horsies (At 7750rpm) and 143Nm (at 6250) work so religiously throughout the entire rev-range is the shift-cam thingy, or Variable Valve Timing (VVT) – a first on a BMW bike.

BMW’s take on VVT is a bit different. It uses a servo motor to move the actual camshaft, which has two lobes per valve, to where it needs to be depending on what demands you’re placing on it. The engine “understands” those inputs and adjusts the cam timing accordingly. 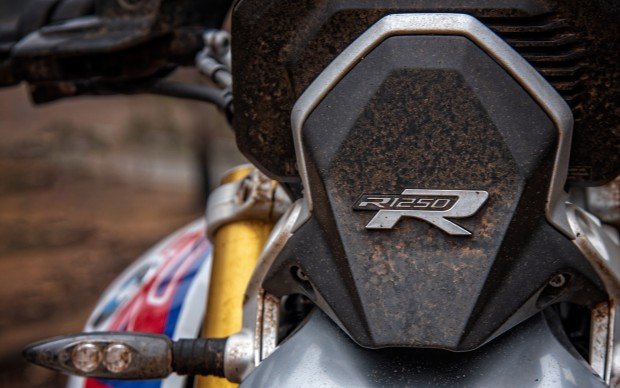 The red dust of dignity.

And no, you cannot feel this happening. Like when you fall in love. You can’t feel that happening until it’s happened. This is the same. Except this is about torque and that is more important than love.

You can watch this nice video with the dramatic music if it will help you understand.

What this means on the road is what is important. Suddenly, here is a boxer that comes very hard off the bottom-end. Like, seriously hard. And then, while surging meaningfully through the mid-range, does not run out of puff as you near the 9000rpm redline. By this stage you are looking at numbers beginning with two and hoping the Highway Patrol will shoot you on the side of the road rather than haul you before a magistrate with your chains a-clanking.

Yes, this is the new boxer engine from BMW. 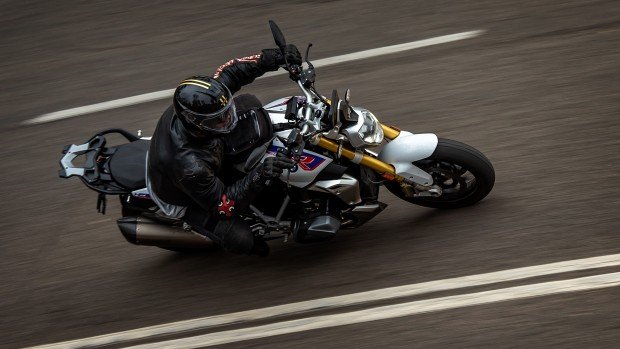 I love it when Nick climbs into trees.

But there’s a whole heap of other stuff on the R1250R that nudge it into the brilliant section of the schoolyard.

The electronic suspension is next level. You press a button, on the fly if you like, and it re-jigs itself for more comfort, more race, more ‘Mum’s eaten too many pies’, more whatever you want. Or less, if that’s your thing. 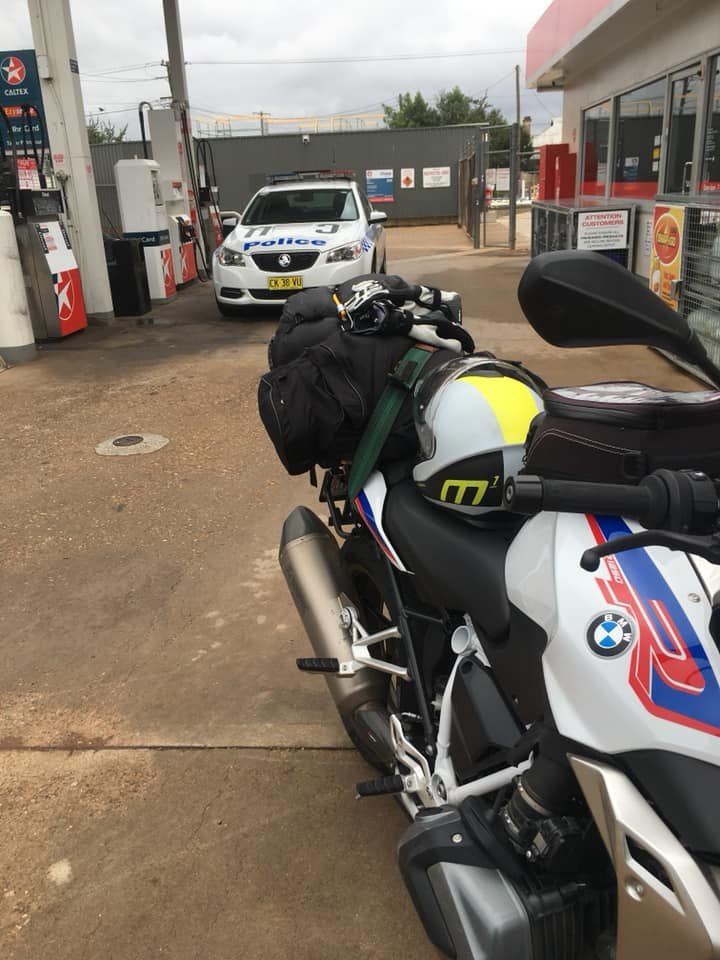 But the electronics then climb to yet another level altogether with the full-colour TFT dash, and the Blue-Fang-loving super-computer that drives it.

Firstly, and crucially, the 6.5-inch dash is positioned exactly where it must be in your eyeline. You just need to flick your eyes down for a sec to see how long you’re going to jail for. There is no need to drop your head, or peer with watery eyes at wee little numbers and symbols whose meaning may be obscure. It’s all there in big, bold, easy-to-read, graphics. If this is not the easiest-to-read dash on the market, I do not know what is. 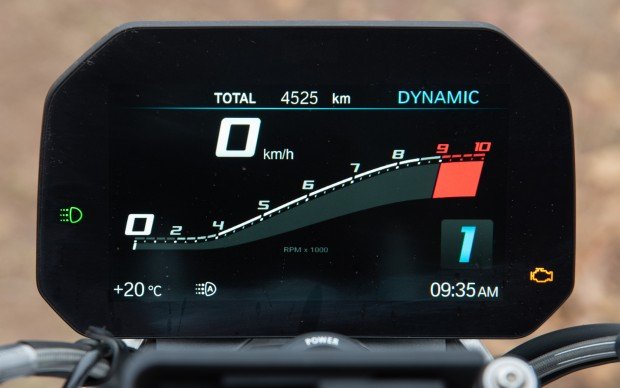 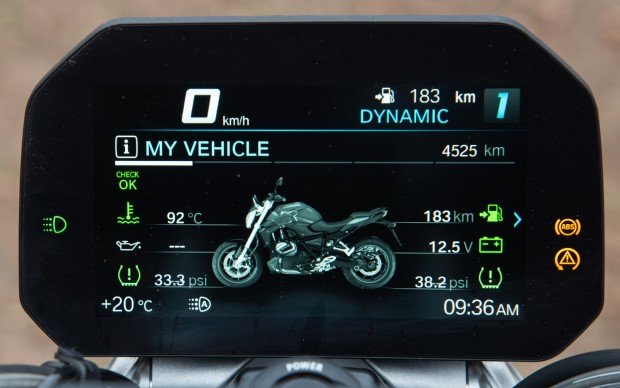 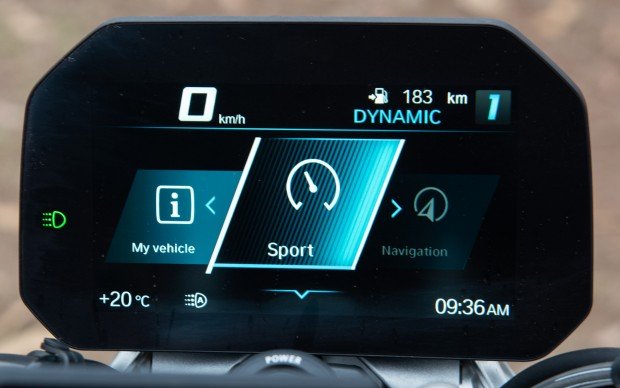 There is much to explore here.

But there are levels and levels of stuff in this dash – and there’s also turn-by-turn navigation, a genius app that goes with it, and the ability to pipe Megadeth’s ‘Wake Up Dead’ into your brain (via any Blue Tooth speakers you may have fitted inside your lid) while it’s still directing you to the nearest motel, and recording your lean-angles and braking force for late-night boasting.
It also tells you if you need air in your tyres, and that you could lose a little weight and maybe get a haircut. 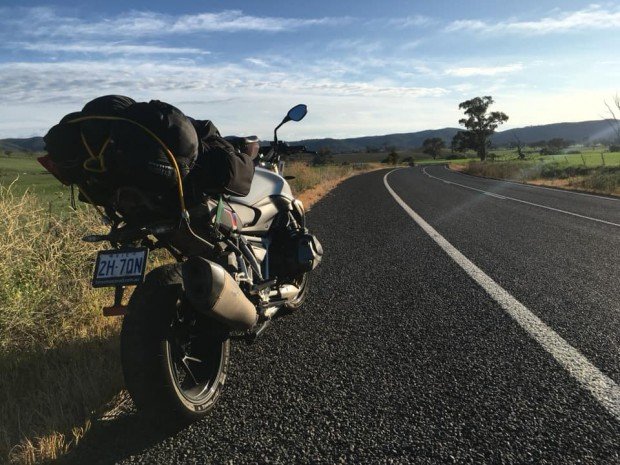 If you didn’t wanna spend the dollars on the BMW luggage, there are all the tie-down points in the world available. Makes you look a bit more edgy too.

Do I need all this? No. Am I cool with it being there? Absolutely. Why would I not be?

But wait. There is more. The R1250R is a model which comes in various incarnations. Many of which you should immediately agree to in the showroom. The one I had, the R1250R HP, came with everything I could ever want on a bike – and a three-year worldwide warranty. 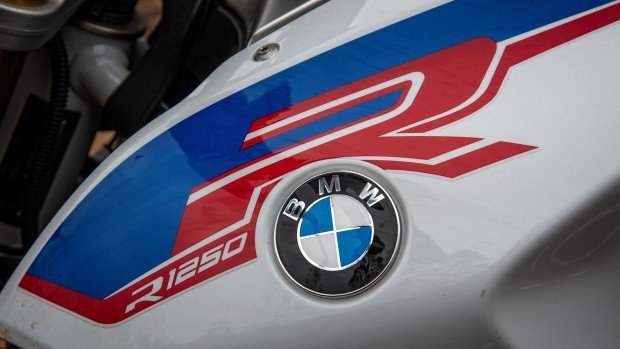 I call it the “Serbian flag” colour variant.

Follow this link HERE and you can check out the variants for yourself.

There is, of course a vast list of accessories you can get, which will turn it into a killer touring bike, and/or a fancy showpiece if you go down the Option 719 path. I’ll be honest, I do like the gold-etched rocker covers. 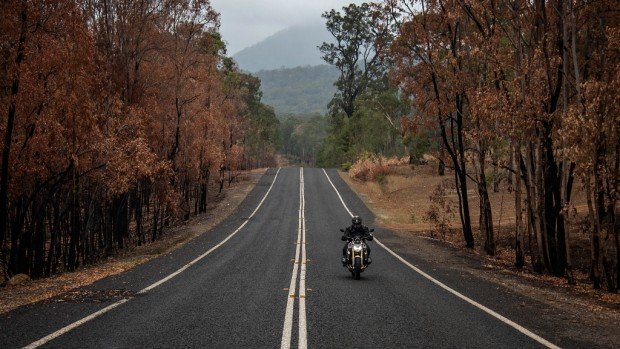 The road goes on forever.

It ain’t light on paper (240kg), but on the road it feels like a 200kg bike thanks to its very low centre of gravity. Smash it through a series of corners and you’ll see what I mean. It really is hugely rewarding to scratch on. And thanks to the way it delivers its power, belting along in the pouring rain inspires confidence. 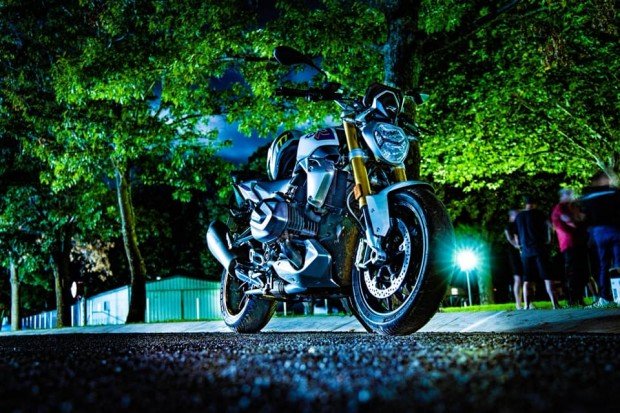 Dino Dess from Vanguard Motorcycle Club took this. I was busy drinking.

I cannot fault the R1250. I tried. I really did. I rode the hell out of it, and even fried a rear tyre in my efforts, and the only issue I could come up with is the Akro can is not as loud as I might want it to be. Yet it still pops on over-run and sounds meaty when your smashing it through the quickshifter. 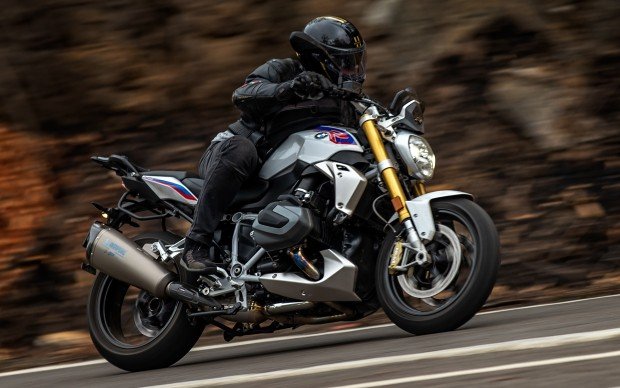 It’s one of the best things I have ever ridden.

Even the horn is screamingly loud.

What do you want me to tell you? This is it. The best boxer ever made.