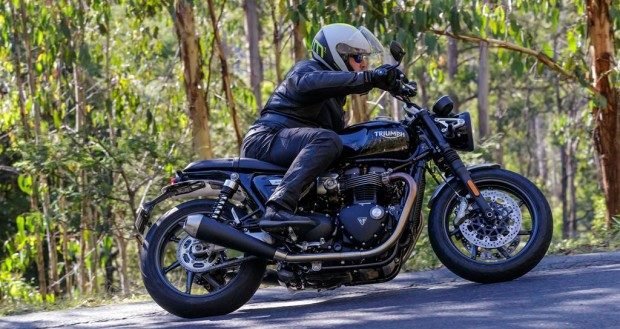 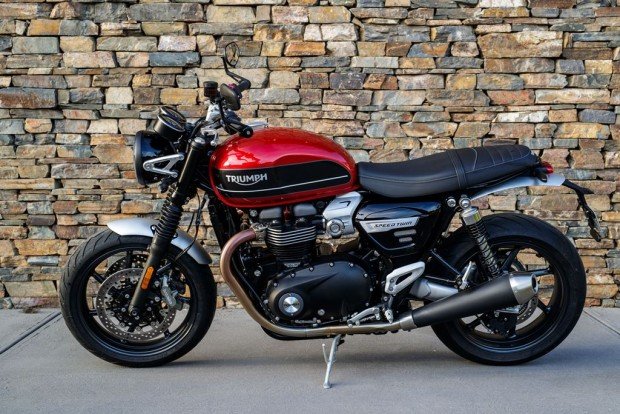 It really is a vision splendid.

To my mind, a motorcycle has to be lovely to look at before I would consider showering the salesman with dollars. It doesn’t matter to me what others think about my purchase. Just so long as I think it’s beautiful.

That’s the key. That is the deal-maker.

Motorcycle manufacturers get this.

Well, most of them.

Some of them will never get this and will rely instead on high-tech gadgetry, performance, and impressive spec sheets to sell their wares – presumably to soulless robots who buy bikes to commute on, or because they are…shudder…economical. 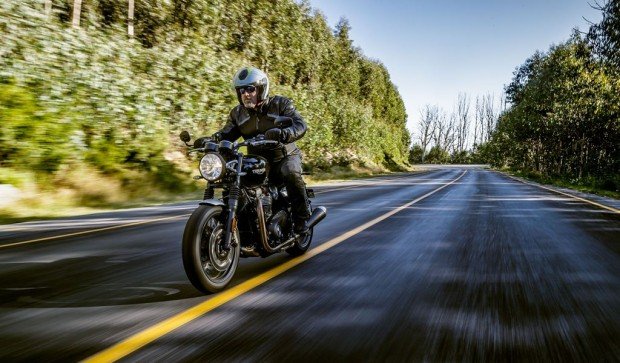 I don’t breathe that air.

And from what I have seen, I’m sure the blokes cobbling together Triumphs under the benevolent lash of John Bloor, don’t breathe it either.

Objectively and subjectively. Its lines are right. Its stance is righteous. And it cleverly occupies that rare aesthetic with one foot in the classic past and one foot in the sophisticated present. 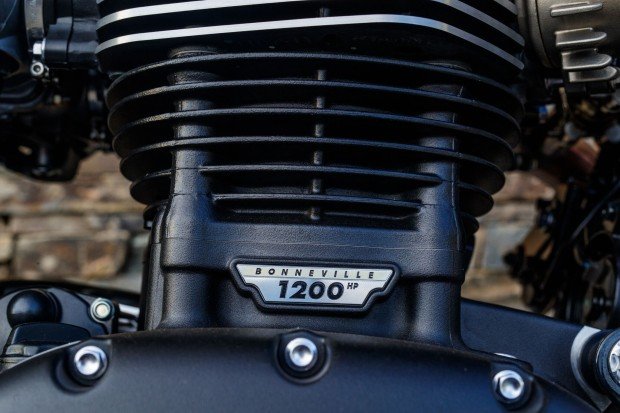 If it went like a battered lawnmower, I’d still think it beautiful.

It steps out rather lively, actually. Two days of squiring it around some of Victoria’s Not-So-High country at the recent press launch put the proof to that. 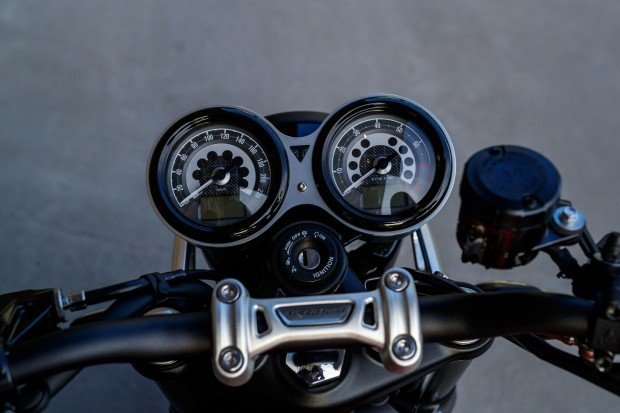 Very stylish. Kinda far away from where you need to be looking, but just don’t look at them all that much. 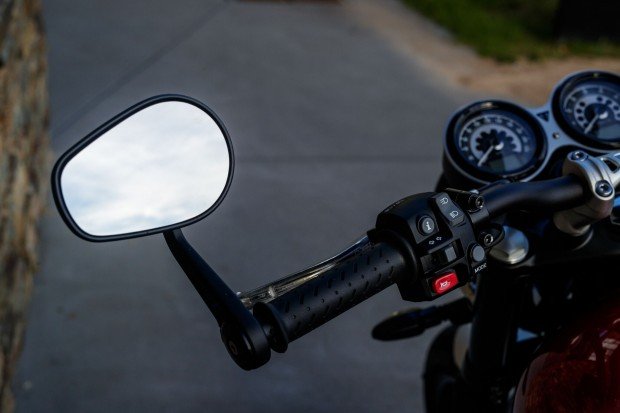 Best bar-ends ever. Vibe-free and you can actually see stuff behind you.

This is a bike that is lighter (196kg dry) and more powerful than the vaunted Thruxton. It has a lighter crankshaft and a higher compression ratio, but uses the same High Output tune as the Thruxton. Which means the numbers are 97 horses and 112Nm (at 4950rpm – or 100Nm at 2000rpm) – with a torque curve flatter than a runway, and a power delivery that will nudge you into diabetes with its sweetness.

It attains this weight advantage over the Thruxton via an engine that is 2.5kg lighter, and boasts magnesium cam covers, a revised clutch assembly, and lighter wheels. 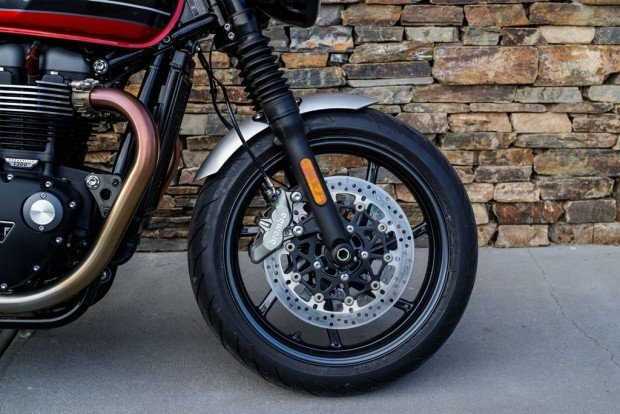 Brakes are good, but spokes would have been great. Still, the front guard makes up a bit for that oversight.

It is an enticing package to ride, and with its drop-dead good-looks, there could well be clouds of sweetly-scented girls’ undergarments greeting the owner on his travels.

But should you want to impress the ladies with your derring-do riding capers, you will find the Speed Twin somewhat staider in its response than the Thruxton. 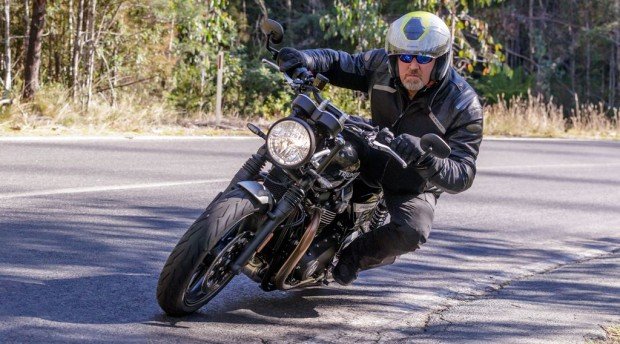 Some of my offices are really nice.

It has a 15mm longer wheelbase and a less cruel steering angle. This makes it more stable on the road, though less lively in the bends. But given its shod with serious Pirelli Rosso Corsa Threes, it’s not going to bring shame upon your ancestors. That will be your doing entirely.

The forks are 41mm with 120mm of travel and the rear KYB units are adjustable for preload. I would be up-speccing the rear units to the readily available Öhlins aftermarket items, because when you decide to wring its neck (and it wants you to…it really does), the suspension doesn’t always deal with our rubbish roads as well as it might. Or maybe my spine doesn’t bounce as well as it once did. 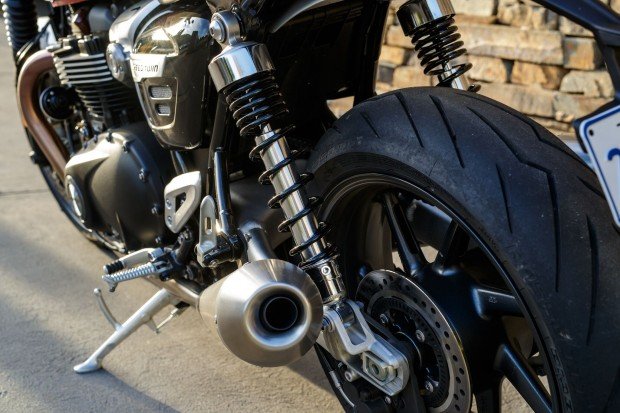 The shocks are keen, the note is sweet. Both can be vastly improved by owners with beer.

It is not assisted in this regard by the very sexy, slim-line seat. There is a touch of cruelty in those skinny seats.

Look, if you’re just riding like a Christian, as so many prospective owners will, then you’ll be delighted. Decide you want to explore the outer reaches of the Motor Traffic Act, and you’ll certainly find the limits of the suspension and the seat. 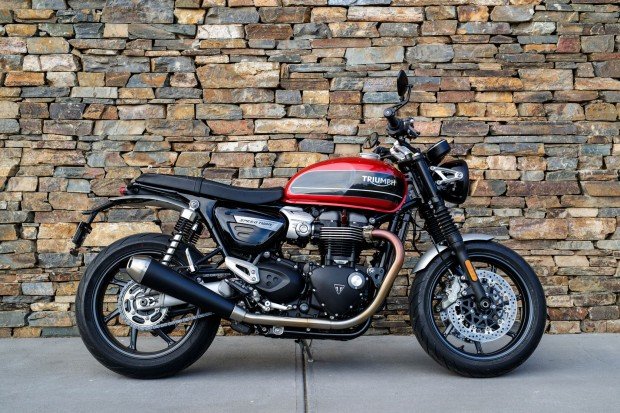 The seat is lovely. But a little cruel. But lovely.

This is not necessarily a bad thing. It teaches you manners, I guess.

And I’d never change the seat. Just like I’d never demand a supermodel pack on some beef so her hip-bones would stop bruising me. It’s also quite a low seat height (807mm), so that will delight the more squat-legged among us.

Triumph has not relented in its pursuit of quality finishes. It wants its bikes to look and feel like proper fancy, high-class units, and to a large degree, it’s quite successful in this regard. The Speed Twin has a plethora of classy touches – brushed aluminium guard, LED daytime running light, lovely gauges, a USB charging socket, great Brembo brakes, the best bar-end mirrors in the world, and a snazzy fuel cap you can play with like a Zippo lighter. 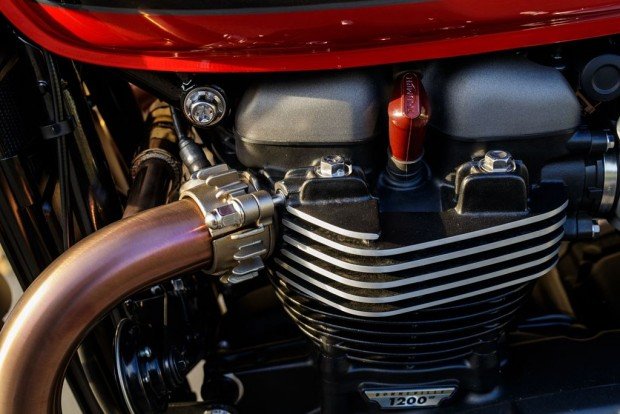 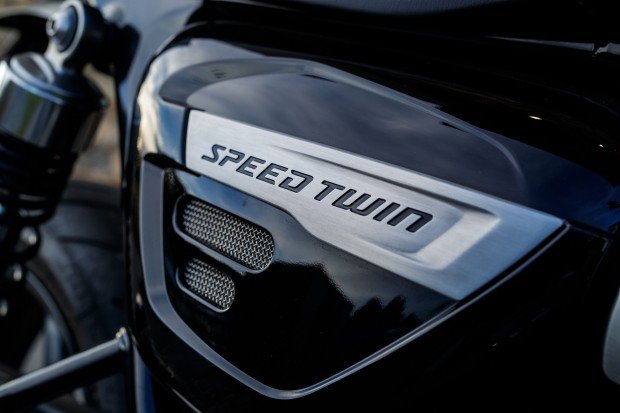 The name is legendary.

The Speed twin also has three engine modes, and if you keep it in Sport, you’ll be happier than you might be in Road or Rain. There is a difference, but the nature of the engine means you won’t be screeching in terror in Sport. It just delivers the oomph with a little more eagerness. Road is fine, but if’n you’re gonna worship Satan, Sport is the go.

The torque-assisted clutch is sweet, and the gearbox changes with delicious precision (Triumph really must be congratulated on its slick gearboxes of late), which all goes to the Speed Twins ineffable rideability.

I guess what that means is it’s a very easy bike to ride and just as easy a bike to ride with a little salt in your belly.

Thrills without the terror, I guess. 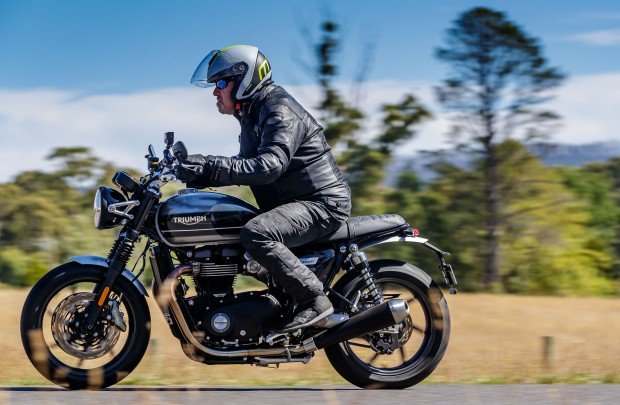 It’s roomy enough and the ergos suit the bike to a T.

But most importantly, it satisfies – emotionally and on a crucially visceral level, which is all ultimately down to its looks.

And they are simply divine. It’s very much a drink-beer-and-stare-at-it bike.

Its whole aggro, forward-canted stance, its fat pipes, its bushed alloy, its toxically masculine colour options (jet black, grey on silver, or red on grey), and it’s classically correct lines, all combine to offer a truly desirable motorcycle – and there can never be enough of those.