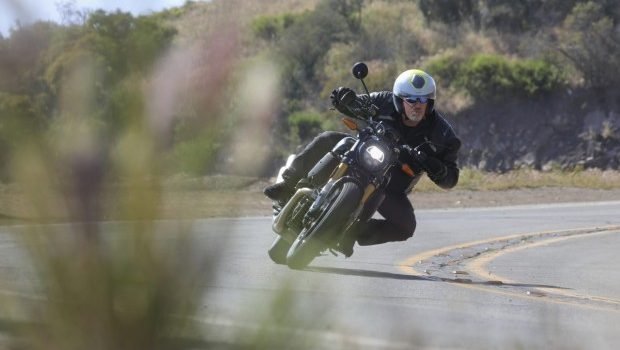 Sure, it ain’t the searingly brutal 750 flat-track racer – but it’s still got some spikey old-man hell-balls coming out if it and looks more suited to feral urban hooliganism than it does to cranking out the Gran Turismo miles. 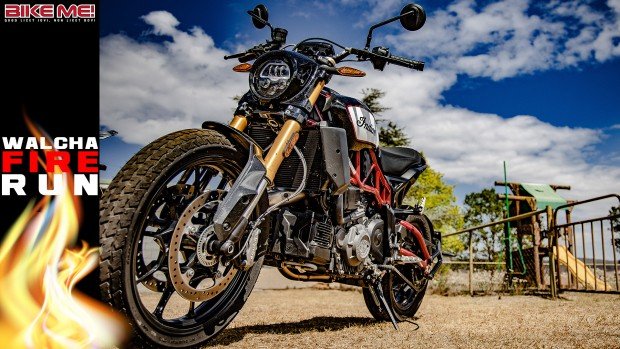 A welcome addition to any playground (pic courtesy of Vanguard MC Inc).

Happily, I come fitted with some spikey old-man hell-balls myself and I’m old enough to remember when the bike you owned was everything – adventure bike, tourer, scratcher, pantie-dropper – the lot.

Thus I did not give much thought to running the 1200S for a short 800-odd kay squirt up to Walcha and back via Thunderbolt’s Way and the fast bits of the Oxley still navigable during the bushfires.

I was immediately nonplussed by its luggage-carrying capabilities.

It has none. Yes, some can be fitted to it. But the one I had was stock – pure and unadulterated by such effete frippery. So backpack it was. No, you can’t strap anything to the seat with ocky straps. Stop asking.

No biggie. I don’t need much for a two-nighter. Usually the well-wishes of my wife and a smile from the Road Gods is sufficient. 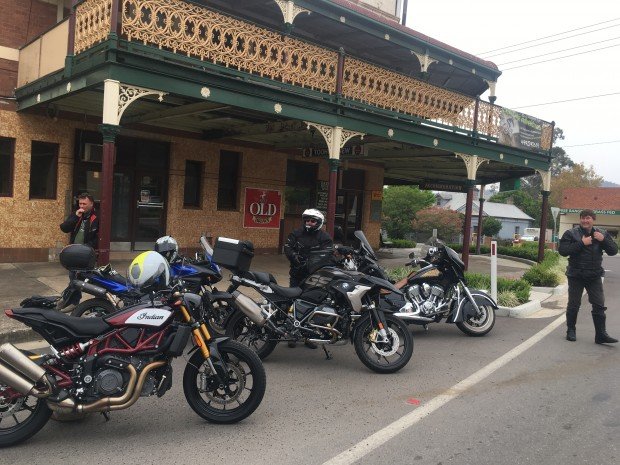 See how it emanates cool?

And off I went in the company of good men and true.

What a revelation the FTR was. I’d ridden it on the press launch in the hills behind Los Angeles, but that was an appetite-whetter, not a suppressant. I so wanted to do Aussie miles in Aussie conditions on it.

This thing actually banged and banged wonderfully well, no matter the road surface.

Sure, I missed a gear and almost died on the Gresford Road, but that was my ham-footed fault, not the bike’s.

And yes, its filling-with-petrol characteristics test one’s patience, but that’s one of its few delightful idiosyncrasies. 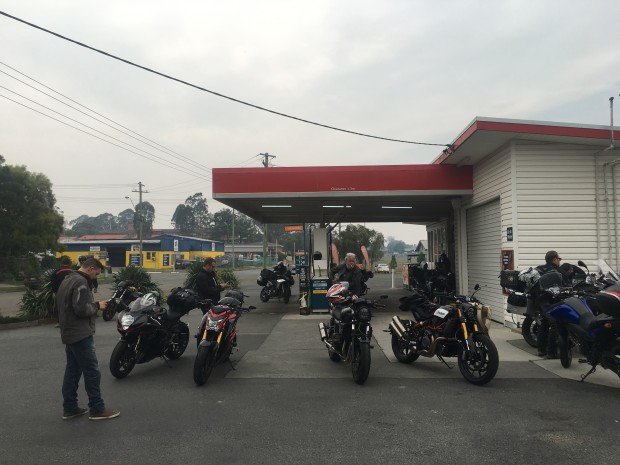 You are advised against filling the tank so that petrol appears in the deep funnel beneath the petrol cap – the tank is actually under the seat for a low centre of gravity. The instructions tell me overfilling it in this way can upset the FTR’s petrol sensors and fuel-inhaling abilities. So you musn’t fill it all the way up the funnel. And thus you have to fill it slowly and delicately lest you spray petrol into your face and people laugh at you.

It has another idiosyncrasy. It runs very warm. And not just when you’re sitting at the lights.

But I discovered if you fan your knees out like a dockyard party-girl welcoming the fleet, the heat is magically wafted away by the on-rushing air. It’s very much like magic. Or aerodynamics. Or voodoo. So there’s that.

In every other aspect, the FTR delights and excites. 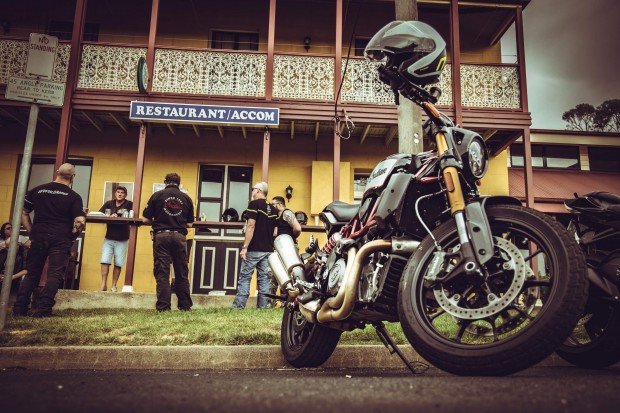 Look how happy everything is.

It’s edgy and torquey and very happy to charge along at 200-and-a-bit. Just hang on, because the ergos will challenge you at those speeds. But in a good way. A way that makes you thump your chest and growl like a man-beast. Just lean into the wind-blast and pray the swine on the Multistradas and ZX14s you’re passing value their licences more than you do.

It was actually far more comfortable than I expected it to be. The seat is firm and plush enough not to annoy your hams much at all. A normal Christian touring pace of 120-140 is very stress free.

And Lordy don’t it just love going around corners?!

The strange square-shouldered tyres work – they won’t last very long because they are well sticky, but I like that in a tyre. I did not shame myself or hold anyone up going up and down the range. Much to a few peoples’ surprise. The FTR tracks true, no question. It has far more handling integrity than people imagine.

But what makes it such a great bike – and it is a great bike – is the way it melds its unique styling with a true ability to bang. The torque delivery is all cream – fat and greasy, long and cheesy. And it’s right where it should be, ie. On the surfing line.

The controls are all on the handlebars too. Just where they need to be when they fall into your hands. More voodoo? I think so.

I was getting a shade over 200km to the tank, so I have no issue with its range.

I also spent a lot of time staring wistfully at it when it was parked, because it is beautiful and it is unique. It looks brutal, and purposeful – a lovely exercise of kinda-sassy and kinda-nasty few bikes pull off with any aplomb. Just look at its profile – it is aesthetically spot-on.

Riding it is very much like riding a giant motard in terms of ergos. But with more than just a head-knod to rider comfort. And when you apply yourself in a non-Christian manner, as you might do from time to time, it becomes a full-body, full-mind engagement. It doesn’t steer sportsbike quick, but then you don’t want it too. What you want it to do is hold the line, allow you to change it mid-corner if you’ve ballsed it up, and feed you lots of ‘This is what’s happening, pilgrim!’ info as you go.

I even hit a terrifying creature on the way home, thus giving myself over to the full Gran Turismo experience on the FTR.

We encountered a dire pea-soup fog climbing back up the range, and as I idled along in white-blindness, a massive back evil leapt at me from the murk.

“GLLAAAAAAGGGGHH!” I screamed like a woman and closed my eyes, since it is better to go to Jesus blind and innocent.

I copped a sizeable impact on my hand and shoulder which knocked the right-hand mirror loose, and left the corpse of a savage bush turkey on the road for someone else to mourn. 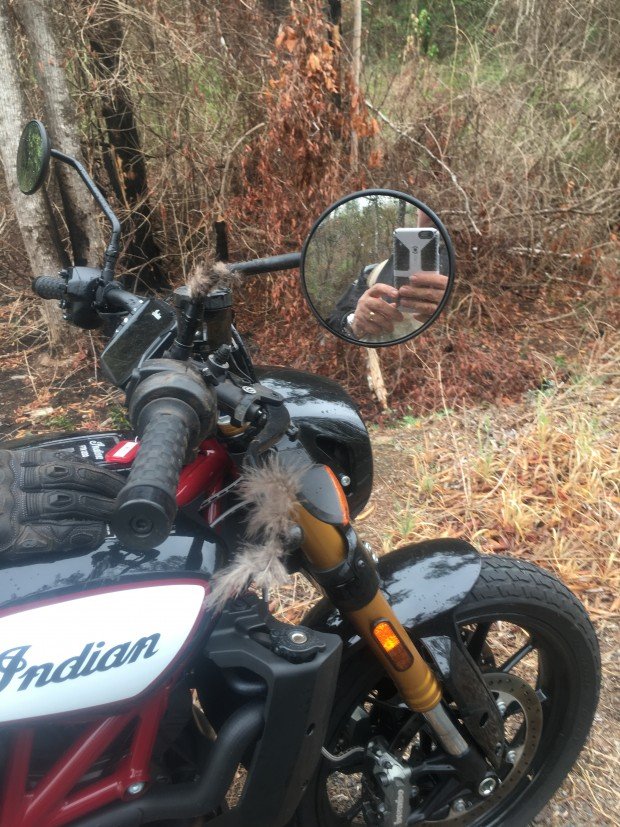 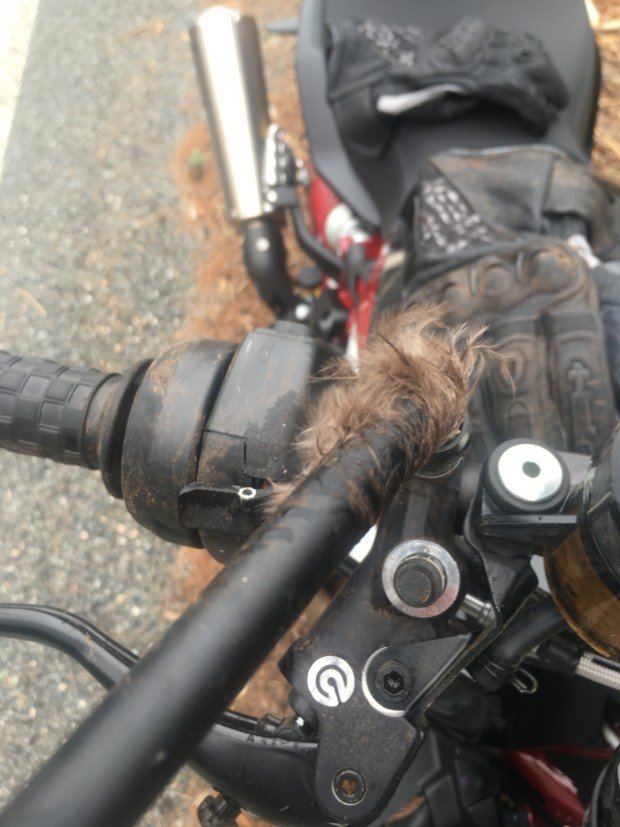 Made my skin crawl.

I got to the bottom of the range and my brother Mick gave me tools to tighten the mirror back up while I urrghed with disgust at the vile grey bird slime on my glove and bits of the bike.

Great run, all up.

Look, in all honesty, I’d own one of these in a sec. They sound great, the go hard enough, and they look utterly stunning. It is the coolest bike built in a long time – and that is no small thing at all.

And you can tour on them because chest-beating validates us us men.

YOU MAY READ MY PRESS LAUNCH REVIEW HERE. IT’S GOT ALL THE SPECS AND THINGS.