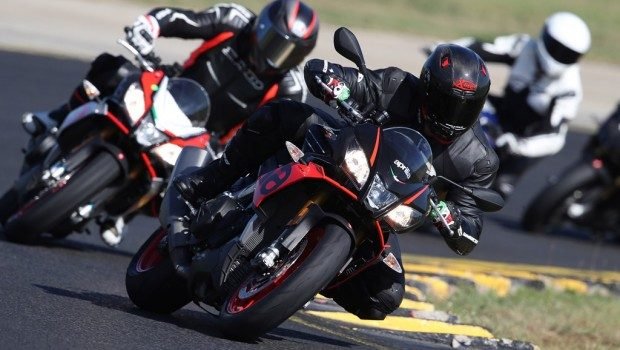 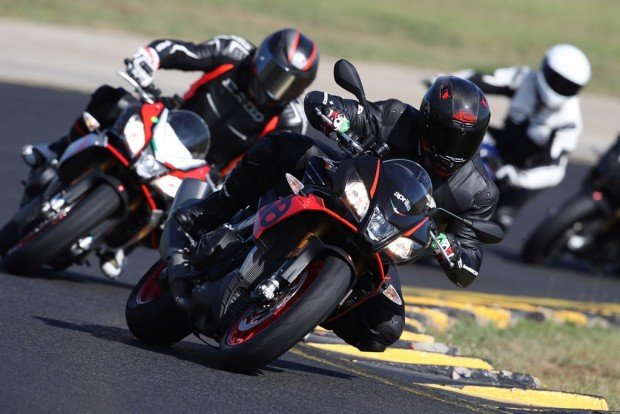 I came away from the press launch of the 2019 Aprilias buzzing like a Geiger counter inside a Chernobyl cow.

I wanted to write things immediately. Crazy things. Scribblings of maddened passion that made my poisoned soul sing.

Instead, I did nothing but…well, absorb the experience.

It took some time. There was much to absorb.

I did damn near 50 laps of Sydney Motorsport Park that day – most of them in a delirium of awe at what true cutting-edge technology has become on a bike. 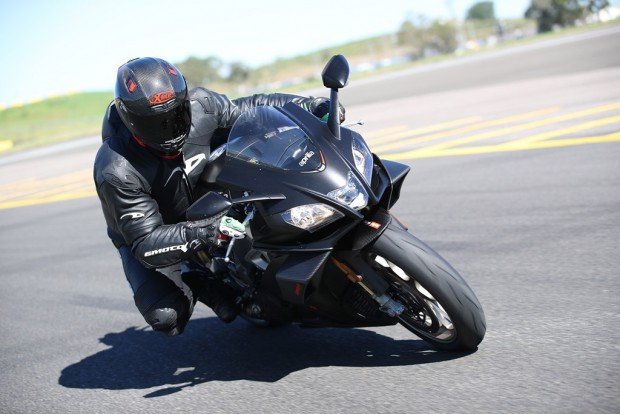 Winglets. No, not me.

And how that technology enables a muppet like me.

This is what is important about the new Aprilias. Their ability to enable you in ways you never imagined.

I don’t now care and never have cared what racers think of bikes.

I don’t understand racers who think anyone should care about their opinions. I understand magazines used racers as guest bike-testers in the past hoping to eke out a few more sales, but those days are long gone.

I cannot relate to these god-like race creatures. I have never been able to.

If say Mick Doohan told me the new Kamahazuka 1200 pushed the front coming out of Turn 12 and needed more preload in its sprockets, I would nod. Then I would shrug and move on with my life, riding pretty much how blokes my age with my mileage ride, and not giving a shit what Mick thought.

I’m telling you this because I need to be clear that at no stage did I dominate these bikes. I did not push either of these Aprilias into a corner, belt their throats with my elbows and put the slipper to them until I smelt poo.

If you want to read that kind of review, there are several almost…cough, Shakespearean efforts floating around the place. 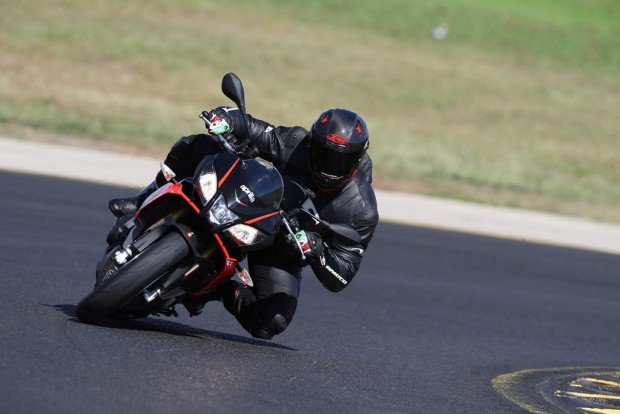 Not the steam off a racer’s wee. Still banging, though.

My review is what a big, poor-tempered, 58-year old man, carrying a swathe of injuries and morbidities thinks about a pair of bikes which transcend his previous bike-parameters.

I will review two very different bike in this piece.

One I would buy in an instant because it is the best naked bike on the planet today.

One I would love to buy, but I can’t live with 217 horses laughing at my inadequacies every time I walk past them in the garage. Maybe you can.

So let’s talk about that one first, shall we? 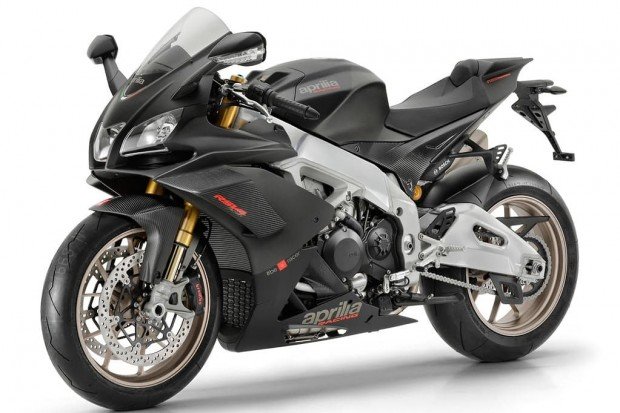 Made from the fibres of carbon and evil.

The specs are at the bottom of the page if you need to touch yourself some.

I have ridden both Glenn Scott’s and Daniel Falzon’s ASBK spec bikes.

This is Aprilia’s flagship.

The most powerful road-legal motorcycle it has ever built. 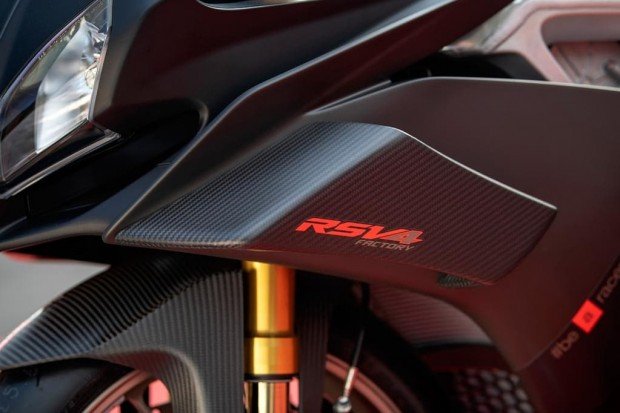 All the MotoGP, all the time.

It emanates exclusivity like the supermodels you see lounging on yachts in gangster-rap videos.

The difference here is you can actually throw your leg over an RSV4, use it, and then lock it in your garage. Turn the lights off, even. No screaming. Just the hypnotic tick of an engine cooling its jets.

I did maybe 15 laps on the RSV4. The first two were terrifying. The next 13 were shameful. I could have gone much faster. But I felt I was going fast enough. Once I get to a certain velocity, I stop breathing properly. Then I will pass out and die. So I take 24 breaths for the 12 corners of SMSP and don’t breathe at all down the straight. Any less and I black out. 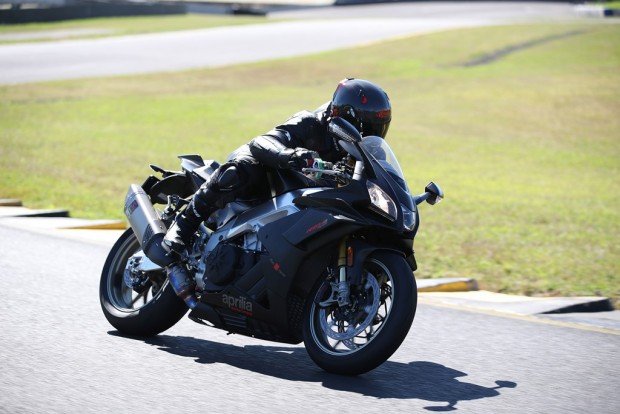 But you do what you have to do.

The RSV4 is a true weapon. Well-mannered to a fault, thanks to its brakes-and-suspension package, and totally engaging and absorbing to ride even though you can tell it has the ability to launch you into outer space via the orthopaedic ward.

It doesn’t want to do this. But it can. 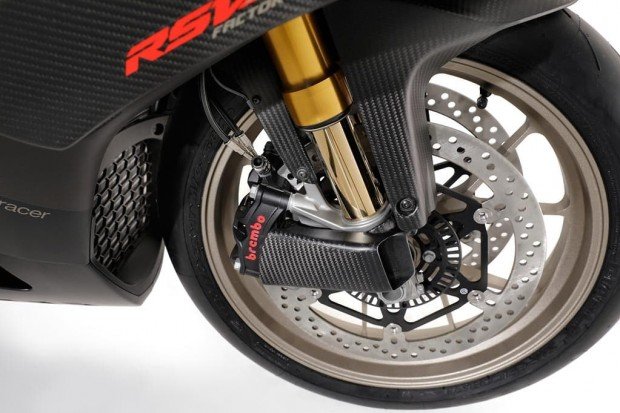 To suck in small animals and make them part of the braking system. Genius.

You can so tell this. You feel it in your right hand and in your tingling sweetmeats. There’s a timorous, urgent thrumming that feeds into you from that staggering V4 engine – it’s captivating and overwhelming. And so Aprilia.

And damn me for being maybe 20-years too old and slow to really paste the bastard. But there you have it. 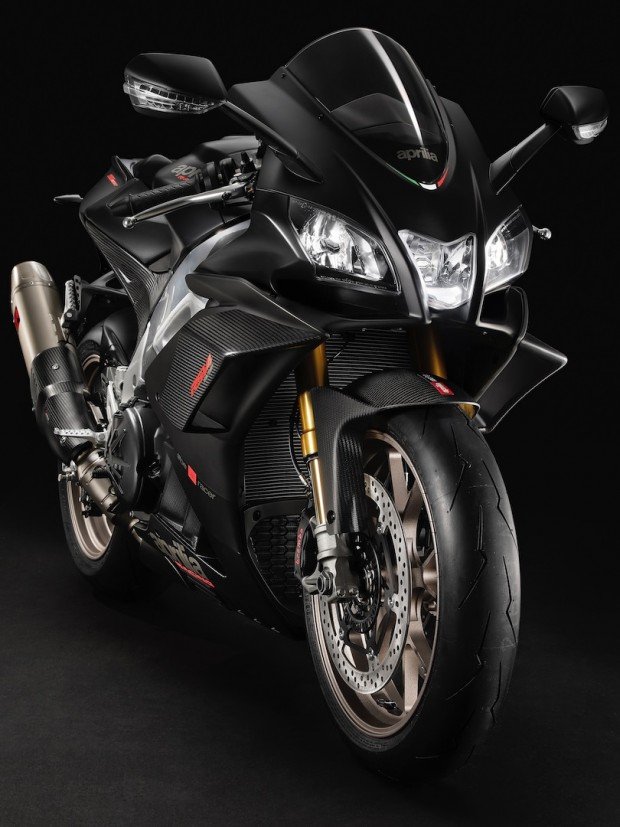 The Father of Dragons.

In terms of practicality, it is certainly roomy enough and not at all sportsbike-crippling like its predecessors.

It lacks…well, that’s not the right word because it lacks nothing, but the incredible sentient suspension on the Tuono Factory is not fitted to the RSV4. That could be a weight thing. It could be a look-at-my-balls thing. I don’t know. I don’t care, either. Nor will the gladiators who buy the RSV4. They will just have to put up with Ohlins NIX and TTX and Brembo Stylema gear. 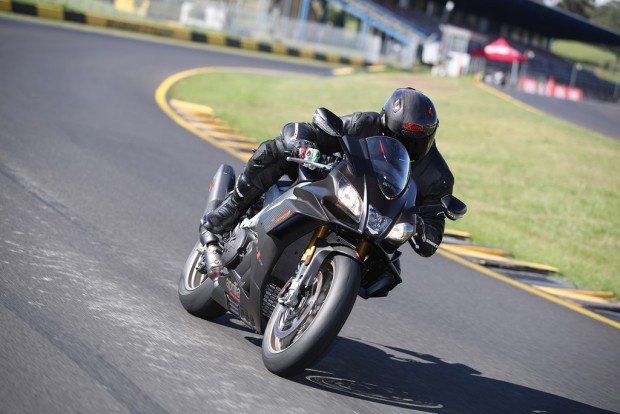 Oh, and they will also have to put up with the MotoGP-like carbon-fibre winglets – which work at 300km/h by providing 8kg of downforce…so yeah. Just so you know. 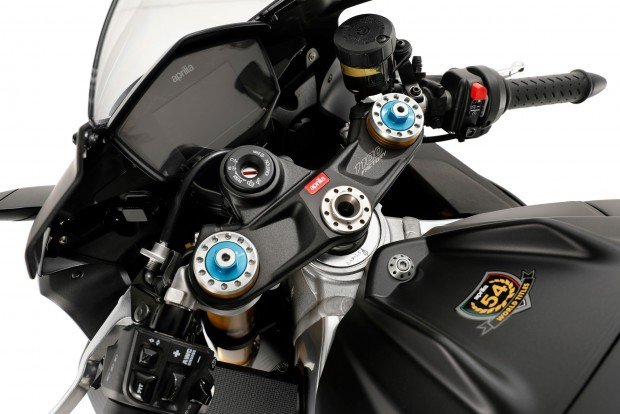 So that’s another reason I cannot have one.

What kind of bullshit temptation is that, Aprilia?

You can’t race it – well, not legally ’cos it has too many ccs, but what you get up to on Sunday out the back of Sofala is your business, and there is a 1000cc version if you wanna go ASBKing.

Give it my regards and my respect. Tell it I said: “In another life…” 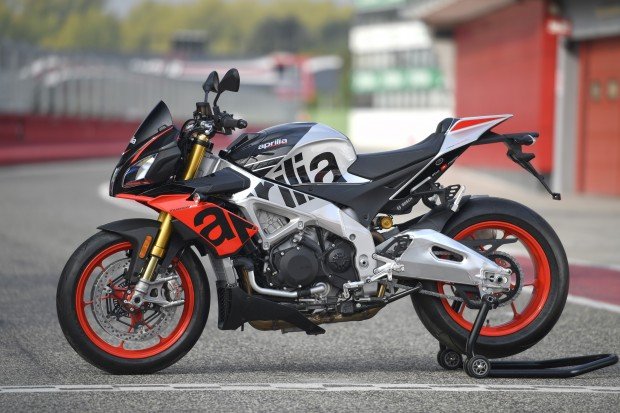 So that brings me to the Tuono Factory.

I did 35 laps on this. Perhaps 40. I wasn’t counting. I was too full of my own beautness to worry about numbers.

And I did those laps easily – from both a physical and mental perspective.

That is the true glory of the Tuono Factory. 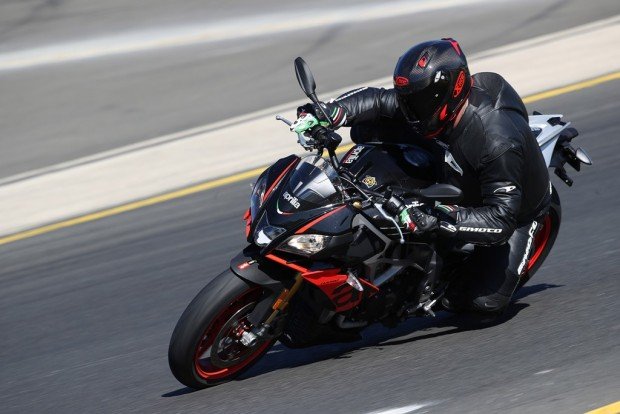 Nope…haven’t crashed here yet, either.

Stylistically, it hasn’t changed all that much from last year’s model. And you might have to backhand some information into ignorant people who might mistake it for a previous model. The engine is also not the same as the Father of Dragons unit in the RSV4R.

The Tuono Factory only makes a mere 175 horsies. But its torque is about the same (121Nm) as the FOD. So bear that in mind, doubters.

But what truly sets it apart from previous models and from every other bike on the market, is its suspension. This is what makes it the best naked bike in the world.

It’s a head-root at first. 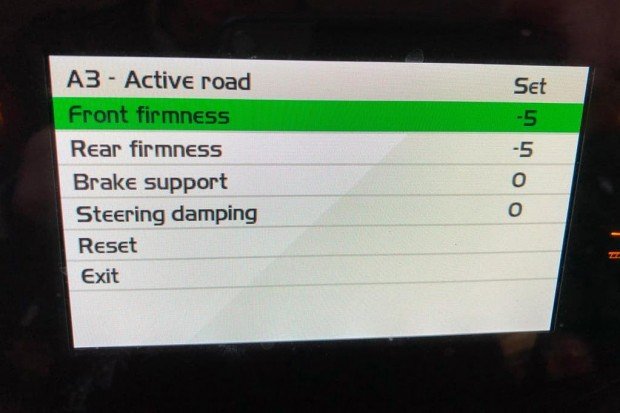 The minus means softer. You can go to plus five. Or plus 21 on the damper. 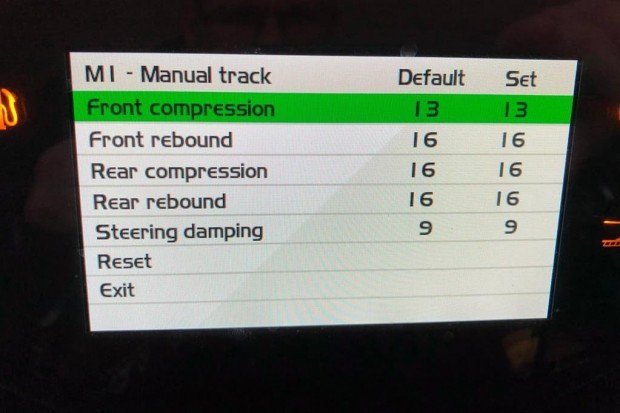 You start pushing buttons on the TFT screen and you see things you don’t quite grasp but know are important. You try to come to terms with 21 different settings on the steering damper. You fail.

You lose your mind completely when you’re told the active suspension uses Smart EC 2.0 Öhlins-developed software (the rest of the world uses the previous 1.0 iteration) to think for you, and (and this will certainly melt your cortex) it will predict what’s going to happen next by analysing the data it’s being fed. 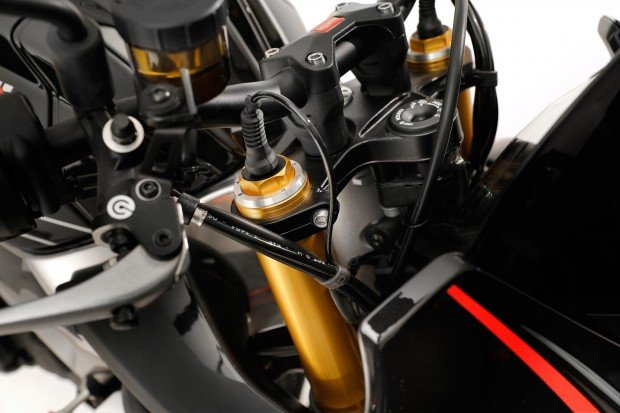 AKA – I’ve Got Your Back, Dickhead.

What happens when you’re riding it like a mad gibbon is it will prepare itself for the next event. For example, it knows that after a period of full throttle there will be a corner. It thus prepares to deliver you into that corner with grace and purpose by decreasing the amount of fork dive by speaking to the Brembos. 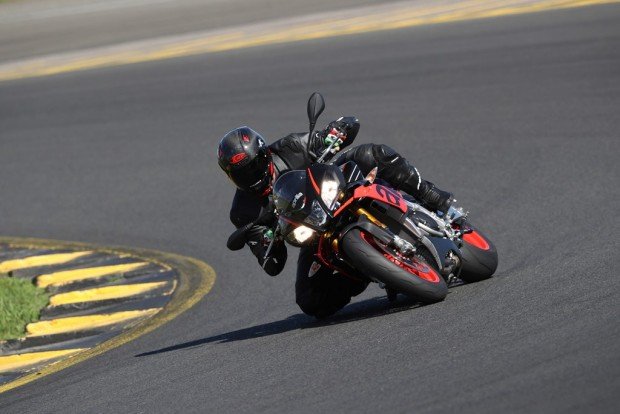 Aprilia call it the Objective Based Tuning Interface (OBTi). They could have called it Jesus.

Like Him, it is omniscient. It is constantly analysing and measuring everything (including the rates of change of everything) – what gear, what speed, what revs, the yaw, the pitch, the crap you’re doing with the throttle, the lean-angle, brake pressure, where Venus is in relation to Saturn…

Sure. But so simple to adjust and use. 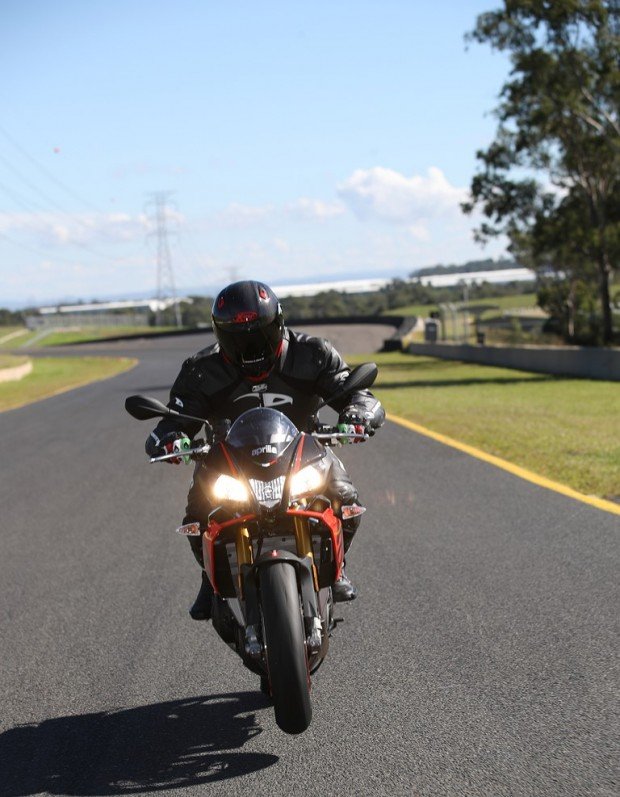 Aprilia has understood only a few of its customers are trainspotting techno-nerds. Some of them, like me, have tattoos and are simple-minded.

To that end, you can easily adjust its suspendery performance things on the TFT screen because it uses simple terms. Wanna make the front firmer? Just toggle the arrow so its firmer. Same with the back. Want more engine brake? Same. Less? Just ask.

Then you can programme it all into one of the custom maps, and then experiment with everything else.

All the witchcraft off? Sure.

All the witchcraft on? Easy.

How about some black magic with the white magic, ragazzo? Nessun problema! 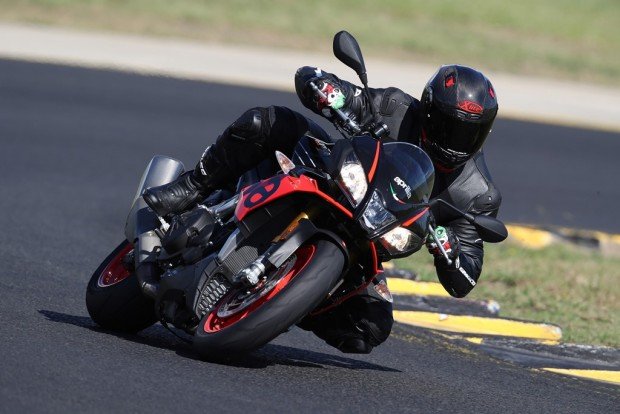 So many chicken strips.

What that all meant for me was I was quite suddenly and surprisingly dragging my knee around corners.

I have done this on other bikes. But I have never felt the level of confidence I felt on the Tuono Factory. It was inspirational. Corner after corner, it just served up stability, assurance, and bits of knee-slider with utter insouciance.

Because it was ergonomically better-suited to the road than the RSV4, I found it totally stress-free to do lap after lap. I’d come in for petrol, gag some water down, and then belt straight back out there like I was 25 and showing off.

Gavan Moody, Piaggio’s Brand Manager asked me if I was alright. He looked legitimately concerned.

“I’m a Goddam Tyrannosaurus!” I replied. “Of course I am alright!” 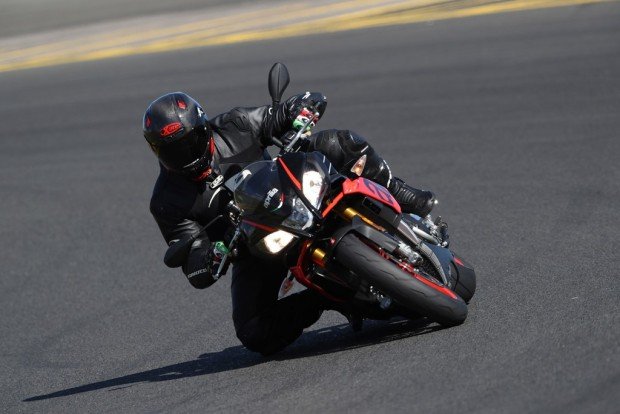 The Factory just worked for me, I guess. I fit on it (or in it), it let me ride it like I knew what I was doing, then it let me ride it faster than that. It sounded like only an Aprilia V4 can sound and when I close my eyes, I can still hear it. I am not a tech fan-boi, but when the tech is this good…this effective and sentient, well, I’d have to be retarded not to bow in reverence. Anything that makes me faster, sharper, and more confident is priceless. The Tuono Factory does that like no other bike for me.

I even think the $27,190 (plus ORC) price is perfect. It will keep the povo wannabes away.

I am, of course, fascinated to know how this amazing package will work on the road.

I hope to get a chance to do some miles on the Tuono Factory. See if it can dodge kangaroos. See what happens when the surface changes. See if it will tell me that was a Highway Patrol car I just passed. You know, important things.

I love it. It is brilliant because it made me feel brilliant. 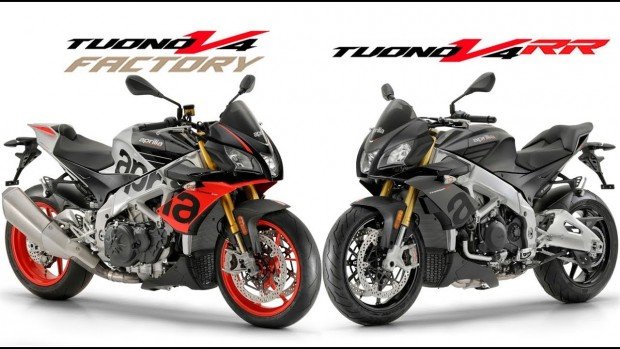 The Boss and the Under-Boss.