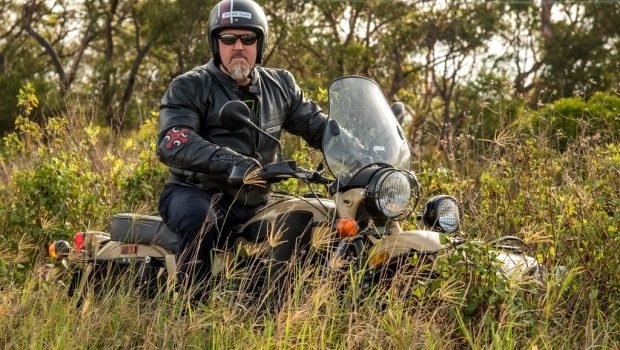 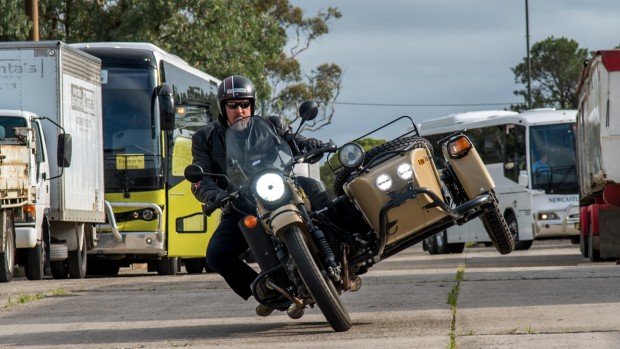 And whatever is going on is being lit by LEDs. And the hatred of bus drivers.

There is so much going on here.

Most of it is spectacular and hilarious.

Some of it is terrifying.

But all of it is appropriate for the task at hand.

Or, if your Russian is less than fluent, “Death to Fascists!” which was one of the Soviet war-cries during the Great Patriotic War (aka WWII). 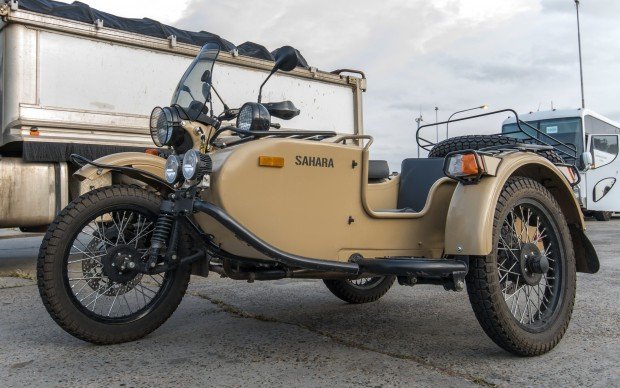 There is a certain grand military presence to it, especially when it’s painted in desert brown. Eat your heart out, Afrika Korps. 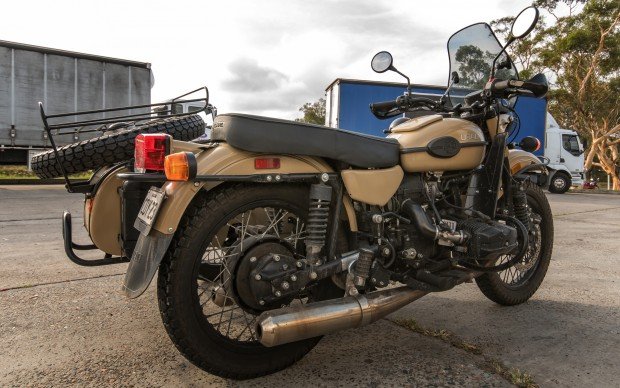 Yes, it is a little soiled by my use of it. And it seemed altogether pointless to wash it so that is sparkled.

The first was a general howling as the Red Army advanced, the second was something the great General Suvorov came up with during his trouncing of Napoleon, and the third came in handy as the Red Army crossed into Germany in 1945.

The Russians knew war with Germany was inevitable. Even though everything looked very chummy at that time via the Molotov-Ribbentrop Pact, both sides kinda figured it was going to go to shit eventually.

The Russians understood rapid movement was the key to the next war, and their current crop of steppe ponies and wagons pulled by angry babushkas was not going to cut it against the German Panzer divisions. 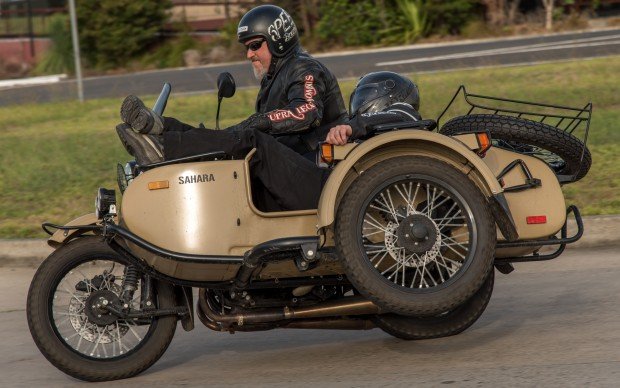 It takes extra effort to float the boat when there is a passenger reclining in it. But we persevered. Like men. 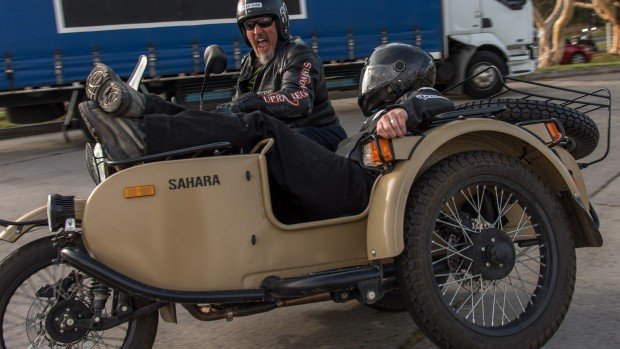 There was some screaming. Not much. But some.

The first Ural was modelled on a BMW sidecar called the R71. Legend has it five of these were secretly purchased by helpful Swedes and brought to Russia. In all likelihood, the Germans (ironically, as it turned out) simply supplied their Russian then-allies with the drawings.

In any case, Soviet engineers created or reverse-engineered the Beemers and in 1941 showed Papa Stalin the Dniepr M-72 – one of which still exists in the IMZ-Ural factory in Irbit, Russia. 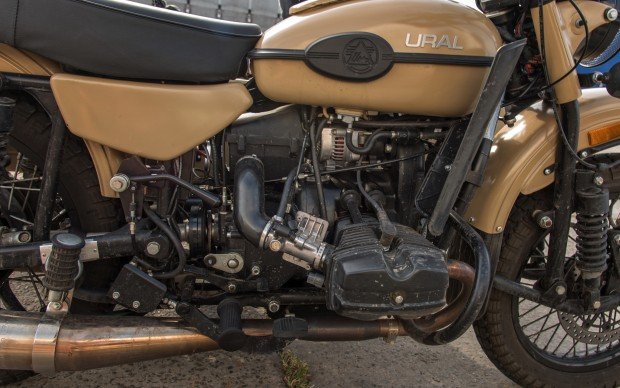 Nothing but the finest kulak engineering.

It’s a few hundred kms north of Kazakhstan in the Sverdlovskaya Oblast region of Russia – which is sort of in the middle there. If you get to the town of Alapayevsk from Yekaterinburg and turn right, you’ll find it. If you hit Verkhnaya Sinyachikha, you’ve gone too far.

The Ural factory is there because that’s where Stalin moved it to so it would not fall into German hands as the Nazis advanced into Russia. And it was left there after the war. Probably in case the Germans ever decided to come back for another crack.

Which is always possible in the Russian mindset. 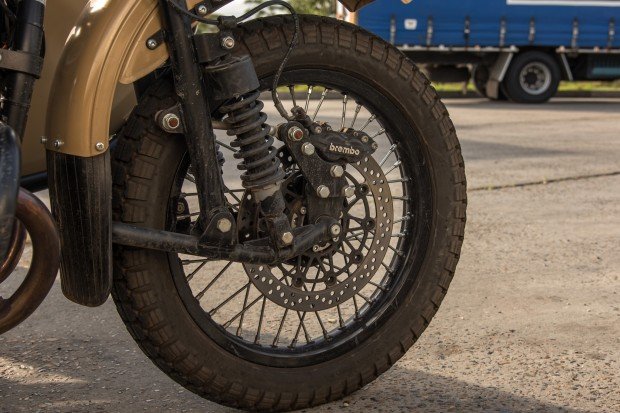 When the Russians take back Italy, they will be known as Brembov brakes. 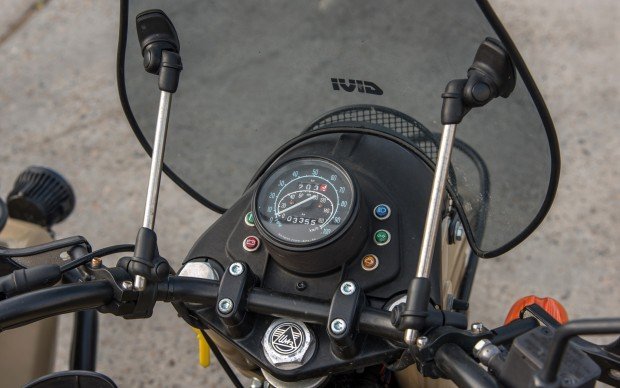 The Givi screen is an accessory. I don’t think it did anything but shake wildly over 100km/h.

Anyway, IMZ-Ural still produce motorcycles to this day, and they are still vaguely modeled on the old Beemers, though they do now have a flavour all of their own – and it’s a flavour more informed by borscht and piroshki than by bratwurst and sauerkraut.

Of course, today’s bikes boast fuel injection and Brembo brakes, but they are magnificently industrial in their appearance. And people who don’t know think you’re riding a vintage motorcycle.

Why is that important to your understanding of the Ural?
Well, non-Russian sidecars were designed as transport for the poor. You could put your family, or your tools, trade-goods, potatoes, coal, you name it, in one and off you went. 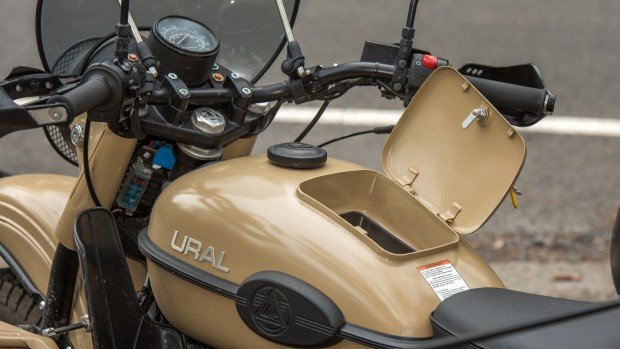 A lockable compartment in the tank. You can out your phone in there but it will be smashed to pieces. It’s probably better to put your ciggies and Tokarev pistol in there.

Russian sidecars were designed to defend Mother Russia from the Fascist hordes and to soak their tyres in their filthy blood.

So there’s a profound philosophical difference.

The Urals are a little…erm, rugged in both build quality and mien, but don’t let a few exposed wires and surface rust spots put you off. If I was going to cross Russia properly, like a man who wrestles bears, then there is no other motorcycle I would do it on. The Ural was specifically designed to deal with extreme temperatures, and seemingly impassable roads. If you’ve never seen them crossing that insane Russian river on Youtube, check this out.

IMZ-Ural produces the only adventure-ready sidecars on earth. It does this probably more as a matter of necessity, since Russia is a country made up almost entirely of appalling roads, dashcams, bears and drunks with AK-47s. There is simply no better vehicle to deal with Russia than a Ural.

This is a bike you can fix with a rock and lube with the fat of a yak.

What greater glory could there be?

Still, the one-wheel-drive Ural sidecars we get are simply hilarious to ride. 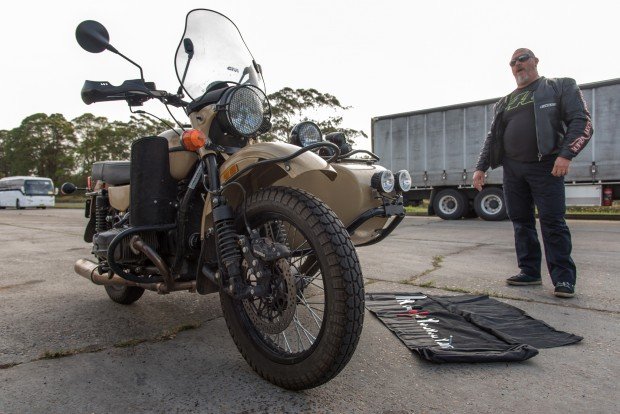 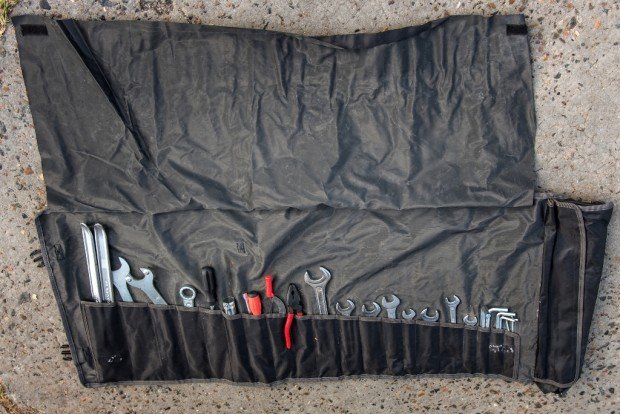 The tool roll is big enough to use as a sleeping bag.

And I know this because I have ridden several of them for many, many kilometres. So I’m certainly in a far better position to judge them on their innate hilarity than most anyone else in this country.

I actual ride them as a professional side-car tour-guide for Shelby’s Sidecar Tours in Sydney. It’s one of my many streams of income, but I’d deadset do it for shits and giggles. The terrified expression on the faces of the passenger when I change gear is priceless.
“Relax,” I say to them. “The exploding sound you just heard is me changing gear. It’s perfectly normal.”

And so much abnormality on the Ural is normal. Well, for Russians, I guess, and I know a bit about them too. 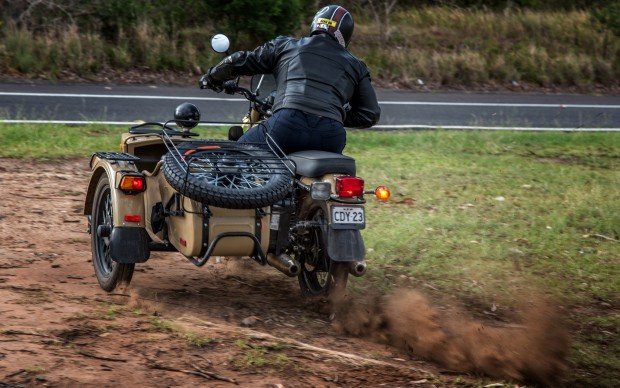 I tried to jump the highway, but failed.

Put aside for one second that riding a sidecar, any sidecar, is an exercise consisting of equal quantities of horror, skill and hilarity. Sidecars are the bumble bees of the motorcycling world. Bumble bees aren’t meant to be able to fly, but they somehow do. Sidecars certainly shouldn’t be as much fun to ride as they are, but they are. 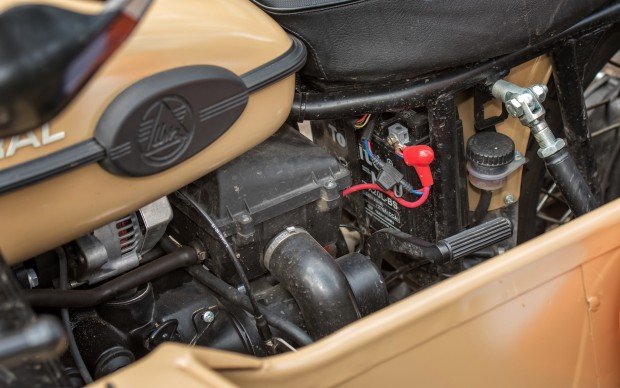 Exposed wiring because in the middle of a tank battle, you have no time to look for hidden wires. 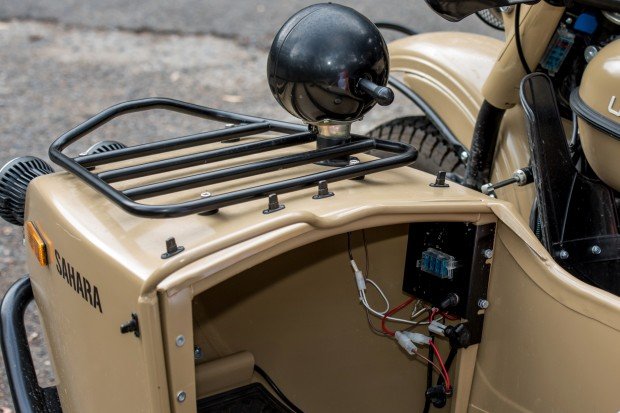 Daz thought I wired up the spotlight myself the night before. I was flattered.

Dial everything up to ten. Because Russia.

And always remember, sidecars are not nice equilateral triangles like them Can-Ams and Harley trikes are.

The three wheels actual describe an unstable scalene triangle. The outfit will either lurch left (or maybe it’s right. I forget) when you apply the rear brake, or not lurch anywhere when you apply the front, or do weird shit apropos of nothing, or lift its sidecar wheel into the air and propel you (if you’re unprepared for this phenomenon) into an oncoming truck, or corner harder around right-handers than you ever imagined until the tyres let go and propel you, once again, into an oncoming truck.

And with all of that going on, it’s also a great pretty-much-go-anywhere chugger.

I loved it. It made me crazy and forced me to use every skill at my disposal to stay alive and make relatively rapid progress. 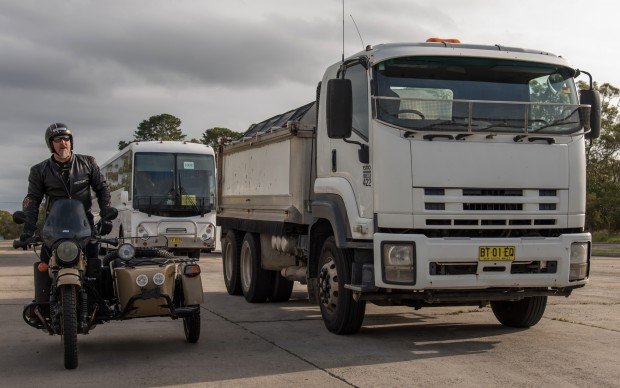 Hauling soil for glory of Motherland!

The engine is like a Russian peasant. Stolid, reliable and farm-strong. It will happily chug along in top (fourth gear) just off idle and accelerate to about 120km/h without hesitation, but with some anti-fascist vibration. Riding it any faster than 120 transcends hilarious, because no-one is happy in a Ural doing 138km/h. Not the Ural, not the rider and not the passengers. Note the plural. You can carry both your girlfriends in and on a Ural – one can sit in the sidecar and one can sit behind you. The one sitting behind you can whisper in your ear like an Auriga slave of ancient Rome whispered into the ears of triumphant generals: “Memento homo”, or “Remember you are only human…” in case you forget as you pilot the Ural. 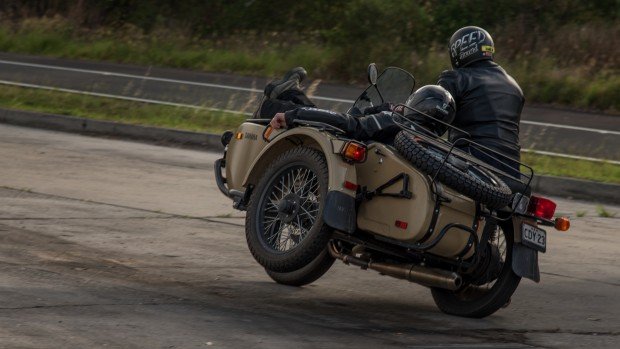 The outfit is pretty much indifferent to the weight. And you can seriously load the Comrade Motorcycle. The maximum permissible weight is 600-odd kilos. So because it’s Russian, I’m thinking 750kg is not out of the question.

That is an awful lot of carrying capability.

And in the Sahara’s case, not only can you fill its 83-litre ‘boot’ with everything you need, you can also strap car-loads of stuff to its many racks. It even comes with a spare tyre, a jerry can, and an entrenching tool. Because it is always possible those German Panzer divisions will come back.

Awaiting their return will be a range of Urals.

They all have the same 749cc boxer twin engine, drive-train and sidecar body, but there is essentially two models with two distinct frame types and with variants on each. 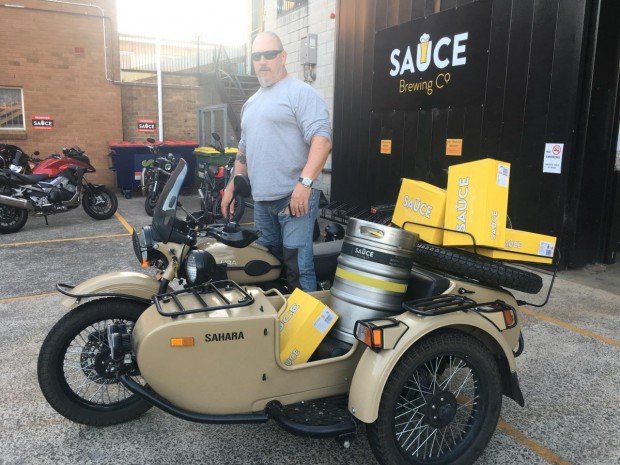 Yes, it does beer.

The Ranger (and the Sahara is a variant) is aimed more at off-road Mother Russia defense. Leading link forks, great ground clearance and 19-inch wheels. The Tourist is more passenger friendly, and the T model is a base, entry-level outfit without any accessories. Of course, the accessories are plentiful and interchangeable between models.

Then there’s the cT, which is aimed at a more urban environment, is lower, has a wider track and lower gearing. And finally the Retro, which seats you in a cruiser position, has a longer wheelbase and telescopic forks and is aimed at not going off-road at all. So this will be the first one to be crushed under the treads of the German panzers.

I hugely enjoyed my time on the Sahara, and I had it for a month. 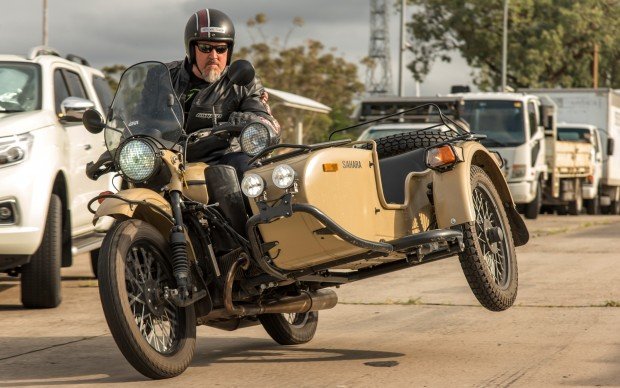 It very quickly became my default bike in the largely holiday-empty streets of Sydney. I did my shopping in it, I took my wife for rides in it (she far preferred being a pillion, but allowed it was a pretty cool way of looking at Christmas lights and drinking wine at the same time), I took my son for rides in it and floated the boat (sidecar geek-speak for lifting the outfit off the ground) much to his delight, and I took my mate Daz for a ride in it when we took the photos. He was nonplussed and felt he should have smashed more cones before getting in.

I became a fan of the Slavic Nazi-killer in spite of myself. Because at the end of the day, it was loads of fun belt around on. I plumbed new depths of terror each time I came into a corner too hot, and there were a few corners I felt were the last ones I would ever attempt. But I survived and thrived.

Sidecars are like that. You either “get” them, or you don’t.

I am proud to say I get them. 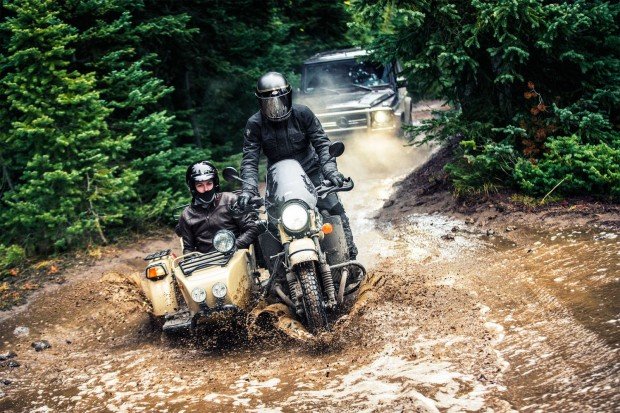 Not me, but you get the idea. It’s probably towing the car behind it.

I NEED TO KNOW MORE

Excellent. Then you need to go HERE. 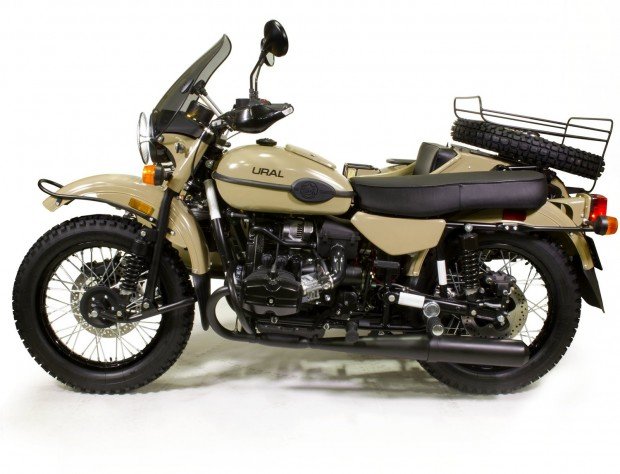 This is what it will look like before you use it.