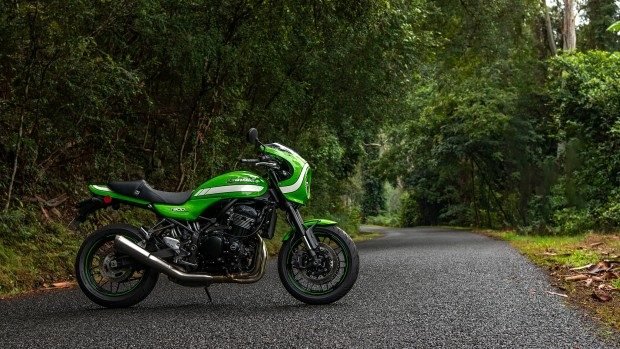 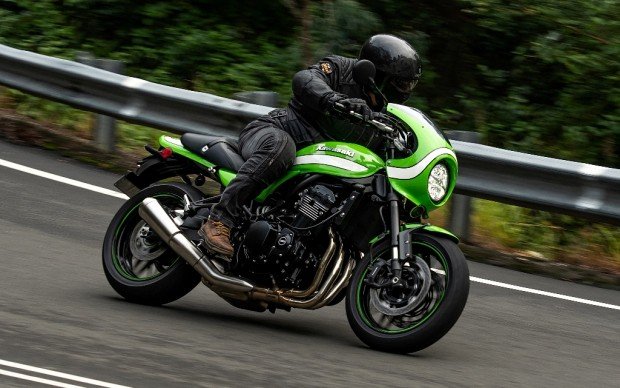 Truly a worthy bearer of the legendary name.

The original Kawasaki Z1 is one of the most beautiful bikes ever made. And it will always be thus. An aesthetically almost-perfect creation, its proportions divine, its silhouette peerless, and its performance in 1972 the stuff of legend.

It made me crazy when I first saw it. This is what a motorcycle is supposed to look like.

It predated my advent into motorcycling by quite a while (I was 11 when it first appeared), and while there was not much tolerance in my family home for crazy 11-year-olds, motorcycle magazines were not banned like Playboy magazines and I had a lock on my door. 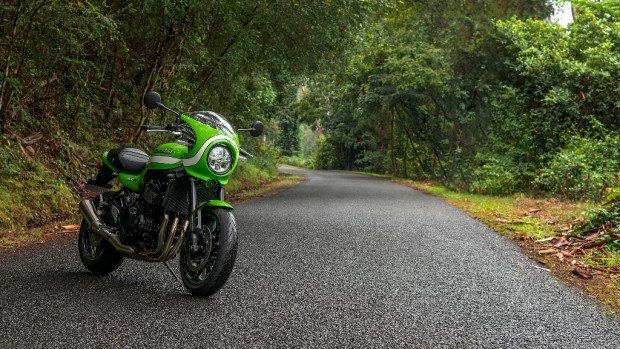 Out of the blue and into the black…erm, green…

The Z1 has a storied history which many of you will know. But for the new kids, it was the first of Kawasaki’s Z models.

It had been developed by Kawasaki working in conjunction with McFarlane Design under the project name ‘New York Streak’ in the late 60s, but it was held back from sale when Honda released its iconic 750-4 in 1969. Kawasaki wanted to go to market with a bigger capacity bike. And it finally went to that market three years later with a record-smashing bang. 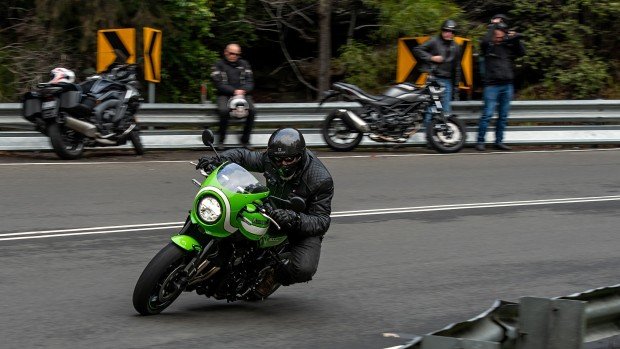 Who doesn’t like an audience? Especially one waiting for you to shame yourself on a damp road.

At age 11, I knew nothing of this. I may well have exploded had I known. This was 1972. Only alien spaceships went that fast. 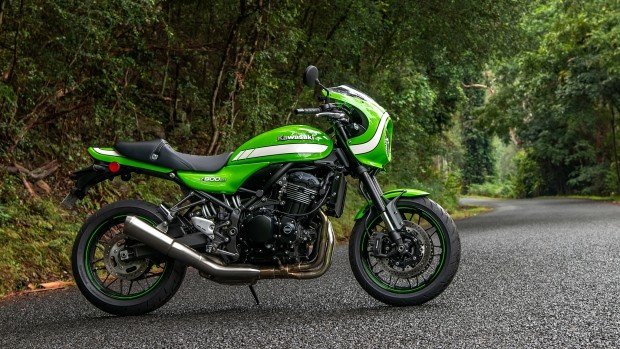 Kawasaki has nailed the look.

I learned of the record-breaking much later, not long after I saw the movie Mad Max in 1979 – which was the film that not only enamoured me of outlaw motorcycle clubs, but cemented in my mind the hard-edged, almost hypnotic appeal of the Zed.

I had, of course, seen Stone in 1974 and it had lots of very nice Zeds in it. It was also a really terrible film. I thought it was naff then and I think it is even greater rubbish now. I had no teenage desire to be like the pussified retards dubbed the Gravediggers. They looked nothing like the outlaws I saw riding around town.

It wasn’t until I saw the dystopian madness and violence in Mad Max, and was awestruck by the hard-riding feral malevolence of Toecutter and his boys (all astride very non-pretty but paradoxically more appealing Zeds) that I knew where my future lay.

My outlaw plans aside, it was the Kawasaki in both those films that filled me with that strange, humming, mechanical lust only correctly deranged motorcyclists suffer.

I even got to ride one, very briefly, when I was 15 years old. 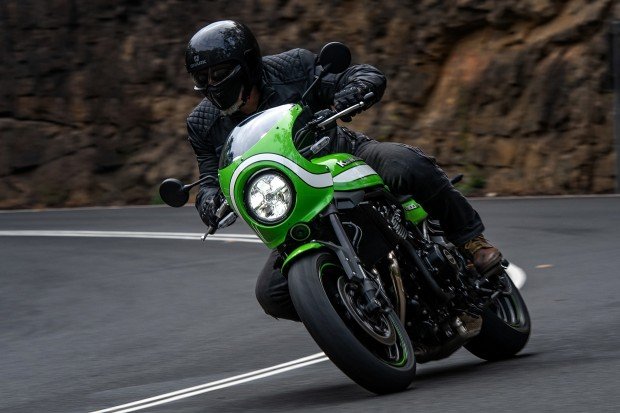 The headlight is excellent. And the white stripe on the fairing kinda grows on you.

A friend of a friend had one around the corner from where I lived in Leichhardt. He was maybe 20 and into all sorts of evil I was not privy to.

But the one act of evil I was privy to was the afternoon he got stoned and let me and my mate Roquelino (Rocky for short) ride his Z900 up and down the cul-de-sac where he lived. Sure, it was all first-second gear kid shit…but come on! The effect this had on me cannot be overstated. Even when I tore open my jeans and most of my thigh by riding it on the footpath too close to the low brick front-fences of Beeson Street, I was not deterred.

But I did not buy one.

By the time I was ready to actually buy a motorcycle, there were other things that were making me crazy and the Z1 was old technology.

I only tell you all this so you’ll know where I am positioned regarding this new incarnation of the original Zed.

And, as it turns out, I’m still kinda crazy about it.

It is, of course, as far removed from the original Zed as an AK-47 is from a flintlock. And that is just as well. We very quickly forget how diabolical those 70s monsters were compared to what we are spoiled with today.
And on the new Z900RS and Z900RS Café, we are quite spoiled indeed.
Now, first thing’s first. The only difference between the two is the riding ergos and the obvious styling disparities. Both are inconsequential to the way the bike rocks your world. Some will prefer the Jaffa-coloured unfaired RS, some will prefer the mean, green, bikini-faired Café. 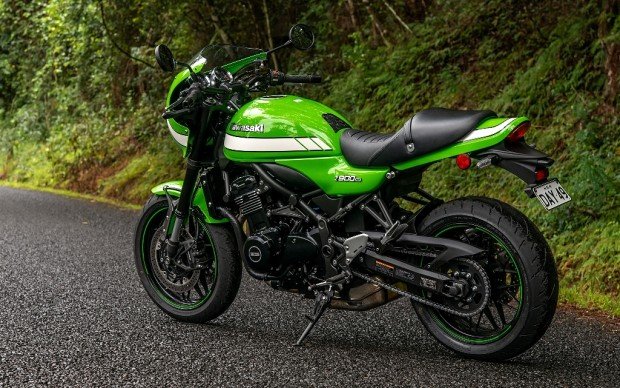 One of the cleanest and sweetest left-hand sides in the business.

It was entirely predictable this model would sell well for Kawasaki. The factory has perfectly nailed the old-school-with-a-touch-of-modern look, while simultaneously imbuing the bike with enough 2018 tech to make it one of the sweetest-riding motorcycles on sale today.

Hand on my heart I did not think it would be as good as it was.

Of course I’d hoped it would be something special, because a reinvention of the Zed deserved to be special.

It just had to be, damnit! Surely everyone concerned could see what was at stake here?

Well, everyone did see and I have not been disappointed. 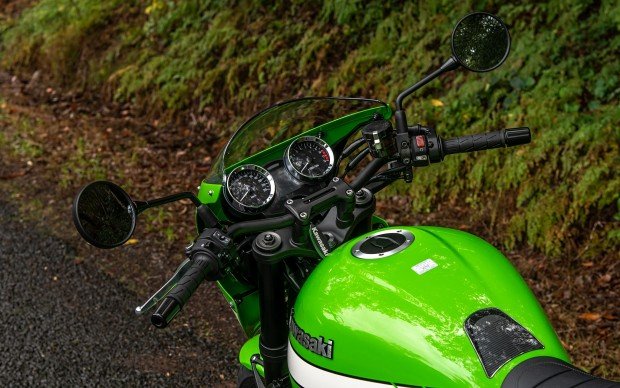 And please don’t be one of those thumbless whack-jobs asking why Kawasaki didn’t put a 1200cc engine into this bike.

Let us move on…

This is one of those bikes which, if you’re a little squinty about the fetlocks, is easy to dismiss on paper.

It weighs 215kg. So it’s on the lighter side of things, but it’s no whippet.

It makes 82kW and has 98.5Nm of torque. So it’s not going to set the world on fire in terms of performance.

But, and let’s be honest here, neither are most of us.

Where the fire burns and where magic lies, and there is indeed a certain magic to this bike, is in the way it utilises and then delivers its numbers to the rider.

The whole package feels wonderfully balanced and…well, poised. Like a guitar tuned just right. It makes all the good grunt right in the rev-range where you’re doing most of your riding and it just keeps making it. It’s happy to whirr along in top at 2200rpm – smooth and snatch-free (Kawasaki must be using witchcraft instead of fuel injection), and when you open the throttle it just punches on. And then on a little bit more. 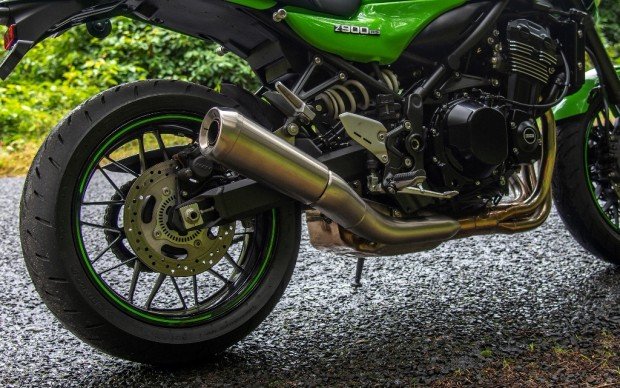 A factory four-into-one. Who’da thunk it?

Ridden in anger, its superbly rewarding without needing to be feral. It’s not at all flighty if you’re in the wrong gear at the wrong time and the corner is not really panning out as you’d intended. It tracks true, just like when Mr Bubba ran over Max’s leg.

Well-mannered is a hackneyed old phrase used to describe motorcycles that are maybe less-exciting than they should be. The Z900 is not so much well-mannered as it is well-bred. Note the distinction. There is nothing boring here. Great engineering is not boring. It’s great engineering.

You can ride this like a screaming disciple of the one true Toecutter and it will answer brilliantly. Or you can choodle along at the speed limit re-living your errant youth in shop windows on a bike that works wonderfully in both worlds.

That engine is an avatar of flexibility and useable torque.

I was constantly and consistently pleased with how the Z900RS did things.

The instruments are gorgeous – modern in function, old-school analogue regal in look. The pull on the levers was slick and light. The gearbox (abetted by an assist and slipper clutch – so a light lever-pull and no mad compression lock when you’re running from the Bronze) likewise redefined slickness and lightness, and made me consider perhaps Suzuki no longer rules in that region. 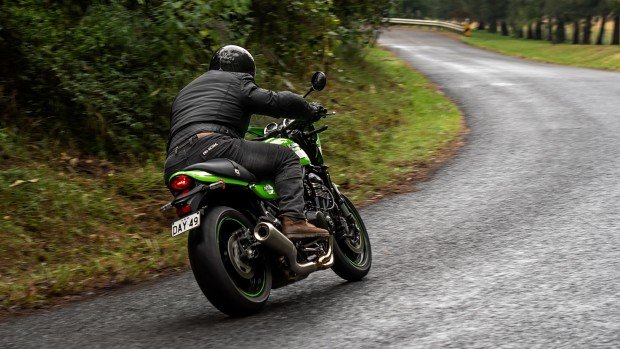 The song of its people is lovely. It’s great when the factories understand this.

The suspension (front is adjustable for preload, compression and damping, the rear is preload and rebound) never seemed ruffled or overwhelmed

And now the sound…

This is the first Kwaka with a tuned exhaust note. Kawasaki paid close attention to how it felt the bike must sound on start-up and low-speed running. And while I can vouch for how lovely the bike does sound in those two areas, you won’t be disappointed when you slam-shift it out of third at 10,000rpm either.

Yes, I would still put a pipe on it. Damn me for a sinner.

And I would also maybe look to replace the cast mags with spoked wheels. Kawasaki made a lot of its cast wheels looking like they might kinda maybe look a bit like spokes. Only spokes look like spokes to me. But then I should come to my senses and stop modifying perfectly good bikes with ancient mad shit that occurs to me when I drink too much red wine.

The Z900RS is comfortable all the time. Not just on short hops around town. The stepped seat is very consoling and looks pretty trick. And I actually prefer the very-so-slightly canted-forward Bubba Zanetti-style riding position to the more upright I’m-a-policeman ergos of the Jaffa-coloured RS. Too tall a seat height? Nah. Just right. Stop being short.

I initially struggled a bit with where the side-stand was placed. But that was only until I got used to turning my ankle a certain way to access it. This is one of the problems I have jumping from bike to bike. Owners will have no issue. 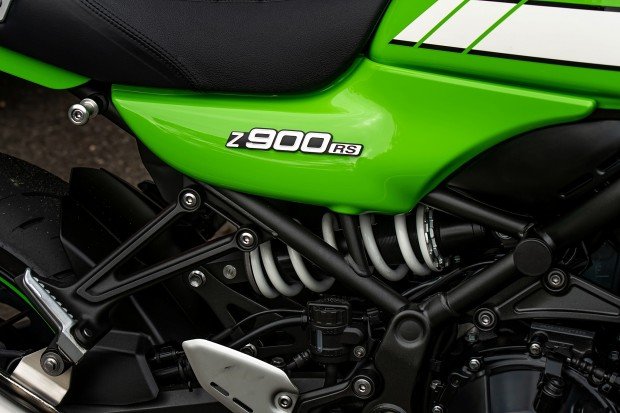 Horn is an eeper and of no consequence, but the headlight is good. Soooo much better than that rubbish from back in the 70s, as you would expect.

My general overview is one of a very high quality of finish. Kawasaki had clearly decided quality would be a watchword for the Z900RS. And it really is quite top notch. It gets more impressive the more you look at it. The levers, the pegs, the edging on the screen, the switchgear and the way it feels to use (the kill switch is cleverly coloured that old-style dull red of the original) – all of it looks and feels first rate, and it should age very well.

It’s really quite a glorious motorcycle.

And it must be a glorious motorcycle because it carries the name of a motorcycle that has become legend.

This is not a styling exercise designed to remove the senile from their superannuation. This has not been sent by the Bronze and there is no treachery in this.

This is the righteous descendant of the original Z1.

Do it for him, Bubba.

HOW MUCH? $16799 plus ORC. It also comes in a Pearl Storm Grey colour and has a two-year unlimited km warranty.

You may see all the specs HERE. 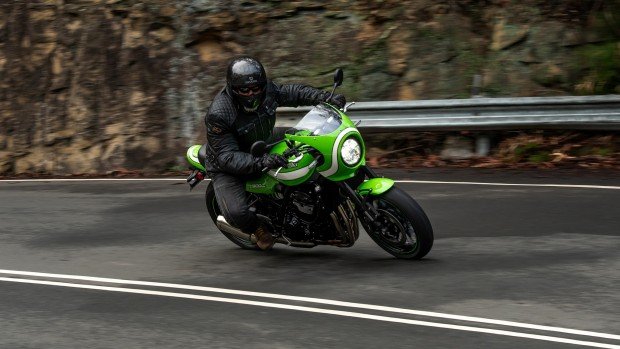 Thanks for keeping it damp, Putty Road.