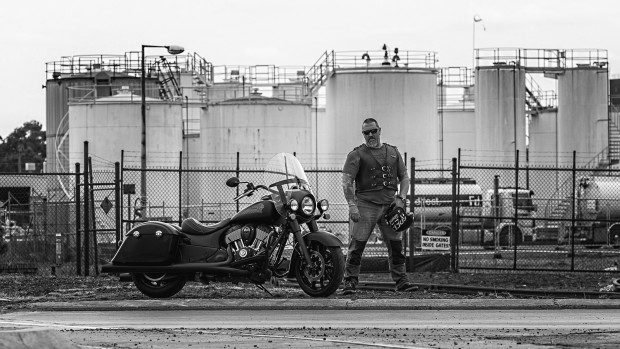 There’s a certain je ne sais quoi about matte black bikes. They’ve all got it. Every one of them.

You take any bike, perhaps a cheery red one, or a nice blue one, or even a sassy gloss black one, and you stand it next to the same model bike, but one painted entirely matte black, and it’s just no contest. At least for me.

I’m sure there are people out there who will choose the red bike or the blue bike, or even the glossy black bike over the matte black expression of motorcycling darkness, but they’re the kind of people I buy drinks for, open doors for, and compliment on their choice of little black dress. 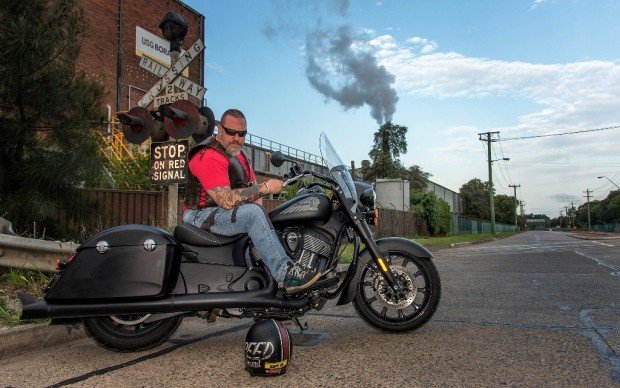 “Someone I loved once gave me a box full of darkness. It took me years to understand that this too, was a gift.” ― Mary Oliver

So that’s where I am regarding matte black motorcycles.

Whether those bikes come cloaked in absolute night from the factory, or you got fried on whisky and drugs one night, broke out the rattle can and did the deed yourself, it doesn’t matter.

All that matters is your commitment to the darkness.

“A man,” he wrote, “must dream a long time in order to act with grandeur. And dreaming is nursed in darkness.”

He might well have been writing about Indian’s Springfield Dark Horse.

It is grandeur and it is darkness. And thus it is everything I love in a motorcycle.

So if you’re reading this and expecting an objective bike “test”, let me just direct you to the technical specifications at the end of this article. 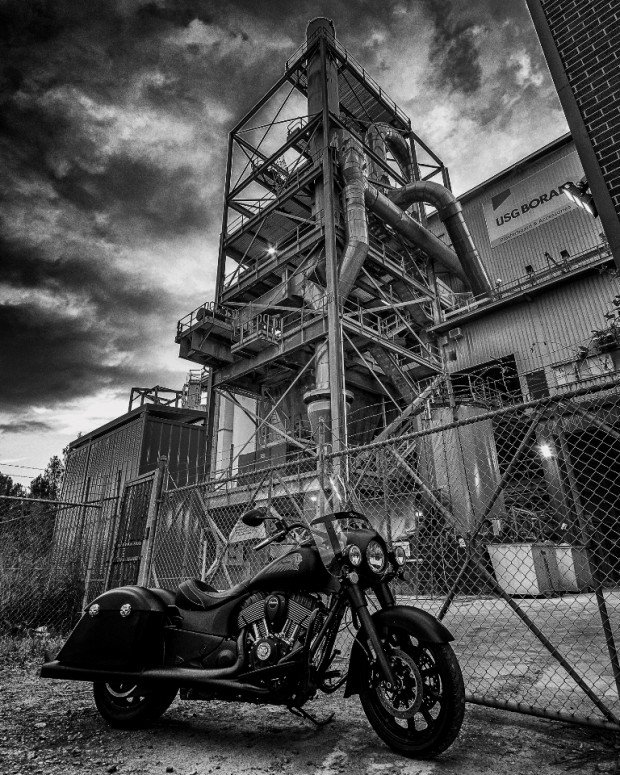 They are objective. You may absorb them and then compare them to other objective motorcycle specifications, and then you can pound them up your arse for all I care.

I’m too busy making out with the night. There is nothing objective in this.

I have never bought a bike based on its specs, or because I read some lame hack’s amateurish attempt at an objective bike review.

I have bought a bike because I liked its stance, or its fat rear tyre, or the way the engine looked under streetlights, or the noise it made, or the way girls admired it, or because it made me feel good to ride it, or because it ticked some indefinable (See? That’s that je ne sais quoi thing right there) primeval box in my head. Or all of those things and more. 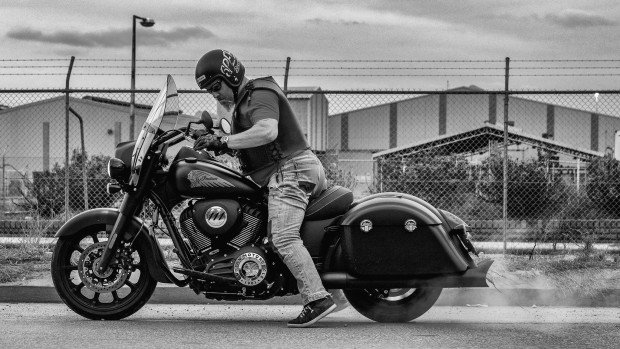 “Into the darkness they go, the wise and the lovely. ” ― Edna St. Vincent Millay

I have never once bought a bike based on an objective set of numbers or parts.

Why would I? Why would anyone?

These are motorcycles we’re talking about here. The most irrational, intense and subjectively defined machines on the planet. To be objective when discussing motorcycles is to not understand motorcycles.

And that’s how I feel about the Springfield Dark Horse – a big, black, thundering, grand imperator of a motorcycle – the riding of which pleasures me immensely and deeply.

It’s got that whole evil-black evil-dark evil-evil thing going on – arguably better than any other bike. A set of mini-apes, a rumbly exhaust, and we’re done here, ladies and gentlemen. 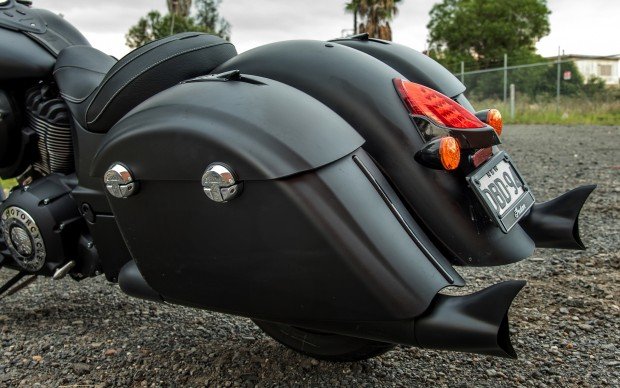 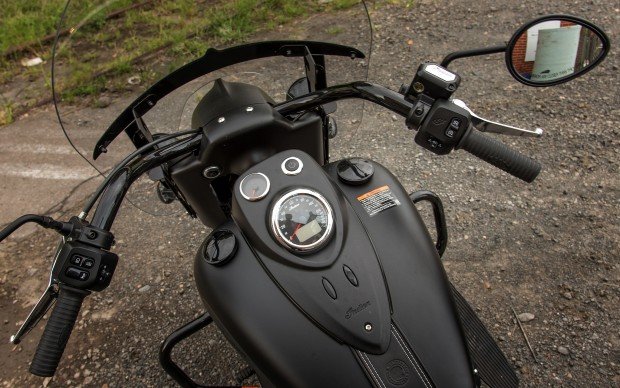 “How can I be substantial if I do not cast a shadow? I must have a dark side also If I am to be whole” ― C.G. Jung

It’s big because big is good and right in this niche.

It’s not ponderous so much as it is majestic.

It makes me feel like a gunslinger and a knife-fighter and an outlaw, and just because I don’t do those things any more, doesn’t mean I don’t like feeling like I still do.

In the Springfield Dark Horse, you have a solo-seated melding of the Indian Chief Dark Horse and the normal Springfield. And it is now my favourite Indian because it now has hard luggage.

Practicality aside, the panniers do much to dispel the aesthetic…well, awkwardness that happens on the big Indians aft of the seat.

Painting the entire jobbie matte black was so the right move with the Chief Dark Horse. But the addition of panniers to the night-black paint is a major styling coup that has completely dispelled the mild clumsiness of the aesthetic at that end of the bike. 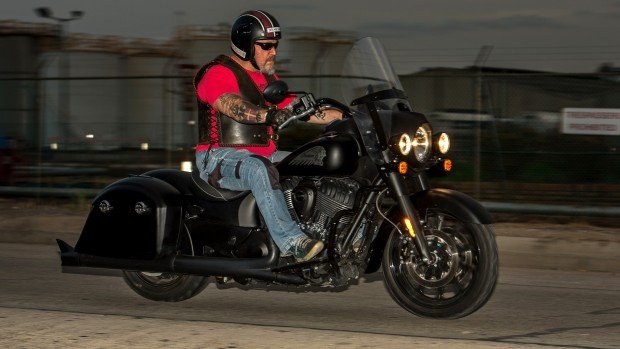 “There is darkness inside all of us, though mine is more dangerous than most .” ― Jenna Maclaine, Bound By Sin

When I took possession of the Springfield Dark Horse, I noticed it came with the finned exhaust-ends, which indicated it would make that rumbling sound I love so much.

The exhaust ends also ripped massive gouges in my shins when I forgot the pipes extended quite a way out from the back of the bike. And I spent quite a few long minutes hyperventilating in my garage, fighting back tears, clutching my wounds and rocking backwards and forwards.

The pipes would also grind out on tall gutters when you were careless in backing the bike into a parking spot.

I would still put these exact same pipes on though. Some things just need to be, amen. 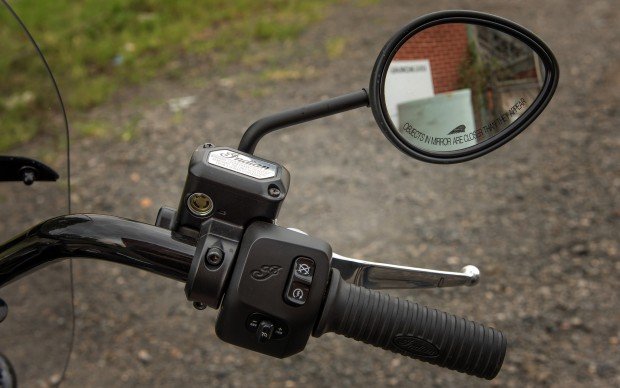 “Use the wings of the flying Universe, Dream with open eyes; See in darkness.” ― Dejan Stojanovic 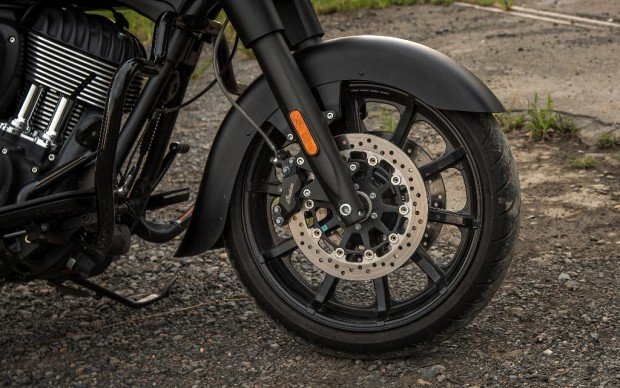 “I mean only that I hope they find darkness or paradise without fear of it, if they can.” ― Erin Morgenstern, The Night Circus

You see, American V-twins need to exhale and inhale properly. The communist-hippies who love polar bears, screech owls, and soy beans demand these motorcycles be strangled and subjugated. And the factories comply because it’s easier to comply than have crazed mobs of communists picketing the factory every day.

Ultimately, it doesn’t matter. The factories know that righteous folks, like me, will make every effort to ensure their big American twin will inhale and exhale like it’s meant to do even before it leaves the showroom.

So there, hippies. Your enviro-angst is pleasing to me because it is ever so pointless.

When I took the Dark Horse out west and let its wondrous exhaust note chase me to the ever-receding horizon, I didn’t think much about the environment.

When I parked it front of small country pubs and bathed in the compliments of the locals, I did not once think about soy milk or mung beans.

When a pretty girl told me my Indian Springfield Dark Horse was a “beautiful bike” I did not spare a single thought for the welfare of the spotted turdwing.

All I thought about was riding the darkness some more and somewhere else.

The seat was spot-on. The ergos were great for bigger people – and Indians feel physically bigger than their competition. I’m ever so good with that. If I’ve bought a big bike, I want it to feel grand and majestic and imperious and mighty. The Springfield nails that feeling. 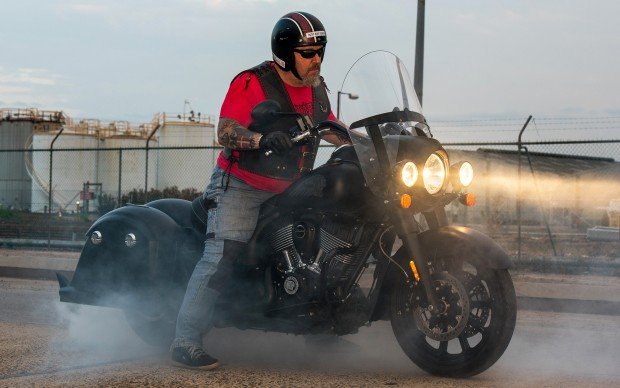 “Darkness does not leave us easily as we would hope.” ― Margaret Stohl

What it did not nail, and what I reckon it has to nail next, is some LED headlight stuff. It had driving lights, but it really needs some more lumens up front. White ones. Not those old yellow ones from last century.

The switchgear however is much improved – neater and more modern – but the overall vibe of simplicity and ease of use remains.

It’s also good to see the screen no longer vibrates like a mad thing. The early Perspex screens used to shake at the top edge from about 60 all the way through to a top end of about 170-odd. It was really annoying and I would always take the screen off if I was going anywhere substantial. So I was pleased the factory addressed this early design flaw. The improved screen sits just right for me (I’m six-feet tall), and I can look over it, or through it. And it’s certainly big enough to do its job.

And its job is cruising at a very respectable rate. Big twins are just so damn visceral at this. Certainly there are bikes that are faster and more agile and more adept at the whole big-mile touring thing.

But there are none cooler than the Springfield Dark Horse. There are none quite as thundery, and none with as much outlaw majesty as this night-dark Dillinger of a bike.

Each time I glanced down at that grandly finned headlight nacelle waaay up there in front of me, and I wriggled my big old arse on that big old leather seat, and I opened that throttle a touch more and felt the whole dark display of torquey might surge forward in a symphony of thunder, I’d smile like an idiot. 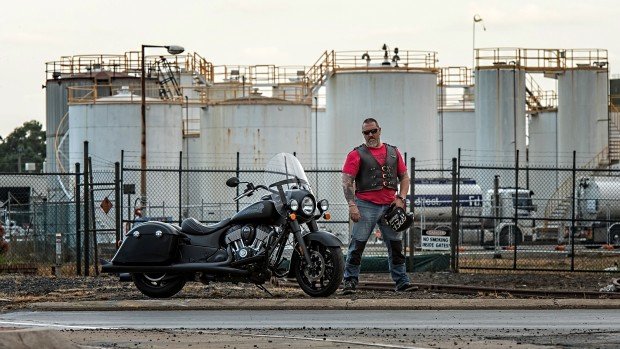 “How terrible this darkness was, how bewildering, and yet mysteriously beautiful!” ― Stefan Zweig, The Burning Secret and other stories

I couldn’t help it. I’m a simple one-celled creature and simple pleasures like this are what I live for.
And then I’d stop smiling because smiling on the Devil’s personal motorcycle is just not the done thing, don’t you know.

Well, not where anyone can see you, OK?

I will leave you with the words of the great Francis Bacon, Lord Chancellor of England, who knew the truth about the darkness.
“In order for the light to shine so brightly, the darkness must be present.”

Your darkness, sir, is right here, present and accounted for.

YOU MAY VIEW THE SPECS AND THE ACCESSORIES AND ALL THE OTHER INDIANS RIGHT HERE. 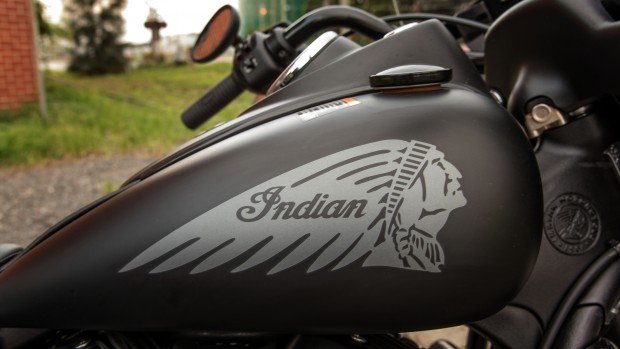 “Darkness approaches from outside. I feel no light inside me strong enough to resist it.” ― Christopher Pike, The Last Vampire

I know some of you will want to know how the Indians now compare to Harley’s new crop of Milwaukee 8 models, so I guess I’d better have an opinion on that.

There’s no denying the new 107- and 114-cubers from Harley are a huge step forward in Milwaukee’s evolution. And it is an evolution that had to happen, given how good Indian’s offerings were and are.

Interestingly, Indian’s current range does not give away all that much to the new Harleys. Harley may have nudged itself level, or even a touch ahead in terms of suspension and gearbox, and maybe the performance is a tad livelier (but Indian is offering a 116-cube version and I’m hanging to have a crack on one of them), but there really isn’t anything much in it today.

Two years ago, some of Indian’s offerings were substantially better than Harley’s. That gap is not there anymore. The two big Americans are neck and neck. Some of H-D’s jiggers are seriously superb. But then so are some of Indian’s.

It’s now truly a matter of personal preference rather than making a call based on superior engineering by one brand over another.

For the customer, there’s never been a better time to go shopping American style. Pick a side.