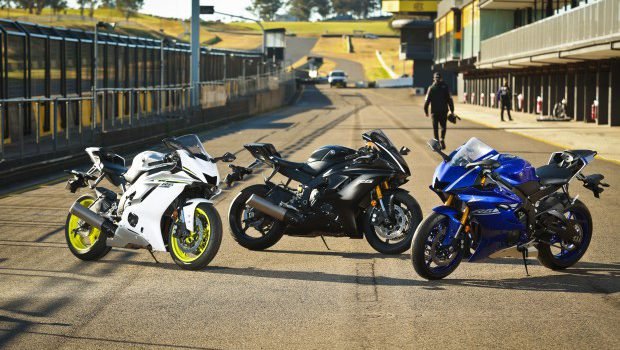 It would be entirely appropriate to pronounce ‘R6’ as ‘ARGHSEX’. In fact, I would insist on it.

If you cannot see this is one of the sexiest-looking sportsbikes ever made, then you are blind. The next R1 must immediately take its forthcoming styling cues from this baby, because this is the best-looking motorcycle Yamaha has made in a long time. 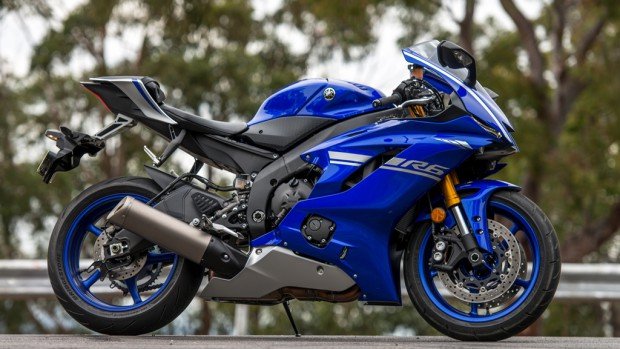 You just can’t say that isn’t pleasing to the eye. 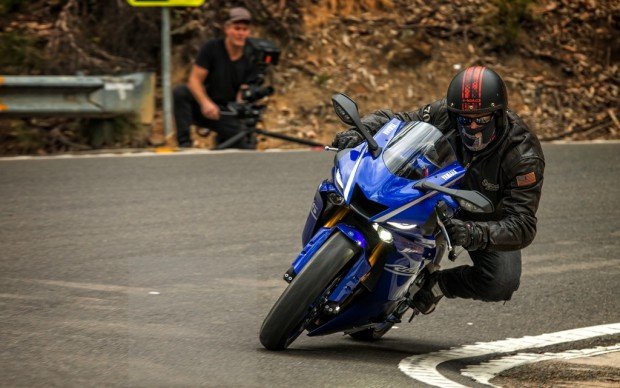 Me, on the other hand…not so much. 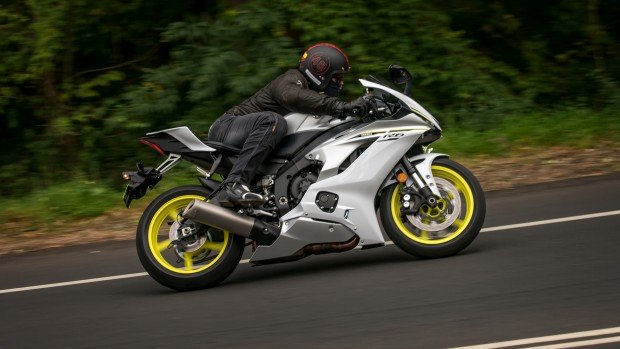 I will take questions early in the piece…

1.   Is that hyper-aggressive profile and come-get-some-baby stance all there is to the new R6?

2.   Is it just style with no substance?

3.   After all, it’s not like the supersport class is booming, is it?

4.   Why would Yamaha, or any manufacturer, bother all that much with it?

1.   No. Like any proper supersport there’s some two-stroke evil in its veins. There doesn’t seem to be much zest below say 9000rpm. It feels all fluffy and pleasant and not at all interested in showing you the face of the Baby Jesus. But wick it up over 9000rpm – in fact, if you’re doing it properly you’re redlining its 190kg (wet) in every gear (peak power is at 14,500rpm) – and whoa…there He is! The Baby Jesus. And He’s winking at you. 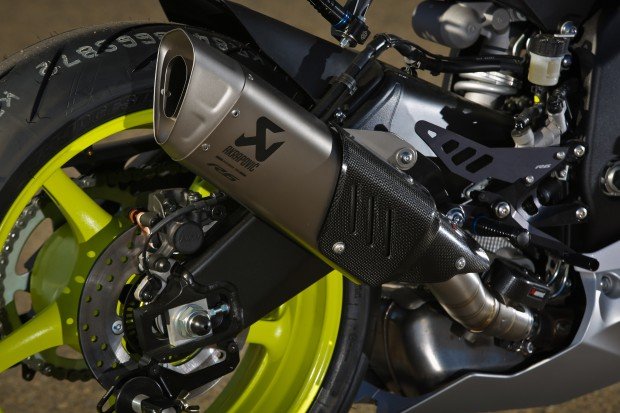 This one had a lovely Akrapovic on it. 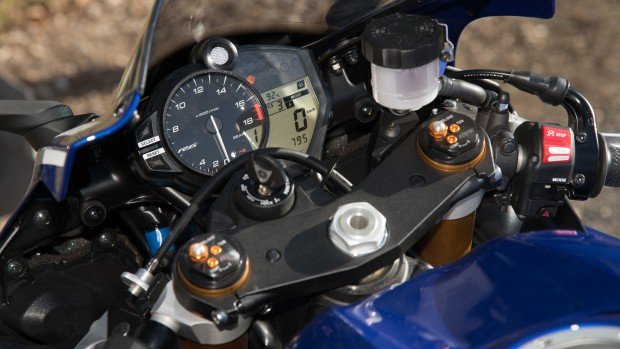 Look where the redline is. Yeeessss…. 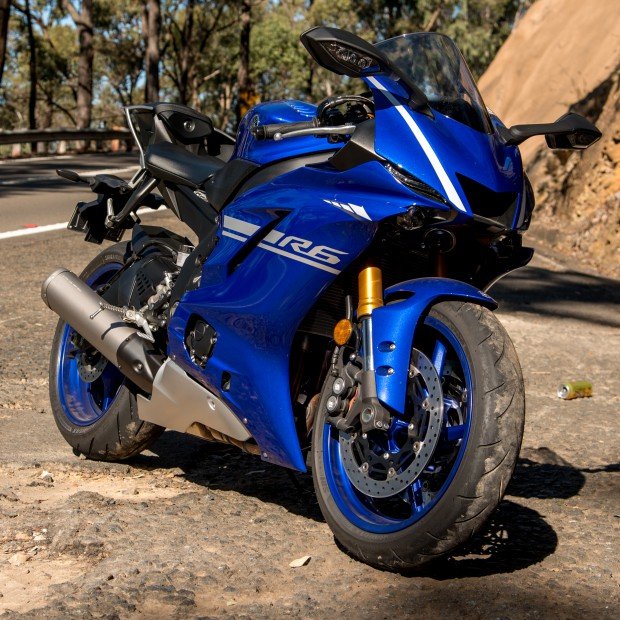 You can just drink beer and look at it.

2.   No. There is quite a lot of substance to this style. But then there always has been. There’s a reason why the R6 has dominated the supersport racing class all over the world for more than a decade. There have been no changes to the R6 since 2010 (and why would you change a bike that is winning everything anyway?), but for 2017, this is what’s changed – the magnesium subframe (20mm narrower at the front with a flatter seat, so even big blokes can now be a bit more comfortable), the fairing (allegedly 8 per cent more aerodynamic and easier to tuck in behind), the flywheel (lighter for a more two-stroke-like experience) and the suspension (it now has the fully adjustable 43mm front-end off the R1. Also off the R1 are the brakes, 320mm discs being squeezed by four-piston radial calipers), and a new dash. Other new stuff includes a smaller lithium battery, an R1-type swingarm, a more rigid front brake bracket, an ECU to match all the new electronics, sexier LED lights and LED blinkers, and a different-shaped wheel-hubs for better ABS braking. 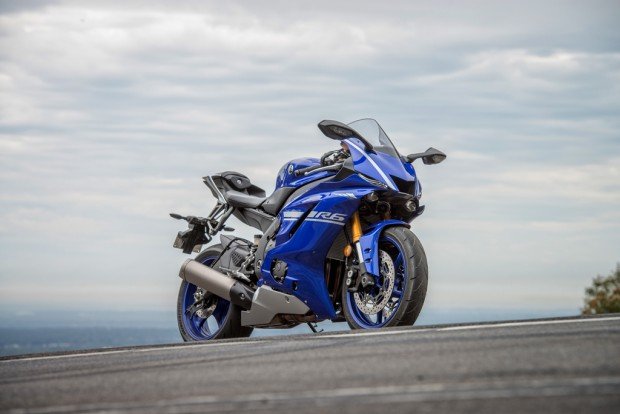 It climbed up here all by itself just to look down upon us all. 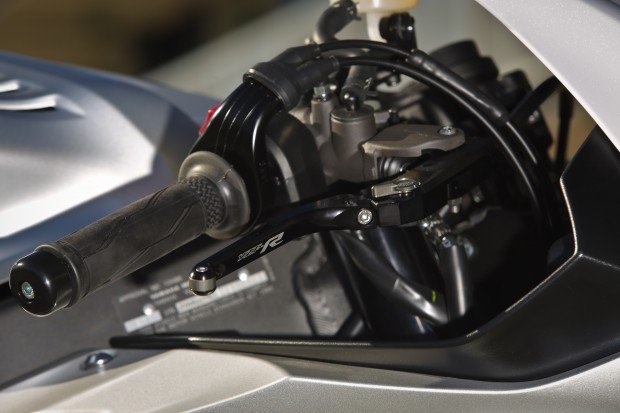 You turn the rubber thing and evil runs into those cables. 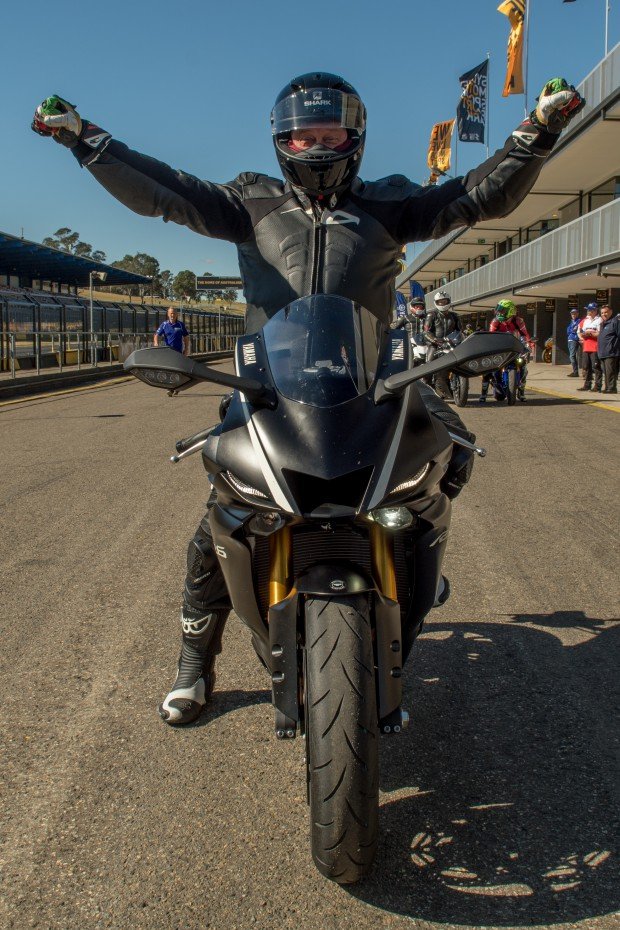 4.   Because it can and because it must. Don’t ever forget, there are a lot of mean-eyed motorcycle freaks in positions of power in motorcycle companies. And they very much relish telling bean-counters to piss off.

Of course, the R6 is very track-focused. I did spend a day riding it on the road, and it’s certainly a hoot in that regard. You’ll recall I’m the crazy person who did an Iron Butt ride on an R6 some years ago. So don’t tell me it can’t tour or commute. It can and it can be very fulfilling in that regard. But it’s happiest place is the track. That fantastic screaming, shrieking, howling motor. How can you not love that? Have you no soul?

Then there’s the crazy corner speeds, lightning-fast line changes, leg-checking cheeky bastards into the cabbages…none of which I did much of, but all of which is what happens when you unleash herds of feckless, wild-eyed youths onto a racetrack astride R6s. 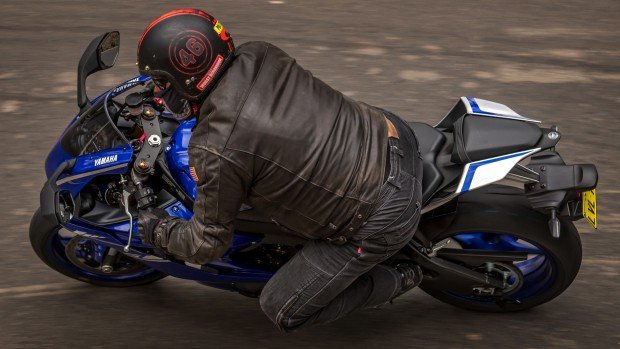 You can just imagine this being fired down the Corkscrew…and ending in a ball of flame. 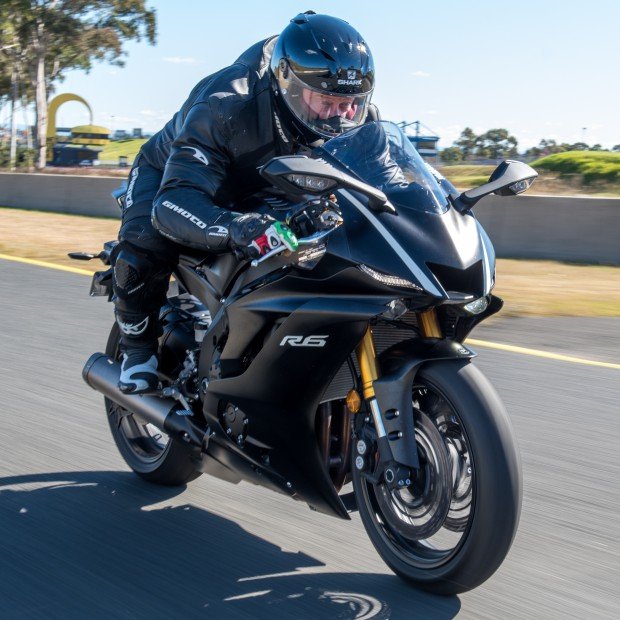 The black one is rather special.

But yes, I did spend a day hosing the R6 around Sydney Motorsport Park wishing I was 25 years younger and my balls were a few kilos heavier. If I was and they were, I would have gone much faster than I was going and I would have enjoyed seeing the Baby Jesus winking at me more than He did. But now and again, when I got it together, He did give me a bit of a grin.

So the press launch was a blast. I got some solid road time in, as well as a day at the track – which was damp in the morning so that gave me a chance to see if the R6’s electronic traction wizardry would keep me out of hospital. As you can see, it did.

To be perfectly honest, I did enjoy the R6 more on the track than I did on the road. If I was 20, I’m sure it would have been 50-50. So there is that to consider. The R6 is a young man’s game. I guess it always has been. 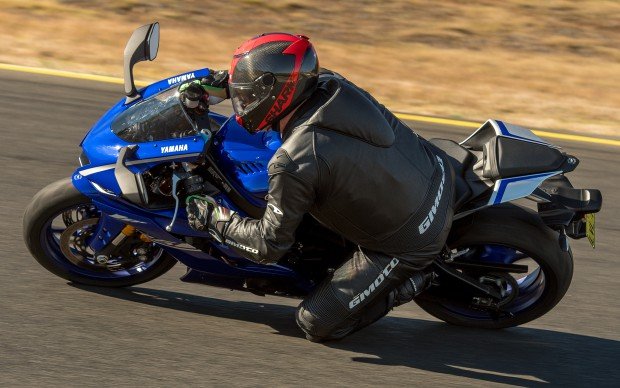 This could be you – but faster and slimmer. 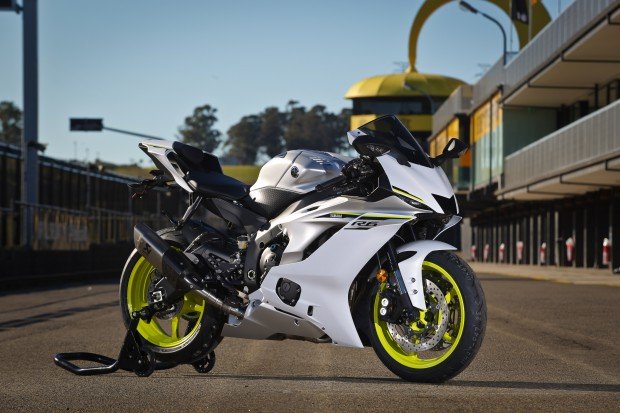 Picture it parked outside a tent in the Sahara.

That does not mean older blokes can’t or wouldn’t enjoy the shit out of it – hell, I did and I’m closer to 100 than I’d like to be – it’s just that while I’m happy putting in the supersport hard yards on a race-track and reaping the rewards, out on the road my brain just doesn’t work as quick as it should anymore. And while the 2017 R6 is marginally more comfy than the old R6, this comfort thing is a relative term. This is a supersport 600. Don’t lose sight of that, old people.

But if you’re 20…oh sweet Baby Jesus, if you’re 20, then you should get an R6 and wallow like a degenerate in the endless panty-shower that awaits you.

I showed my beloved wife images of the bike.

“How sexy is that?” I demanded.

“You need to lose some weight,” she said.

“It’s hard to see it under all that…um, man,” she shrugged.

She did as I asked and then nodded.

“Yes, that is a very sexy bike. And don’t even think about it. I will stab you in your sleep.”

When I went to sleep that night I dreamt of podiums, giggling grid-girls, and that jet-fighter-sounding engine.

And because I do not talk in my sleep, I did not wake up with a knife in my chest.

What colours does it come in?

Blue, black and white. The blue is Yamaha’s factory racing blue. It’s gorgeous, like the Caspian Sea at sunset. The black is matte black. It’s perfect. Thank you. The white? Well, that reminds me of a Bedouin sheikh’s white kufiyah. I am not the market that colour is looking for.

Yamaha very kindly provided the press with a single customised-for-racing R6 to try.

It boasted Öhlins (TTX up the back, FKR102 gas cartridge forks up the front, and a steering damper), Power Commander, fuel controller, blocked-off ABS, PC auto tuner, race-pattern quickshifter, GYTR 520-pitch race chain and sprockets (geared for Sydney Motorsport Park), Dunlop racing tyres, crash knobs, GB engine cases, etc. It was splendid and you can make your R6 look and perform exactly the same. Sadly I did not ride it, but by all accounts it was some next-level sorcery.

Why didn’t I ride it? Well, I was busy riding Daniel Falzon’s ASBK-spec R1 Superbike, so I had some next-level next-level stuff to be getting on with while the rest of the press stood in line for turns on the customised R6. 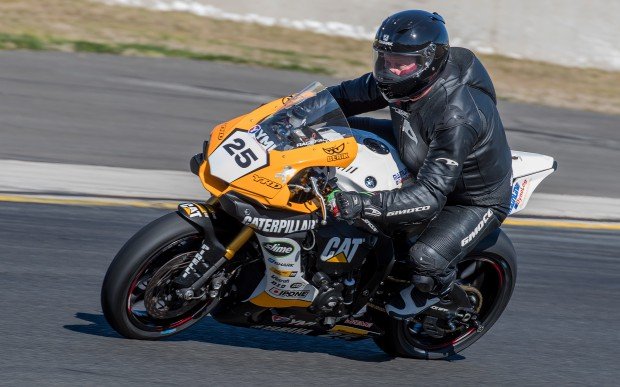 Wait until I tell you this story…