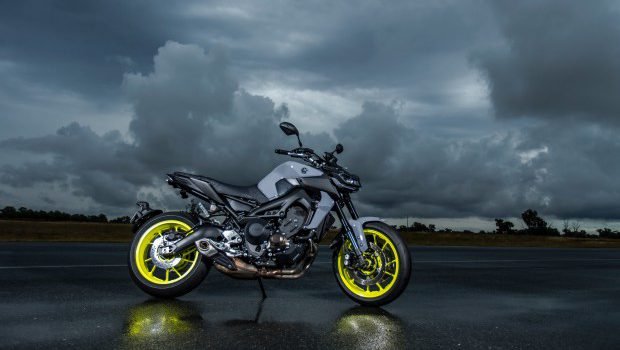 Ok, it’s time for me to come clean. I hate planes.

It’s not the flying. I love the acceleration of take-off, and getting served drinks by a stewardess in tight pants never gets old. However, the thought of plunging 20,000 feet to my death is a little off-putting and let’s face it, the Russians could do anything nowadays.

I wonder if the West is still blaming  them for MH370 as I board what has to be the smallest plane to operate out of Mascot Airport. Luckily I am seated next to an 85-year-old grandma with dodgy legs who tells me it will all be OK and holds my hand on the hour-long flight down to the NSW-Vic border. 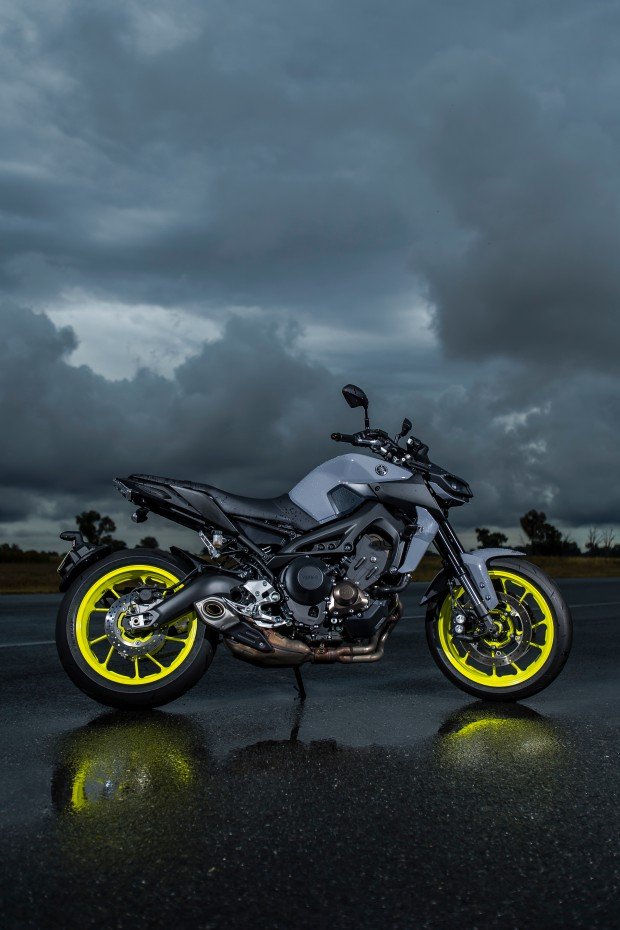 I am headed to Albury for the launch of the latest MT09 because Borrie is busy trying not to die at Phillip Island and can’t make it. I am his go-to guy when that happens. I love it when he uses me like that.

The sales figures of Yamaha’s MT range from the last few years are as surprising as the warmth of that granny’s hand. 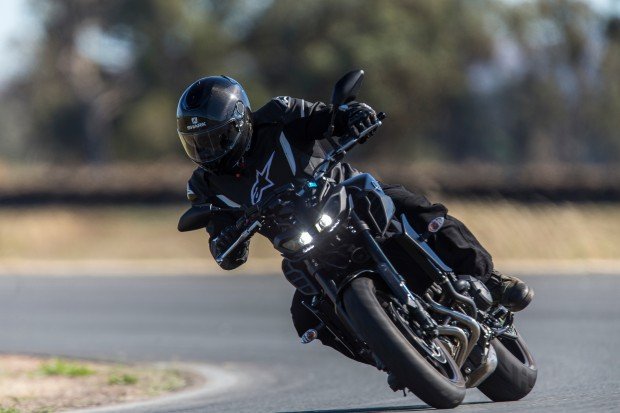 Daz brings all of the Daz there is to bring. 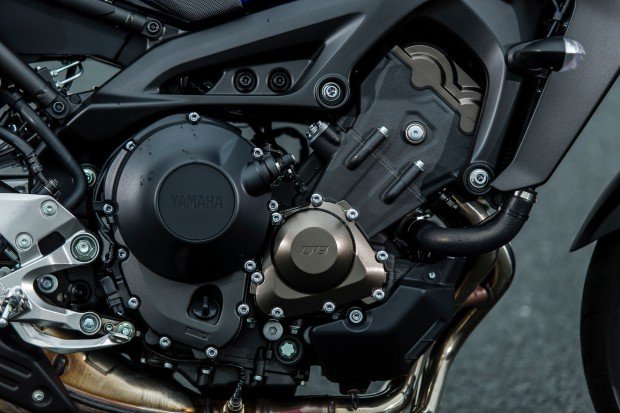 It is a lovely motor, both physically and spiritually. 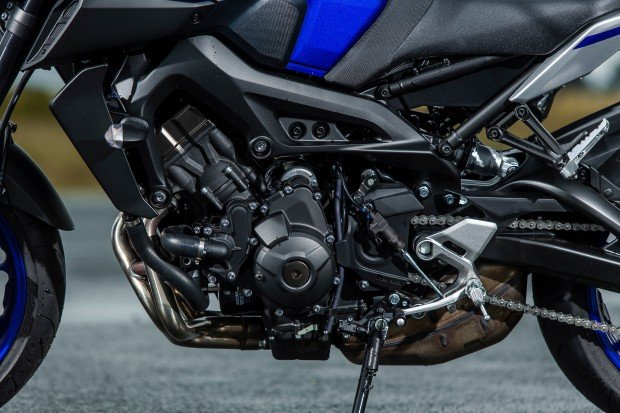 The quick-shifter now comes standard. And works best when you’re up it some.

Full credit to Yamaha who saw where the market was heading and worked hard to ensure it was positioned to take advantage of the trend.

That hard work has resulted in the acclaimed and hugely popular MT range or “Family” as Yamaha prefers to call it. 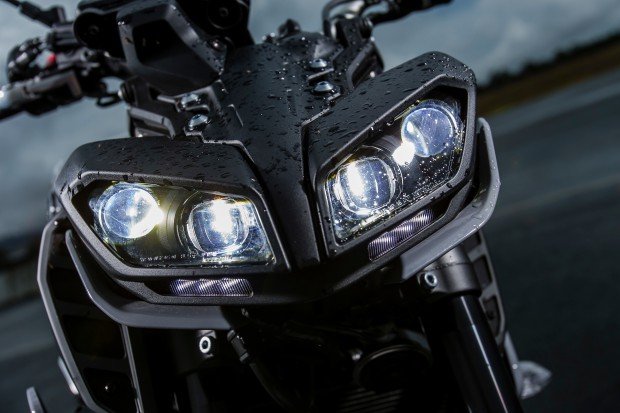 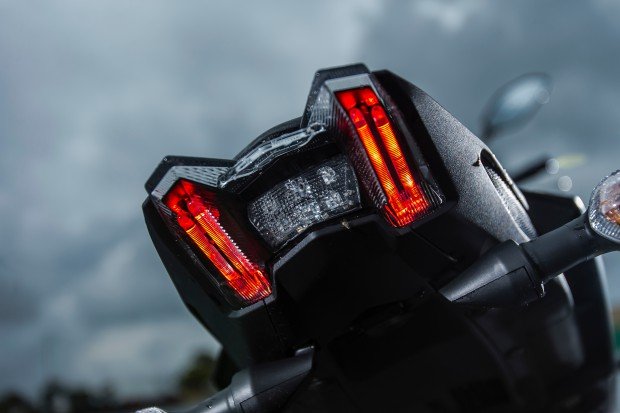 Yamaha is really punching hard in this market, and has loaded the 2017 model with a host of new features including a Quickshifter, Assist and Slipper clutch, an updated muffler, rear number plate holder, and updated lights and instruments. The 2017 model also boasts a higher-spec front suspension with rebound and compression adjustment in separate fork tubes which provides for greater adjustability.

And this is on top of the existing three-stage traction control, switchable engine maps and ABS brakes. It really is a whole lot of bike for not a lot of money when you compare it to the competition. You also get Yamaha reliability, dealer backup and long list of genuine accessories. Don’t like the new swing-arm mounted rear fender? Change it. Though I reckon it suits the bike well, as does the beaut-looking slash cut muffler. 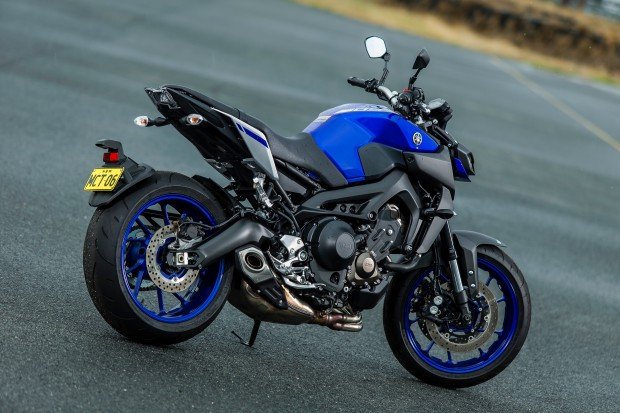 See? It is possible to have a pretty standard muffler. 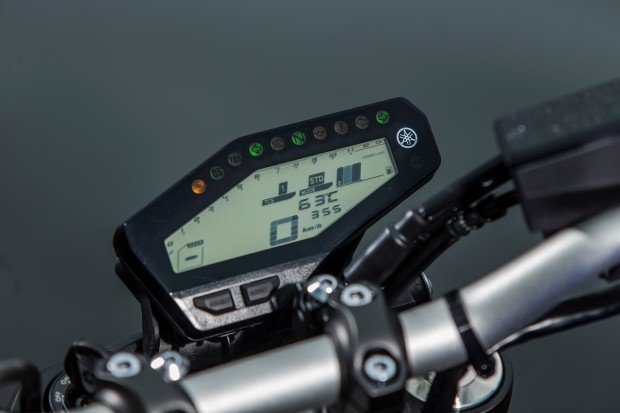 Zero km/h is not its happy place.

Note to all manufacturers. See? It’s not impossible to produce a standard exhaust system that looks great. Many of us buy bikes based on what we see in the showroom, and not what it will look like after we spend several thousand on aftermarket bits. I reckon I could fit an MT in the new Gixxer’s stock exhaust, but I digress.

How does it go?

It goes great. The fueling is spot on and it doesn’t hunt at all when doodling through traffic. It’s mild enough down low to keep you out of trouble but as the revs build it has a fantastic mid-range that’s really wide and rideable. On a lively belt through one of Victoria’s awesome mountain roads I think I only used 2nd and 3rd gear. It just loves to sit in the broad mid-range and rewards you for riding smoothly without needing to rev its tits off. There really is no need to rev it hard and whilst everyone loves a quick shifter (me included) you could argue it’s wasted on this motor. You just don’t need to change gears that often. Yamaha really nailed it with this three-cylinder engine. 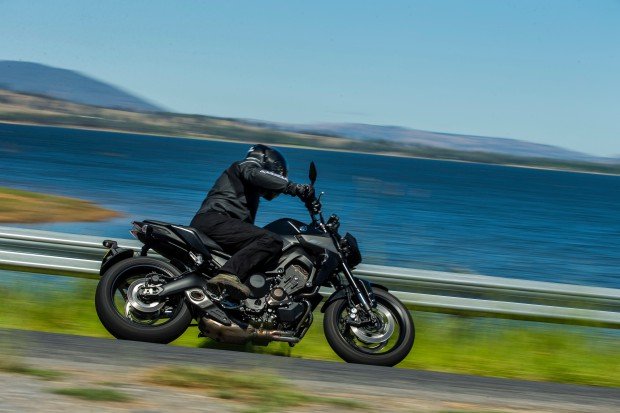 Daz refuses to get into the sea. 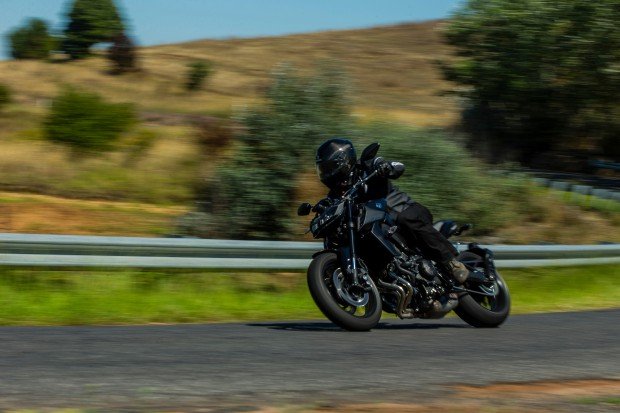 The MT09 handles well and is predictable under brakes. I was a bit ham-footed a few times riding the track Yamaha had booked for us on Day Two of the launch and the rear ABS copped a bit of a work out.

Riding at speed in the mountains the day before, I hit a fair-sized rock that had rolled onto the road. The bike just shook its head a bit and moved on.

I have owned and ridden a few naked bikes (Speed Triple and Superduke R) and like them the Yamaha can feel a little front-heavy when pushing hard through sweepers. Feedback from the front wheel is good with the higher-spec fork and the bike is very stable so at no time did I feel like the front was going to wash out.

The seat was long without a huge step to the pillion position which gives you plenty of room to move about on those inevitable transport sections any rider in Australia has to contend with. It carries 14L of fuel and Yamaha quote fuel consumption figures of 5.5l per 100km giving it a range of around 250km. That’s pretty good for a naked bike. I would leave the pillion pegs on as your Ducati riding mate will need someone to double him down to the servo. 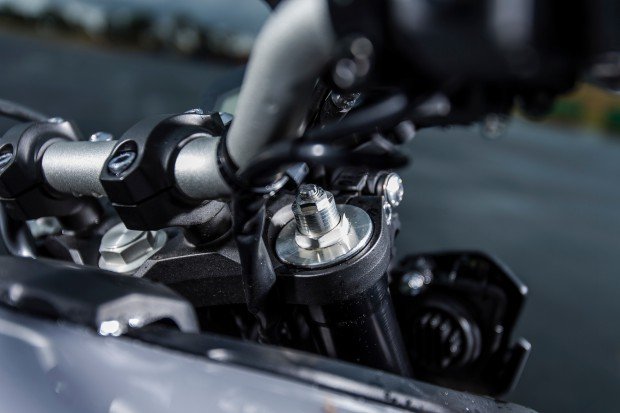 Turn everything to the right as far as it goes. Happy days.

There isn’t a lot not to like about the new MT09. There was a fair bit of heat coming off the left side of the motor and it was noticeable when stopped with the motor running. The test was smack bang in the middle of the massive run of hot weather Eastern Australia has been suffering so I guess I should allow for that. I also thought the indicator switch and horn buttons on the left switchblock were too close, so I ended up blowing the horn whenever I went to switch the blinkers on or off. I just waved at random people in the street when it happened. You meet the nicest riders on a Yamaha, aye?

If you love ripping killer monos you will love the MT09. I have never seen a bike ridden on the back wheel so much. Just drop it down a gear and clutch it up. Awesome! And monos are always cool. 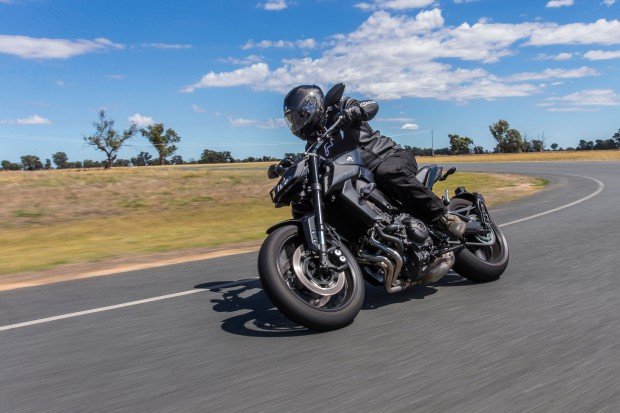 Trackdays are yours to rule.

You will either love or hate the colour schemes available. Opinion was divided among the testers, with many saying they preferred the Night Fluoro or Race Blue over the Black. But black is always better and I was cheering to be handed the keys to one as my ride for the two days.

I kept comparing it to my current ride, a Superduke 1290. One of my more experienced colleagues pointed out the price difference and helped put it in perspective. KTMs are twice the price and you can do a hell of a lot with the $13k change. You could bling the hell out of the MT, set it up exactly how you like it and still have enough change for another new bike. Hmmm, perhaps I could buy one of those WR’s I near killed myself on last year…

Yamaha has developed the MT range to cover the needs of all riders as they progress through the ranks – from the MT03, the amazingly popular MT07, the tested MT09 and through to the fire-breathing apex predator MT10 SP.

It’s the kind of nudist colony you’re not gonna feel weird at.

I’m one of the blokes clapping each time Yamaha puts one through the goal of the ongoing Naked Bike championship.

And like Darren, I’m also of the view the new MT-09 is a whole lot of motorcycle for not a lot of money.

I picked up a blue one a few days after the press fleet was returned to the tender care of Yamaha HQ, and have been riding it daily for the last three weeks.

So I have different perspective to Darren, who spent two days fanging around the Aussie alps in the standard press corps pissing contest. 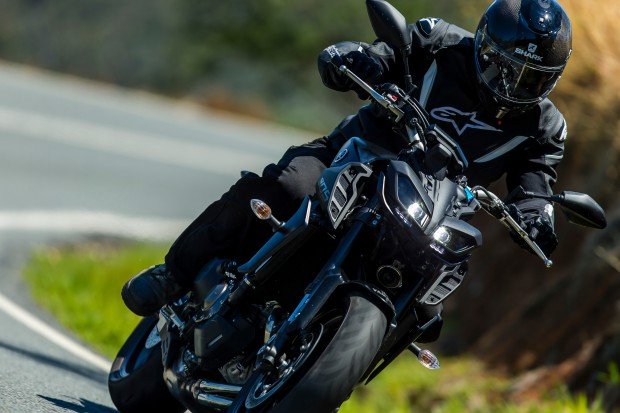 This is not me. It’s Daz. I have yet to acquire the skill of photographing myself riding a bike.

I found the new MT-09 a bit different to the previous model. It certainly looks different. Some 30mm has been sliced off the rear end and the new headlight arrangement is all minimalist sex-manga alien. And who would have thought so many lumens can come out of such small headlights? Not me. But I do a fair bit of night-time riding and the headlights are excellent – white light thrown wide and far.

The off-set dash is also new, but very readable and modern. The switchblocks are smaller, and I like Darren, I also found myself snagging the horn button instead of the blinker. But then your brain reprograms itself and it’s fine.

And while I don’t mind the look of the numberplate holder/rear-mudguard thing that comes off the swingarm, please understand that when you ride the MT-09 in the rain, this styling-call will direct all of the water from your rear-tyre onto your back. It is very refreshing.

One other thing that did gnaw on me some was the seat, which is a bit higher on this year’s model.

“Did the seat give you any grief?” I asked.

“It’s pushing me forward into the tank and impinging on my vegetables,” I lamented.

Which could well be the case. But I would struggle to do big touring miles on the saddle.

The riding position is all aggression. It almost feels like a motard, which is not a bad thing, because there is a lot of hooligan in the MT-09.

That motor and its power delivery is perfectly suited for doing bad things on empty roads, pausing only to listen if the sirens are getting closer. The mid-range stomps like an angry skinhead with bloodlaced Doc Martens.

All three of the engine maps hand over the same 84.6kw at 10,000rpm and 87.5Nm at 8500rpm. They just do it a little differently. I was happier in B mode around town and on my own. It’s just a more mellow throttle response coming out of tight corners. If there’s a podium at stake, choose A mode. And Rain mode is Rain mode. The ABS cannot be turned off, but the traction control can…um, because podiums.

The handling is impeccable, but it does require you to pay attention if you up the pace. It steers pretty quick and can properly be described as a ‘lively’ motorcycle, which makes it a bend-skewering delight.

It will shame bikes twice its price. And I reckon that’s the thing I find most endearing about the whole MT range and the MT-09 in particular.

You don’t have to spend the world to get the world. 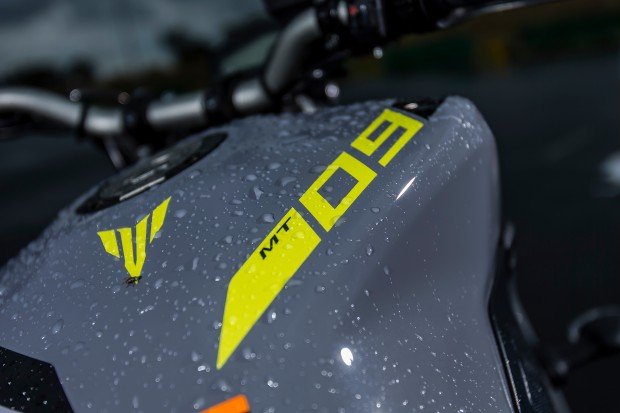 Here is one we pre-moistened earlier.

Goodies available from HERE.
More info can be found HERE.