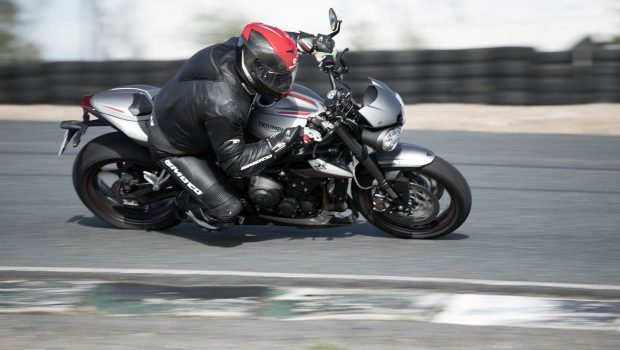 It’s hard not to applaud Triumph at the moment. Every new model the marque has launched in the last two years has been a quantum improvement over the previous one. This cannot be an easy thing to pull off given Triumph is playing in a variety of niches.

But it does pull it off and the new Street Triple 765 range simply proves that.

There was quite a lot of social media hype preceding its arrival. The term “game-changer” was used so often it started to lose its power. Calling something a “game-changer” is a big call. Especially in the hugely competitive mid-sized naked street-banger market – which almost sounds like an exciting side-street in Thailand, doesn’t it? 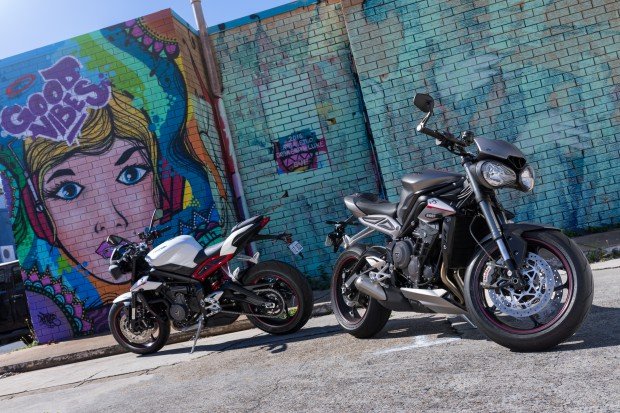 The RS (right) comes with a bellypan. 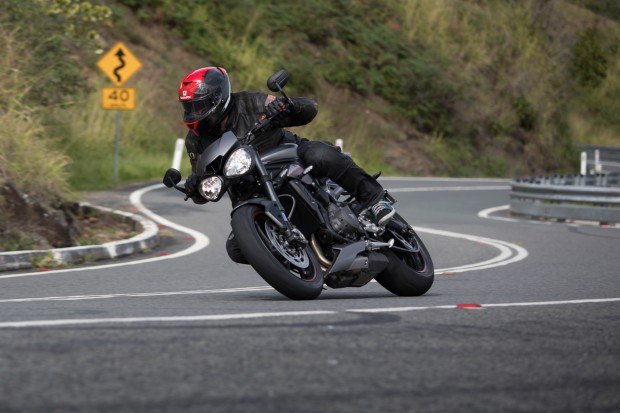 Pretty much to match the bellypan I carry myself. 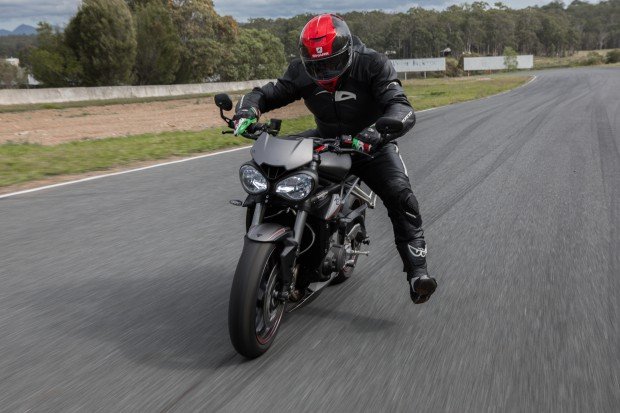 That leg out stuff they do in MotoGP? Yeah, nah…

Anyway, this is where MV’s Dragster lives. This is where Yamaha’s MT-07 and MT-09 abide and rule. Ducati’s little Monster is here as well, as is KTM’s wicked 690 Duke R and SMC R. And let us not forget Suzuki’s enticingly priced and hugely able GSX-S750.

Just sitting down at this poker game and putting your cards on the table takes some balls.

But Triumph has always had balls. Large English ones with manly heft to them.

No idea. The game among the torquey mid-sized nakeds does not need changing. It needs refining, and in that respect, Triumph has succeeded beyond my wildest expectations. 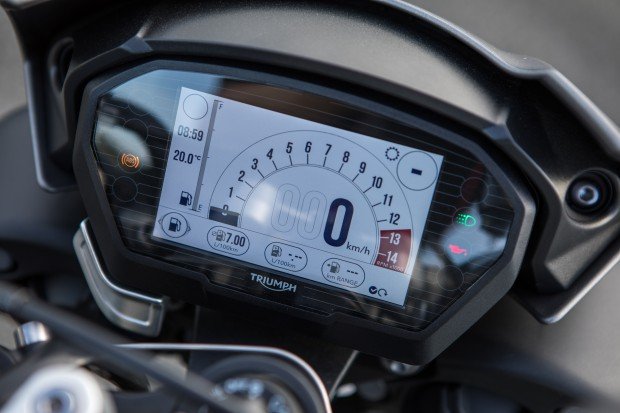 How trick is this? 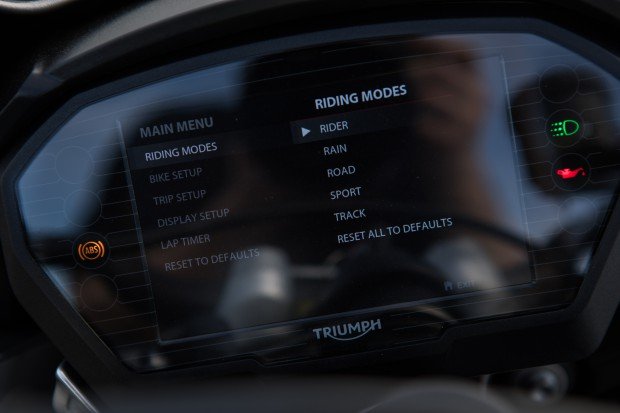 Simple to read, easy to use. 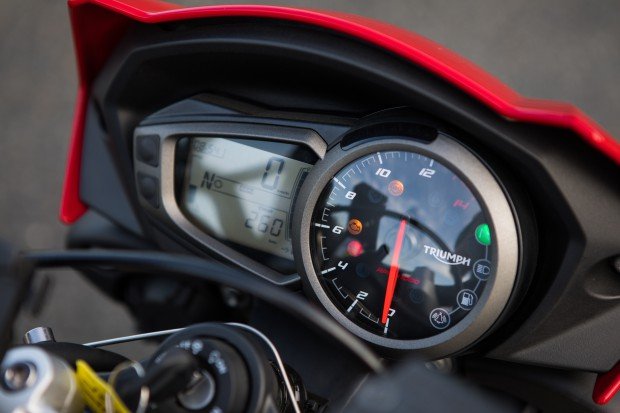 Old faithful for the S model.

You see, I have a confession to make. I was never a fan of the 675. I didn’t like its first faired incarnation (the Daytona), and I was an island in my indifference to the ensuing Street Triples. Motorcycle journos raved about them. This only reinforced my indifference to the Street Triple. I loved the bigger Speed Triple to bits, and there was no room in my heart for the smaller, buzzier, and to my mind, Speed-Triple-pretendier Street Triple.
And it is with this mindset I arrived at the Aussie press launch of the 2017 incarnation of a bike I didn’t much care about.

I left two days later with a totally opposite mindset. What Triumph has done to the new Street Triple is brilliant.

And, because the platform is sound, it has injected this brilliance into three different iterations – or four, if you count the LAM-spec 660, which I didn’t ride because I ran out of time, and happy thoughts, and I was at a racetrack, and I didn’t want to ride a LAM at a racetrack, and it was hot, and I had had too much sugar, and I had a plane to catch, and like any of you really care. I didn’t ride it. Build a bridge. I rode the others, and they were superb. 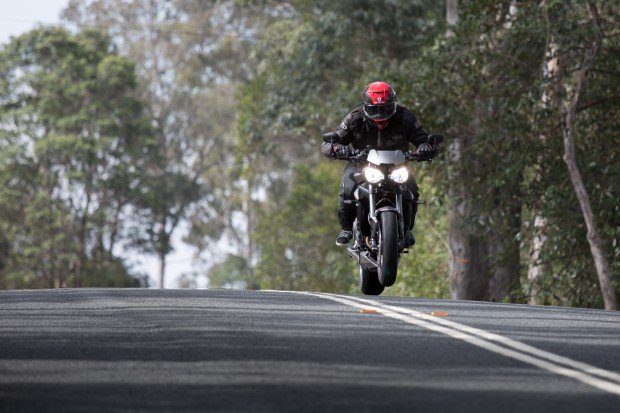 Everyone else did massive wheelies over this rise. I just shat myself. 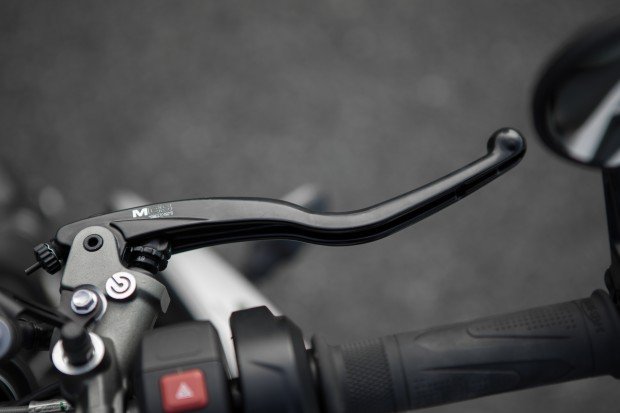 Look at this sexy goodness on the RS. 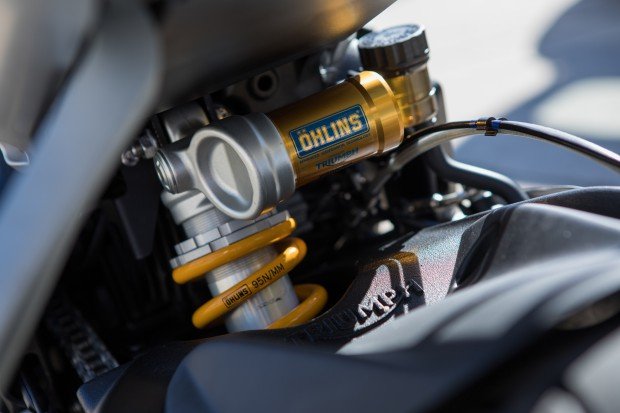 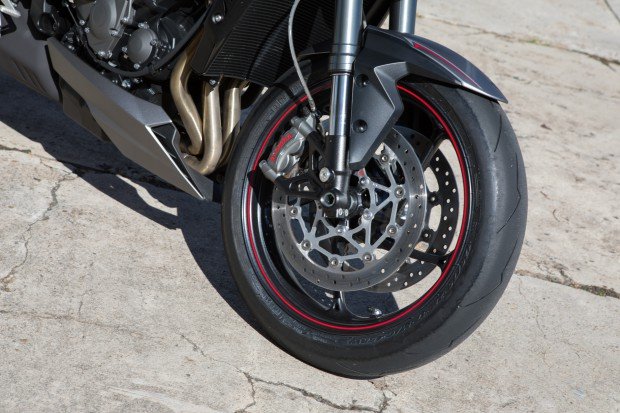 There are more than 80 new Euro 4-homologated engine components in the new donk, the capacity of which has been increased via 78mm in the bore (up from 74mm) and 53.4mm in the stroke (up from 52.3mm). The high-volume exhaust system is new as is the bigger induction system. The gearbox has been improved for a slicker change, and the first two gears are shorter, and of course there is an up-only quickshifter standard on the RS, but it can be fitted to the S and the R.

All three 765 models have a unique power and torque curve. The RS boasts 90Kw and 77Nm, the R has 87Kw and 77Nm, and the S has 83Kw and 73Nm, much like the model it is replacing. Interestingly, the R provides a smoother and more lineal power delivery than the RS, and because it’s smoother, it feels like it’s accelerating faster. Some testers preferred the R over the RS, but for mine, the RS just offered an edgier and more exciting ride, and its equipment level was the deal-closer for the money. 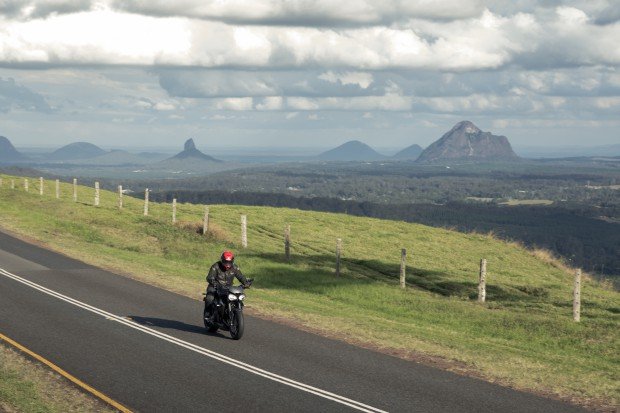 Nice part of the world. 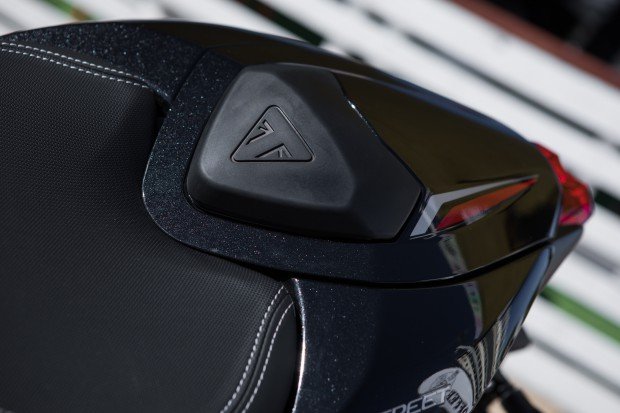 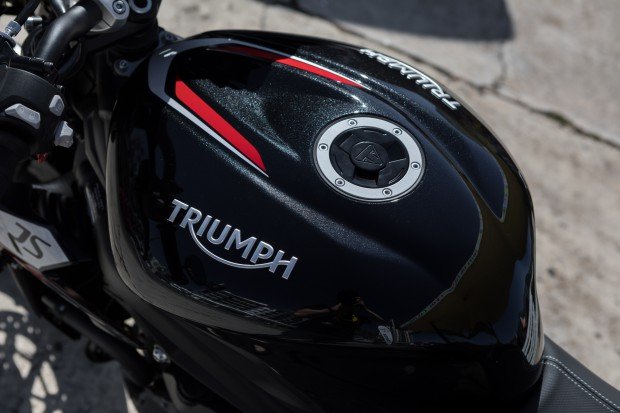 Metalflake black, red and silver – to die for. 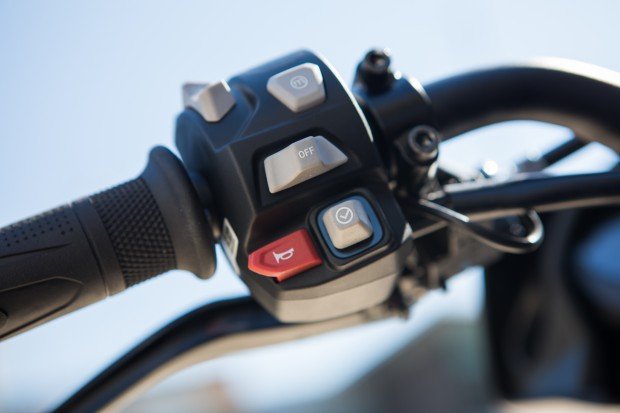 The S kicks on with the old dash, but both the RS and the R get the coolest TFT dash on any bike currently on sale. Six different configurations are possible on the RS dash, and three on the R. It’s an all-colour, all-singing and all-dancing extravaganza. Easy to read, and easy to scroll through via a five-way thumb-stick on the left switchblock. It really is a visual feast.

All three models have ride modes – but just like the varying equipment levels and torque curves, they vary from model to model. The S has Rain and Road. The R gives you Rain, Road, Sport and the programmable-to-your-needs (ABS, traction control, and power) Rider mode. The RS has all of those and then adds a Track setting for those special days. All of this can be adjusted on the fly except the Rider mode which requires you to stop so the ABS can sort itself out.

The bikes are certainly loaded to the gunwales with tech – fly-by-wire, CAN (Control Area Network) protocols, and clever switch-cubes running a LIN (Local Interconnect Network) system. This is the future of all motorcycles. Accept it and move on.

I normally stare at a spot on the ceiling when these wonders are being revealed to us in the press briefing. And because I do that, I’m the bloke on the side of the road mashing buttons until I achieve an enjoyable and workable assortment of settings, and then off I go. Certainly, there are anoraks who will adore all this tech stuff, and then there will be people like me who will find one mode and use it all the time except when it’s raining and we remember to put it in Rain mode. Or not. 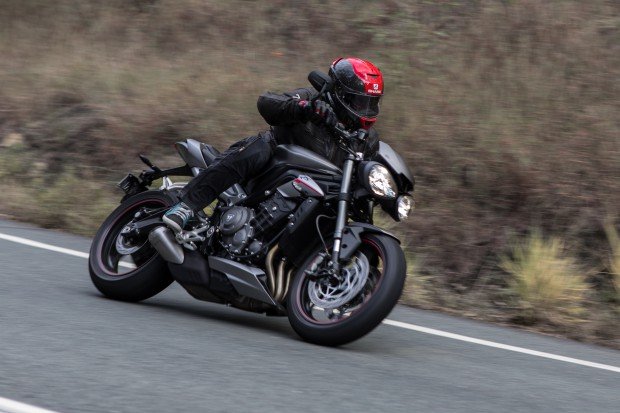 It really is a good-looking thing. And so is the bike. 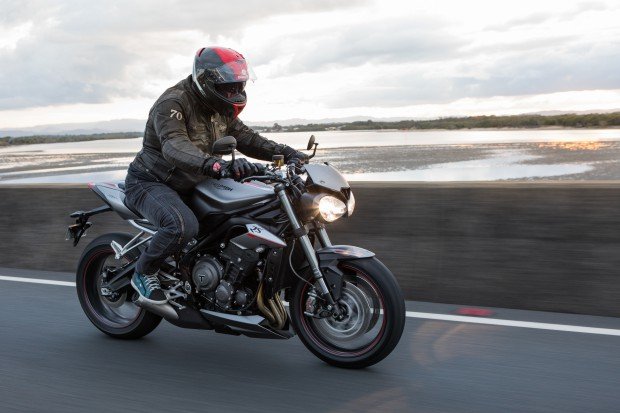 So romantic. Not me. The sunset.

So what else is new and exciting?

The brakes. They’re all different too. The S has Nissin two-piston jobbies up front. The R has Brembo M4.32s, and the RS has something very special pulling you off…erm, up. Brembo M50 calipers being fed by a ratio-adjustable master cylinder. Want more aggressive racing brakes? Make it 21. Want something a little more road-focused? Choose 19. Or pick 20.

The RS also boasts Öhlins over the R’s Showa unit, but for reasons I cannot grasp, the Öhlins felt a touch saggy thanks to a softer spring being fitted. The bigger, harder-riding chiefs found themselves winding the rear right down to get some stiffness into it when we adjourned to Lakeside for some salty laps.

Not me. But then when I rode the R, I realised what a difference there was. On the road, I enjoyed the RS more. But on the track the R felt more settled and precise.

And if you know anything about the Lakeside Park racetrack, then you’ll know that “settled and precise” is by far the most preferred way of riding it. Lord, that is one scary racetrack. But because it is scary and redolent with history, it is a lot of fun to ride – especially on a motorcycle as engaging as the Street Triple. Belting around some of southern Queensland’s finest backroads is all well and good – but hammering the Street Triple around Lakeside is next-level fun. This is where the bike really came into its own. The Bus Stop, Karousel and Hungry Corner – I had heard of them and now I got to ride them, and it was just sensational. Sure, there were sections of the surface which proved…erm, interesting, but on general principles it is a great track, but one which you will treat with respect or pay the price. 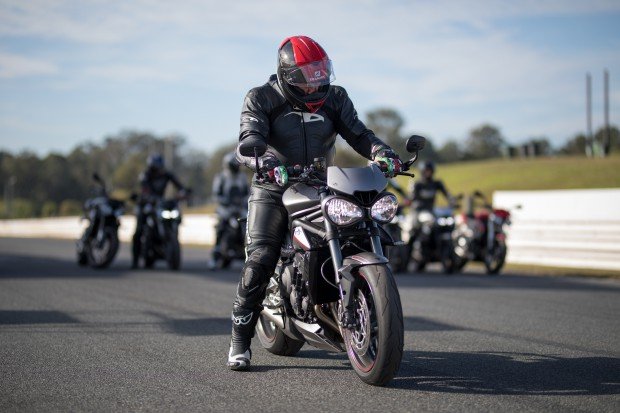 Yeah, like a head-start is gonna make a difference. 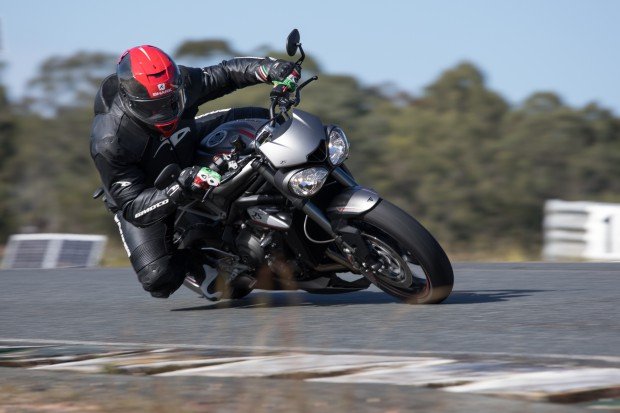 At the end of the day I had to admit the new Street Triple had made a believer of me. It’s level of finish is really outstanding and like I said, each new model Triumph releases is an order of magnitude better than the one it replaces.

I found the Street Triple to be agile and precise in hard cornering, and much more settled than the previous model. The increase in capacity and the commensurate increase in bang is hugely appreciated and appreciable, and transforms the bike from its previous “Um…er…meh…” feel to something that really hoists its cags around the place like it means business – and it sounds like it means business, too. It’s faster, sharper, and edgier. The whole package feels more rigid and predictable at speed and in quick changes of direction. It’s more refined, smoother and better-appointed, and the small styling changes (check out the new ‘gullwing’ swingarm) and cues (love the bellypan on the RS), mean the Street Triple can now sit at the high rollers table and play cards with the big boys in this class.

Triumph certainly deserves a pat on the back for yet another…well, triumph.

Hinckley appears to be on a roll. Long may that be the case. 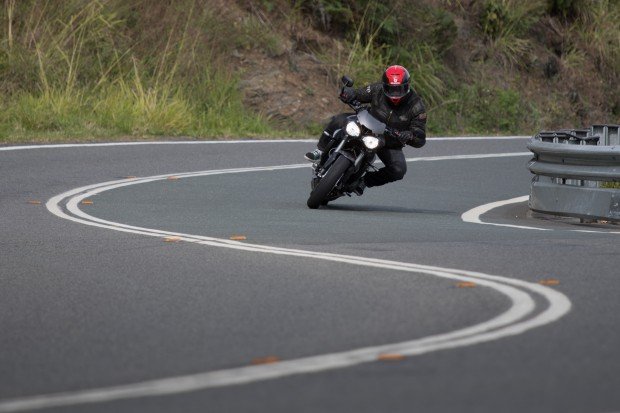 I think it’s called Mt Glorious for a reason.

SPECS AND MORE INFO CAN BE FOUND HERE

My thanks to OZMC leathers for the Gimoto race suit – nothing else even comes close. See more HERE.

The Shark lid I won in the tipping contest is wonderful. You can buy them everywhere or go to Ficeda HERE for your nearest dealer.

I am also rocking RHOK jeans on the road. Comfy and slimming. See more HERE.