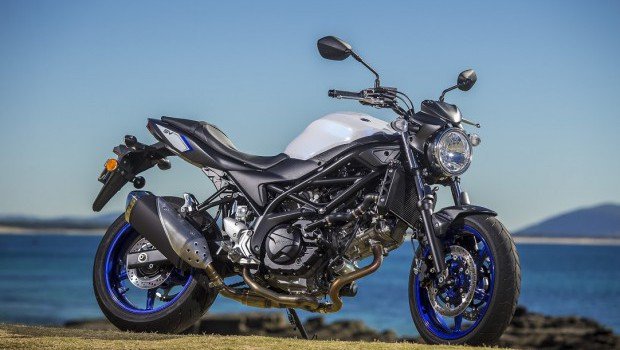 “Don’t crash the bike. Or sell it. Or set it on fire. Or I will beat you like a slave and turn your guts into snakes.”

There’s never any ambiguity with Boris. He could not make the press launch of the 2017 Suzuki SV650, so he sent me and told me how it was going to roll.

“Be nice. Be polite. Remember you’re a guest. Do not shame me.”

Thus instructed, I was on my way to the rolling green hills of Queensland’s Sunshine Coast hinterland. 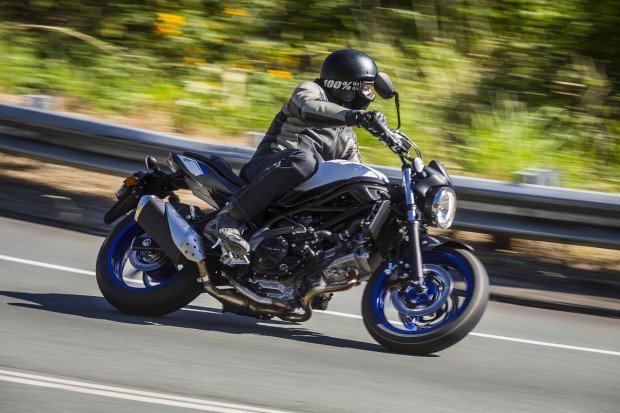 “I can’t believe it’s not raining.” 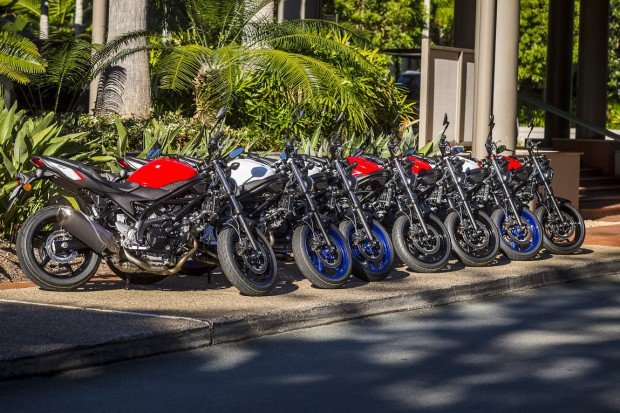 It’s like the KFC out the back of Ben’s place. But with palm trees. 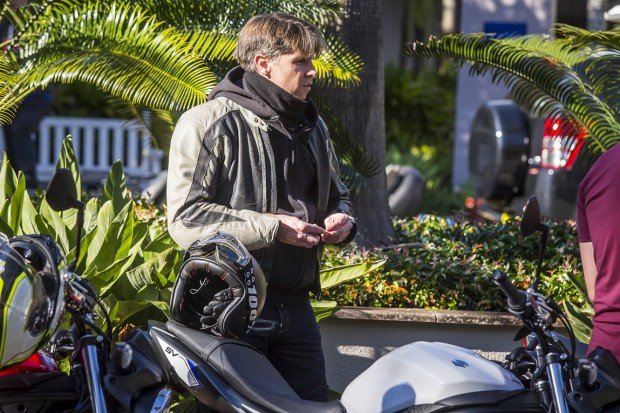 “Oh good. They’re all going to go very fast again. Well, not all of them.”

Which was marvellous because Sydney was getting a good belting of weather by some horrible Mexican bastard call El Niño, and I was glad to be shut of the joint.

Now I didn’t start riding motorcycles because I was hot in the pants for a LAMs bike. I wanted a big Japanese superbike or a thundering Ducati, but I had to settle for the quickest, sportiest bike the government would let me ride at the time, which was a Kawasaki ZZR250 with non-event looks and a parallel twin donk offering an aural ode to Rudolph Diesel.

So while awaiting the redemption offered by a full license, all I could do was dream of selling the ZZR and getting a proper bike. 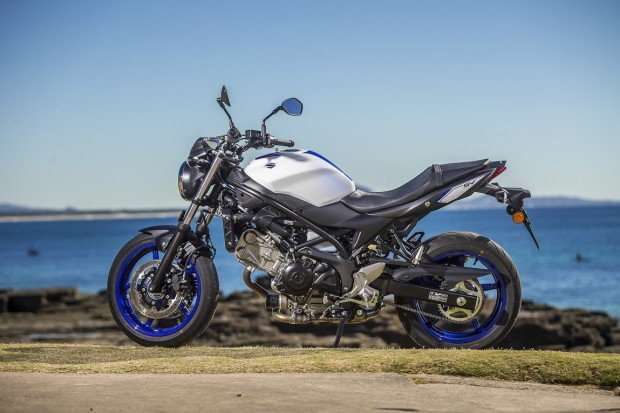 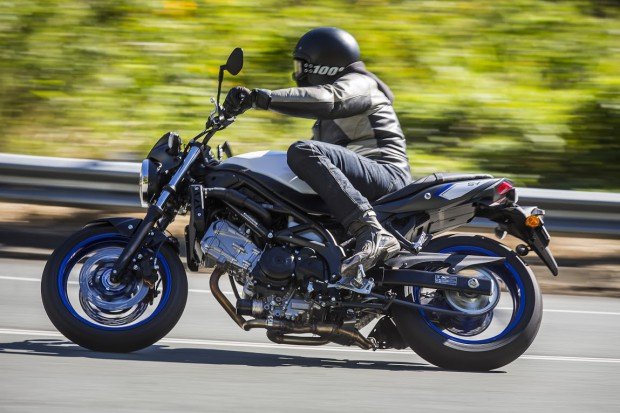 Times have changed. Choosing your LAMs bike in 2016 doesn’t have to be like choosing which sexually transmitted disease you have to live with for the next 18 months. There are a lot of very good and some rather great LAMs jiggers, and you can now pick a bike you may actually want to ride.

A traditional round headlight now compliments the light, clean lines of the new SV650. It’s an immeasurable improvement over the previous model Gladius with is vagina-esque headlight that made people look at you suspiciously when you rode it. And I reckon the numbers back me up on this. Suzuki’s LAMs market share in 2015 was trifling 0.8 per cent.

The new SV650 is up against the Yamaha MT-07, Kawasaki ER-6N, Honda’s CB650F, Triumph’s Street Triple 660 and the Ducati Scrambler. All of these bikes possess a modicum of style (Except for the ER-6N. That thing is just wrong) and quite a bit of ability. 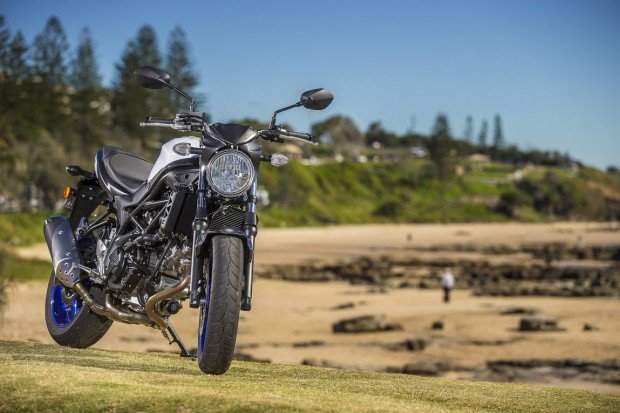 All that’s missing is a picnic blanket and a cask of goon. 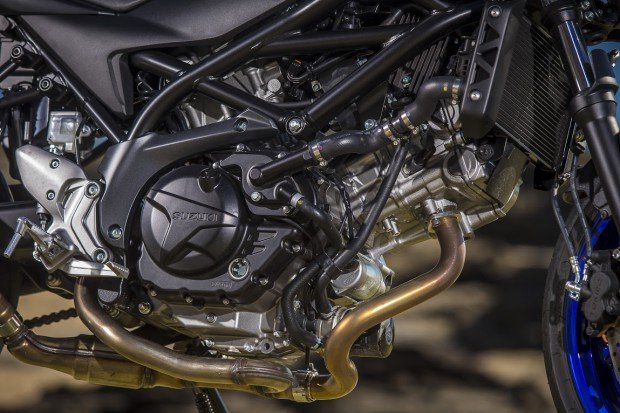 The wonderfully-built and classic engine. 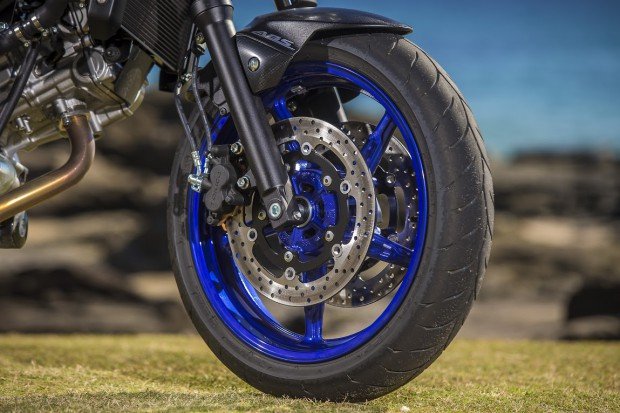 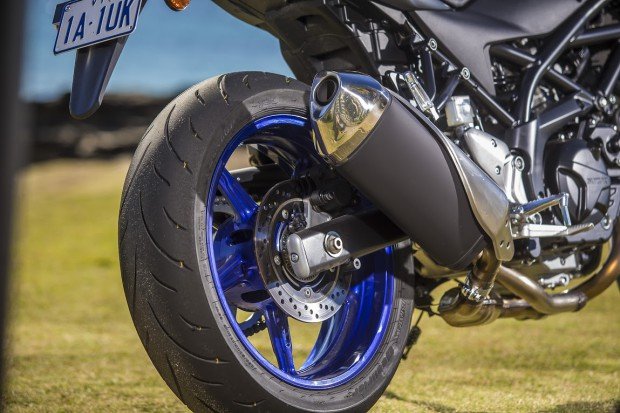 Great rubber for doing mad skids with, and that tubular black thing can be made better by taking a hammer and smashing a length of steel rod into its guts. Just kidding. Don’t do that. Seriously. Don’t.

I threw my leg over the new SV650 and immediately began to ask myself questions which only a rookie bike reviewer would ask. I was also well aware that if Borrie said he’d turn my guts into snakes, then it is exactly what he would do. He is nothing if not commited to his promises.

What if it’s a shit bike?

Do I lie about it not being a shit bike?

A few hours later I had my answers.

No. Borrie told me not to lie.

With over 80 changed or redesigned components it’s fair to say the 2017 SV650 is more than just a simple re-styling. 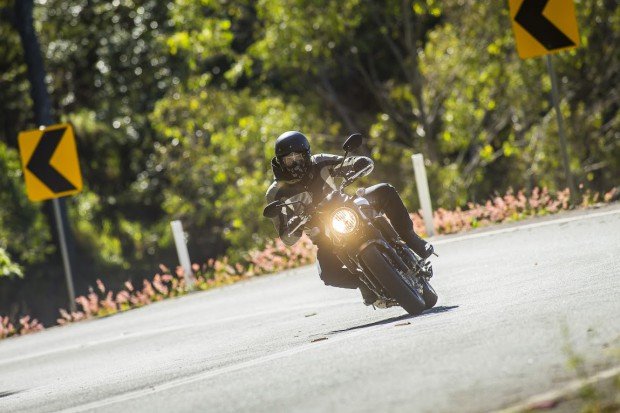 “They all have their knee down…” 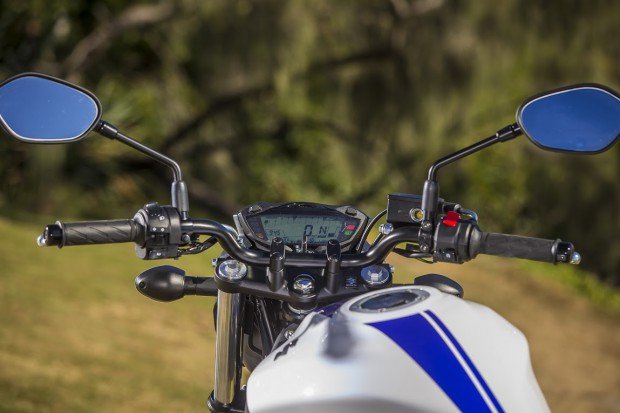 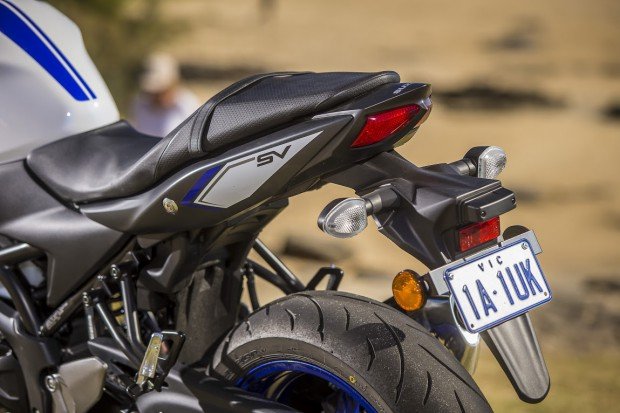 It’s not like you’re allowed to take pillions anyway.

But it has been re-styled, and it is rather handsome.

Colours, you may have it in Pearl Mira Red, Pearl Glacier White or Metallic Matte Black. Personally, I don’t mind the white with the blue wheels; in the sunshine the white exhibits a subtle blue pearlescent hue along its edges.

The beating heart is a DOHC, liquid cooled, 645cc 90-degree V-twin. In typical Suzuki tradition, the engine is magnificent. So much so it’s sold over 410,000 units across the platform including the Gladius and the DL650 V-Strom.

And important thing to note if you’re a Learner is that it’s a V-twin. So even if you’re still unsure which glove to put on first, you’ll at least know that V-twins sound good. 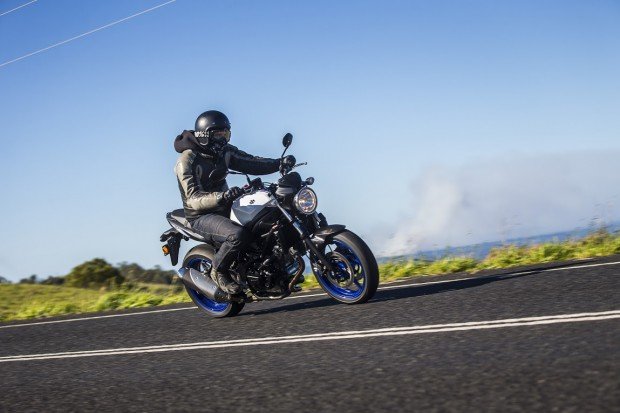 Something is burning out at sea.

The SV produces a rich growl from under the tank via inductionated air being drawn into the throttle bodies; a sound that can only be enjoyed by the rider. It sings its song for you alone. Add some cans if you want others to hear the music.

But that’s okay, because part of getting your first bike is messing about with it. Personalise it, make it yours. Put some LEDs on it and share your journey of bolt-on bling with your ragged crew in the KFC car park behind my house every Wednesday night!

Rev the tits off it, do some hot laps around the block. It’s all part of the learning experience and hopefully the new SV will add some variety to the customary droning of valve-bouncing parallel twins and the buzzing of CBR250RR’s on those evenings.

So apart from looking and sounding pretty good, the SV650 also rides rather well. Peak power is restricted, though a fat-ish 56.5Nm of torque is still there to demand a response from low-rev throttle inputs. Roll-on is pretty decent too, but forward planning is required for overtaking. That’s just how it is on a LAMS bike; they do run out of puff up top.

The gearbox is perfect, that’s all I got on that. It’s another Suzuki attribute. 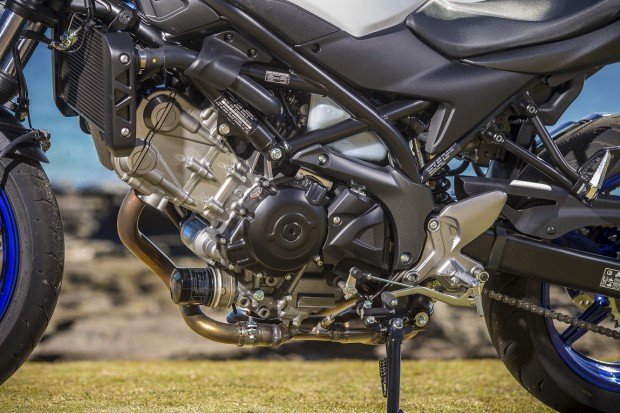 There’s also a new feature Suzuki call Low RPM Assist. Essentially the revs rise a little when you let the clutch out, so you can take off without using any throttle. Brilliant for the gumbies, but I imagine it’s also good for consistently smooth take-offs and peddling between tight spots in traffic. It’s subtle so you’d probably miss it if you didn’t know it was there.

Two other things to note if you’re starting out. The SV has the lowest seat heat in its class (at 785mm, with the MT-07 and ER-6N sitting tall at 805mm), and it’s also the narrowest as well. Which is really handy if you’ve over-estimated just how much space you have to lane-filter – even though you’re not allowed to lane-filter – and committed. 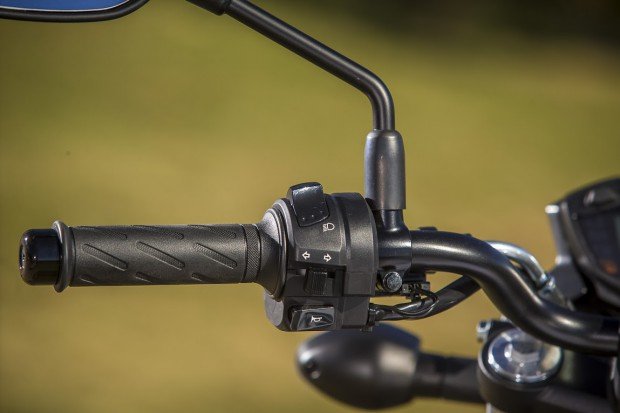 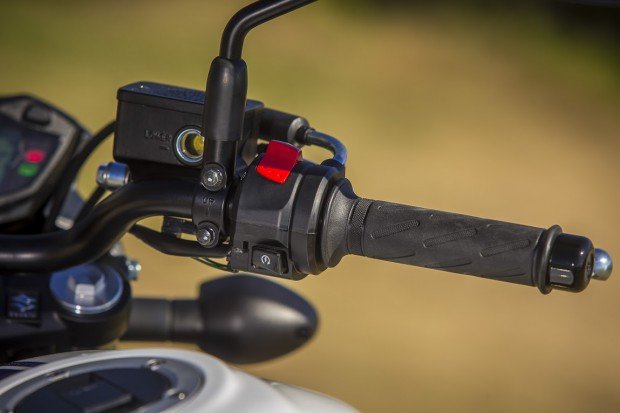 …you don’t need any more.

My 188cm, 87kg frame managed to fit okay, though it was a little tight in the knee. Tight, but not restricted; a factor to consider for the loftier among you. You’ll be cartwheeling with joy if you’re short of leg.

With non-adjustable 41mm right-way-up forks, it handled better than I expected. The rear-spring has adjustable pre-load but I felt no need to fiddle. I’m guessing the average learning motorcyclist is more focused on not smashing into oncoming traffic and suicidal trees than the technicalities of suspension settings.

As the press corps approached Mt Mee’s twisties, the pace picked up somewhat [I did warn you about those bastards – Borrie], and I found the SV hooked in quite well. It’s so narrow and feels very light flicking it from side to side.

The suspension did its job with no major wobbles or displays of unruly behaviour. I was grateful, since the previous day’s weather that was currently glassing Sydney in the face had deposited debris all over the roadside. Tree bark, leaves and murderous sticks covered the entire road and you could see the wheel-tracks of cars that had driven through it all.

The Dunlop Qualifiers the SV wears were a nice surprise. They handled the variable conditions rather well and it’s great to see such good rubber on a LAMS bike.

The twin 290mm floating disc brakes with twin-pistons were right for the bike’s lightweight and offered all the feel a hamfisted beginner might want. A redesigned, compact and lighter ABS is now standard. I would’ve loved that option as a young’un, only because I know what it feels to grab too much brake too hard. 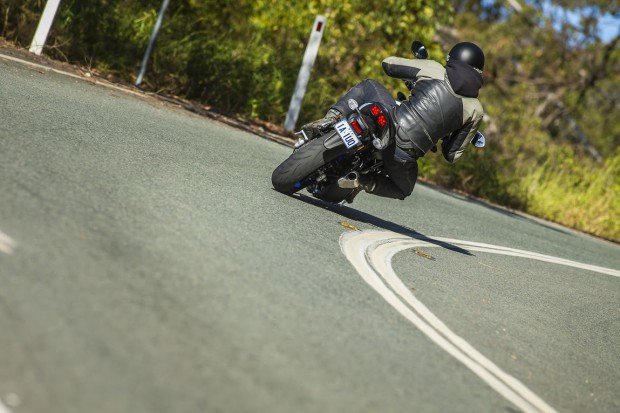 What you want to be showing to all your slower mates.

The multifunction digital dash reads easy and only has two buttons. Pleasantly simple with everything you need to know displayed and easily read.

Overall the new SV650 is five kg lighter than the outgoing Gladius and is whole lot better looking too. The engine is a classic and a half decent pipe will allow it to sing an exquisite song of bass happiness.

With its narrow profile, light handling and punchy motor the 2017 SV650 will be a blast in traffic. But it’s also great fun in the hills, so that’s two important boxes ticked.

At our last stop for the day I was looking and smiling in pleasure at the little SV, rather than just wanting to give it back and forget about it.

That’s a good thing coming from a fully licenced rider.

Sure, its’ no ZZR250, but you should be thankful for that.

YOU MAY SEE MORE HERE