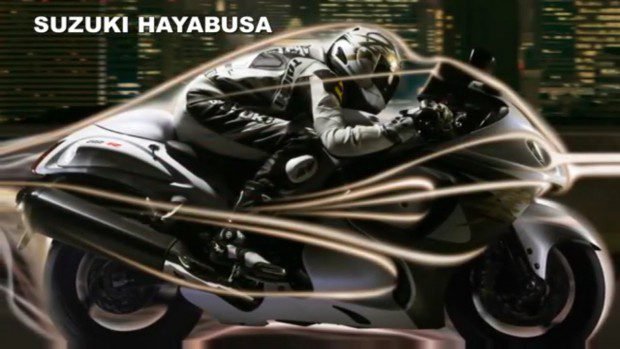 “My day has been too long. In the morning I saw the sons of the Unamis happy and strong; and yet, before the sun has come, have I lived to see the
last warrior of the wise race of the Mohicans.”
― James Fenimore Cooper, The Last of the Mohicans 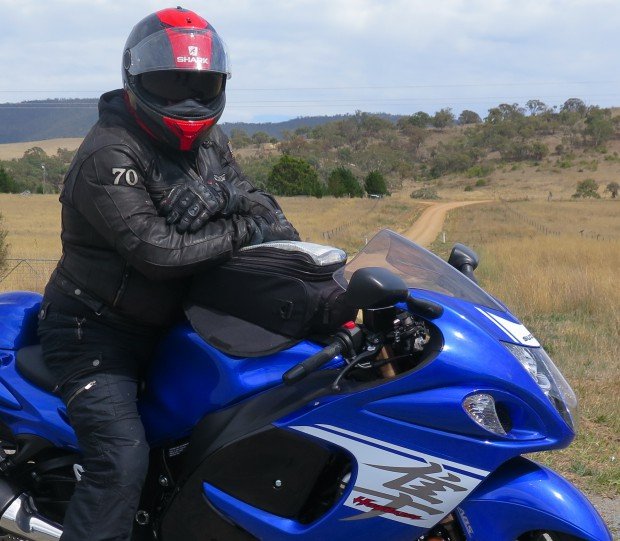 The Tumby TT was serious. I even wore a full-face helmet.

I forget things sometimes. Especially things about motorcycles. I ride a lot of them and each is its own unique sunbeam.

Nearly all of these two-wheeled sunbeams boast an array of computerised frippery – all of which is breathtaking in its ability to assist you in your riding endeavours. It is wonderful and helpful and all those things your mother wanted to you to be when you were growing up.

And then there is the Hayabusa – a motorcycle that stands apart from the electronically-assisted glam-bang missiles caringly forging a new reality for motorcyclists everywhere.

It stands over there.

And it stands alone.

And it cares not one whit for all them fancy-shmancy six-axial-plane, seven-traction-controlled bangers.
All those modes. All those buttons. And all designed to help Daddy not plough his motorcycle into the pumpkins when he exceeds his allotted skill-levels.

Not at all a bad thing – though it’s not something the 2017 Hayabusa is involved with.

And this is why I love it.

But I had forgotten this.

No, seriously. I had forgotten, just like so many people had forgotten what a stunning motorcycle the ’Busa is and was, and who for reasons I cannot understand, now pray for the arrival of the Gen III. 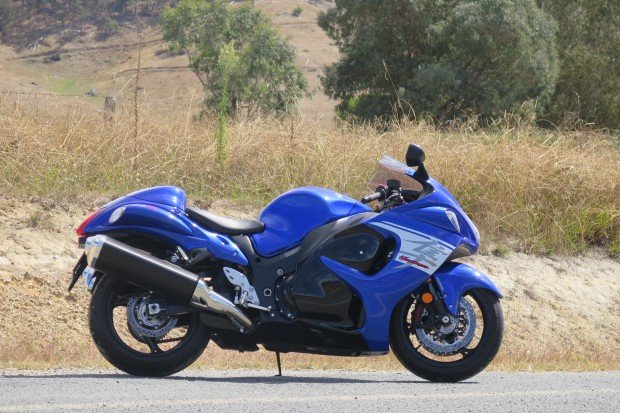 To my mind, the 2017 Gen II, the last of the old school rock’n’rollers, is a staggeringly brilliant motorcycle at a price that beggars belief.

But like I said, I had forgotten all this and had been swimming in a sea of electronically enhanced marvels for ages.

It did not take too long for my memory to be jogged. Well, not so much jogged as kicked in the bollocks and then glassed in the neck. 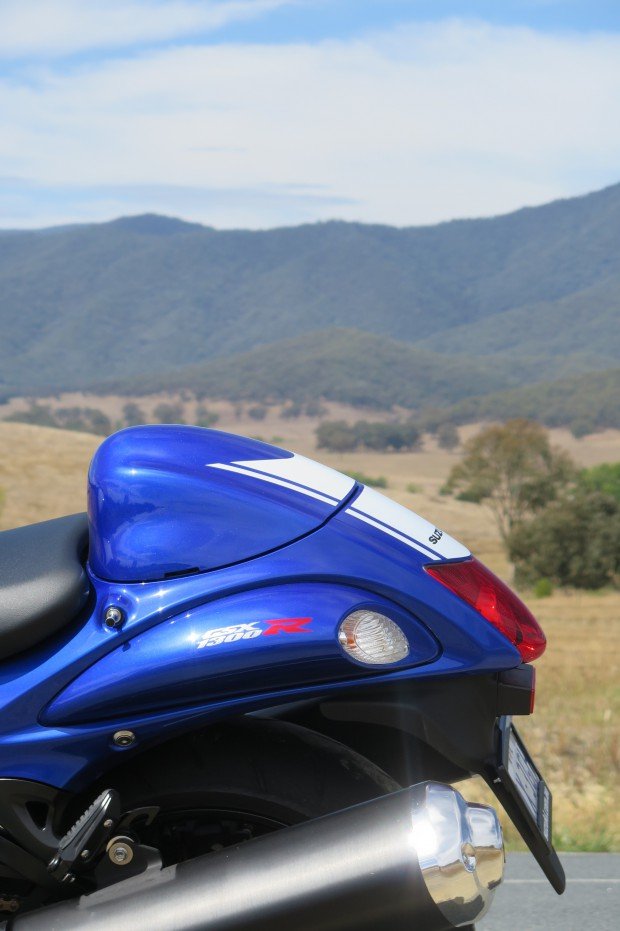 You can take that hump off and put a seat there. Which is good for when you strap stuff to the bike. Or you can buy a Ventura rack.

“Holy Mother of God!” I remembered breathing, as that impossible engine started frying its biscuits…

This is as near as dammit to 200bhp and 139Nm of torque – and that torque is as wide and meaty as a steroid-filled ox. Put it in sixth, idle around at 2200rpm all day. Then just twist the throttle and sing your hymns. Or change down a couple of gears. The result is the same. It just happens with more aggression.

I took it to the Tumburumba TT and did really bad stuff on it. I hosed cutting-edge Ducatis at crazy speeds on the fast sweepers of the Snowy Mountains Highway, then they gapped me a little in the real tight stuff and caused me to want to burn my tank-bag which was screwing epically with my kung-fu.

I then rode it from Tumby to Thredbo in third gear just for shits and giggles and then rode it back to Tumby using the rest of the ‘box. Just as fast. Just as enjoyable and just as stupid-exciting. The only thing that will beat it is a litre-sportsbike ridden by someone who actually knows that they’re doing. 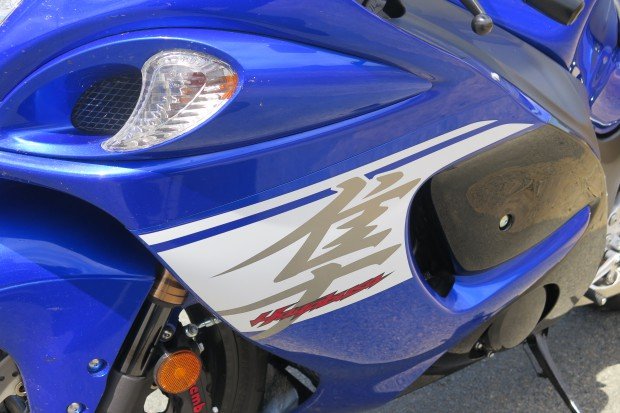 Yes, ram-air just inside where the blinkers are. You can’t hear it, but.

Everyone and everything else is second.

Back when it was first conceived it was the fastest production bike in the world, and back then it was only jizzing out about 160-odd horsies. We were all dancing around like idiots and laughing at it because it was painted brown and looked weird…but when we rode it, we saw the Face of God.

Suzuki doesn’t paint them brown anymore, but the Face of God is now always there for you to see.

Oddly enough, whenever the Hayabusa is brought up in polite company, the inevitable criticisms begin – and are all from people who have never actually ridden one, but have formed their opinions from reading tosh some fool pseudo-journo has stated at some stage.

So let me deal with that garbage…

Garbage One: “It’s too heavy and fat.”

Your mother is too heavy and fat. So is your girlfriend. The Hayabusa is exactly the weight it should be, which is 266kg wet. If it was any lighter it wouldn’t do what it does so well and maintain its demonic stability at insane speeds.

It cannot be “too heavy”. It is not a barbell with 266kgs on it you will never squat. That is “too heavy”. The Hayabusa is perfectly weighted and balanced.

The seat-height is 805mm, so dwarves and freaks cannot ride it. Spot on. It’s 2190mm in length with a wheelbase of 1480mm, so it’s the exact length it should be when you pull out to pass a Monster 1200S at 250-plus. And it’s 735mm wide, so it lane-splits superbly well. It is a substantial motorcycle and supreme value per kilo for what you’re getting. 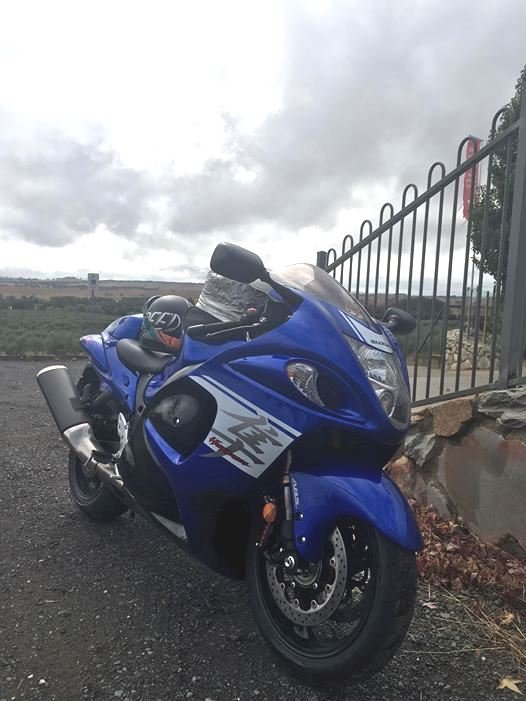 Once again, your mother is ugly. The Haybusa is not remotely ugly. It is iconic in its looks. It is unique in its mien. It’s a lot of things, and not one of them is “ugly”. Kim Kardashian’s step-she-daddy is ugly. War is ugly. A dropped pie is ugly. The Hayabusa is not ugly. Not even when they painted it brown was it ugly…though it did sail close to the wind.

Look at it like this, if a primitive cannibal from the jungle who had never seen a motorcycle before would be shown a Hayabusa he would instantly know, without any terms of reference, that it is something designed to go fast. No, it’s not ugly. Not at all.

Come on. Seriously? No-one in their right mind can call the ’Busa “slow”. It is a fully weaponised monster. Always has been. 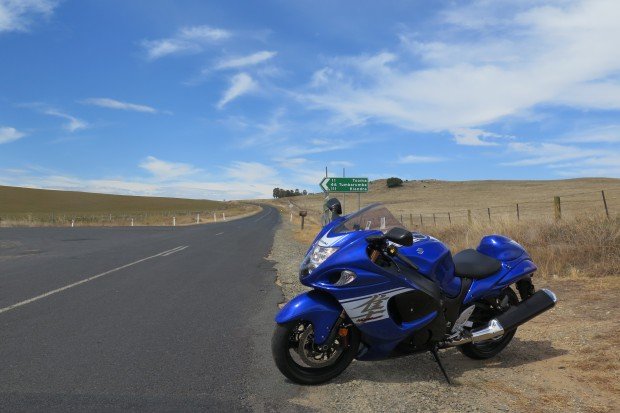 On the firing range.

Garbage Four: “It doesn’t handle very well.”
No. You just can’t ride it very well. Stop blaming your tools. The Hayabusa handles brilliantly. It is precise, steady, planted and responsive. It’s not all tetchy and ADD like a sportsbike or a 600. It is majestic and incredibly capable. And what you might think it lacks in terms of sheer racetrack cornering ability and death-late braking, it more than makes up for by rocketing out of corners like a punch to your sassy face. 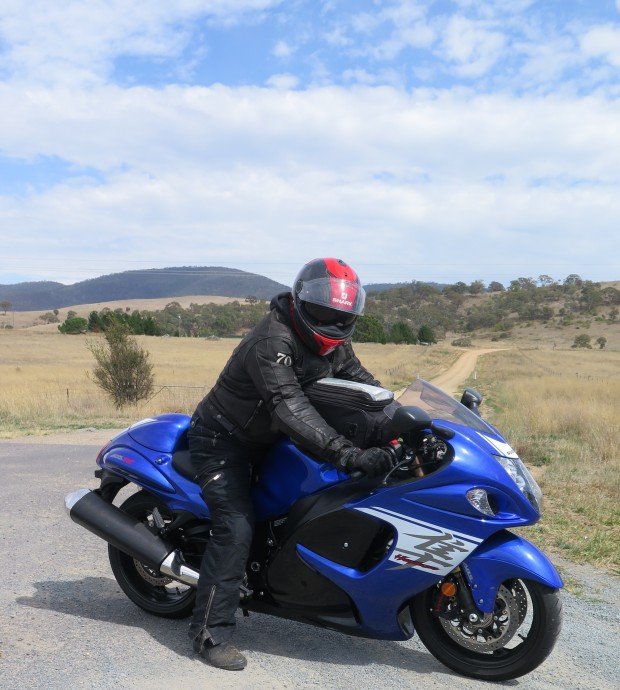 “No, officer, I was not speeding.”

Here then is a bike that tours brilliantly, handles superbly well, goes harder and faster than most people can ride, and isn’t pasteurised and de-natured by hippy electronics.

How refreshingly old school – a bike that relies on you to ride it, rather than you relying on the bike to stop you dying.

You do get ABS and three engine modes, but they all felt kinda the same to me.

It’s more stable than the Swiss economy at any speed, has a vast dash-layout reminiscent of Yank muscle car, is ergonomically sane but still sporty, and has one of the finest gearboxes ever built. The adjustable suspension is fine. I had no issues with it. 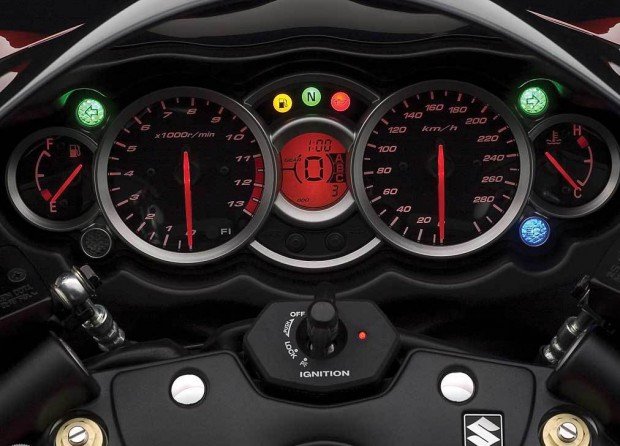 All the circles all the time. It’s actually a great layout.

Not much new has happened to the Hayabusa in 2017. I think maybe they painted the Brembo calipers black.

But then nothing needed to happen to the Hayabusa in 2017. The titanium valves, iridium plugs, KYB fully adjustable 43mm USD DLC-coated (Diamond-Like Carbon) forks, ’Busa-dedicated Bridgestone hoops, forged, three-ring pistons (one of which is coated inside a vacuum chamber with chromium-nitride using a Physical Vapour Deposition system – which is Suzuki-speak for bizarre alien shit) – are all the same as last year. 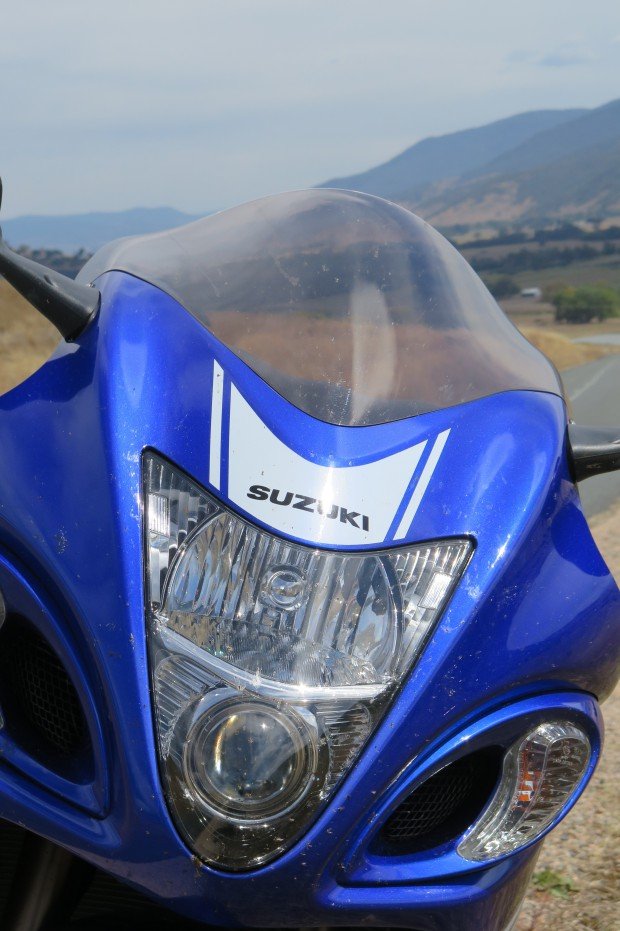 The lights work well at night. Bugs die at the same rate no matter what time of the day it is.

It was always a package brimming with bang, and totally bulletproof in the bargain.

The Hayabusa is amazing.

I would actually buy one. In a second.

Yes, the Gen III is coming. And I’m sure it will be even more amazing, given what a technological wonder the new Gixxer is, and how it is inevitable some of its electronics will make their way over to Big Daddy ’Busa.

I’ll care about that when it happens. And quite frankly, the Gen III, may well lose much of what makes the Last Mohican Gen II so brilliantly special.

You see, all the amazing I would ever need in a bike is right here and it’s right now.

I’d just forgotten about it. 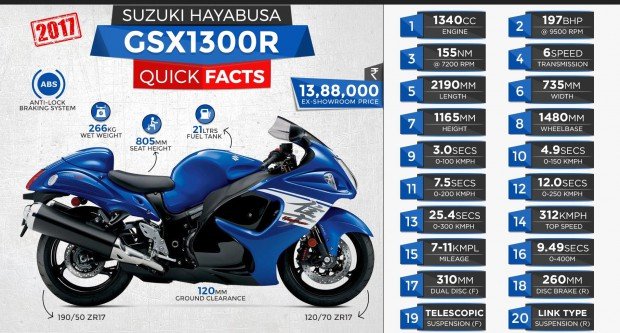 Ignore the price. It’s in some foreign currency. Everything else applies.