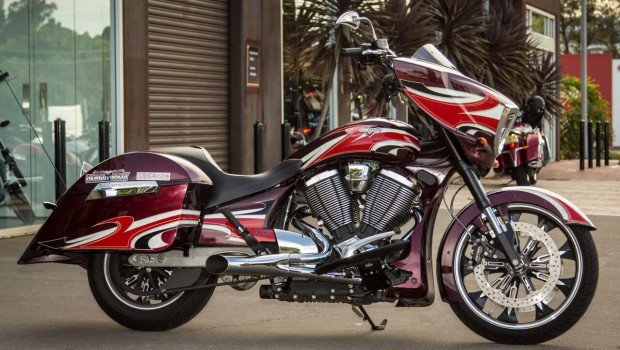 A bike is not tuned until it is dynotuned.

And while the Magnum had undergone performance surgery (which can be seen HERE), it was running a generic engine map, which, because I did not know any better, I figured was fine.
But it was not fine.

I learned this after running it on APL Performance’s high-end dyno.

Not all dynotuners or dynos are the same. This was something else I didn’t know.

Most dynos are economy-based units. Cheap and cheerful 500kg concrete drums which the back wheel turns while a computer makes calculations, and a tuner presses its keys searching for the right air-fuel mixture for the engine map. Most of them shove a single sensor into the exhaust pipe and take their readings from there. Of course, those readings are a combination of what all of the cylinders are emitting.

Proper dynotuning means taking readings from each individual cylinder and adjusting stuff from there.

APL does proper dynotuning. Its dyno is a high-end custom-built scientific extravaganza full of magnets, fans, and climate control which takes measurements every 1000th of a second. Adam also told me lots of other technical stuff, which is what happens when engineers talk about the stuff only they understand, but I understood very little of it.

He also told me that: “We do a a dynotune, not a dyno show.”

That kinda stuck in my head.

The first run, to see what was what, revealed the donk was running rich in places and lean in other places. It went up and down like a junkie’s heartbeat.

What the graph needed to show was a consistent and even path through the rev-range. What it was showing was peaks and troughs.

“What would have happened if I took it to the drags?”
“You would have got a few runs, then it could well have shit itself because it’s not being fuelled properly.”

It was not a quick process. It took about four hours.

But it was methodical, precise and kinda OCD – which is pretty much what one wants from a dynotune.

At the end of the day, I got a Victory Magnum with a few more horsies and a bit more torque, which was great. But what I also got was a Victory Magnum that ran crisper, cleaner and much harder.

The difference was really quite remarkable. The throttle response was immediate, and the engine was far more responsive. Gone were the big backfires I was getting changing up and down, and while it still did shoot a salvo out of its pipes now and again (an issue with the untuneable Power Commander module – a piggyback system not much used by serious, professional tuners), it just ran markedly smoother and better throughout its rev-range.

“Let me know how it goes,”Adam said as I left.
I called him that night after going for a bit of a fang.

“You’re some kinda wizard, aren’t you?” I said.
“No. I just know how these things need to go. Happy?”

“Like one of them wallowing pigs you’ve heard about.”

“Let me know when you’re going to the drags. I want to see your face after you run it.”

“I certainly will. But now it needs to be made pretty. It is time to bling the Thunderbastard.”

Stand by for Stage Five.

APL Performance does much more than just high-end big-twin engine builds. They tune and even do routine services on all kinds of bikes. If you’re deadly serious about getting the most out of whatever you ride, in whatever state of tune it is, LAMs bike or track-weapon, go and see Adam and his team out in South Windsor.

Details can be found HERE.