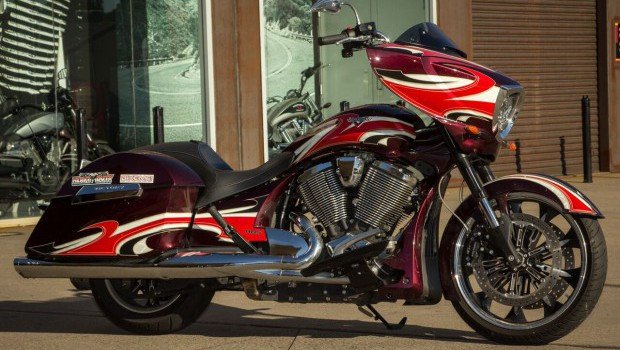 Men who take their motorcycles drag-racing can usually be found, a few days later, in a workshop. They are awash with despair and expectation in equal measure.

“I need a second, damn your spanners! Give me a bloody second! No, I don’t care about paying my mortgage, I care about a second!”

It is an age-old lament. 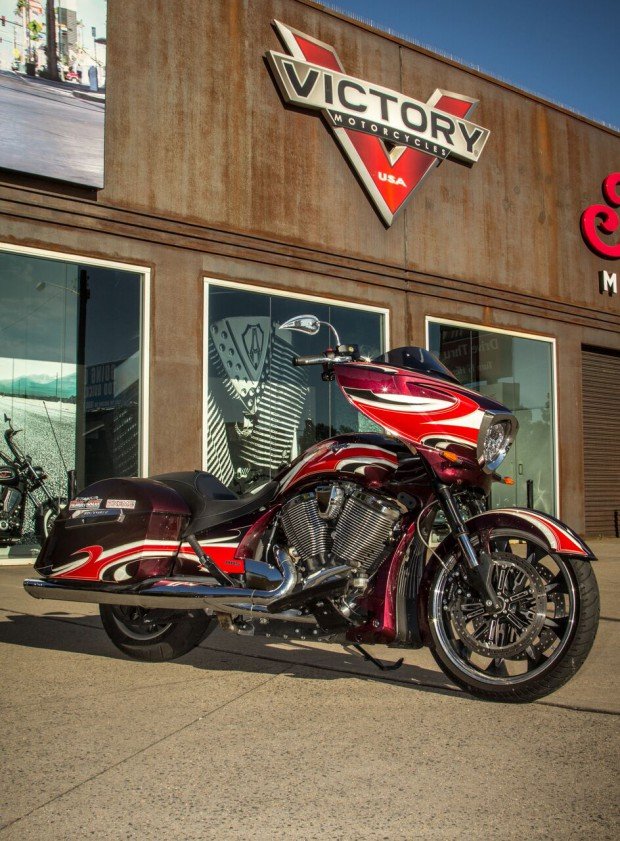 I brought it here… 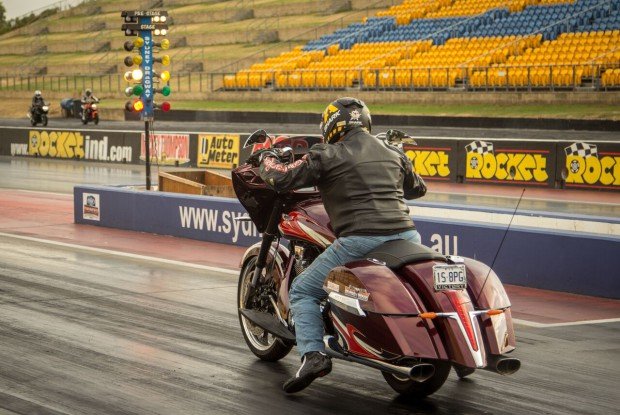 …shortly after being here. As you do.

So following on from the recent high 14s/low15s passes I made upon the Magnum at Western Sydney Dragway, I was back at the Victory showroom in Ashfield.

“It’s time, Chris,” I said to Chris Papas, the steely-eyed Parts and Service Manager and my enthusiastic co-conspirator in this build.

As was Julz Woodmansy, Victory Tech Extraordinaire, who was to perform what I hold as mechanical miracles in a very short space of time. 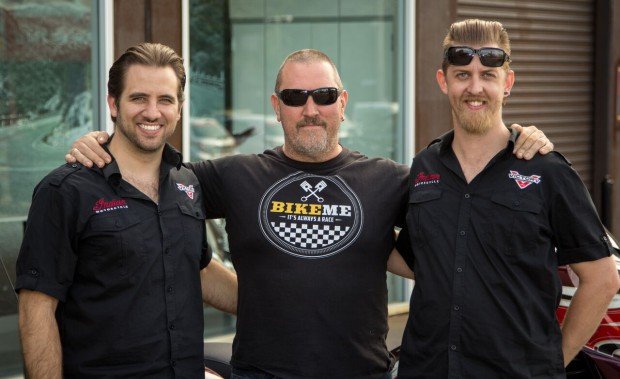 Chris, me and Julz. The struggle is real.

The plan of attack on the Magnum Opus is three-pronged, much like what Major General John Burgoyne devised to beat the uppity Yanks during the Battles of Saratoga in the spring of 1777 – but with much greater success.

First we needed to make the stock Magnum faster.

Then we would bling it like a teenage Russian trophy wife. 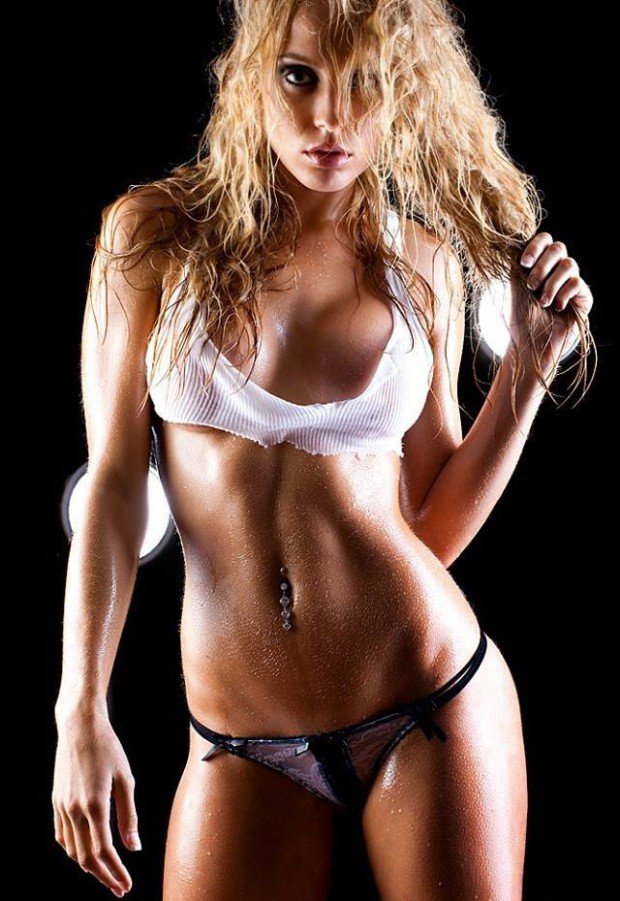 This is Olga from Krasnoyarsk.

Then we would supercharge it.

Simple. Beautiful. Ruthless. Just the way a good three-pronged plan of attack is meant to be.

On this day, the following items were to be force-fed with lethal Julz-precision into and onto the Magnum:

These mods are the quickest and most cost-effective way for you to get a fair bit more bang out of your stock Victory. They can be done in a day. You roll in in the morning, pfaffing along all original, you roll out in the afternoon making thunder and smiling like a fiend. 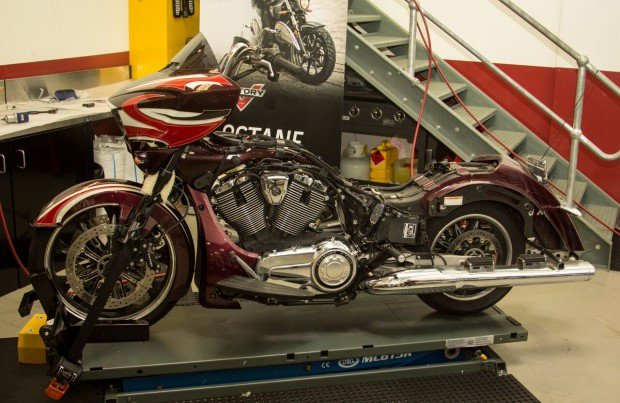 Time to get naked.

“I have no idea what you’re doing, Julz.” “That’s probably just as well.”

The Loydz Stage One cams give a longer duration lift and in conjunction with the adjustable flywheel (on Mark 4), permit the bike to remain eminently rideable in normal conditions, while making its inside machinations far more…um, profitable.

The airbox is a big thing. Victory’s airboxes live in the frame under the front of the tank. They are surrounded by a horrid rubber chokey-thing because the suntanned emission fascists in California want to keep Arctic narwhals happy or some such nonsense. This means your standard Victory is struggling to take a breath. It’s like its being water-boarded while trying to run. And we all know that while water-boarding is how terrorists are baptised with freedom, it is counter-productive on motorcycles. 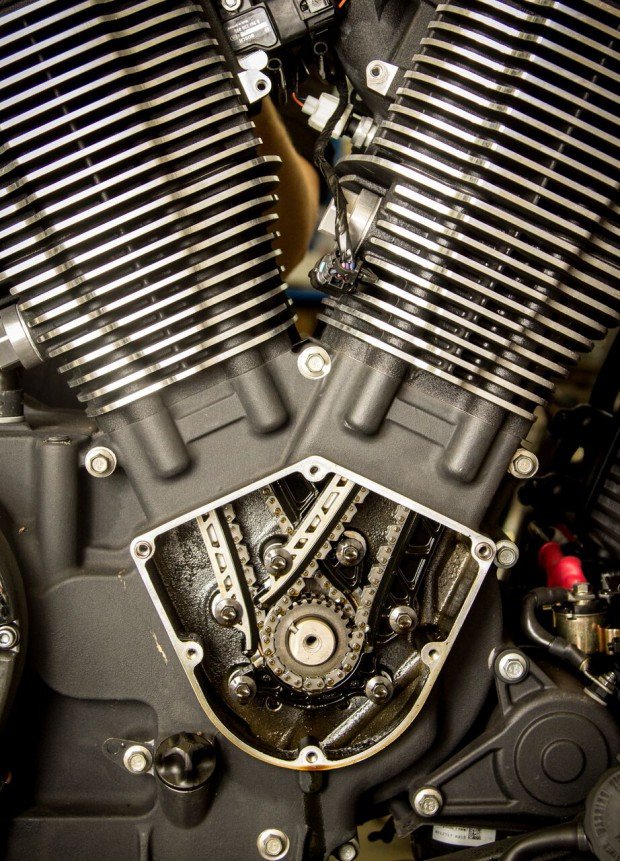 Timing wheel out and you can see its gizzards. 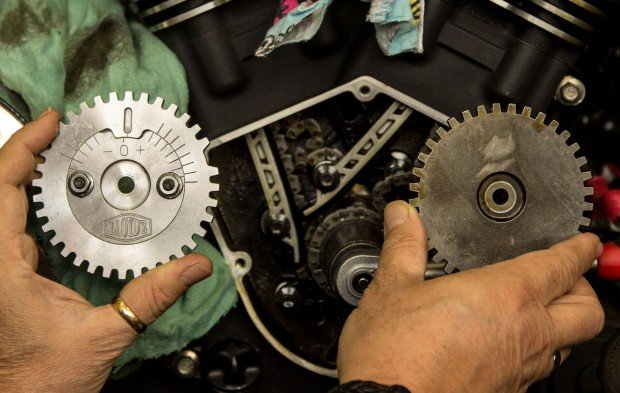 The Loydz filter is a high-flow unit and the rubber bastardry that surrounds the hole it goes into is thrown into the bin.

The quarter-turn throttle is a revelation. The standard throttle turns through more than 90 degrees. It makes sawing up and down the rev-range during spirited riding less pleasant and fulfilling than it should be. With the travel reduced to 45 degrees, the fiendish grin just gets wider. Do this, if nothing else to your Victory. 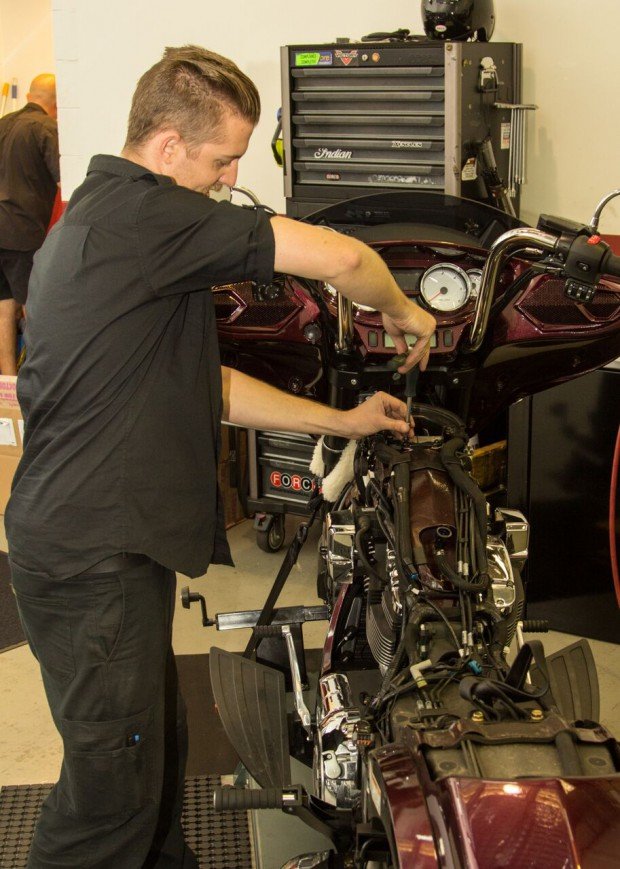 This is Julz murdering the rubber choke point on the air box. 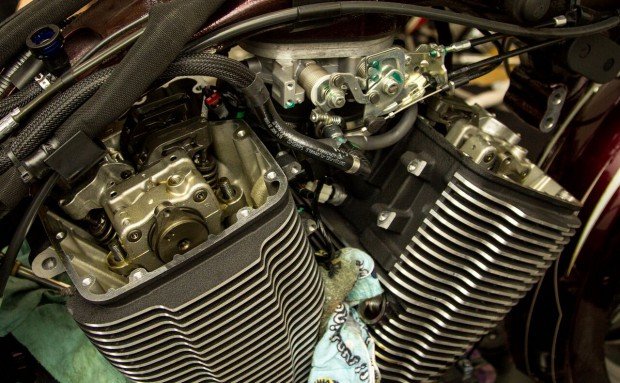 Stage One Loydz cam on the left versus the stock cam on the right. Note the longer-duration profile on the Stage One.

And now the pipe. And oh what a pipe the Trask unit is. This is a true two-into-one drag pipe. It is righteously loud, so if you can’t do loud, put your man-card back into your girl’s purse and take yourself off to the Shame Corner.

We decided to change the pipes for three reasons. Firstly, the tri-ovals which were fitted and replaced the standard pipes were fine in many ways. They sounded great, they looked lovely, but they did scrape on corners when you were hooking in.

If you’re never going to hook in, you’ll love them. But if you’re prone to moments of red-misted madness (and bear in mind that the Magnum is far and away the best-handling Victory), then you’ll be hearing grinding sounds. 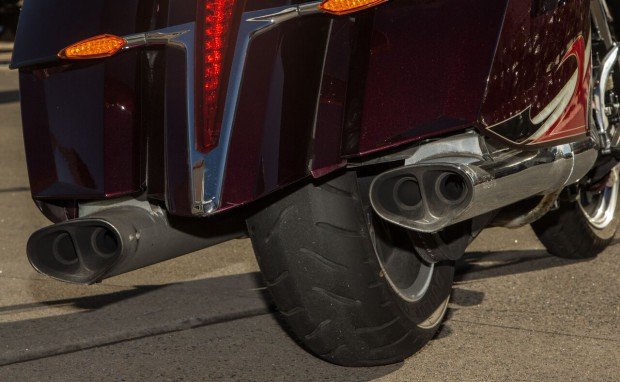 You can see I was wearing away the outside of the tri-ovals. 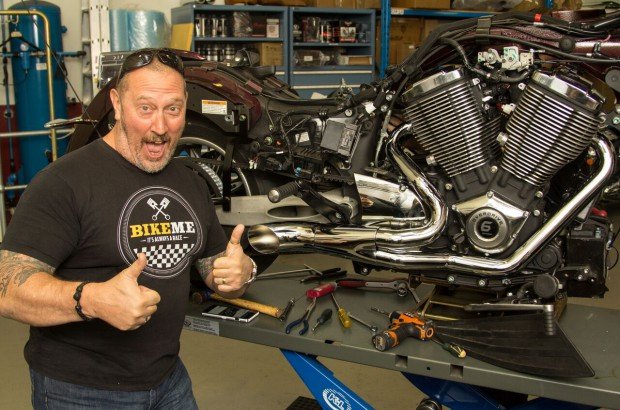 This will no longer be the case. Happy days.

Secondly, there’s the weight thing. I understand that baggers don’t have much to do with being light. But I also understand that any weight-saving that can be made does count. We saved 20kgs by replacing the stock system with the Trask item. This is no small thing.
And lastly and most crucially, a bagger which sounds like a glorious artillery barrage is the kind of bagger which everyone should be riding. Why? Because it is a thundering paradox that causes people to reconsider the way they look at baggers. 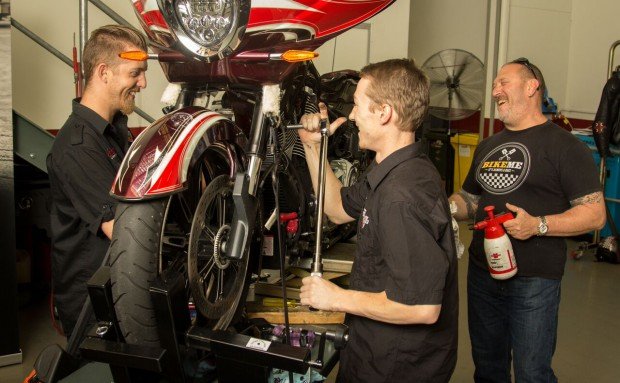 It was all funny until someone got sprayed in the face with cleaning fluid.

“Oh what a nice-looking and comfy motorbicycle that is, Enid! Perhaps we should consider cashing in a few BHP Billiton shares and getting one to see us through our dotage.” becomes “Great Holy Christ on a camel! I thought a cliff had fallen on top of us just as that bagger went past! I’m blind and deaf and my pancreas has stopped working! I must have a bike that sounds like that. Put on your miniskirt, Enid, we’re going to the tequila house!”

So, yes. Trask drag pipes. All the time, every time.

And finally the Power Commander. That’s the little black box that chants spells to the bike’s computer and tells it about the dark places it must go to. 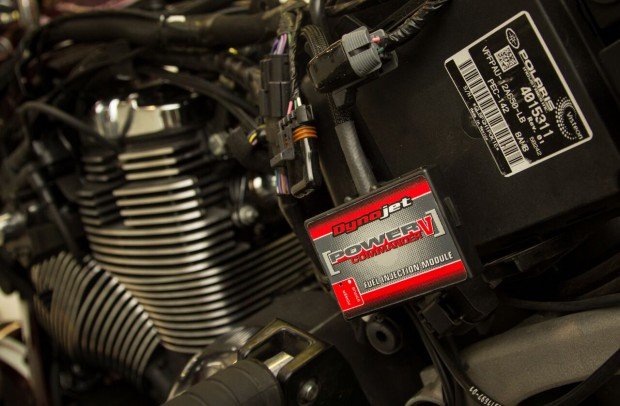 So much voodoo in such a small package.

Chris Papas installed a tune he’d already had to get the bike rolling because it was due to be hurled into the Snowy Mountains for a shakedown run the next day, but what is truly needed is a proper dyno-tune before we return to the drag-strip. 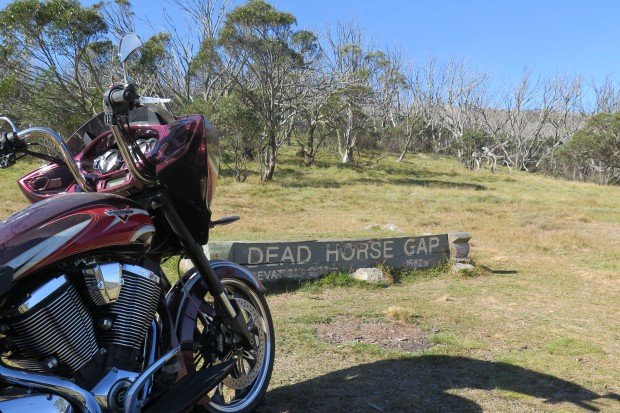 Nothing dead about this horse, at all.

Now you’ll appreciate that installing these items is a fair bit of work. Heads have to come off, as do bags, pipes, the tank, the right-hand switchblock, and the timing cover.

Julz said he could do it in one day, and was as good as his word. The Magnum was on the bench just before nine and out the door just after four. Julz even stopped for lunch, and put up with us filming his work, asking silly questions, hiding his tools and spraying cleaner into the apprentice’s eyes. Top bloke. Very tolerant and calm.

The difference the changes have made to the bike are quite startling. Put aside for a second that it now sounds astonishing (this is not easy, because the thunder is all-encompassing and overwhelming); it now goes noticeably much harder and is far more responsive.

It had a bit of a flat spot just off idle. That’s gone now that it can breathe in and out. Before the mods, 2500rpm had it rolling along at about 90km/h in top. Now 2500 gives me 110km/h. It really sings at 140-160 and I have had it to a cheery 190 (and bit over) on one of my private racetracks. Twist that throttle at 3500rpm in any gear and this great booming roar surrounds you as the thing surges forward with genuine punch. The throttle-twisting thing becomes very addictive and tunnels become places of acoustic terror for your fellow road users. 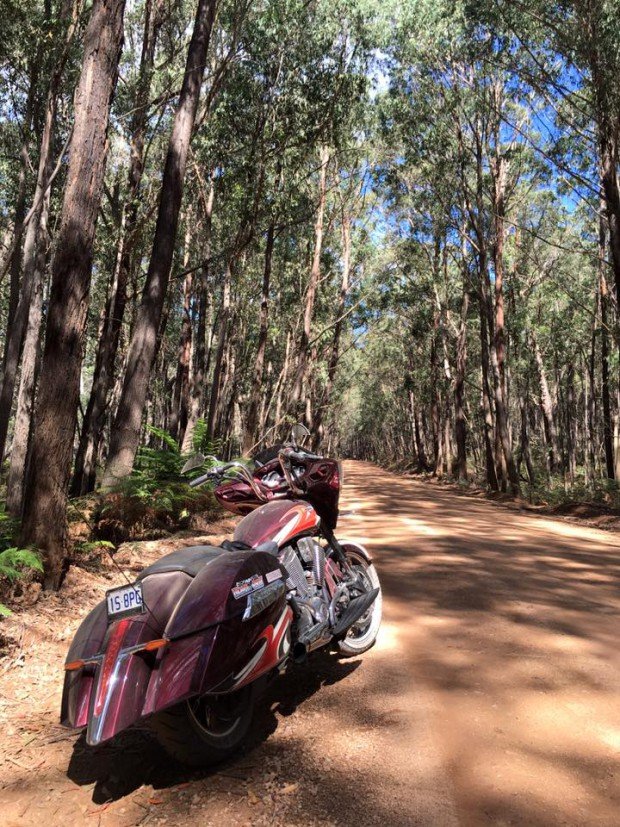 Well, if I’m shaking it down… 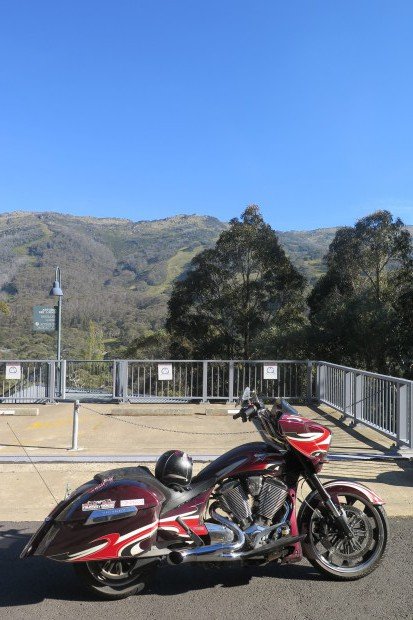 …I’m shaking it down at high altitudes.

Taking the Magnum to the Snowy Mountains for three days and 1500km of riding after the mods was the best idea ever. Beat the hell of riding it around Sydney.

It showed me that Victory builds some pretty bullet-proof bikes. I had the Magnum Opus up and down a series of dirt roads (both good and quite terrible), and hauled it through several thousand fantastic corners. I did not nurse it or baby it, because I am not that way inclined.

Yes, I touched down the new pipe and yes, I also kissed the bottom of the bags on the tarmac. But I was coming down off Dead Horse Gap into Khancoban and there were people to pass and KTM Super Dukes to catch, so needs must and all that. I regret nothing. No, in case you’re wondering, I didn’t catch the Super Duke. Or the Ducati Streetfighter. Nor did I expect to. But it was an honourable third-place podium out of six contenders, including a Speed Triple, an SV1000 and something with a top-box. 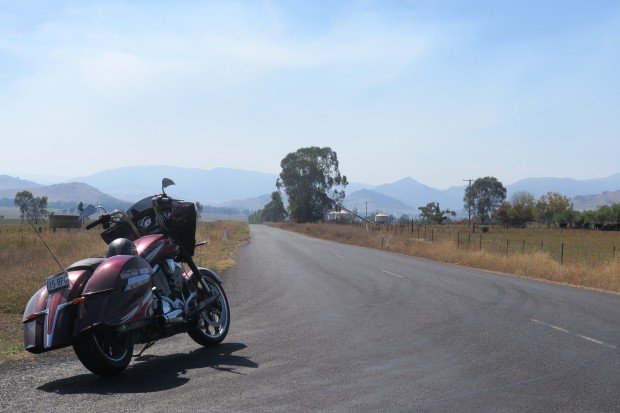 The hills were alive with the sound of crumbling mountains.

So New American Muscle is the song the company is singing right now. I’m thinking it’s a credible claim and a great tune. The Victorys are very well made and strong – but we shall certainly put this still further to the test when the blower goes on.

What’s been done thus far has been very easily accomplished, offers real-world results while still leaving the bike totally useable and one of the best mile-eaters and head-turners you can get. And it all came at a reasonable price. I shall provide a complete breakdown of costs when we come to the end of our journey. But what’s been done so far has certainly and very noticeably given the big girl some very much wanted bang. 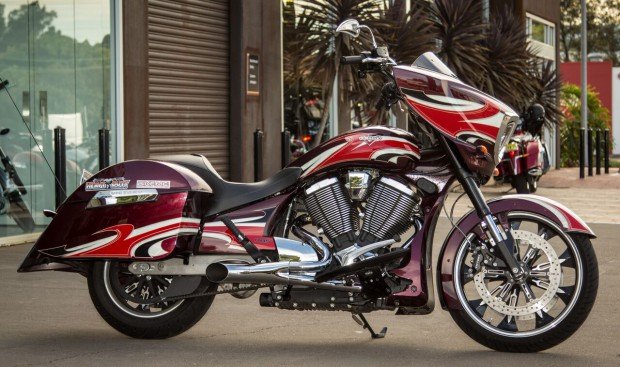 At the end of the day she looked like this, and I resolved to do something about that swingarm…

How much bang? This we shall see when we take it for a dyno-tune in the coming days, and then back to the drag-strip.

(You’re gonna love what I’ve done with the beast, Brum. But let me dress her up a bit for you.)

Oh, and I now call it the Victory Magnum Opus Thunderbastard. But only when no-one can hear me whispering to it.

Here’s the video of the build: 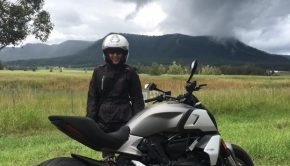