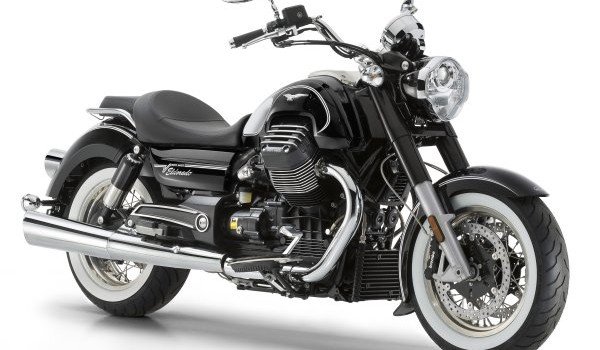 No, I didn’t spell ‘bellow’ wrong. Bello is Italian for ‘handsome’, and that is certainly the case with the Eldorado. I haven’t had this many people stop and stare and tell me what a beautiful bike I was riding in ages – and I ride a lot of pretty bikes. 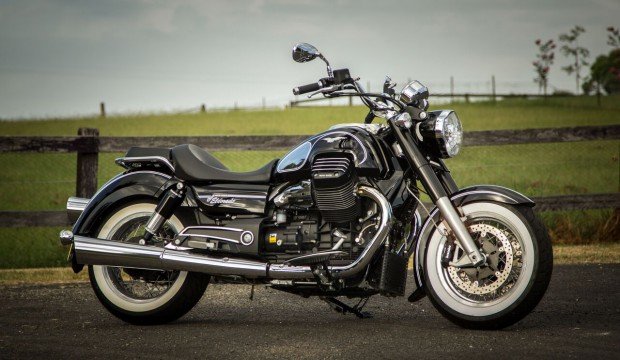 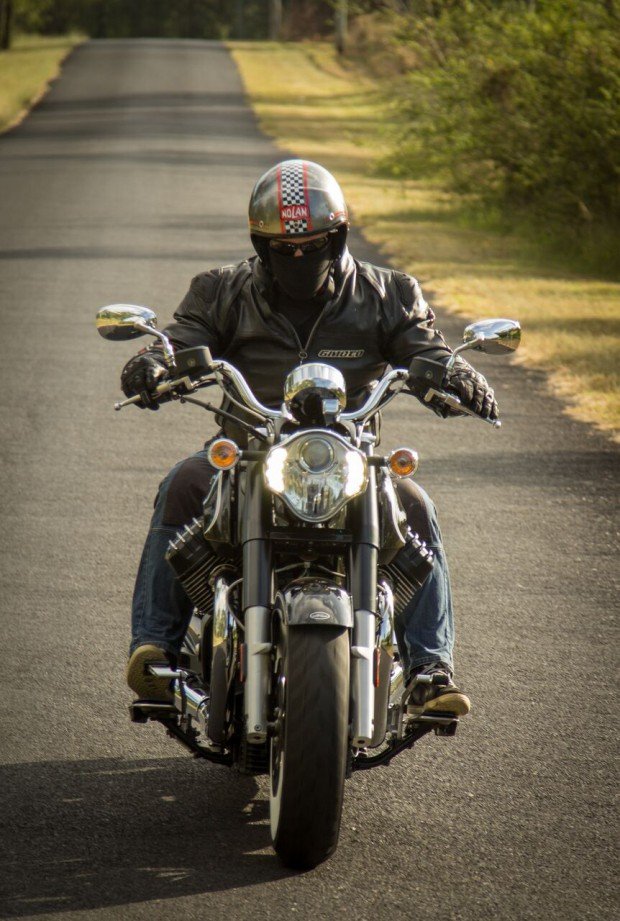 Now coming to a piazza near you. 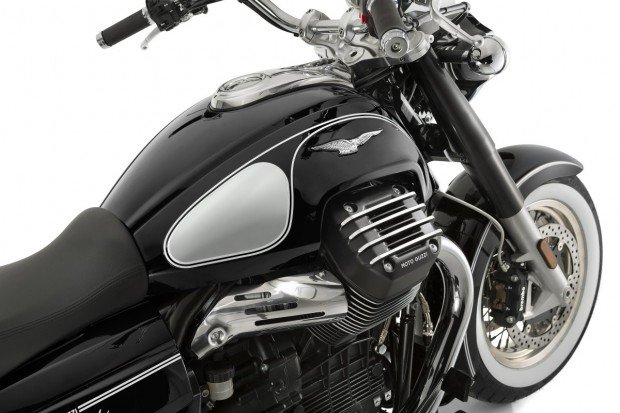 The attention to retro-detail is excellent.

I think its retro styling – the spokes, the whitewalls, the pin-striping, the chrome insert on the tank, the killer cylindrical tail-light – just works wonderfully well in terms of pure aesthetics. It looks classy, elegant and stylish, yet honks along quite spiritedly. It pulls out of corners harder than you would initially think, smitten as you are by its classical good-looks. Traditionally, bikes that look like this don’t actually go very well.

Well, they do now.

The 1400cc donk is lively and willing, and produces 96 horses and 129Nm of torque (at 3000rpm), which is delivered in a way that will see Harleys off at the lights right sharpish. 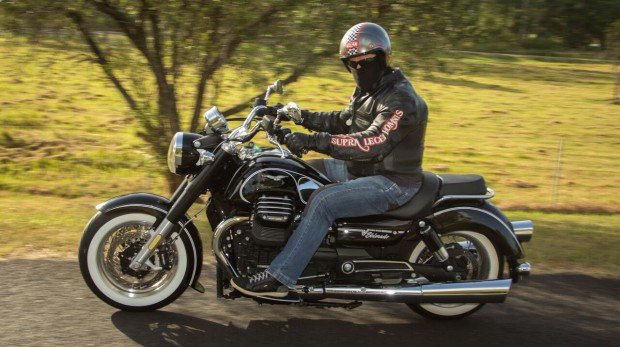 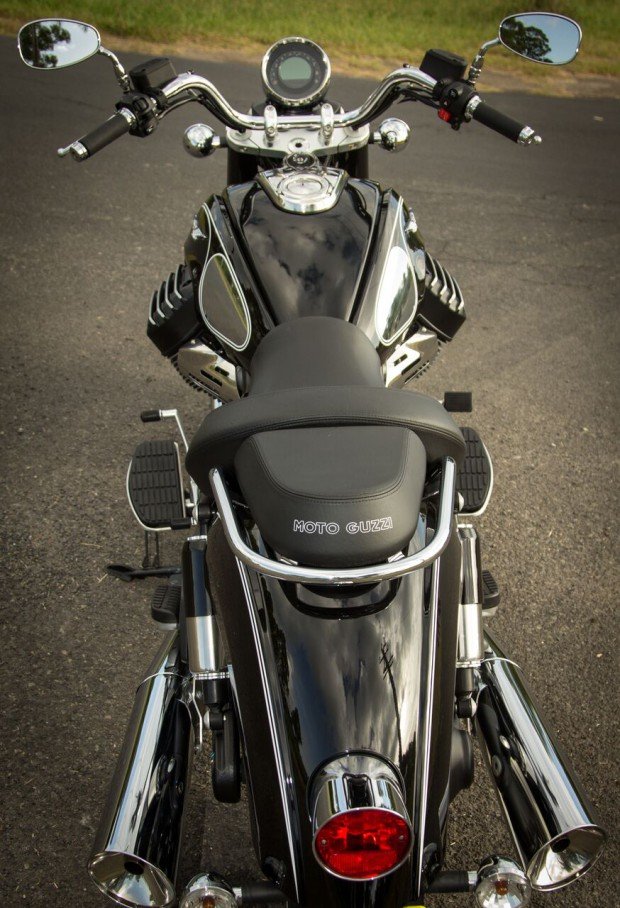 It’s a great shape from this angle.

Moto Guzzi is the second oldest motorcycle manufacturer on earth, and has been continuously producing motorcycles since 1921. But it is only in the last few years that it started to produce motorcycles which you didn’t need to be weird, obsessed, kinda smelly and a bit mad to own.

For starters, the gearbox is astonishing. Which was never the case in the past. I’m sure you believe it’s just not possible to build a smooth-changing cog-container for a V-twin. The Americans have given up even trying. But not the paisans from Mandello. They have absolutely nailed it. The entire 1400cc cruiser range, from the California to the Eldorado and its blacked-out iteration the Audace (which we reviewed on video HERE), shift gears with precision and in relative silence.

Of course, this helps a lot when you’re drag-racing Harleys off the lights. Which is something you should do at every opportunity. Trust me on this. Most satisfying. 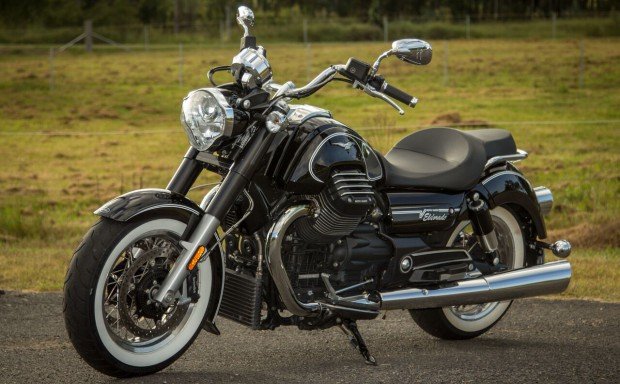 The whitewalls make it. The cleaning of them will end you. 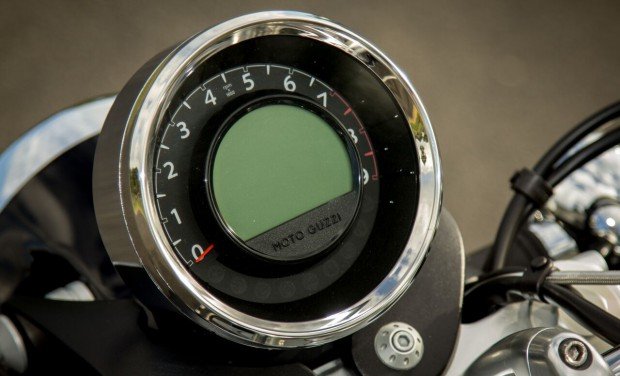 The bit in the middle is the digital speedo, and contains all the info you need and maybe don’t need, but want.

The Eldorado is a wonderful paradox. At idle it shakes and throbs just like Moto Guzzis should and must in order to be Moto Guzzis. It’s a great part of their charm. At speed, it’s smooth and poised. Which is not like the old ones at all.

Then there’s the whole suite of electronic helpfulness – fly-by-wire throttle, ABS, three engine maps (leave it in Tourismo), cruise control and traction control. And if you’re really into your computational wizardry, you can access MG-MP which links your Smartphone to the bike and the Internet. Dowload the app, mount your phone to the bike, and you can examine and bask in a vast range of info, including an owner’s manual, trip info, fuel consumption and how to order beer and loose women in Italian (I made that last bit up). 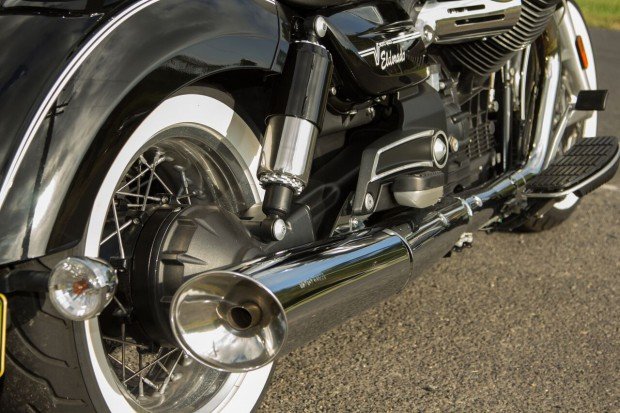 Yeah, I’d certainly change the pipes. It has to have a note other than the one it has. Ice caps will melt, but I do not care. 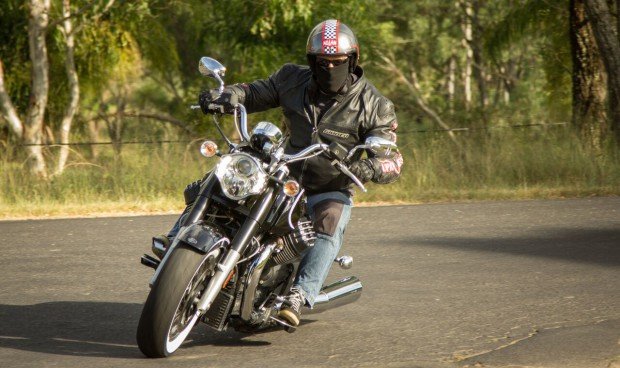 I wore the correct Nolan helmet that day.

The rider assists all work well, though you will notice the ABS doing its thing when you’re up against the wall, and the fly-by-wire could be crisper. Brembos front and rear provide great feel for a cruiser, and are head and shoulders better than the American offerings.

Is this the same bike as the Audace? Yes and no. It shares pretty much everything crucial like steering geometry and engine, but the Audace has a bigger back tyre, and a very different riding position and rear shocks. As a result, the Eldorado steers a little quicker, but conversely, it’s not as well suspended up the back as the Audace is. 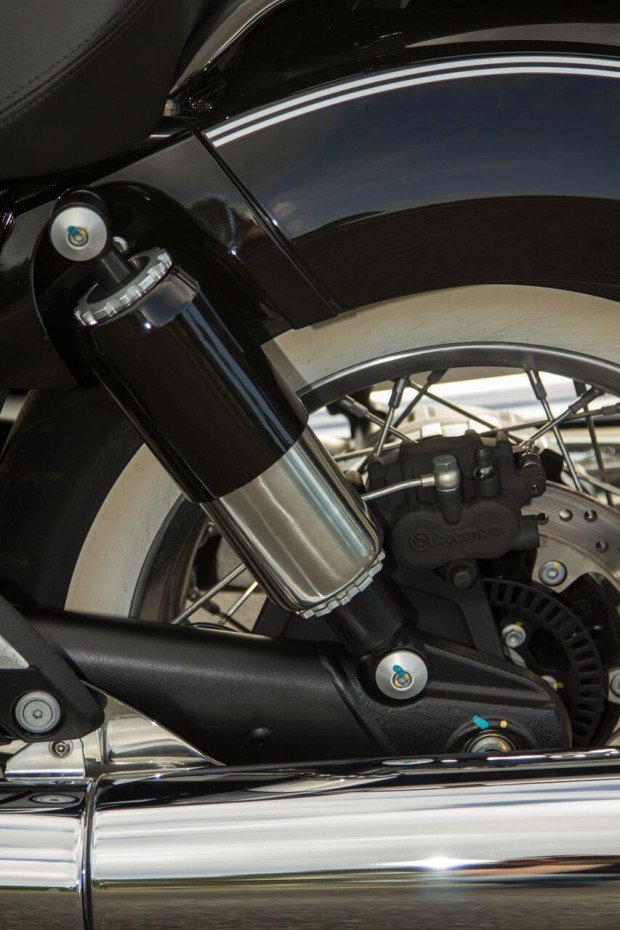 The shocks look great, but made me squint a little.

In fact, the rear shocks, which are adjustable for preload and damping, were the one thing that let the bike down. Not much, and not in a way that many owners would even notice, but enough for me to give it the squint-eye after a while. If I was engaged in spirited riding, it would thud over bumps in a most undignified manner and my chakras would drift out of alignment. I turned the dampening up as far as it would go and backed the preload off a click and it was better, but I kept wishing it had the Audace’s rear bouncers. 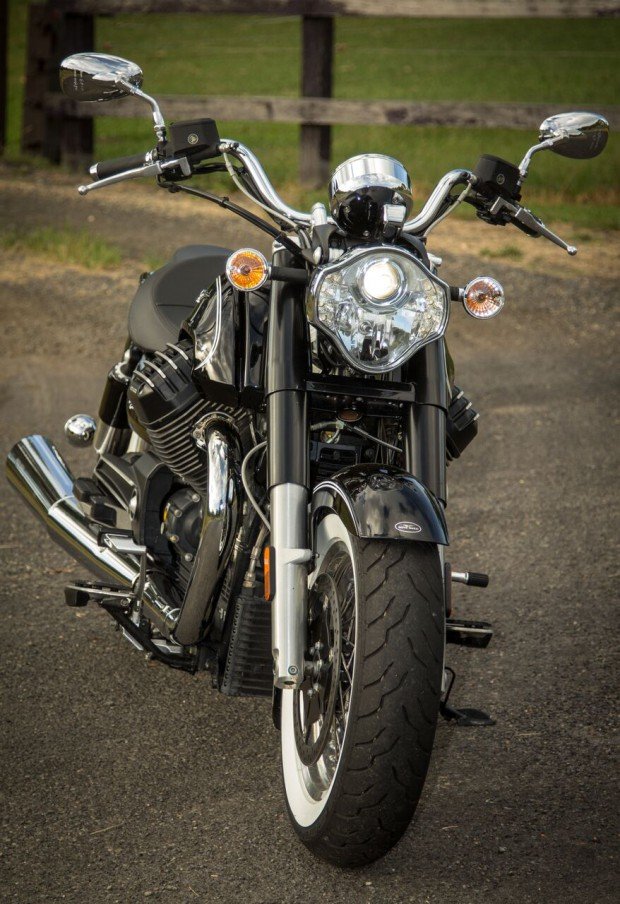 When the high-beam comes on, the LEDs go out. And rightly so.

Yes, I’m being picky. The Eldorado is not the kind of bike you want if you’re regularly engaged in bend-carving ecstasy, or smashing out big touring miles (the seat on the California is much better suited for serious touring). And I’m thinking you know that. Sure, it handles better than its American competition, and on par with the big Japanese cruisers, but I’m thinking a rigorous discussion about cruisers and handling is altogether pointless. The people who buy them don’t give a shit and will never seek to find the outer limits of their bikes. Should they seek them, the bottoms of the Eldorado’s footboards are lined with what looks like a fat plastic comb, but is actually a buffer that will save you buying new footboards each month.

The Eldorado is at its happiest when your living la dolce vita with elegance and grace. It’s the kind of bike you go styling on. It turns heads, it elicits compliments and it doesn’t scare girls in flirty summer dresses away. But it will certainly provide you with an eye-opening turn of acceleration if you need to assert male dominance.

It comes in red or black, but I don’t know which one I’d pick out of the two. The red is quite striking and redolent with panache, but the black has an elegance all its own. 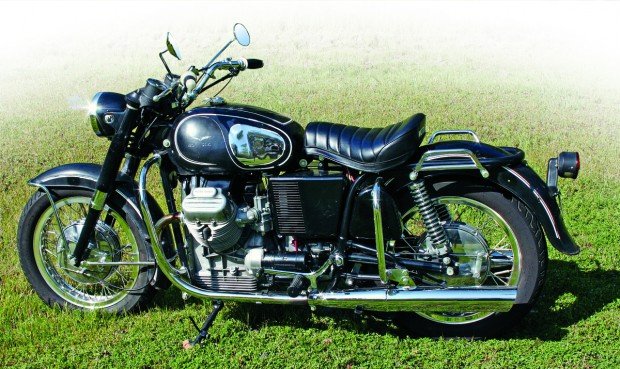 This is what the old one looked like. The styling cues are obvious 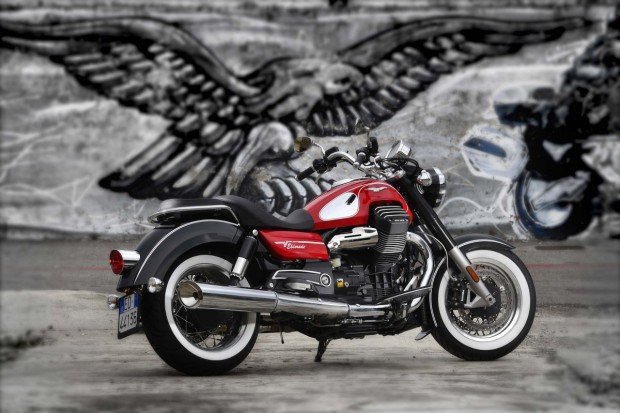 The red one is pretty striking too

I keep coming back to the Eldorado’s looks, because that’s really what it’s all about. It was, in the grim old days, one of Moto Guzzi’s most iconic models. This new one is a most worthy successor for a lot of reasons. From a practical viewpoint, it’s a good motorcycle you don’t need counseling and a degree in engineering to own and ride. From an aesthetic perspective, it’s simply stunning. 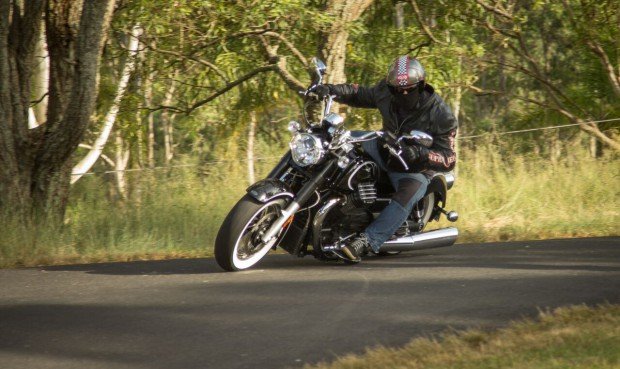 YOU MAY VIEW MORE HERE