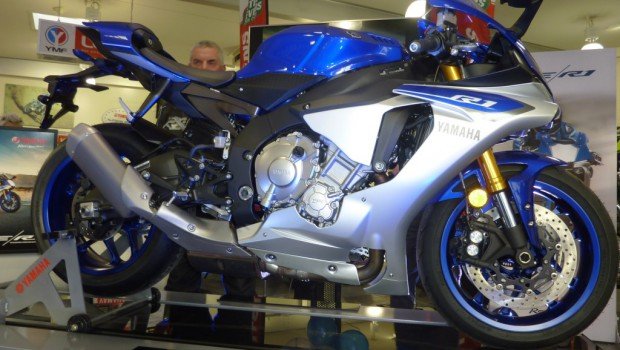 So by now at least 52,000 (give or take a few hundred) of you have watched Borrie stealing food at the salubrious International Launch of Yamaha’s spanking new R1 on the YouTubes. Not all of us here at BIKE ME! are as pampered as this, which is why I called my local Yamaha dealer, Peter Stevens. I wanted to check out the game-changer for myself at the public launch on Saturday 28 march. When I asked if they were an authorised R1 dealer (not every Yamaha dealer is), I was advised they were and there was a VIP event on the Friday night before. Was I a “VIP by any chance?”

I immediately lied “YES!” My head was full of images of expensive top-shelf alcoholic beverages, scantily clad women and one of those gift bags they hand out at the Oscars. As the time approached, I went down to Peter Stevens, eager to see what was in store for me, and to rub shoulders my fellow VIPs, hoping Mila Kunis was was gonna be at her sexiest on the night. We would look great test-riding the new R1 around Melbourne. 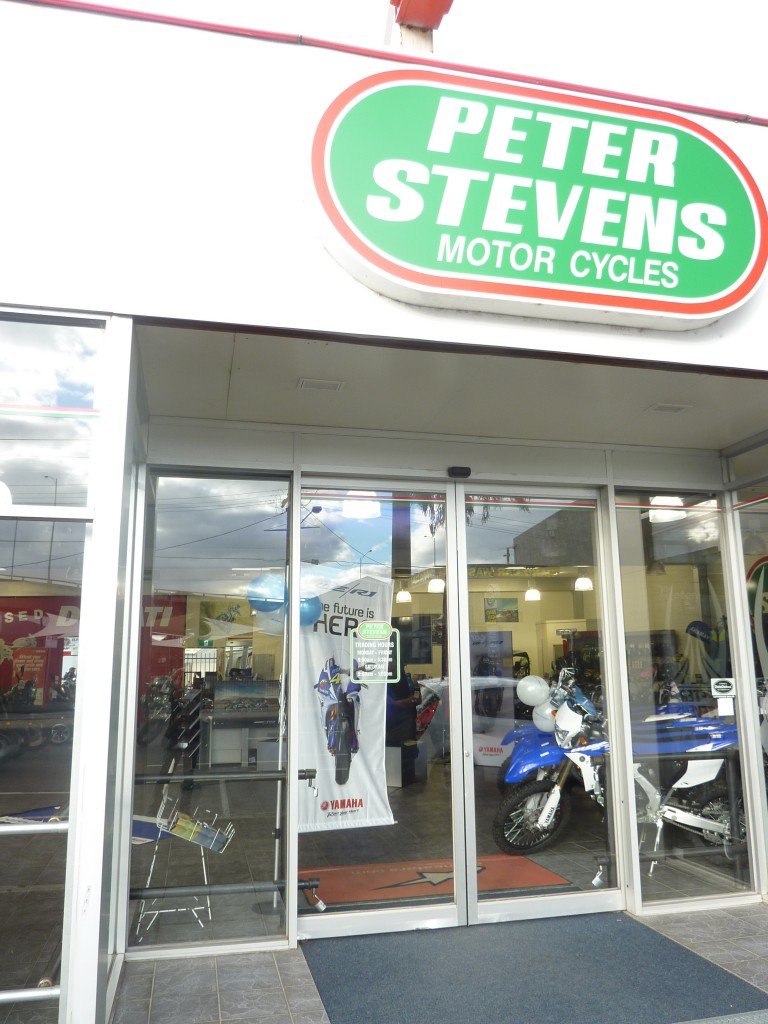 The place was locked up, notice no red carpet…I don’t think Mila is coming

I peered through the shop window to find the R1 was draped in some sort of cloaking device. The Yamaha reps greeted me at the door, resplendent in their WE/R1 bright blue tees. I was immediately offered something to eat and drink. None of it was alcoholic.

Sales Manager David Hunt made a brief intro which was followed by a delightful video presentation showing Rossi slowly getting out of a bath and riding a bike (the ladies in the crowd oohed) the big reveal came. 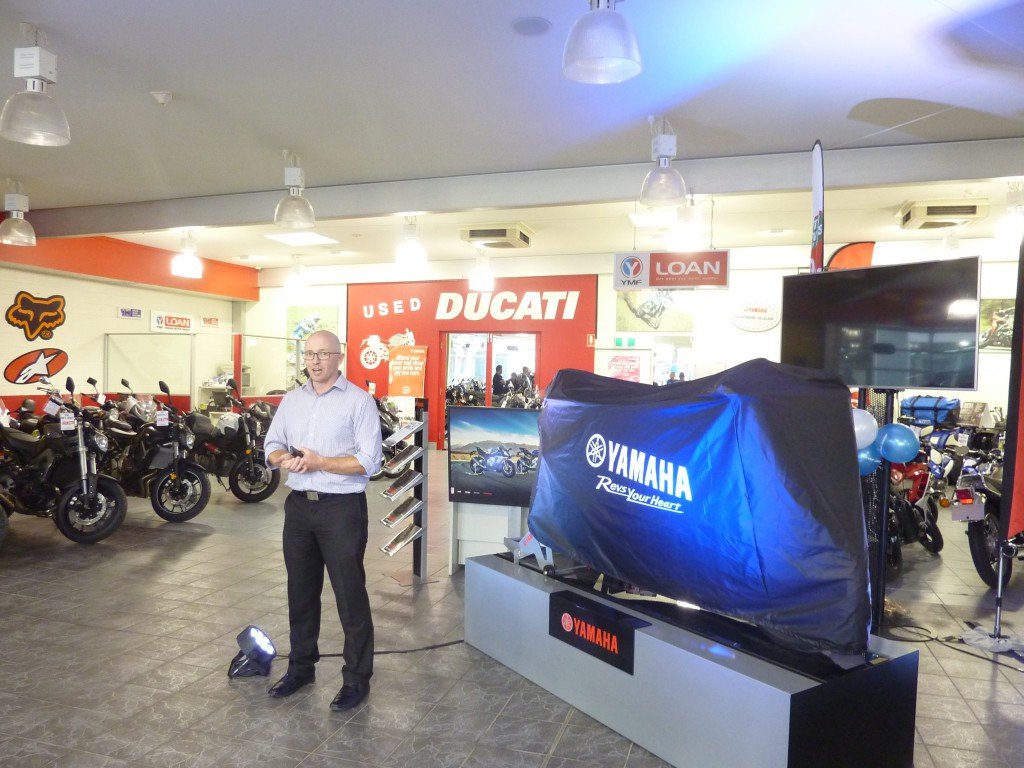 Dave’s not much of a talker…perfect 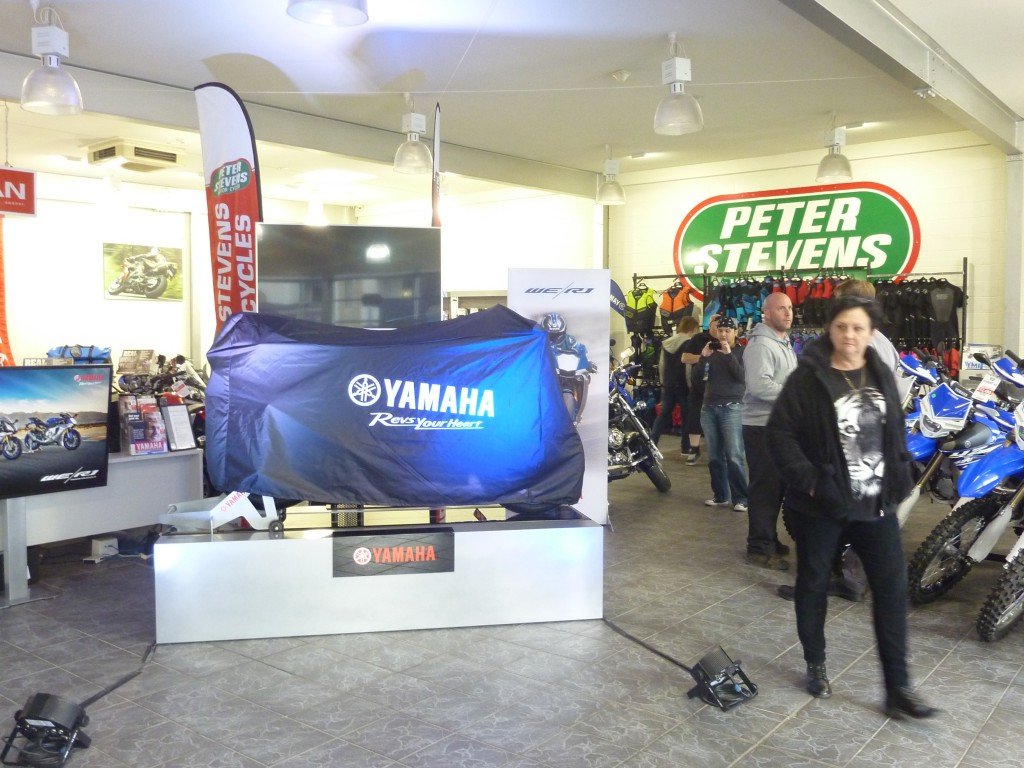 Harry Potter lent them his cloak of invisibility 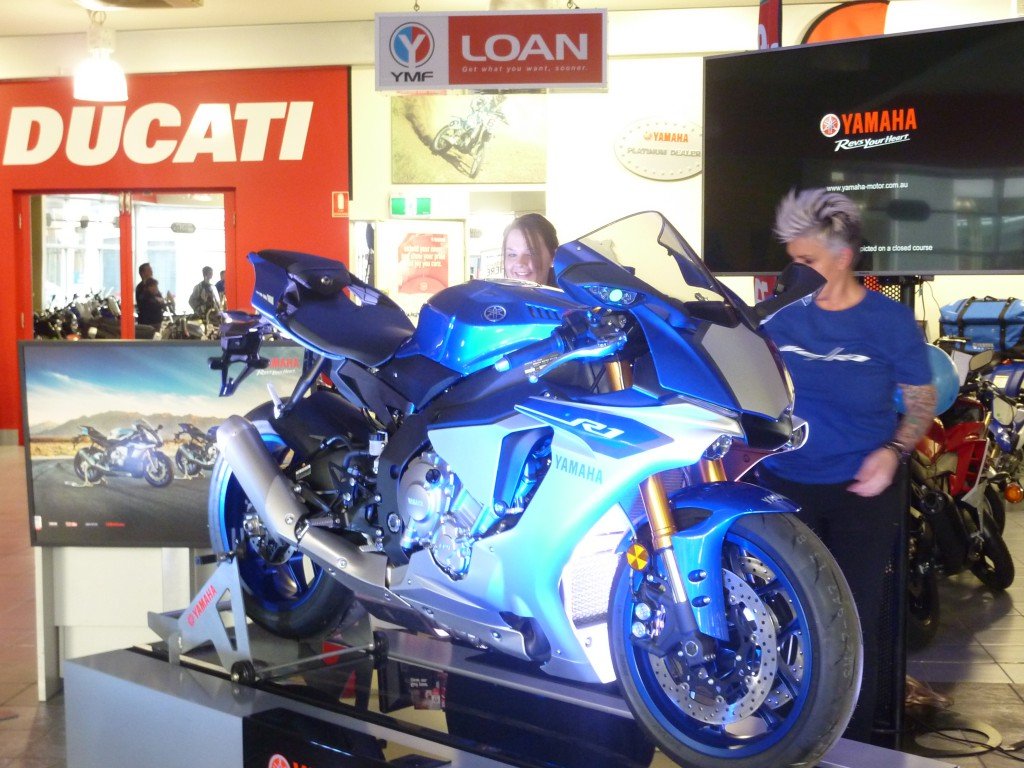 The machine on display was owned by Steve, a local bloke who had kindly let Peter Stevens use his bike for the great unwashed VIPs to salivate over. I had a quick chat to Steve and he was doing his best control his excitement.

Steve: “Mate, I’ve always been a big fan of bikes with the tuning fork logo on them. I traded my glorious 2010 Yamaha R1 for this”

Me: “When did you put your deposit down?”

Steve: “Even though I’d fallen in love with it the first time I saw it, I actually only placed the deposit down last week. I can pick it up on Monday. I’m going to be here at sparrow fart to get it”

Me: “What feature of the bike are you most looking forward to?”

Steve: “The electronics package. I’m keen to see what sort of difference/improvement it makes to an already awesome bike.”

Me: “So where will your first ride be?”

Steve: “I’ll take it for a squirt down to the Great Ocean Road, then I have a track day booked at Phillip Island on Easter Monday”

Me: “Excellent, have you seen Mila Kunis about tonight? I was hoping she would be here” 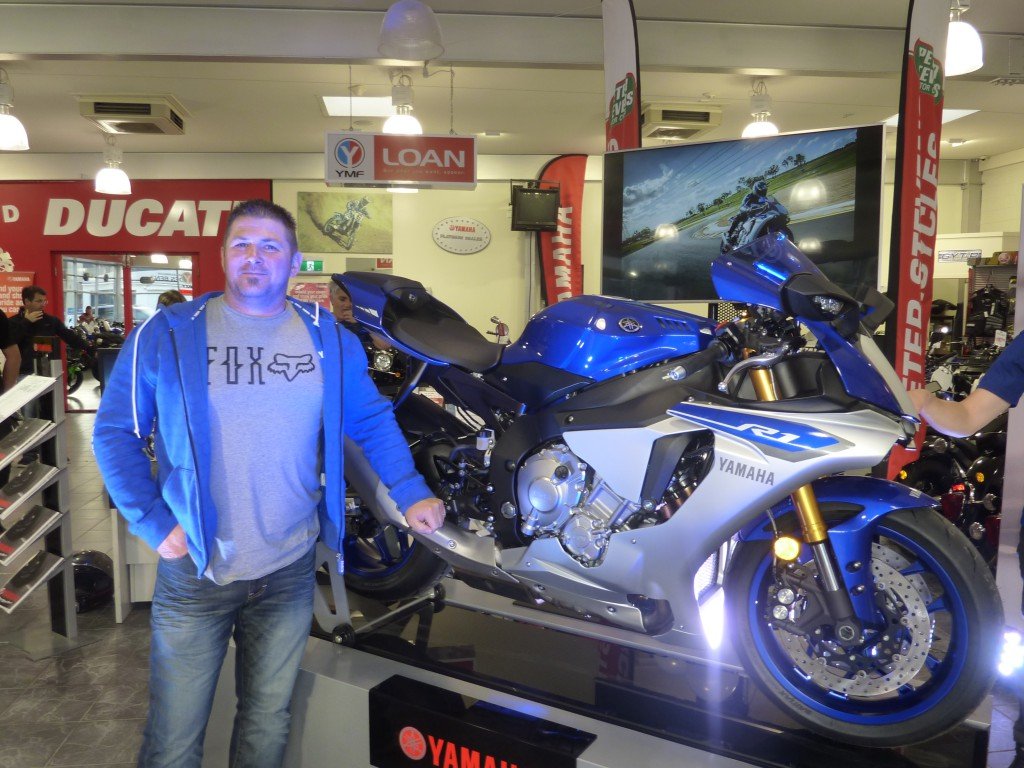 This is Steve. This is his excited face…honest

I then had a chat to a Derry and Neil who have purchased an R1M – the all-the-lights-and-buzzers R1. A mad South African couple, their passion for motorcycles is clearly visible. They put their deposit down, sight unseen, and will have to wait until later in the year to get it.

Then it was my turn to get my paws on the black demo. It had been ridden in by one of the staff and it was the one we could touch, squeeze, sniff and taste. My current ride is a 20102 Tuono V4R APRC. My first reaction was that it was heavy, but once up on the balance point it was light. The dash is simply amazing, but there are a lot of controls on the bars. The owners manual will be thick. I’ll pass full judgement when I ride it. Steve even offered me a ride on his, top bloke that he is. 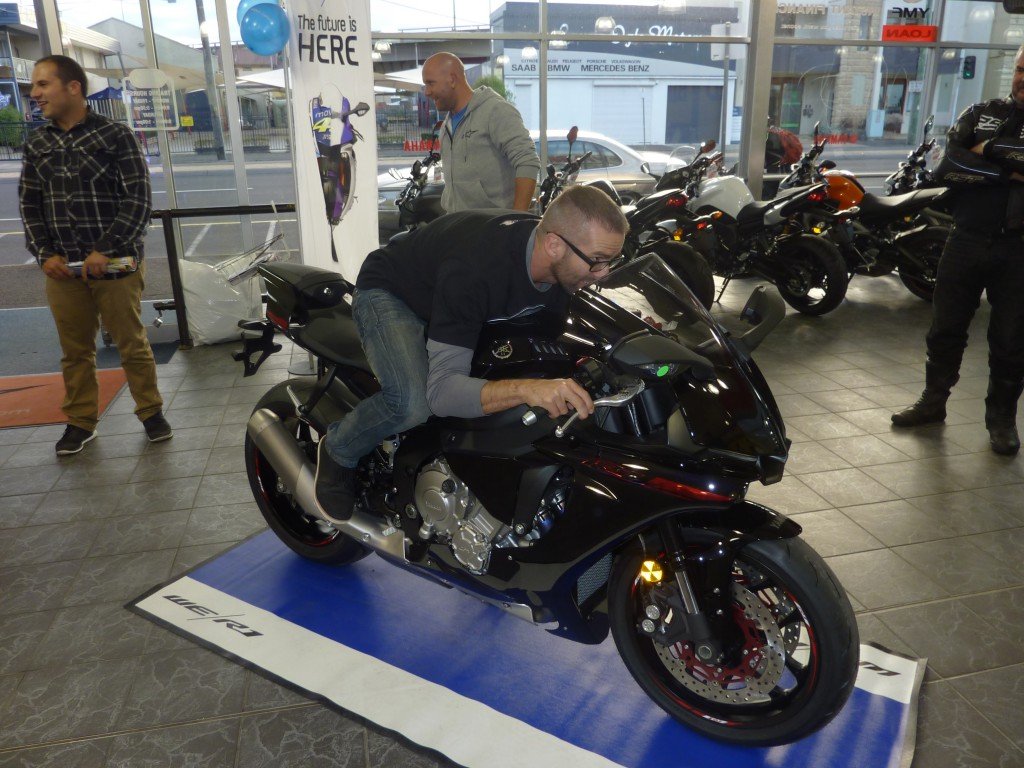 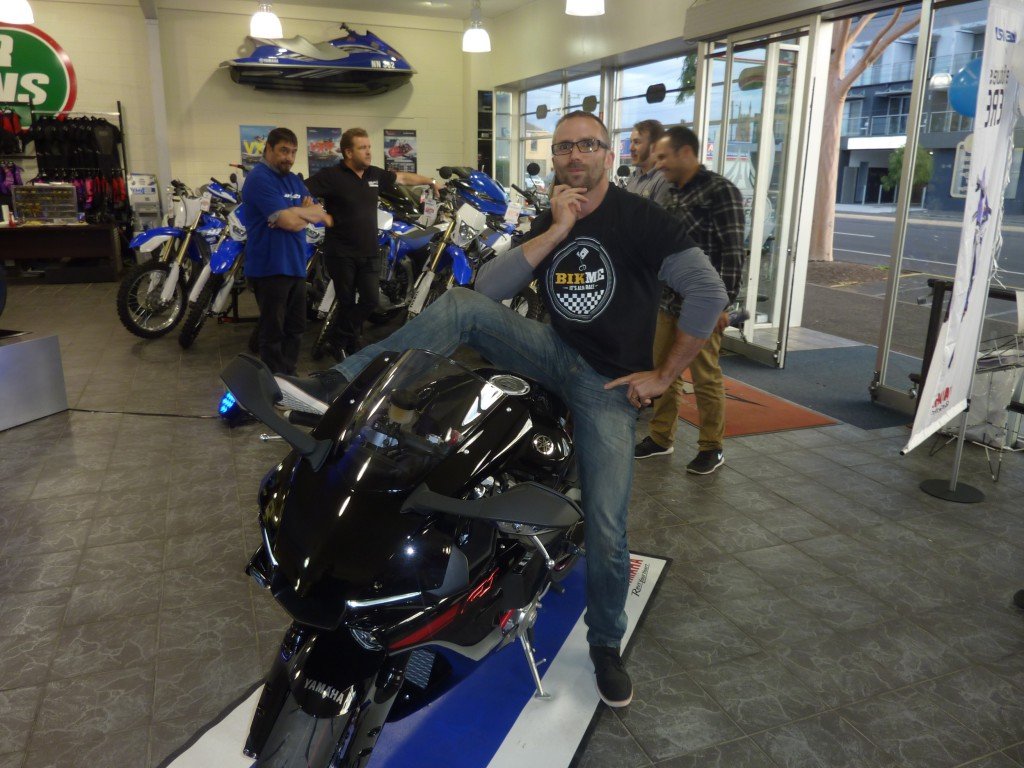 I walked away impressed. The bike looks spot-on in the flesh, but I am yet to ride it. That will tell me a lot more. My son says I cannot trade the Tuono, but the R1M is a very tempting proposition. Make sure you visit your closest R1 dealer to check it out for yourself. If you see Mila, tell her I said Hi.