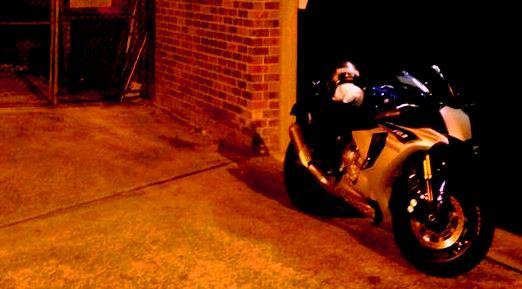 Ragnar Lothbrok’s bestest buddy, Athelstane the God-botherer, had been killed by Floki, and it was most upsetting.

In the garage, Redemption waited.

Redemption has always waited in my various garages.

It’s a good place for Redemption to wait.

And then there’s the Putty Road. Because the night time is the right time and Redemption is sometimes easier to find in starlight.

That double-point shit wouldn’t start until midnight, by which time I would have become a werewolf anyway.

And I was curious about the R1’s headlights.

I was no longer curious as I missiled us across the Colo River bridge.

I could see quite well. There will never be enough light for me, but what the two goggle-eyed lenses provided was wide, white and high-beam threw a good distance. The LEDs are on all the time, as is the left-hand lens. The right comes on for high-beam.

And then up the hill we went.

Patches of moisture informed my ride. I had jiggled the Menu and Mode buttons around until other interesting numbers appeared, and I felt the R1 had a handle on shit.

The corners strung themselves together and stupid numbers appeared on the speedo when I dared to look. You actually have to flick your eyes down to see them. In real life, your eyes are better off looking for stray furry bastards that leap out of trees.

The numbers are meaningless anyway. I was alone. There were no witnesses. It’s best that way.

I made it to Klaus’s bottle-shop and refinery, did a U-turn, parked and breathed deeply. I’d left my phone and camera at home. It was like removing a slave collar.

Interestingly, my smashed body was not complaining all that much. Certainly more squats and deadlifts were on the cards, but they always are anyway. Ergos are much better than previous models. Much, much better.

The R1 is revelatory in corners. You rarely feel out of your depth.

It doesn’t make you a better rider than what you are; but it does arouse confidence – and that confidence is not false. The electronics are top-notch, even if you’re not.

I went back down the hill and shat myself when the rear brake lever fell off.

Except it didn’t. It’s tucked in close to the engine (this is a racing motorcycle, fool) and if you’re being sloppy with your right foot and putting it farther out on the peg like some kinda whore, you’ll miss it. Like I did.

Pay attention. Sloppy is not what you wanna be during The Howling.

Get your shit in tight. Get on the balls of your feet.

Get your mind right, Luke, or you’ll be putting that dirt back in Boss Kean’s ditch.