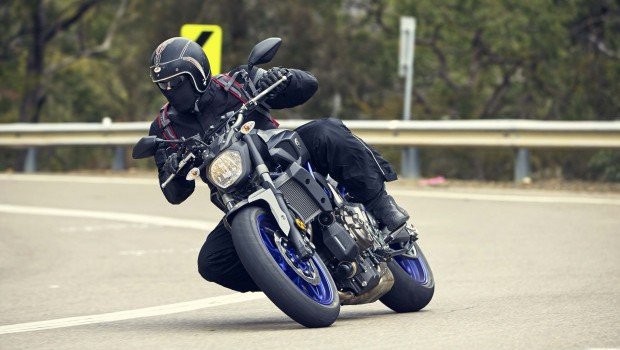 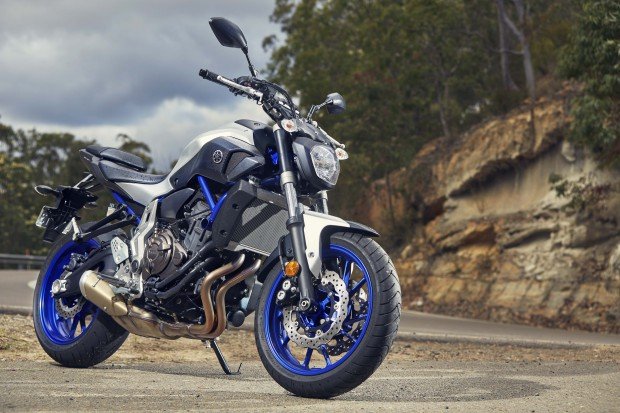 This is a lot of happiness for ten large.

“You wanna come and ride up and down the Putty Road on a new MT-07?” Sean asked.
Sean is Yamaha Australia’s Communications Manager and I am always fond of his communications.
“Yes,” I replied. “Very much so.”

“I do not know what that is, and I don’t care,” I replied. The MT-07 is one of the King Daddy Fun Bikes. Adding letters to the end of its name can only be a good thing.

“That is easy to fap to,” I whispered.

And so one recent cloudy weekday morning, I presented myself at Yamaha’s HQ and watched a man wheel five MT-07 HOs out of the massive Fizz Cave where Yamaha stores its new motorcycles. 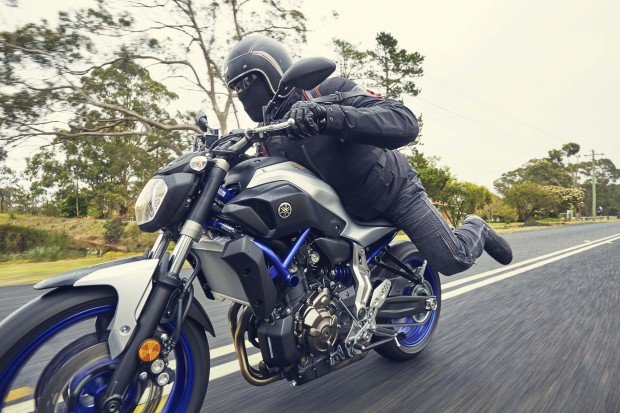 Just like Rollie Free only more shit. Eventually, my testicles descended to their rightful place.

It was a small group. Intimate, you might say; and a pleasant change from the usual press-launch horse-and-pony show.

This was not so much a standard press-launch as an invite to go for a blat. No gifts, no press kits, no fancy hotels and lengthy Powerpoint presentations. Just a “Let’s go for a ride” thing.

Top marks for that.

There were five of us. Sean, Stuart Woodbury from Australian Motorcyclist magazine, Matty Shields, my former editor at AMCN, Kevin Magee, who’s raced a few bikes in his time, and me.

In this company, I can be nothing but the slowest, even on the road. And I’m good with that.

The MT-07 HOs were all one colour-scheme – silver and blue. They only come in that livery because they all belong to the Race Blue family – which is something new Yamaha’s introducing to some of its models, and which I’m hopeful will end up being the motorcycling equivalent of Mercedes-Benz’s AMG or BMW’s M versions.

But probably not. Though you never know. 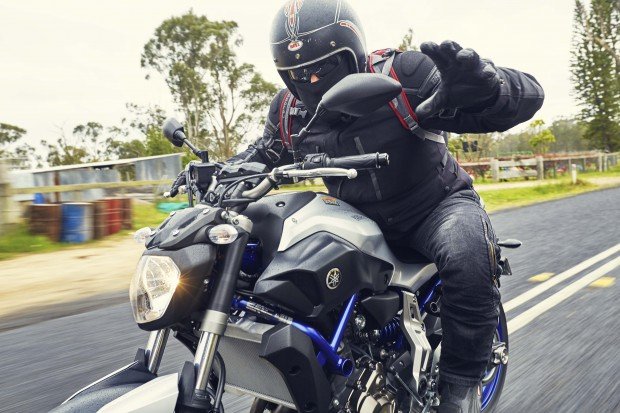 “I wonder if Josh will laugh if I grab the camera off him?”

As suburbia fell away and our velocities increased, it was very obvious how different the MT-07HO is to the LAMs version, the MT-07LA.

I’ll get to the feel of it all in a sec, but these are the numbers…

They both weigh the same (180kg), and have an identical chassis and suspension.

The LAM’s version was, hands-down, one of the most fun-to-ride and capable bikes I’ve ever ridden.

This thing? Well, work it out. More bang (noticeably more), same brilliant handling and light weight. No ABS. Knife-blade narrow. Comfortable, chuckable and able to wheelie on a whim.

The MT-07HO is pure and raw. Motorcycling redemption incarnate.

Ten large is a small price to pay for that kind of redemption.

As Magee said as we paused on some corner for photos: “Get two mates, buy three of these things, go riding twisty roads every weekend. Stay happy.”

His point is valid. 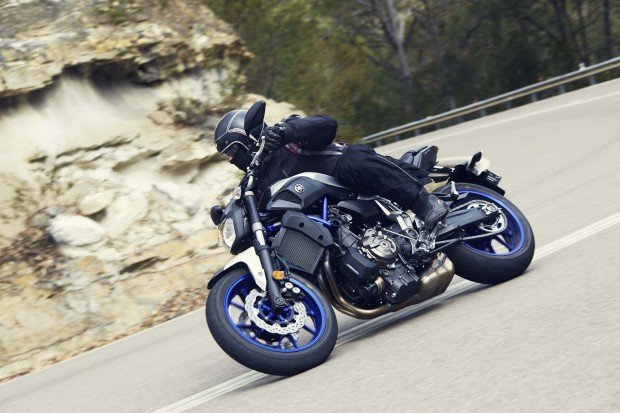 Oh good. No trucks on my side of the road.

The HO is hugely enjoyable to ride. Its handling is sure and precise. Its suspension is adequate for the road (it’s a little underdone for people who wear sponsorship on their leathers, but you’ll understand why that is the case) and it’s got great brakes.

Now then, you may hear tales of it reaching a top-speed of 207km/h (indicated). You may also hear tales of how certain people wished that Yamaha had unscrewed the hero-knobs off the pegs to prevent further damaging the Putty Road’s already iffy surface. And you may even see images of some people wheelstanding the HO. Rest assured they are all photoshopped and that speed limits were adhered to all day with unwavering commitment. Except maybe on the ride home in the pouring rain where that commitment wavered a little. I somehow did not die trying to keep Sean and Stuart in sight (Matty and Kevin had left earlier) as we belted home in the rain. I was just about to surrender and let them go when my dignity was spared by them entering Wilberforce and encountering traffic, and I could catch up.

During the day, the Putty served up its usual host of gorgeous bends and bumpy straights, but spiced it all up by contriving to have sheets of water over some of the bends. This kept our nipples hard and our gazes steely.

It was a sublime day. 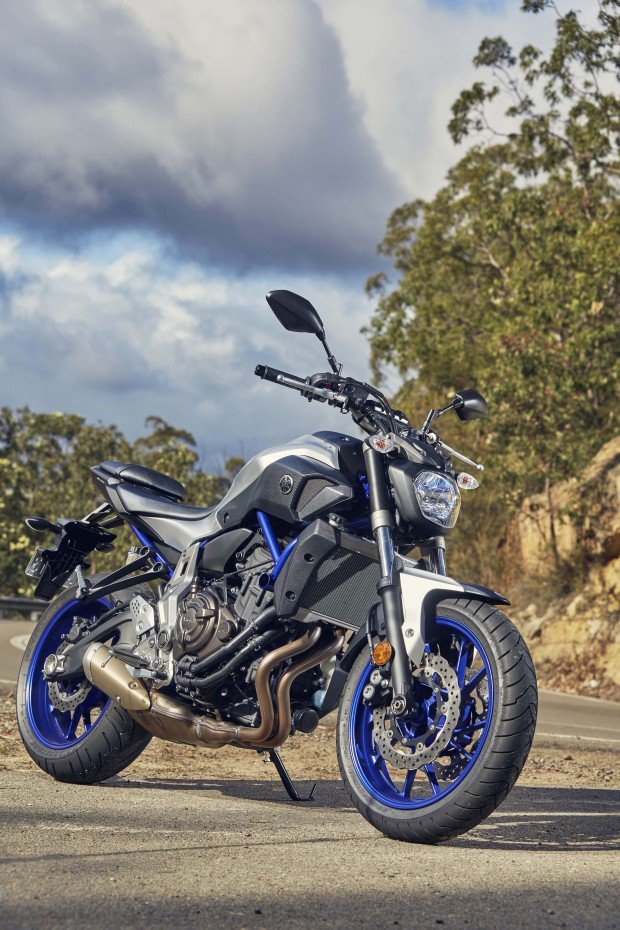 This is the only colour scheme it comes in.

We laughed, we rode like fevered swine, we worried about running out of petrol, we stared at the sky, we got rained on, we didn’t get arrested (somehow), and no-one went to hospital.

It was very much like a top day out with your normal riding buddies, except for the fact that one of us was a former MotopGP racer – a factor which always lends something to any outing.

Just between us, Magee is a very restrained and circumspect rider on public roads. He’s quite happy to ride Tail-End Charlie. And just because he won’t bang doesn’t mean he can’t bang. Because every now and then, you get a glimpse of what makes GP racers different to you and me. And that is sure something to see.

But I have digressed.

The HO? Great thing. Love it. I’m glad Yamaha finally brought the European model to Australia. It had to happen. We are better off as a nation and a people because of this.

Has Yamaha built the most engaging and lively parallel twin on earth?

To Josh Evans for the photography

Rhock Jeans for the pants

Ixon for the gloves

Dainese for the Jacket

Bell for the helmet

Oxford for the face cloth