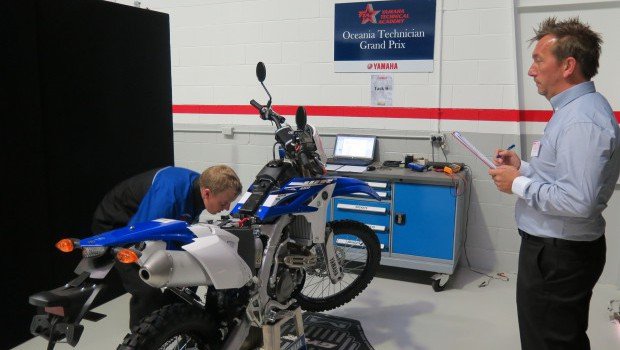 “Yeah, it’s like nah when I accelerate, but then it’s nah.”

“No I didn’t put oil in it. I didn’t know I had to. Is that why it blew up? That’s covered under warranty, right?

There are reasons why I am not a mechanic. And I tend not to engage in mechanical sorcery if I can help it.

So I hold techs in a kind of awe. Not only do they mind-read the customer, they have the ability to find the issue with his motorcycle and fix it despite not being actually told what the issue is.

Recently, I was privileged to attend the Oceania finals of the 2015 Yamaha Motorcycle Technician Grand Prix. I was the only media creature in attendance, if you don’t count Kevin Magee, who was also there. All the other motorcycle media was invited, but chose not attend because, presumably, there were no free motorcycles to ride.

But I was very glad and pleased to front up at Yamaha’s massive western Sydney HQ.

This was clearly a big deal for Yamaha and I could understand why. 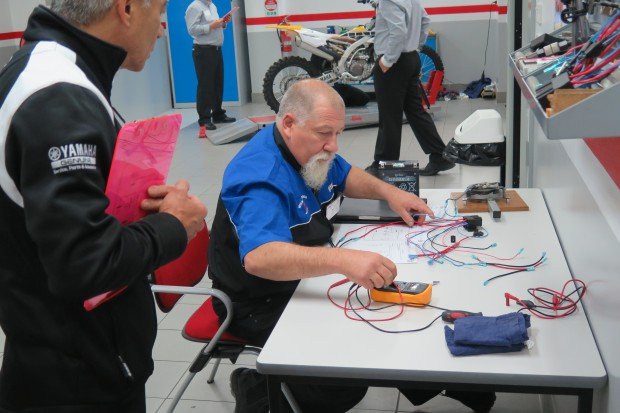 Roly Orr, the eventual winner in the middle of electrical sorcery. 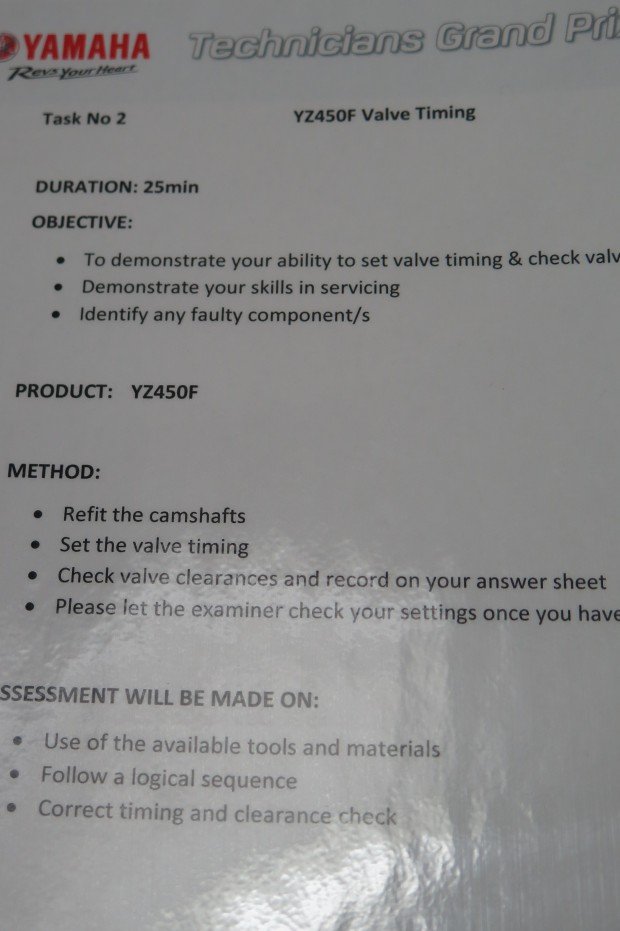 See? It says nothing about swearing. I’d be shit at this. 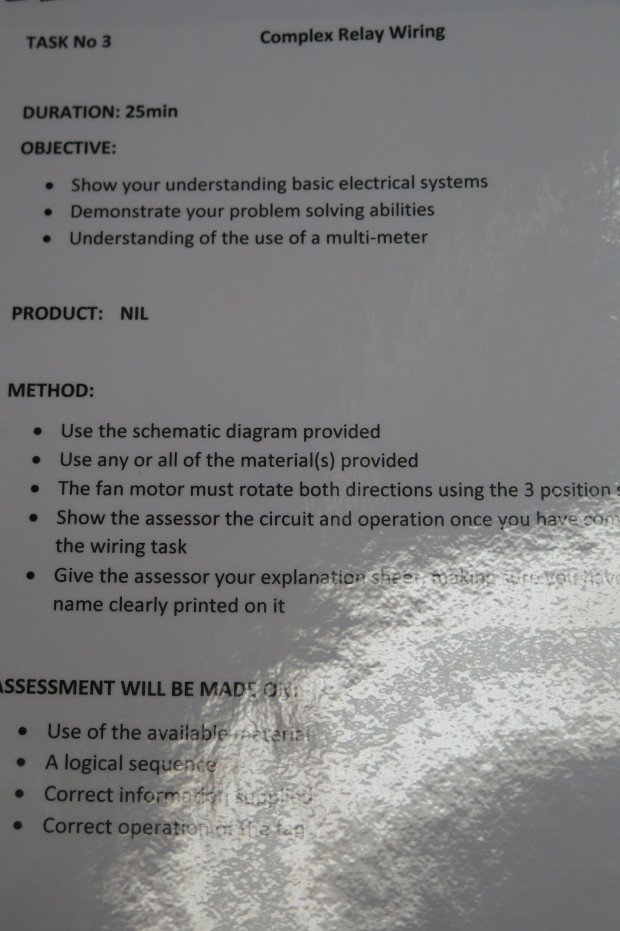 I can only demonstrate “problem solving skills” by breaking things until the problem is no more.

Each year, Yamaha Australia runs a series of competitions for its techs, the best of whom end up going into the regional finals, which are held at Yamaha HQ. The winner then goes to Japan to face off against 35 of the best Yamaha techs in the world.

And while there are regional prizes for the winners, there is only one prize for the ultimate winner.

The honour of winning.

And that is so damn bushido it makes me want to put on thongs and kill dark ninjas with my gleaming wakizashi. 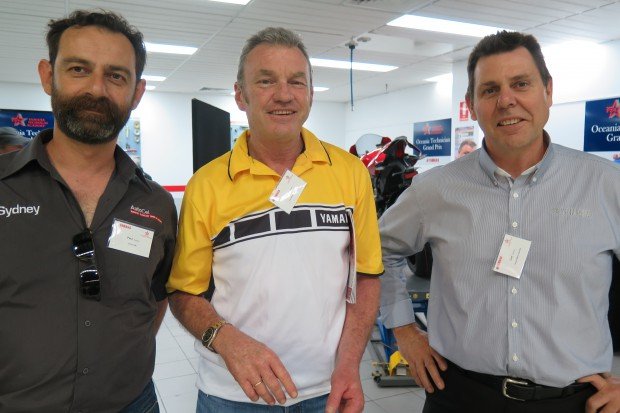 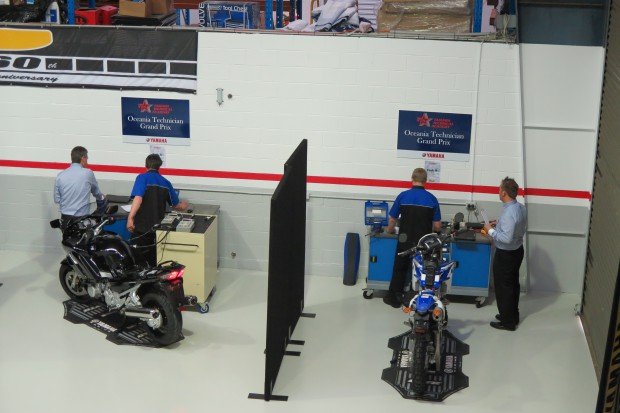 What you cannot see is the tension. But it is there. 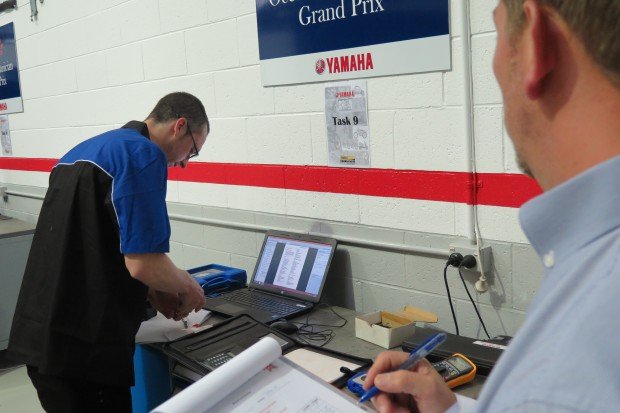 Every move you make, every key you strike…

Oceania’s representatives have done well in past years. Mark Sullivan of Bike Biz took out third place in 2001, and in 2003, Richard Hair of Inskip Motorcycles won the competition. Since then only Greg Slattery of Pitman’s Yamaha has been on the podium (2007), though Oceania had competitors at the Japanese grand finals in 2012. And in 2014 Jeremy Read from NZ took first place in the Customer Service section of the comp.

Just how tough and hard was a singular pleasure to behold.

On the day of the Oceania finals, there were nine techs…

Each had to, one by one, complete ten task in an allotted time. A scorer stood silently over the tech’s shoulder the whole time with a clipboard, and marked him as he went along. 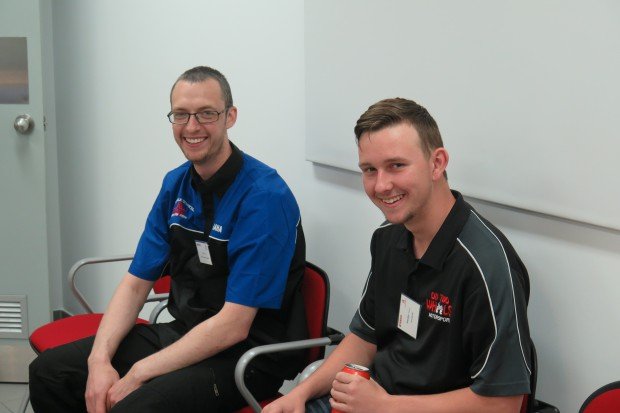 Tim Dowbnia (runner up) and Brenden Williamson manage a grin during lunch.

I could not imagine a more intimidating, pressure-filled scenario. Clearly, Magee and I were not helping the situation because we were wandering in and out among the stations with cameras, and stuffing our faces with yummy food. But we did not dare speak. The techs competed in sepulchral silence. It was like a holy thing and it was quite amazing to watch.

At the lunch-break I asked a few of them how they coped with such pressure. After all, I did not see one tanty, or a single spanner fly across the room and smash a light fitting.

“You just need to have the ability to put it out of your mind,” one grinned.

“It’s no different to having a customer staring at you in the shop while you work,” another shrugged.

But the pressure does get to them. It’s like exams at school. Some of the smartest kids don’t deal with exams. They know the answer but just can’t cope with the competitive broiler.

That would explain why some of the blokes competing in front of me where having their second and third crack at the title.

Carl Rollinson, the bloke who runs it all, told me that: “Some of them do better the second time around because they know what to expect.”

That evening, at a big dinner, the winner was announced.

It was Roly Orr, a genial bearded fellow whose eyes sparkled throughout the day as he bent to his tasks. It was his second go at it.

The runner-up, and I understand it was close, was Tom Dowbnia.

Roly is now on his way to Japan for the Grand Final.

The honour of winning awaits him.

But there cannot be any disgrace in a defeat at this level. 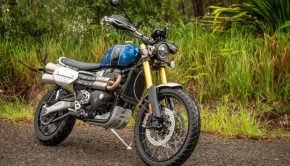