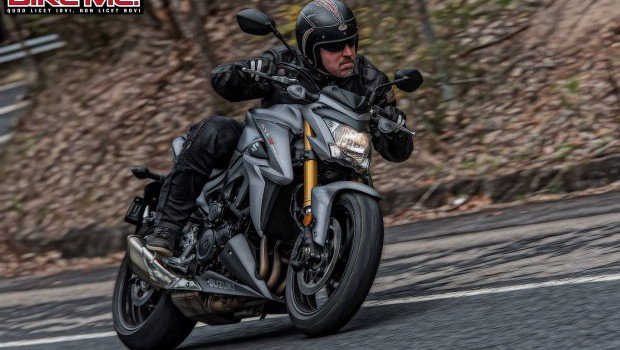 Just quietly, while the Italians and the Germans were busily constructing motorcycle marvels of electronic sophistication and sorcery, Suzuki took a deep breath…and dragon-kicked them in the throat.

When I first heard about the new GSX-S, I was cynically indifferent. I got even more indifferent when I saw there was an SF version with a full-fairing.

Meh, I thought to myself. What’s a bet this is just a watered-down version of the GSX-R? 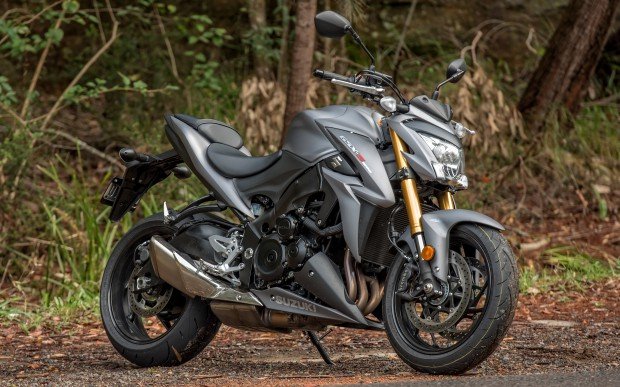 It’s glorious in grey, but it also comes in red and black, and blue.

Good thing I didn’t actually bet any money with myself. The settlement of selfie gambling debts is kinda tricky.

And I really should have known better than to make such a call.

First, you must ride the bike; only then you may sit in judgement upon it.

Each time I rode it somewhere I’d get off and look at it in wonder.

“How good is this thing?” I would ask myself. If there was no-one around, I’d say it out loud.

I no longer mutter out loud when there are people around. It only upsets them. 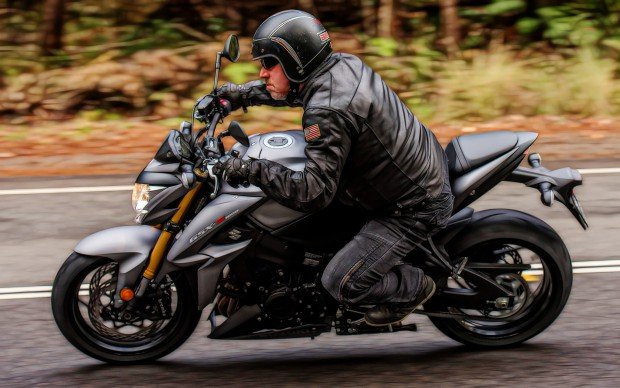 All that’s lacking is sponsorship on my leathers. And skill. Bike goes good, but.

Then I would ride it some more, push a little harder, then pull up and ask the same question.

I didn’t expect it to be anywhere near as good as it was, which is why I’m a little gushy about it. It’s like I’m trying to make up to it for my initial cynical indifference.

And it reminds me of my good-for-nothing youth. A lot. 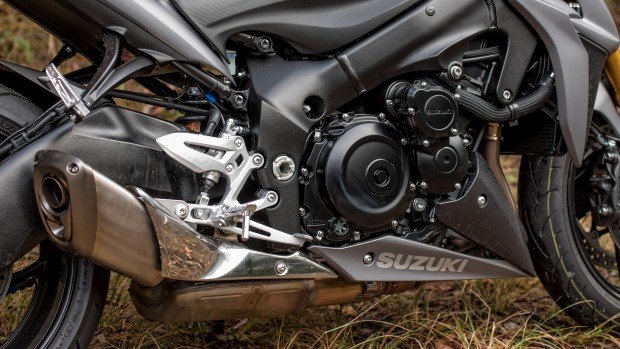 I like bellypans. But that exhaust could do with a bin. That said, the stock bike sounds quite good, actually. I’d still change the pipe, but. 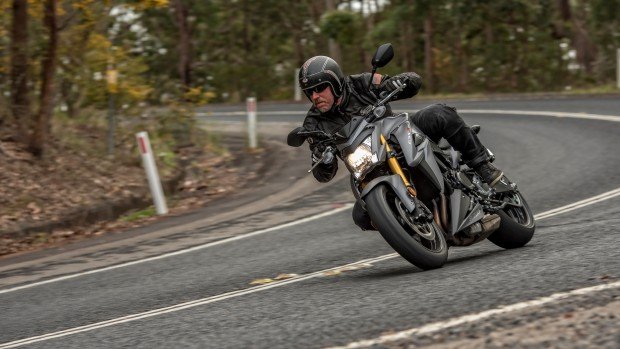 May they rot in Hell for making this road a 60km/h zone. Which is the speed I’m doing.

Yes, I am an old GSX1100EX owner. I have worshiped at the GSX altar long and long. It’s what I cut my teeth on and the bike I first lost my license riding.

I spent two weeks on the S, and two weeks on the SF. I did a lot of commuting, some night rides (BTW, the GSX-SF has these beaut LED lights on the sides of its fairing which chuck light out to the sides and help you see the dark parts of the corners the headlights never reach. The KTM Super Adventure has LED in its fairing too, which are activated when you lean into corners. The GSX-SF’s are on all the time), and four weekends’ worth of fanging.

We spent some quality time together.

And some of that time was spent wondering what the repayments would be on a 15 grand loan.

When I wasn’t trying to talk myself out of buying it, I was riding it around like a teenage fool.

Of course, the 2015 GSX-S is light years removed from my old GSX1100EX, but the Suzuki DNA is undeniable and ever-present.

I indulged myself and stroked at my memories like a grinning, maudlin swine. I reminisced by riding around my teenage haunts, and even made a lunatic run to Watsons Bay in the middle of the night like I used to do in the Bad Old Days.

I was much, much faster. I know because I timed myself.

There was just no getting around it.

The GSX-S is a superb motorcycle. 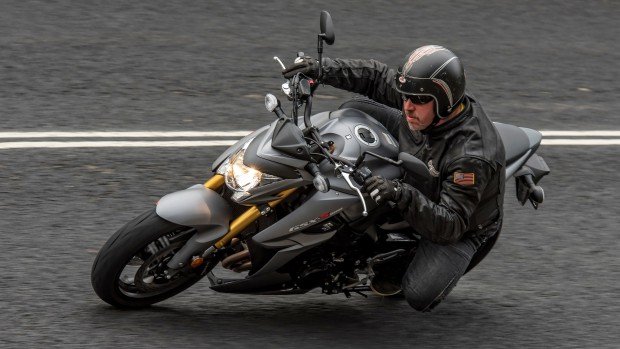 The headlight is reasonable, but more lumens are always welcome.

So what makes it so bloody good then?

It is not just a Gixxer with its fairings ripped off.

It was specifically designed to be what it is – a naked weapon of a motorcycle.

The frame is new and lighter than that of a Gixxer, but the swingarm is the same.

Now take one K5 long-stroke motor and the throttle bodies off the K7 donk. Put in lighter pistons, port the cylinder head, add some slightly less aggressive cams, lighten the rods, bung in some Iridium plugs, and add an all-new gearbox with different ratios, and you no longer have the searing top-end of a GSX-R.

You have, in fact, something much better and more useable, for my money; a bottom and mid-range that’s fatter, meaner and meatier than one of them giant families you see crying on The Biggest Loser.

What you have is a motorcycle that is a sheer enchantment to ride and ride hard. Or just commute around on in sixth gear, no mess, no fuss, no strain. The engine is the very definition of ‘tractable’.

What you have when you dial it up a notch or five is pants full of happiness and a brain full of beautiful intake noise. And possibly police sirens.

I initially found the throttle action a little…erm, continental. A bit light-switchy, if you like. But then I simply stopped imagining things. The throttle response is sharp. And that’s not a bad thing.

The suspension on its standard settings was spot-on. None of the roads I rode it on challenged the bouncers very much at all. Around town, it’s excellent. Sure, it’s not Ohlins. But then you’re not paying for Ohlins, are you?

The GSX-S is meaningfully grunty and well-mannered, while offering you a gearbox that knows no peer, and needs no quick-shifter. Sure, it’s nice to have a quick-shifter. It’s also nice to go out with teenage strippers, until they get old and start leaking around the seals. Then not so much. Suzuki build the world’s finest motorcycle gearboxes. Pleasure yourself by shifting manually through them. Like a man.

Look, I’m not dissing the GSX-R sportsbikes. I’ve ridden all of them. I know what they are and what they’re meant to do. I also know that I would never buy one because of the physical compromises that riding position forces on me. If I’m not comfy, I’m not riding as well as I should be. I’m too busy being uncomfortable. 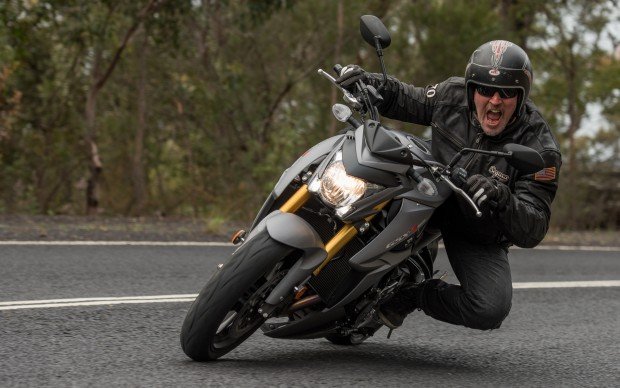 This is me being comfortable.

I’m comfortable on the GSX-S, and it therefore follows that I would be faster on it than I would be on the GSX-R. I don’t spend enough time on a racetrack to need anything other than a naked bike. Nearly all of my riding is commuting, touring, and weekend scratching.

If the GSX-R was the same price as the GSX-S, I would buy the S over the R every time. That it’s somewhat cheaper (a GSX-R is $20K) – an eye-opening $14,990, is quite enticing. The faired version, the GSX-SF1000, is $15,790. It comes with 15ml more fork oil in the front end, which makes a noticeable difference in the sharpness of the steering. So I would be adding that extra oil to the forks of the S.

I shall be blisteringly honest here. I do not believe you can buy a more engaging and fulfilling new bike for that price.

And its rider engagement comes from its lack of electronic wizardry. Interesting, huh?

All it has is ABS and a three-stage traction control system.

No engine modes, no launch controls, no three-letter acronyms that deal with every imaginable variable a top-end racer might encounter in his fight for a podium. 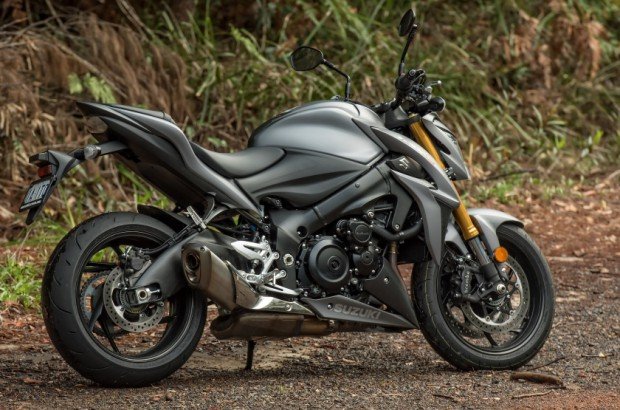 The GSX-S is…well, raw. And pure. It’s got just enough electronic stuff to make it less likely you’ll arse yourself into a truck in the rain, and the rest is up to you and your right hand. Much as the Road Gods have always intended, I like to think.

No slipper clutch. No launch control. No lean-angle sensors speaking to the brakes.

I’m not raining on the computerised wizardry parade. I love that shit. It’s great. And it works. But you do have to pay for it. And for a lot of riders, four engine modes, seven traction control settings, and five ABS modes, are just pointless.

I’m one of those riders. Yeah, I admit it. I fool around with all the electronic stuff for a day or two, make eeping noises like a stone age cannibal beholding modern technology for the first time, find my happy place among all the modes, then forget about it.

I found the sheer basic-ness of the GSX-S very satisfying.

It was simple. I am simple.

But it was just brilliant to ride thanks precisely to that simplicity.

I am an advocate for top-end motorcycle technology. I am in awe of how good the computerised rider-aids are these days.

It’s wondrous sorcery, no doubt about it.

This sorcery exists in the GSX-S1000.

But there’s not a lot of it.

And that’s just the right amount for so many riders, including me. 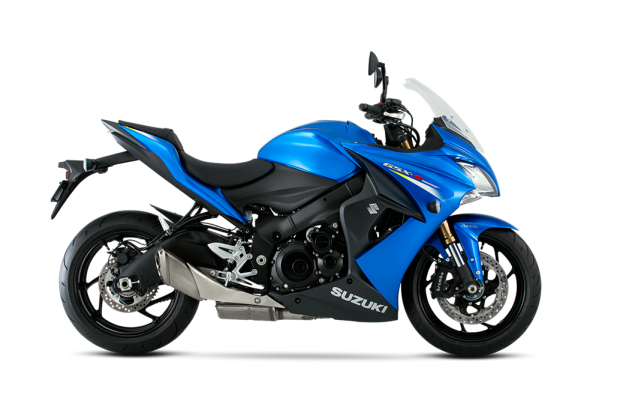 This is the GSX-S1000F. It comes in blue or grey, and has an extra 15ml of fork oil, which makes it turn in even better than the already agile S. Go figure, huh?

To Nick Eddard at Half Light Photography.

His work is, as always, outstanding, and yes, you can get in touch with him HERE and he can photograph you.

Oh, here’s the video Boon and I made…