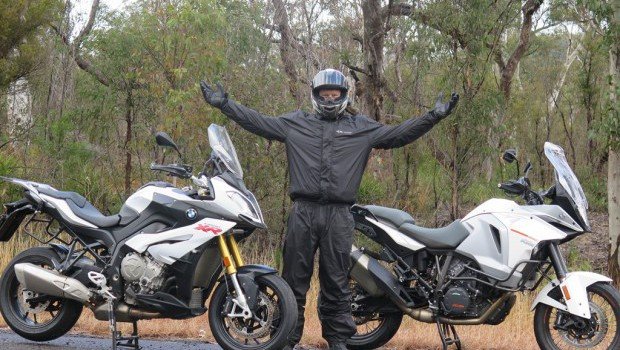 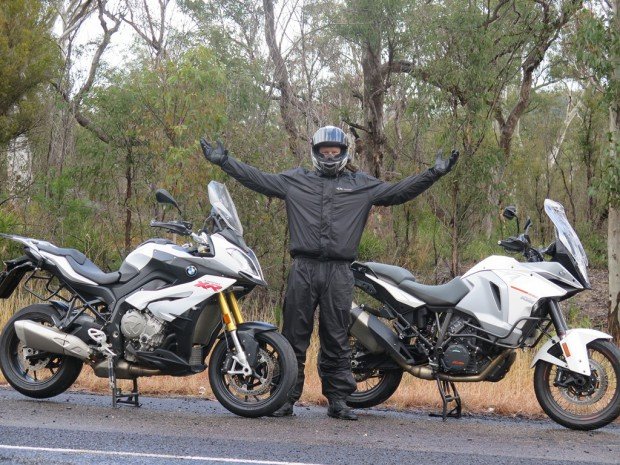 Boon has the hands of a strangler. Big, grimy, meaty digits protruding from paws the size of dessert plates. They hold a schooner of beer like a murderer grips the neck of his victim.

He is staring through his beer and I am staring at his hands.

We had just fired the KTM Super Adventure and the BMW S1000XR up and down the Putty Road in the pouring rain. And I do mean ‘fired’. We both stank of damp wet-weather gear and illegality. Staring at nothing and everything was what needed to happen right then. We had stuff to talk about, but talking would come later.

The road had been empty. It was raining and the usual Sunday crews of wobbling motorcycle rubbish that bedevil Sydney’s favourite motorcycle roads were all at home. Much like the Highway Patrol, who doesn’t hunt much in the rain.

Which is pretty much why were out splashing in the puddles.

“So which one do you prefer?” I asked Boon.

“Both of them,” he replied.

“Which one would you own?”

“Which one is better?”

I nodded. We resumed sitting in silence. He kept staring through his beer. I kept staring at his strangler’s hands.

His three-word reply to my questions was entirely appropriate and correct. I felt the same way.

For the first time in my motorcycle-trying career, I was unable to decide which of the two bikes I was riding was the better one.

For what it is worth, this is what they look like on paper… 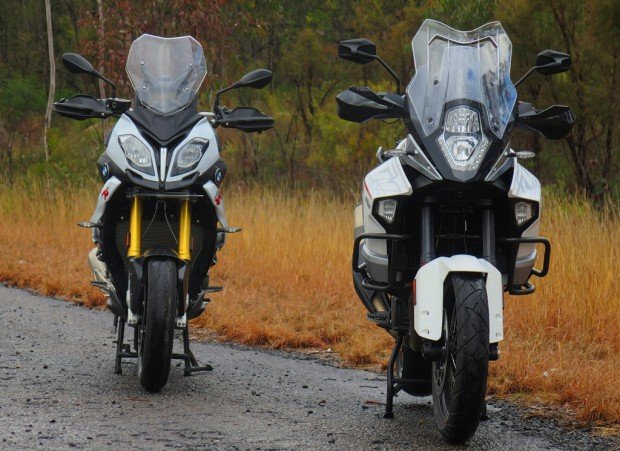 The faces of conquest.

They both come with an alphabet of electronic rider aids. They both boast a pedigree of top-quality finish and performance. They are both at the very top of their game.

And I cannot tell you which one is better. I wish I could. But I can’t.

The KTM is a very different bike to the BMW. But it is not better. And neither is the Beemer better than the Katoom.

What they both are is spectacular.

If they were not, Boon and I would be dead.

Please understand this is not a testimony to our riding prowess.

It’s merely an observation regarding the inherent engineered awesomeness that leaks from these two bikes like sweat off a marathon runner.

Shall I pause here and allow some of you to screech about electronic rider aids being “bullshit”, “ruining riding skills” and “defoliating the ice caps”?

I was once as you are. I laughed at ABS. I held Automatic Stability Control and its computerised ilk in contempt. I even felt that Slipper Clutches detracted from the visceral flavours only full-bore psychotic compression lock could deliver.

I am no longer so stupid and ignorant.

Anything that helps me ride faster, better, and harder, is to be embraced like a fluffy teddy bear.

Anything that ensures my high-speed entry into a decreasing-radius, rutted shit-bend that’s wetter than a drowning walrus, does not suddenly become an earth-sky-earth-sky-girl-noises thing, is simply wonderful. 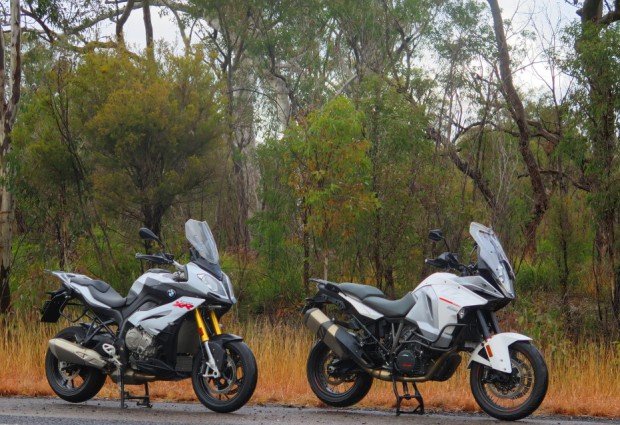 Resting between spasms of fury.

Boon is of a like-mind. He is 25 years younger than me, and is nowhere near as polluted as I am, but in this, he thinks as I do. Most motorcyclists with a lick of sense also think this way.

By all means enjoy your mid-90s Ducati with the race pipes. I will enjoy it as well. As I hammer past you at twice your speed. We can compare notes at the next pub after you’ve stretched the kinks out of your spine and told yourself you’re riding a “real” bike, as opposed to the two cavorting loons on them new-fangled electronic motorcycles that do all the riding for them.

On the wet Sunday Boon and I rode up and down the empty Putty Road, there were no better bikes on this planet than the KTM and the BMW. And they didn’t ride themselves.

The differences are readily apparent.

The KTM is a vastly energetic and eager twin. The BMW is a screaming power-filled four. The BMW’s ride is firmer, but every bit as sure and certain as the KTM’s. The KTM boasts more torque and fires harder out of corners, but the BMW’s delightful quickshifter negates any advantage it might have there. They both do everything really well, but differently.

The riding positions and comfort-levels are similar. Their behaviour under brakes is similar. They both tip into bends willingly, hold their lines with determination, and forgive you your trespasses with grace.

The BMW’s mode-switching thing is more user-friendly than the KTM’s, and I’d rather have the BMW’s version of the heated-hand-grips control (a button on the switchblock) than KTM’s scroll-through-the-menus version.

But that’s the only thing I can find that splits them. And it is altogether meaningless when looking at the big picture. It’s a niggle, not a fault.

Would it stop me buying the KTM? Nope.

Would the buzz through the BMW’s handlebars stop me buying the Beemer? Nope.

Such is the motorcycling version of the White Man’s Burden.

That we are tortured by such amazing First World problems says much about the state of play in today’s motorcycle game.

We appear to be in a place where everyone is building good bikes, and as a result, manufacturers are now being forced to build great bikes.

What a time to be alive, huh?

The over-arching impression these two motorcycles left me with is simple awe. 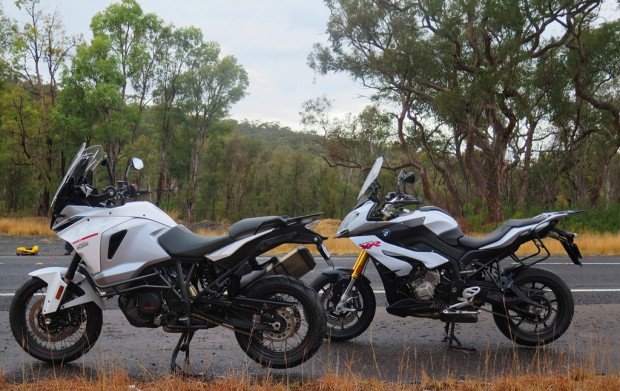 The knowledge that what you’re riding is so insanely capable is very empowering. A bike that can make you feel like you can conquer the universe is very special. No matter what the road surface, these two are up to it and up for it.

There are stunning sportsbikes out there. Specifically designed to carve up racetracks and shave tenths of seconds off your lap-times. But in the real world, where the road surfaces are questionable and variables lurk behind every tree, bikes like this are in a class of their own. And unbeatable.

Which bike is better?

The answer to that is: Which one do you like the most?

Your reasons will be your own. They cannot be mine or Boon’s because we just don’t know.

And I can make things even more difficult for us by shoving a KTM Super Duke R into the mix and following it up with the new Aprilia Tuono RR.

After all, I have to give Boon something to strangle with those hands of his.