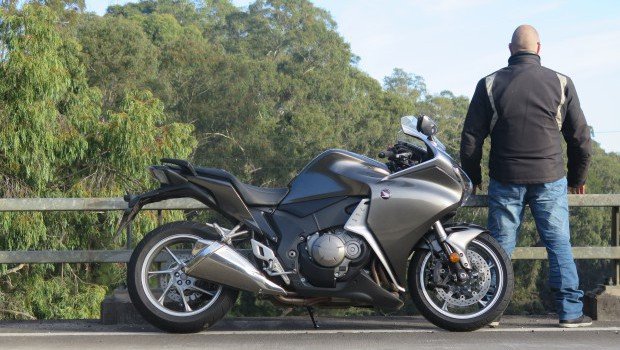 There is no doubt in my mind you have been told, repeatedly, that Honda builds “bland” motorcycles. The metric used to arrive at this deeply idiotic conclusion seemingly stems from the fact that Honda builds bikes so thoroughly well engineered they, somehow, become “bland” as a result.

This conclusion has always infuriated me.

The reasoning behind it is shallow.

Apparently, this reasoning goes: If a motorcycle is so well made and designed that riding it at its considerable limits does not fill you with molten terror, it is thus bland. And boring.

In a past life, I even wrote a column about it. This column caused great anguish.

This anguish pleased me. 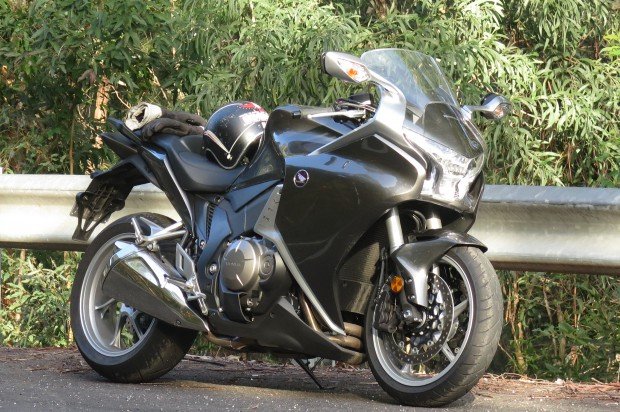 It looks most dignified in grey.

For it is not bland. I do not understand how that descriptor can even be used when referring to any motorcycle. If what you’re riding appears bland to you, turn the black rubber cylinder on the right handlebar until what you’re riding is no longer bland.

Yes, it is that simple.

Here, let me simplify it for you even further.

That amazing V4 engine produces 127kW (at 10,000rpm) and 129Nm of torque (at 8750rpm). And it does it in such a way that under 5000 grand, the bike feels…well, unassuming. It doesn’t feel at all like what it really is under its Mr Conservative VFR badges – which is a roaring superbike-class speed-fiend when you crawl up it. 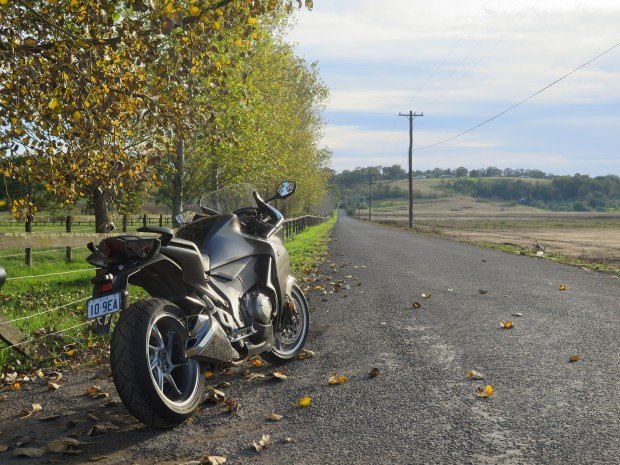 Those leaves were fluttering like a young girl’s heart when I took off a few minutes later. 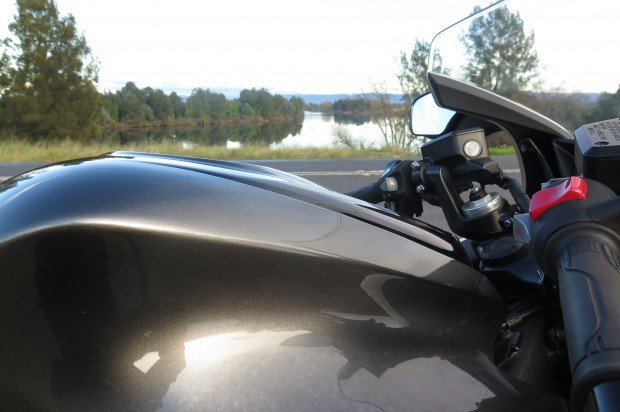 Yes, Honda knows how to paint a bike.

It’s a veritable Jekyll-and-Hyde transformation, but without the feral madness that Hyde brings to the table. It is, after all, a Honda. There is nothing wild, tetchy or crazy about it at all.

Which makes what it does over five grand so eye-opening.

Under five grand, all is sweetness and gentleness. There’s lots of low-range torque to keep you humming along around town in top. But go down a few cogs, send the needle north of 5000rpm and it’s like what happens when a stripper tears off her G-string. There is a deep, booming roar, everything starts to rock and you start to grin like a brute.

The exhaust system, which has valves that open up to deal with your evil throttle twistings, begins to growl with meaning. The fairing begins to work. The ever-so-slightly aggressive riding stance begins to make sense. And your licence begins to scream in terror. 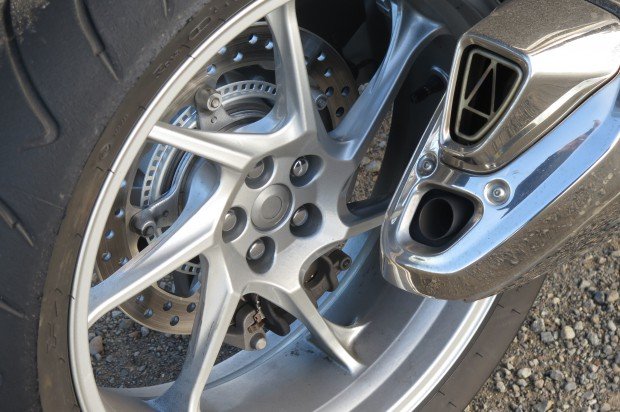 That is exhaust technology, pilgrims. There are valves inside the top one. They open when they need to and sing a fine and stirring song. 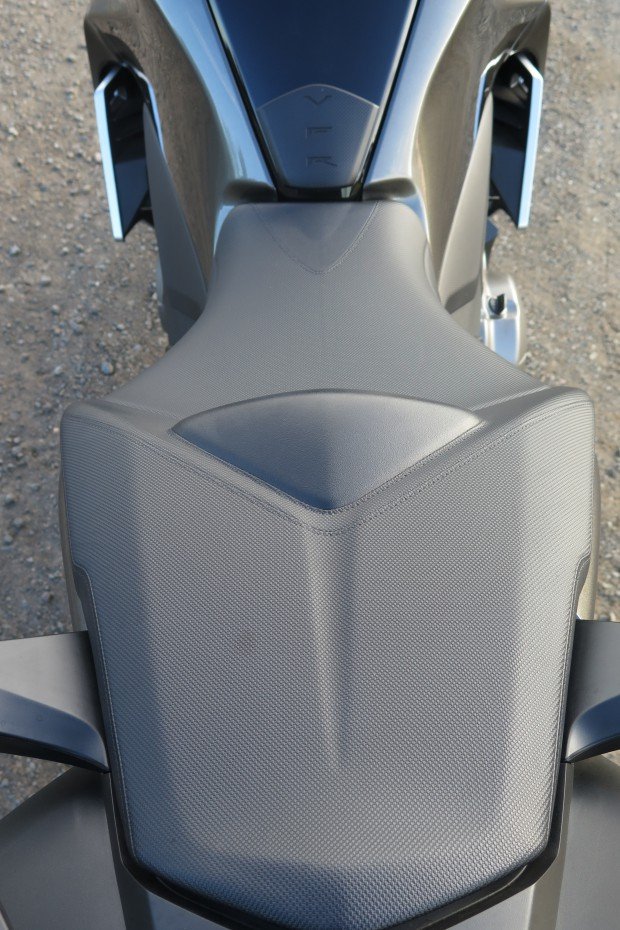 Madam may sit in comfort while Sir slides around like a mad racing swine. Great seat. 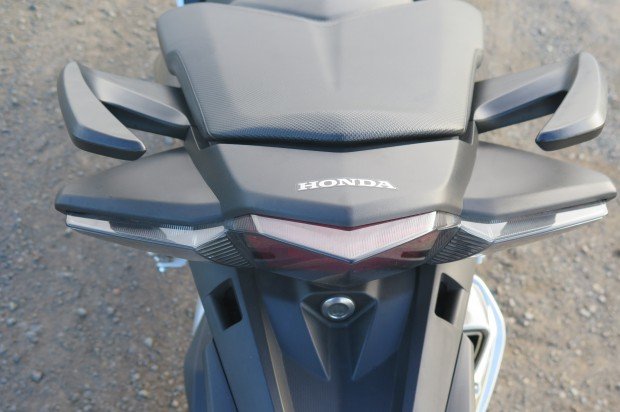 Madam’s chicken grips are also the top mounting points for the hard luggage you will get to carry Madam’s stuff in.

The VFR brought me closer to Highway Patrol handcuffs than I’ve been in a while. Such was my intoxication with the noise it made when I sent it over five grand.

I would do it over and over again – even when it was clearly not appropriate.

Yes, I have an addictive personality.

And it’s smooth. Oh great Gods of the Road is it smooth.

The rear two cylinders sit closer together than the front two, centralising the mass and removing the imbalance normally inherent with the symmetrical right-left cylinder coupling of such an engine. There is no balance-shaft because none is needed. Honda have then added a phase-shift crankshaft with a 28-degree throw, which further reduces vibration and noise, and added four drivetrain dampeners.

Fuel economy is good if you’re good – but you will easily see a shade under 300km out of its 19-litre tank.

Rider ergos and the seat are spot-on for my size, but even bigger and bellier blokes won’t struggle. The seat is perfectly formed for smoothly sliding your racing testicles off when the going gets furious and when stuff has to be proved. 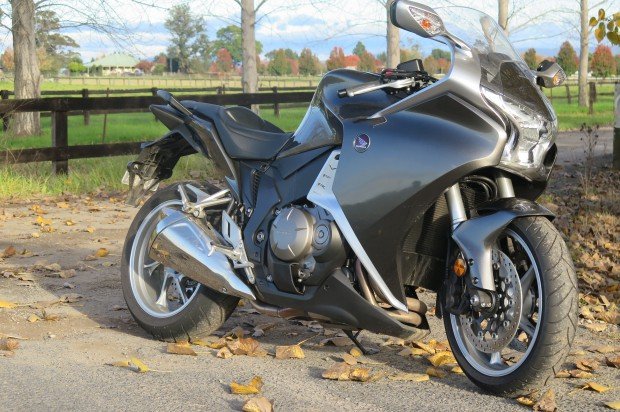 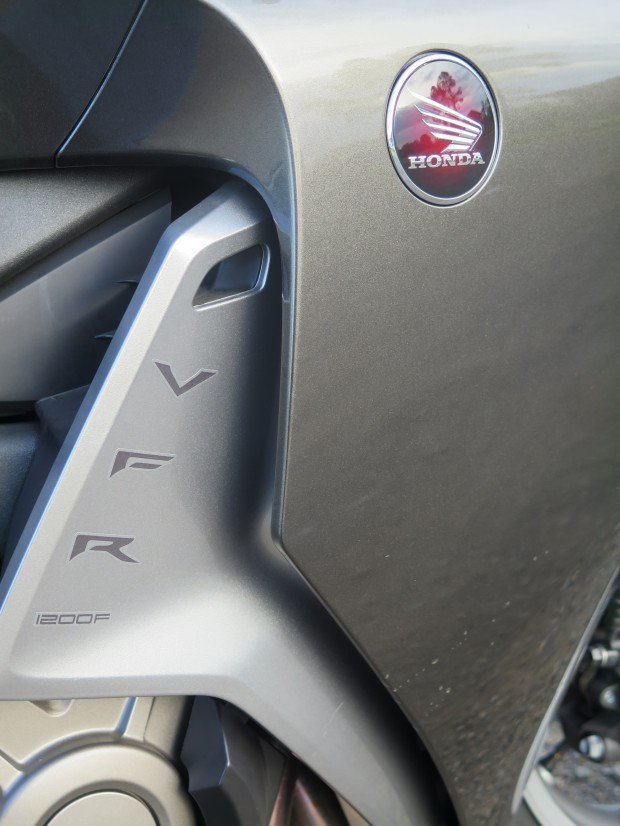 See? Layers. Probably to do with the flow of air. And dragons. 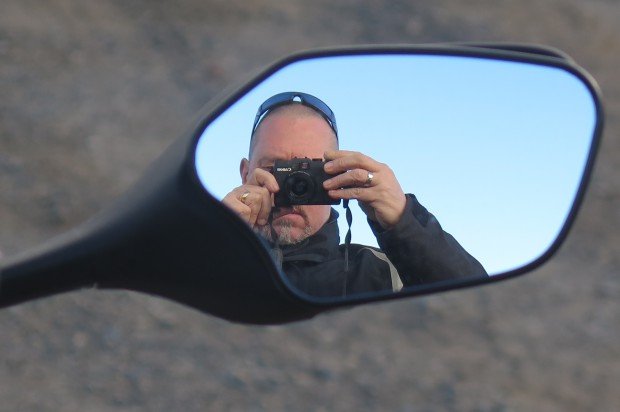 Mirrors work. How about that? What a time to be alive! 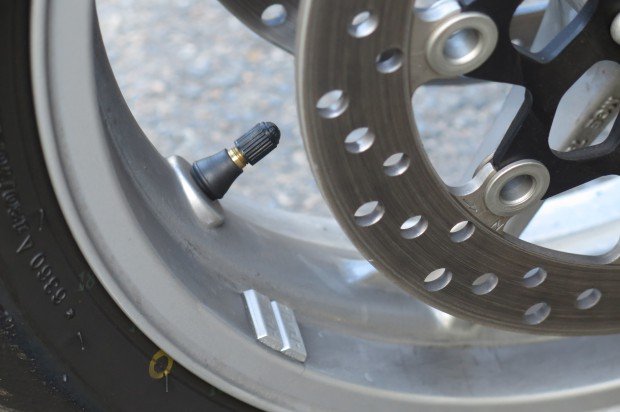 Would it kill you guys to maybe angle the valve stem outwards? Thanks. People in servos get all panicky when I’m struggling to shove the tyre gauge onto non-angled valve stems.

A slipper-clutch will also assist you when that times comes.

I greatly liked the sheer simplicity of the package. Traction control can be turned off via a switch on the fairing. No menus to scroll through. No confusing engine maps. You can see LCD readouts for average fuel consumption, remaining fuel and how far you’re gonna get with what you have. You get a speedo, a clock, an ambient temperature display, and a big analogue dial for your revs. Be content. What more could you possible need to stare at?

The shaft-drive is another paradigm of clever engineering. It’s offset and has a pivot that goes up and down as well as a sliding CV joint that compensates for the changes in length that happen when the wheel is travelling through its arc. As you’re banging it over bastard goat-tracks, of course. A clutch dampener at the output shaft absorbs drivetrain lash, and thus is more smoothness delivered unto your hands.

The Pro-Link shock at the back is adjustable for damping and the 43mm USD forks can be tweaked for pre-load. The suspenders are more than adequate and the VFR, like all VFRs, feels impeccably stable at speed, and extremely well-balanced and very willing to be turned into tighter stuff if the pace is quick. 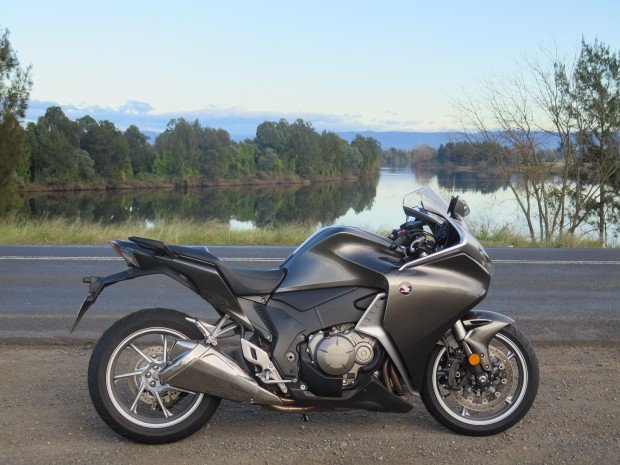 There’s a certain flow to the VFR’s lines. It’s like the river behind it. But more metally.

I even love the Combined Anti-lock braking system, which so appals so many…um, purists – which is strange since both the CBR1000RR and the CBR600RR have the same system.

Yes, the bike does some of the braking (front and back ) for you. But it’s not so’s you would notice it happening. Unless you were contending for the podium and Laguna Seca. Then you might notice.

It works and it works seamlessly. 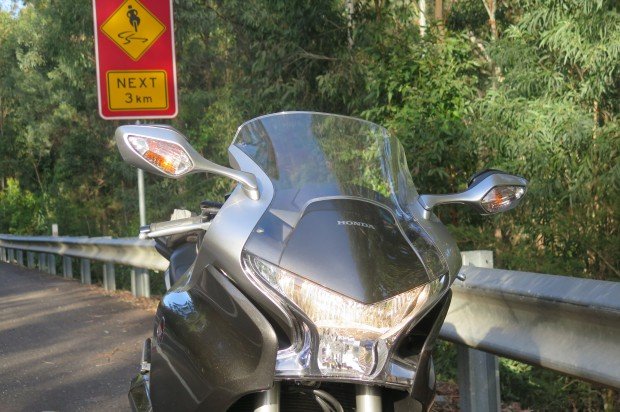 There is an awful lot of headlight out front, and that is a great and good thing at night. Finally, I am getting through to the manufacturers. 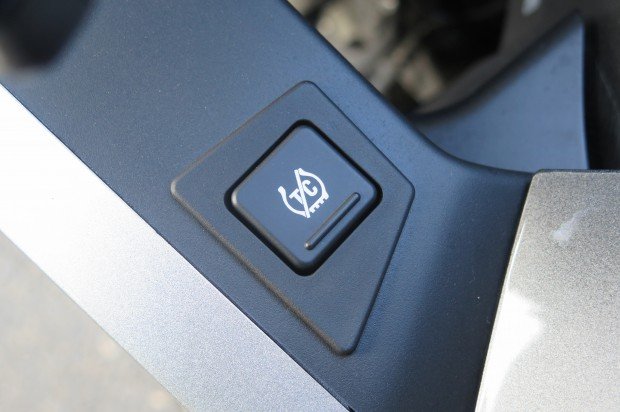 Simple and easy to find. 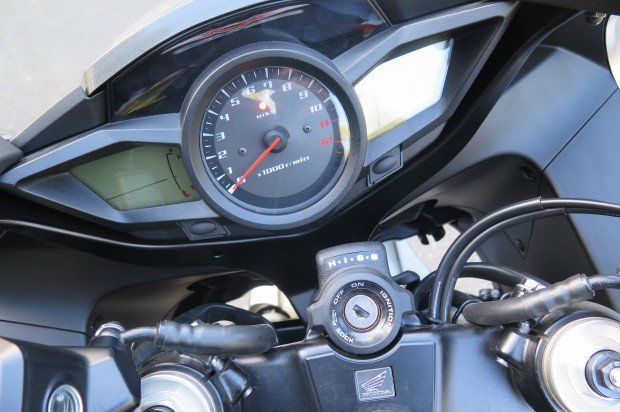 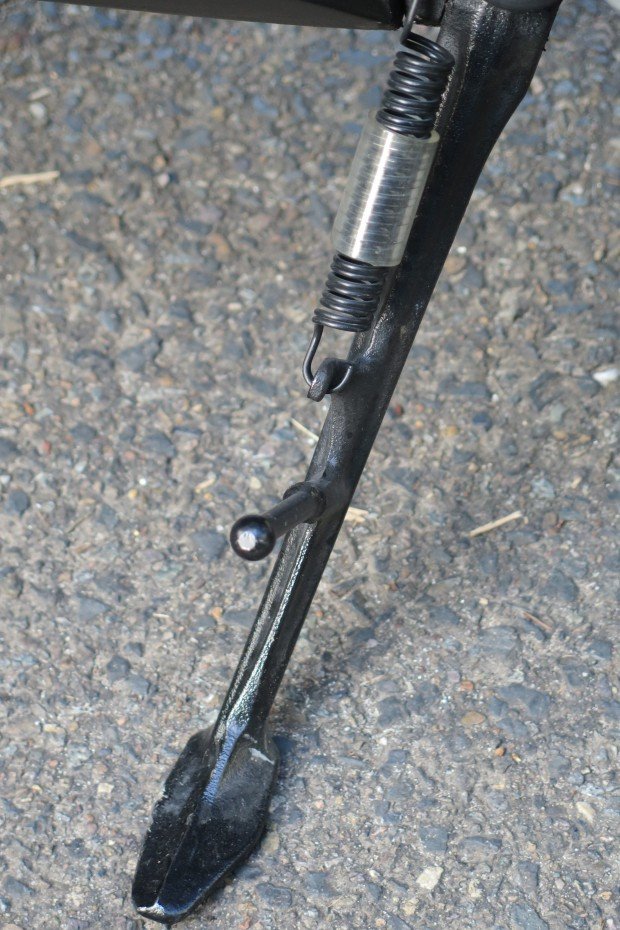 A clear plastic tube covers the side-stand’s return spring. No. I do not know why. Could be something to do with dirt. Or monkeys.

The combined result of all this engineering is a motorcycle that is very easy to ride and ride very fast. It will not scare you. You can only scare yourself. Will it thrill you? Of course it will. Its handling is impeccable at any speed, and most riders will never even approach the VFR’s considerable limits.

If you’re going to tour, there is an integrated luggage system available. The mounts are already there. And if you’re going two-up, the pillions comfort is adequately addressed. Or so I’m told. I don’t get on the back of bikes at my age.

It comes in red, white, grey and black, and you can fit it out with Honda heated grips or put on a narrower and 25mm lower seat if you’re a dwarf. 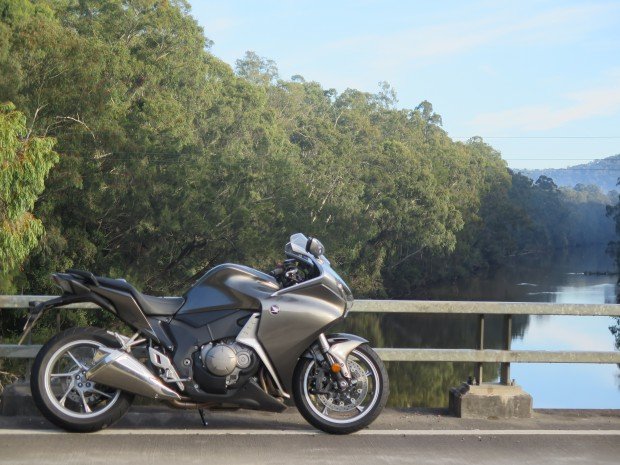 It’s a very satisfying and complete package. These were near enough to $25 grand when they came out in 2010.

They’re selling new now for about 18-19K. Yes. Most satisfying.

Now then. This Bland thing. Heh. Piss off. More like Beaut. Why would you not want a bike that is predictable, stable and sure-footed – and powered by some staggering missile-like two-phase engine?

Oh, that’s right. You want to make sure your daredevil, take-no-prisoners, journo-credentials are on show.

Yeah, well, I don’t have any of those. 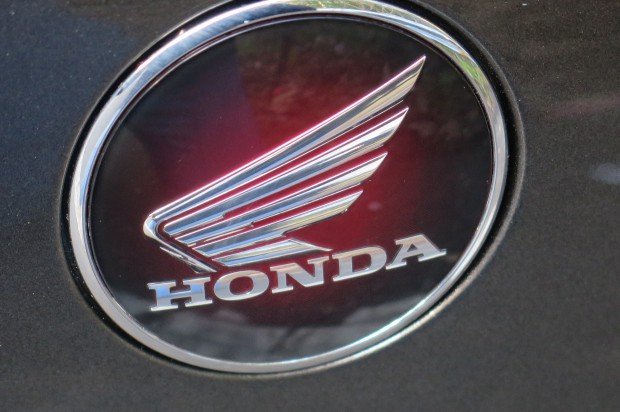