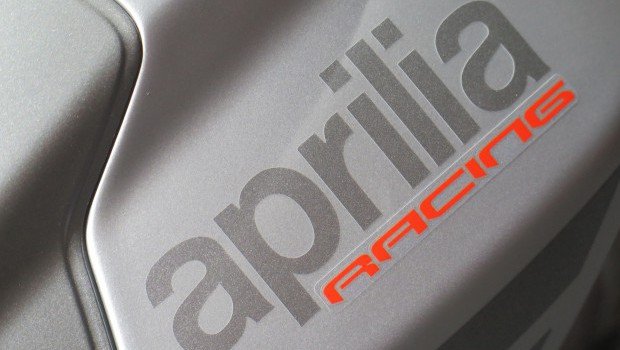 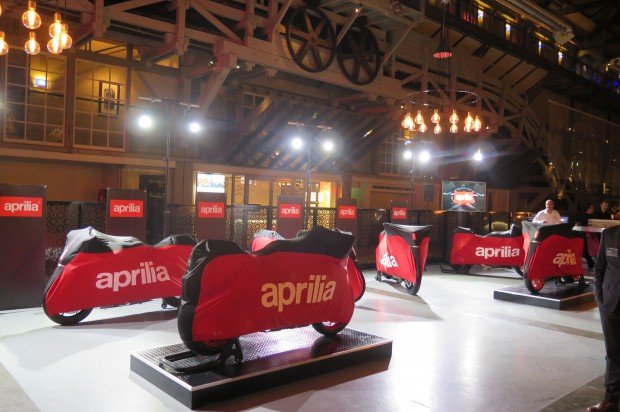 I tried to do upskirt shots, but they yelled at me.

I spent a most pleasant evening in Russell Crowe’s basement positively turgid over Aprilia’s latest offerings.

Russell’s basement is, of course, the Blue Hotel at Woolloomooloo – a reinvigorated wharf where slaves were once offloaded to serve the needs of the British Empire. These days, Russ has an apartment in the complex, which is only right and proper for an actor and musician of his calibre.

As the new Aprilia’s were unveiled, I am not ashamed to say that I offloaded a little myself. In my pants.

Gleaming with subtle menace were the 2015 Tuono V4 1100 Factory and the Tuono V4 1100RR. Next to them were the RSV4 RR and the staggering RSV4RF Superpole. And if you’re wondering how this particular Italian manufacturer was going to respond to the advent of Yamaha’s race-intended R1 and R1M, then wonder no longer. This is a serious counterpunch. Aprilia’s racing heritage is by any measure glorious and it is clear it wishes to capitalise on its 60-plus world titles with these latest offerings.

All I can do at this stage is offer you numbers. No-one has ridden any of these monsters yet, but that will happen within the next month. Or so I was promised. And since the beaut folks at Aprilia over in Revesby don’t need to deal with a siege situation, I am sure that promise will be honoured.

So the Tuonos, yes? Yes. 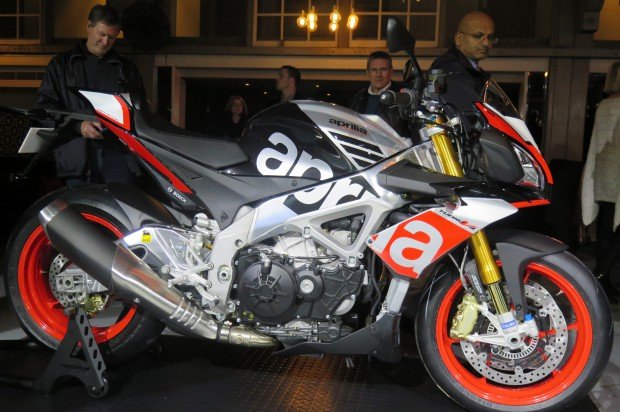 I’m so pleased they stopped painting the wheels blue. 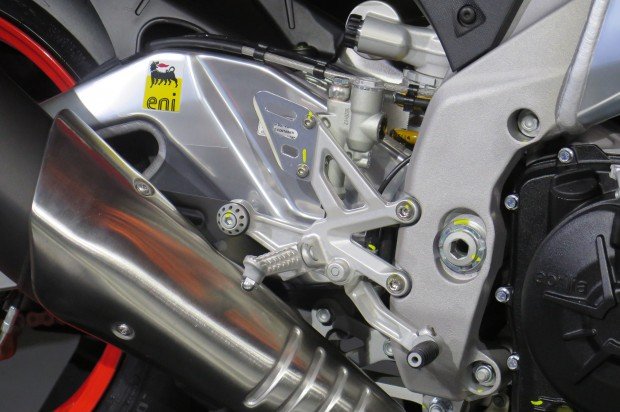 Yes, you can get different rear-sets. Then you can dip these in amber and hang them on your wall. 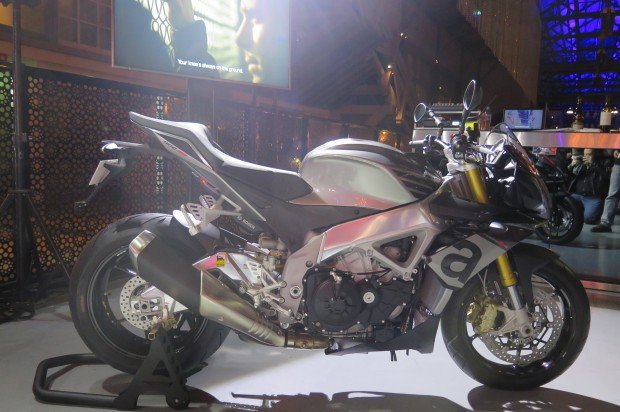 The not so silent Grey Fellow. 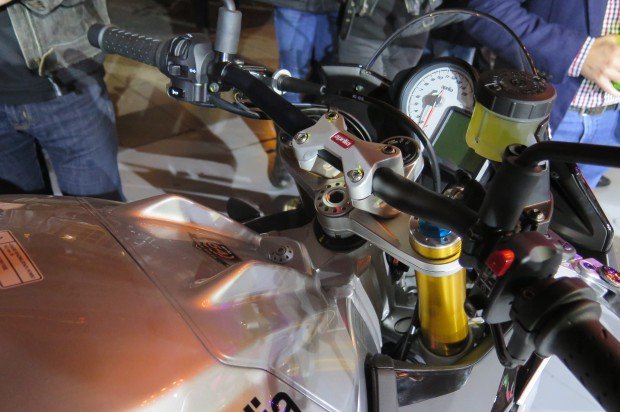 The bars are narrower, to allow even more exciting lane-splitting.

The swingarm has been lengthened and the state-of-the-art Brembo M432 Monoblocs are straight off the racetrack. As are the electronic acronyms that have been uploaded into its computer so that you can actually ride like the god you think you are.

The Aprilia Performance Ride Control (APRC) package consists of adjustable traction control (ATC), launch control (ALC), wheelie control under zesty acceleration (AWC) and a quick-shifter (AQS). The Race ABS is from Bosch and is also the best you can get without inserting yourself into a factory race team and yelling at your mechanics in Italian.

Intriguingly, the three engine modes no longer even refer to the road. You have Sport, which is 175 horses being delivered to you in a “gentle” way, Track, with all the throttle openings opening, and Get Your Balls Out (Aprilia calls that mode ‘Race’) with minimal engine braking and the fly-by-wire throttle being entirely your bitch.

The seat has been lowered 15mm and is said to be more comfortable with a new type of foam. My only concern is that my bottom will be able to digest it it when fear causes it to eat the saddle it is sat upon.

Dry weight is 184kg. A man could almost bench that and could certainly deadlift it.

There are two iterations of the Tuono. The normal RR, which comes in Donington Blue and Portimao grey, and the Factory Superpole which comes painted and armed for war with Ohlins bouncers.

Then there’s the RSV4RR and RF. And now we’re going racing. 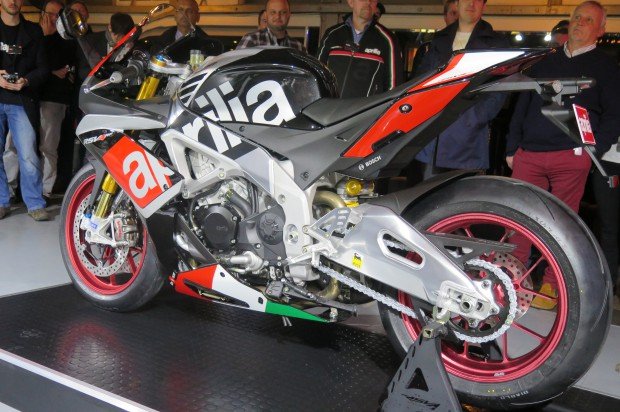 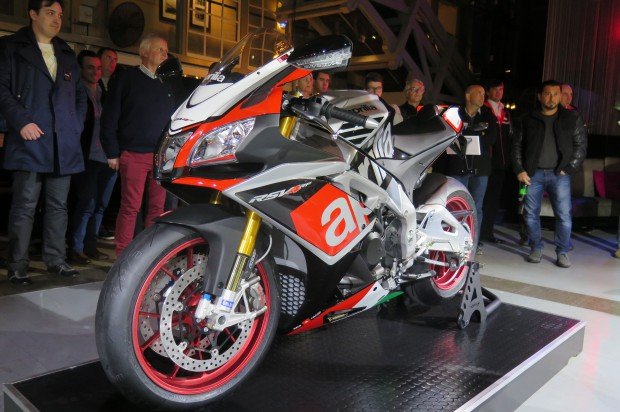 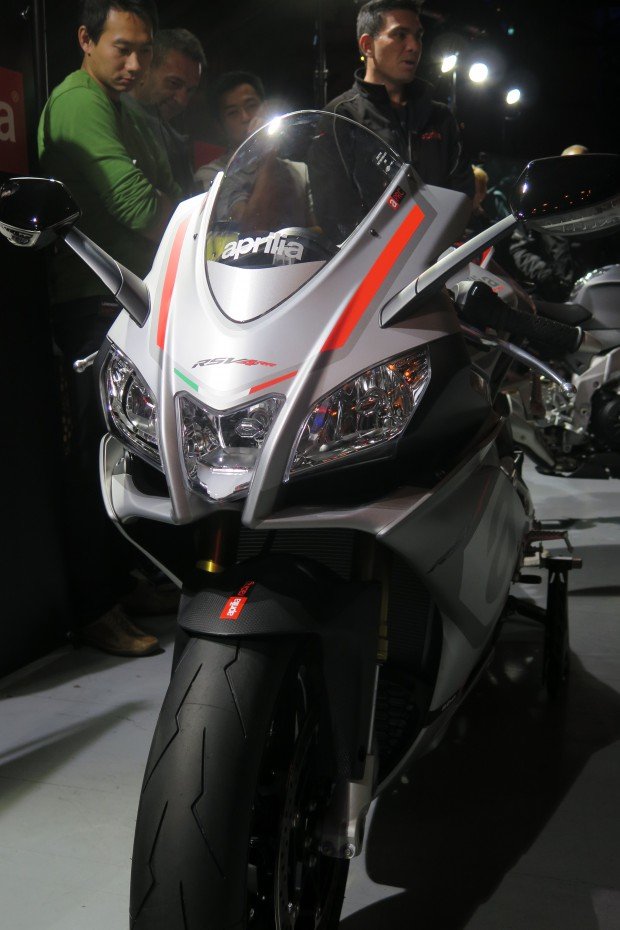 New lighter lights that have been LED’ed like a nightclub.

The RR comes in Ascari Black or Bucine Grey. Or you may decide you wish the RR Race Pack which is only available in black. Or you may decide that life is short, and yours can only be complete by wedging yourself onto an RF Superpole.

Decisions, decisions. Five boxes of tissues at a minimum.

The numbers are eye-opening. 201 horses and 115Nm. 180kgs dry. It’s the most powerful engine Aprilia has ever built.

The electronics of the Tuono are all here as well, and with the top-of-the-line Factory, you replace the Sachs bouncers with fully adjustable Ohlins magic, but you get an Ohlins adjustable steering damper and forged aluminium wheels. The gearbox is a cassette-type so you can really wow the bastards at track days when you start swapping out the gear ratios.

I needed some time alone in Russell’s basement toilets.

By all means go HERE and look for yourself.

I’m going to find a comfy place to sit and wait in Revesby.