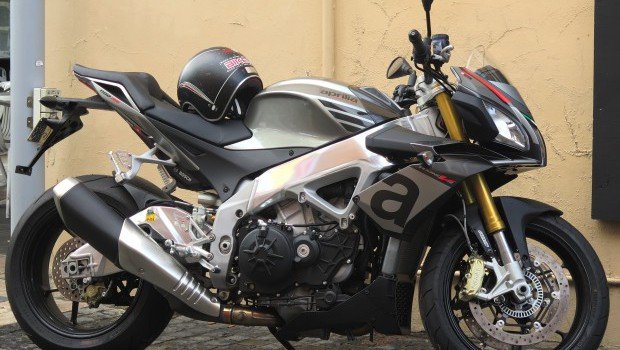 A rumbling, melodic threnody of power.

It is the sound of mechanical ecstasy being venomously detonated just below your balls, and when it’s booming, you are flying.

I hear it in my sleep.

It is a sound like no other. And no other motorcycle makes it.

Only the Tuono RR makes it.

Only the Capo di tutti Capi makes it.

Only the Boss of all the Bosses makes it.

And that is why the Tuono RR is my pick for the best bike of this year. 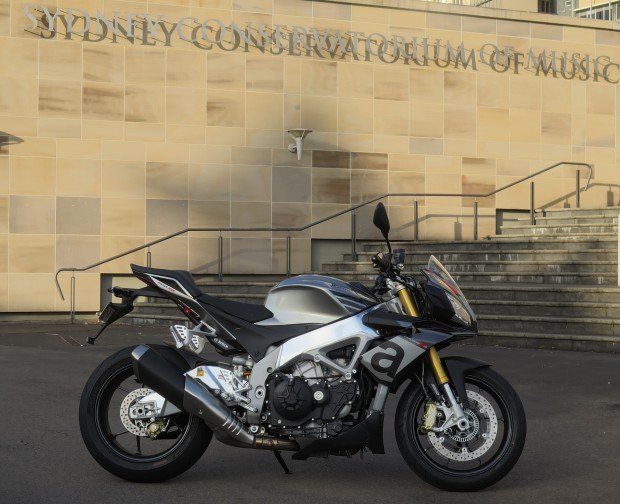 They would certainly appreciate its music here.

Of course there are other reasons, and I will get to them shortly. But the noise it makes, in totally stock form…well, hell…that alone is worth the price of admission.

From the second it detonates into life, you know it is something special.

By the time you’ve run it hard through the gears a few times on your private racetrack, you’ll be speaking in tongues and your eyes will be rolling around in your head like marbles in a wok.

The 65-degree V-four makes 175horses and produces 121Nm of torque. These are serious, eat-my-shit-bitch numbers. 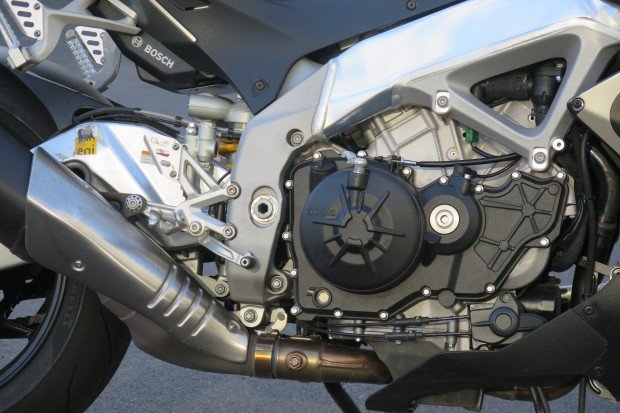 Ready to eat things? I think so. 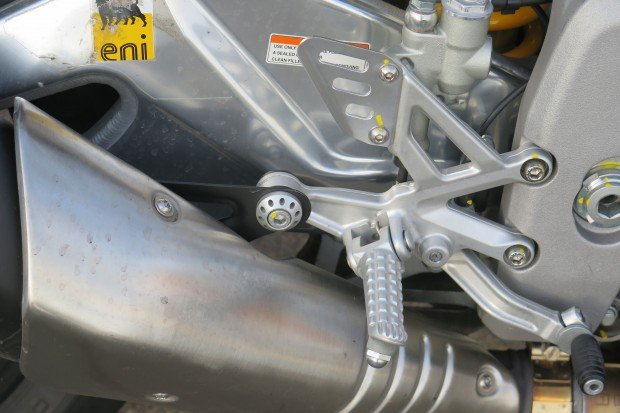 It’s still got its little yellow love-marks from the factory. Bless. And some stains from the tears of the vanquished that splattered gently upon its alloy. 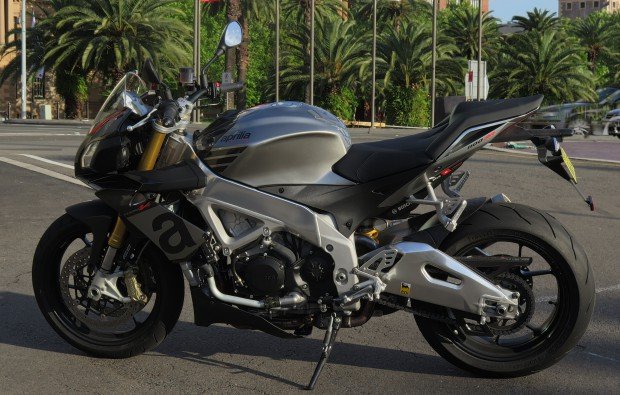 The side-stand is less terrifyingly pitched this year. For which I am grateful.

And they seem to be available all the time and everywhere in the rev range.

But when my brain stopped juicing its muck in ecstasy and I began to think clearly (this was sometime after the fourth tank of petrol), it was obvious how and where Aprilia had injected more bang into this new model.

The previous Tuono was spectacular. This one has upped the ante. It makes 20 more stallions at 8000rpm. And thanks to the bore being viciously gouged from 78mm to 81mm by what could only have been Thor’s hammer, the spread of low and mid-range torque has been hugely improved. And it was already great before that happened.

A new crank and sexy-as Pankl connecting rods now live inside the engine, and the Tuono also now boasts the full suite of the Aprilia Performance Ride Control (aPRC) package that was derived from the WSBK bike and wedged into this thing with demons’ pitchforks. It’s arguably the best electronics package around. But I’m not going to argue with you. It’s brilliant. And comprehensive. 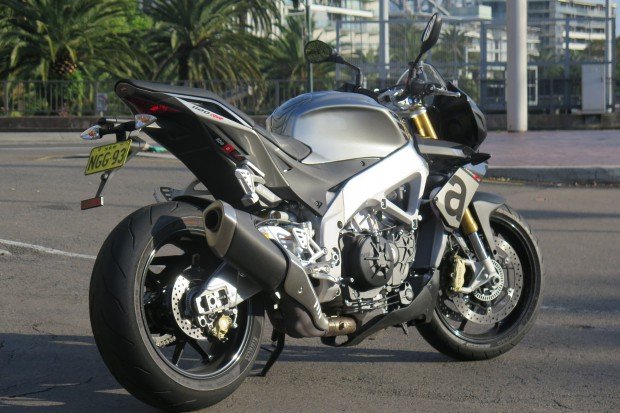 aTC: Aprilia Traction Control. Adjustable on the fly (without having to release the throttle) with eight settings. It boasts a new computerised  higher-performance operating logic; the percentage of slippage (or terror)  permitted differs depending on your speed in a bend. And how massive your cags are on the day. I liked it on Three when I was brave and Five when I was just not up to it.

aWC: Aprilia Wheelie Control. Three settings here: Look At This, Ladies!, Now We’re Drag-Racing!, and Shit, I Broke The Sky. A soft landing is guaranteed by the computer.

aLC: Aprilia Launch Control. Three settings here. Which it says in the manual you are only to use on the track. Sure. Promise.

The Bosch 9MP ABS system is top-shelf. It weights two kg and can be turned off if you’re feeling fancy. It also incorporates RLM (which is an acronym for Rear-Wheel Lift Mitigation) and will stop your back wheel going into orbit as you face-plant in front of the pub.

Level One of the ABS is the least intrusive and doesn’t use RLM. Level Two is a little more invasive and the RLM is present, and Level Three is probably best if it’s raining or you’re racing for money on gravel roads along the edges of cliffs. 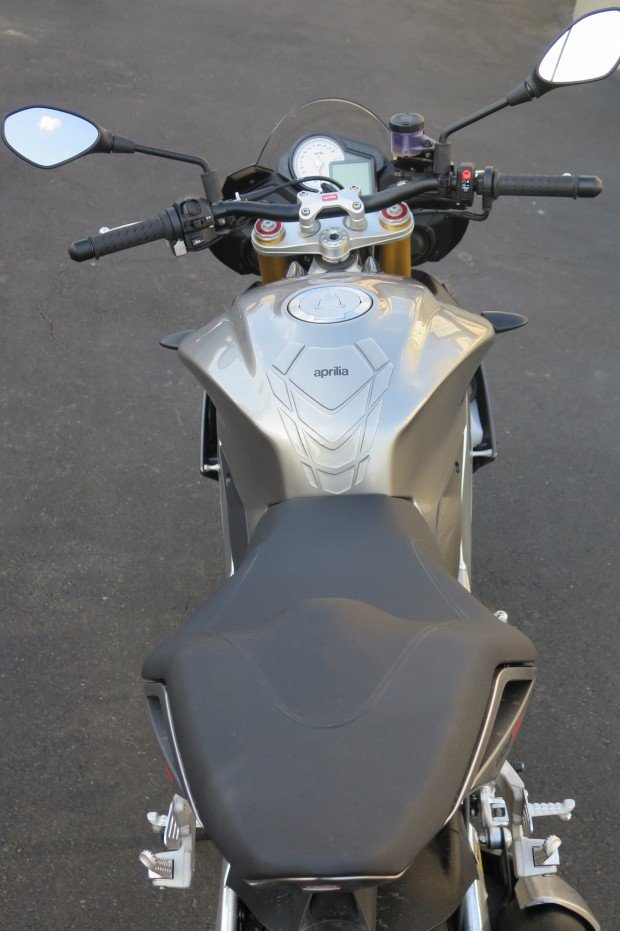 Curves and soft angles. Very Italian. And a pillion seat with a lump just about where her toyshop would need to perch. 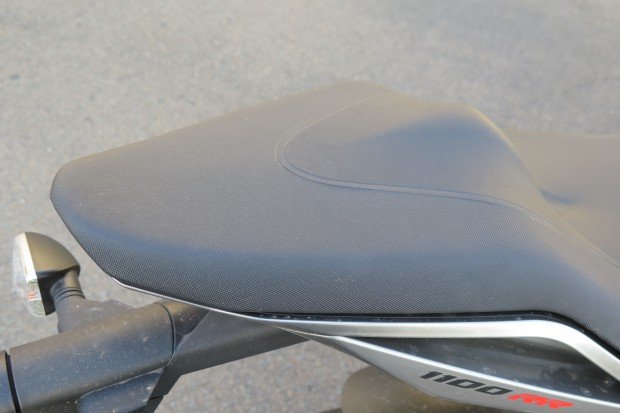 See? A nice soft lumpy section. Especially for her. You do not want to put any ‘hims’ on the back.

And of course, you can combine any of the three ABS maps with any of the three engine maps (Track, Sport and Road) for a truly holistic high-speed, balls-to-the-wall and the devil-take-the-hindmost experience.

And finally, there’s the aQS: Aprilia Quick Shift. Now this makes it sing. Really well. It’s like the conductor for a great symphony orchestra.

For reasons that are probably lost on me because they are mechanical, this quickshifter just suits the shit out of this engine. I found myself up-shifting in mid-corner for shits and giggles. You probably shouldn’t do that. Or do it, but don’t cry if it scares you. It terrified me and I did it a lot. The quickshifter works OK when you’re just pootling around, but really comes into its own when you’re…erm, setting to with a will, as it were.

And when you are willfully setting to, as I admit to doing a few times in places that are suited to such doings, the Tuono will take you as it took me.

If my life was a Mills & Boon romance, I would be the woman with the torn bodice being ravished by a stablehand among the straw and horse-dung in the stables of her wealthy father’s estate. Breathless, sparkle-eyed and giddy with delight. 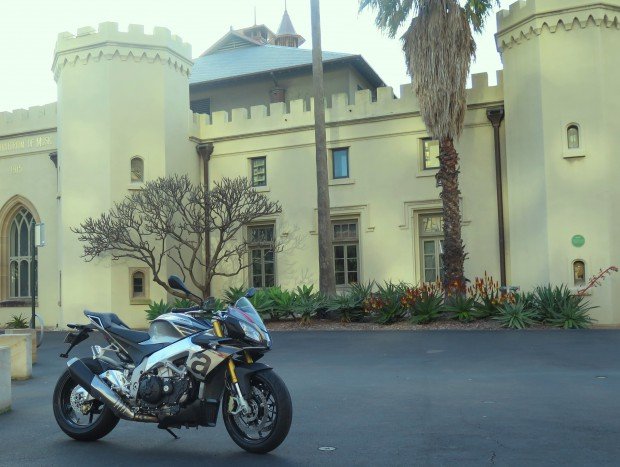 There’s probably a stable somewhere behind all that.

That was me on the Ilford-Sofala road a little after noon one weekday in early spring. The Tuono was the rakish stablehand and I was the panting, eager maiden. Except I had tattoos and a beard and I don’t actually get giddy unless I drink too much.

But you get my drift.

It’s that kind of bike. It has that ineffable something; an X factor, if you will, that raises it above its competitors – all boss-like beasts in their own right – and makes it my special little sunbeam.

There’s the noise it makes. And we’ve spoken about that. Then there’s what it does and feels like when it’s making that nose, which is being impeccably mannered and surefooted. And encouraging you to even greater acts of evil. All the time, it’s doing that.

And of course, there’s the way you feel when you’re riding it. I felt awesome. Like a storm giant. With a sword made out of lightning. And a man should feel like that whenever he can. Astride the Aprilia, you know, you just know, the only thing stopping you from a podium against anything on the roads is you. You cannot blame this bike if you lose.

The fly-by-wire throttle response is instant. Dry-gulp instant. Not abrupt or scary. Just instant. It doesn’t seem to accelerate so much as just start doing some fabulous speed. Overtaking becomes a thing of joyful, blistering arrogance.

It’s comfortable, the seat being 15mm lower than on the previous model, and the bars are a little narrower. If you’re comfortable, you’re fast. And thus you can be faster for longer. Or until the cops tell you to stop.

Then there’s the build-quality. Eye-popping. It is a quality bit of kit. Every fitting, switch, nut and fastener looks and feels the goods.

If you’re so inclined there’s also an App. The V4-Multimedia platform allows you to sync your smartphone to your bike. This will give you: 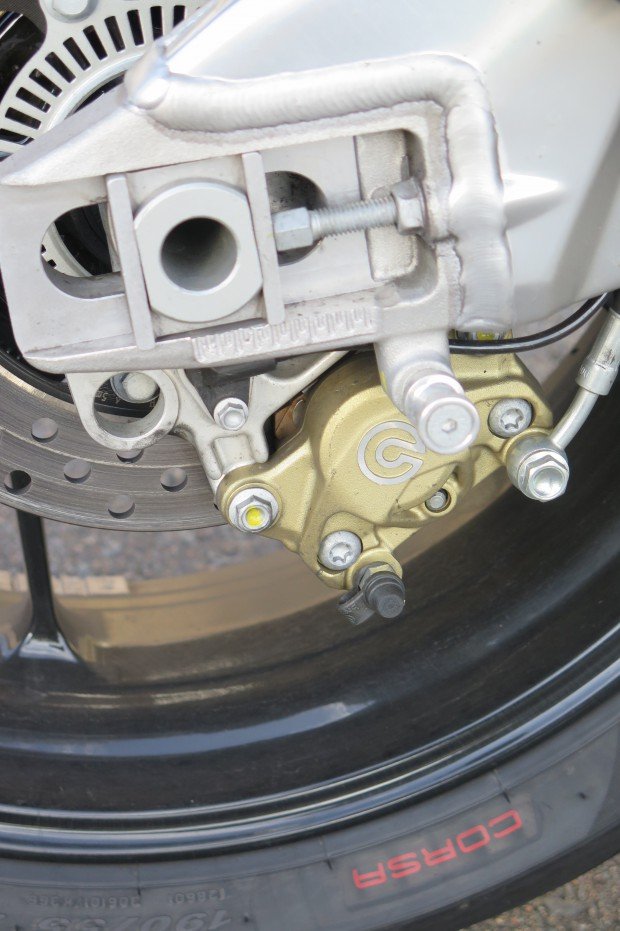 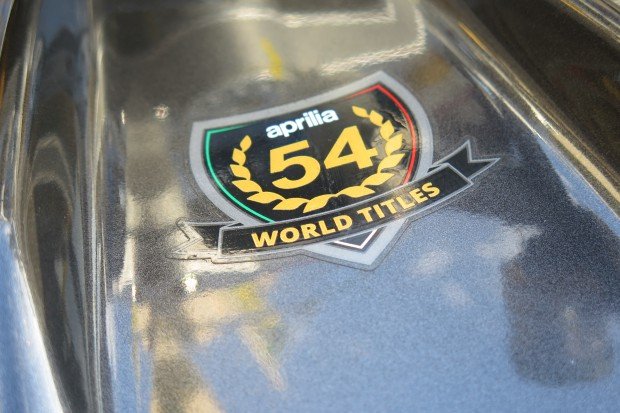 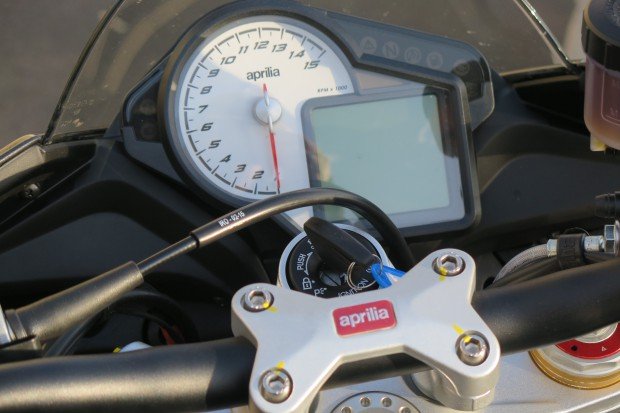 Redline? Shut up. You don’t need no redline. Important numbers appear on the right-hand screen. You should not even look at them.

By any measure, the Tuono is an astonishing package. This is a superbike in street-clothes. It sounds like one, goes like one and has the electronics and engineering integrity to back it all up.

But I am entirely to blame because they all result from me pfaffing about like an old moll.

Those wretched plus and minus buttons that adjust the aPRC stuff, and which live on the left-hand switchblock. I keep snagging them (thus altering traction control) when I’m pfaffing about and being imprecise with my hand. This usually only occurs in heavy traffic when I’m engaged in some sort of death race and I’m deploying the clutch like a crazy fool and one of my five thumbs snags the button. So it might not bother you.

Then there’s the drivetrain snatch. Which is slight, and only and ever apparent when, once again, I am pfaffing about in traffic at low speed. It disappears the instant I cease to do this and begin riding like a man; a big, angry, happy, silly man with somewhere to go and something to do and a Tuono to get it done with.

Rest assured, it will be done right. 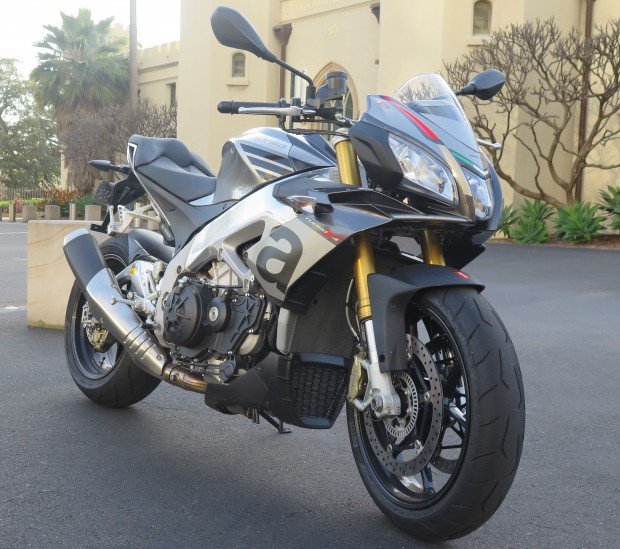 Yes, I know. Shameful chicken-strips on the front. 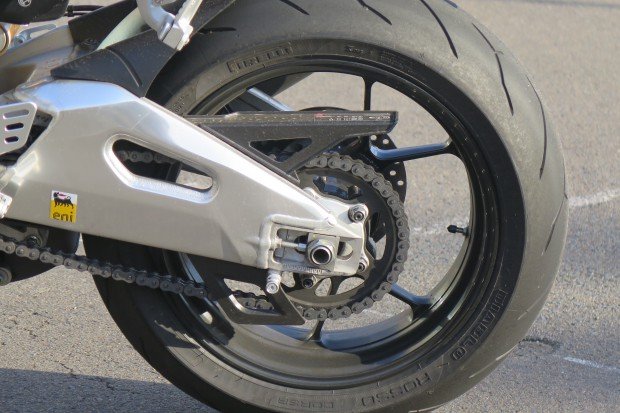 I did better on the back.

I liked it more than the KTM Super Duke and the BMW S1000R.

All three go, stop and handle at stratospheric levels of wow. It would be impossible for a normal rider to split them in terms of performance or ability, especially on the road.

So it comes down to personal preference. As it should.

All three bikes sing siren songs, whisper dark promises and allow you to blast techno-power into your arteries with a Seven Gauge hypodermic.

I listened to and mainlined all three.

I decided the Italian from the Venetian town of Noale was the one whose song I like the best, and whose promises meant the most.

And I’d put a hose-fitting in my jugular vein to facilitate the Tuono’s special venom. 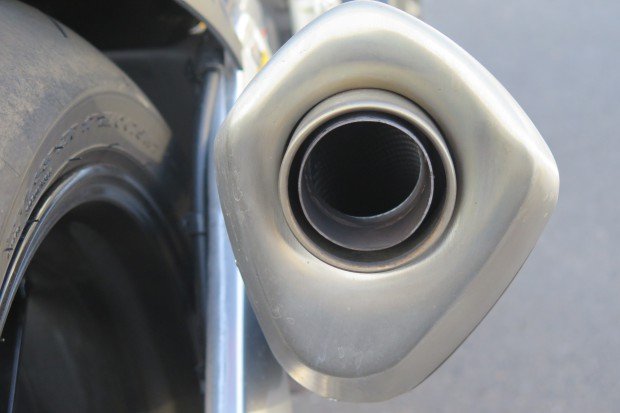 Look, it even has a speaker. 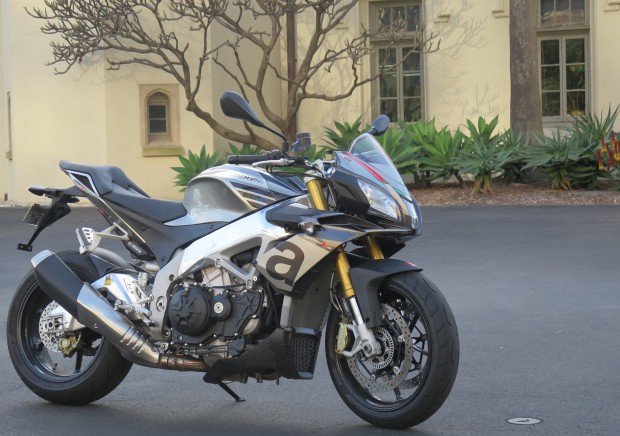 Or you can have the Factory for 26K ride-away. It comes with spectacular Öhlins shocks and a killer paintjob. Everything else is the same as the RR. Me? Well, I’d spend the extra three grand because I know how good Öhlins are and I do like my ladies painted purdy.

MORE INFO CAN BE GOT HERE.