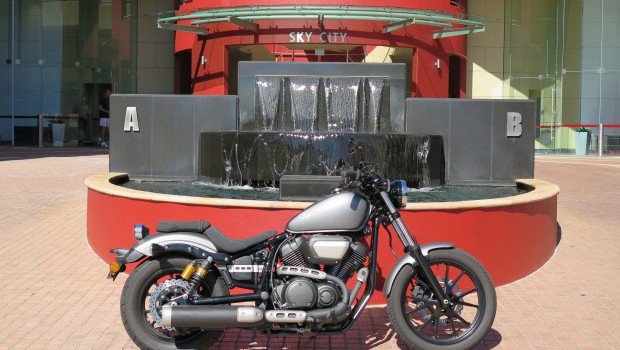 This is the first Jap bike worth getting a neck-tatt for. Then when the tears have stopped and the scabs have healed, you’ll be styling – and the Bolt is all about that. 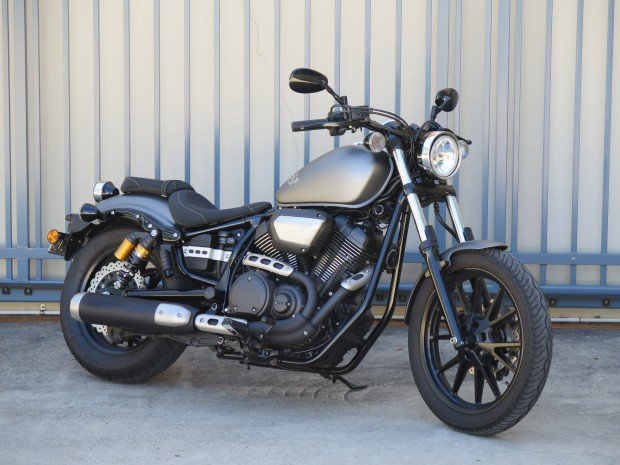 As far as blank canvasses go, this is pretty sweet.

On the road and around town, the Bolt is sweeter than a sugar-freak’s saliva. It’s no crazy power-whore, but the horses you’ve got all work with a will, pretty much where you want them to work. It’s narrow enough to split traffic without smashing car mirrors, steers quickly and the riding possie, super-low seat-height, and wide bars make low-speed manoeuvres simple and positive. 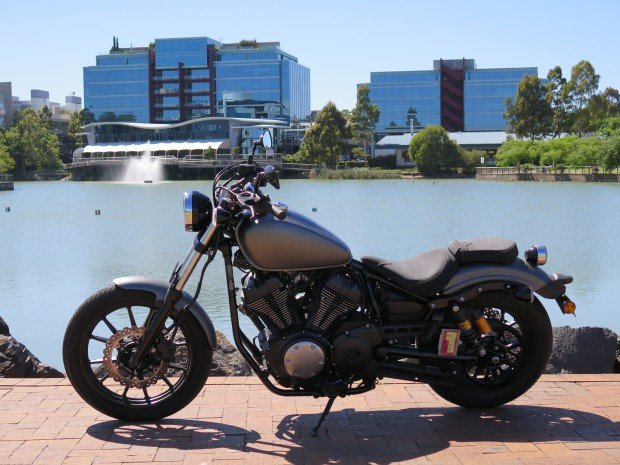 Look, there’s a water feature in the background. No, Daz, it’s not a whale.

If you’re sensible, the limited ground clearance won’t bother you much. There’s a bit less on the right-hand side than there is on the left, because the right footpeg sticks out a bit further than the left one. Yamaha had to move the right peg out about 10cm to compensate for the air-cleaner your right knee rests against, but it’s not something that will bother you unless you’re showing off or running from a Highway Patrol car.

Long-distance touring is possible, but neither you nor it will be happy when you finally get to Kalgoorlie, where the miners will probably turn you into a screaming hipster sex-toy. 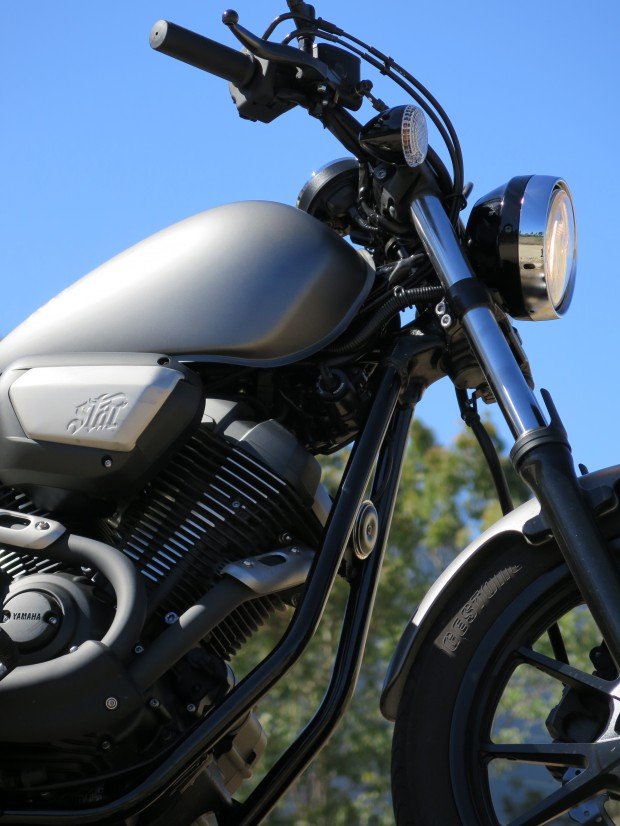 Clean and ready for customing.

Yamaha has been making torque-rich V-twin engines from about the 5th century BC, which enjoy a big rep for reliability and longevity. Their bikes are mostly bulletproof and in the last few years have been coming off the production line with a level of finish that is really quite special.

The Bolt is right up there in that regard, and it seems to whisper: “Pimp me, daddy. Make me your special girl.” Which you can do with a range of Yamaha-made bling. Stuff like lowering kits, higher bars, and brass-mesh air-cleaner covers are all available. Or just go to Bunnings, buy a gas axe, a sheet of chequer plate and some steam pipe and see what can become what in your garage with your mates feeding you tequila and advice all night. 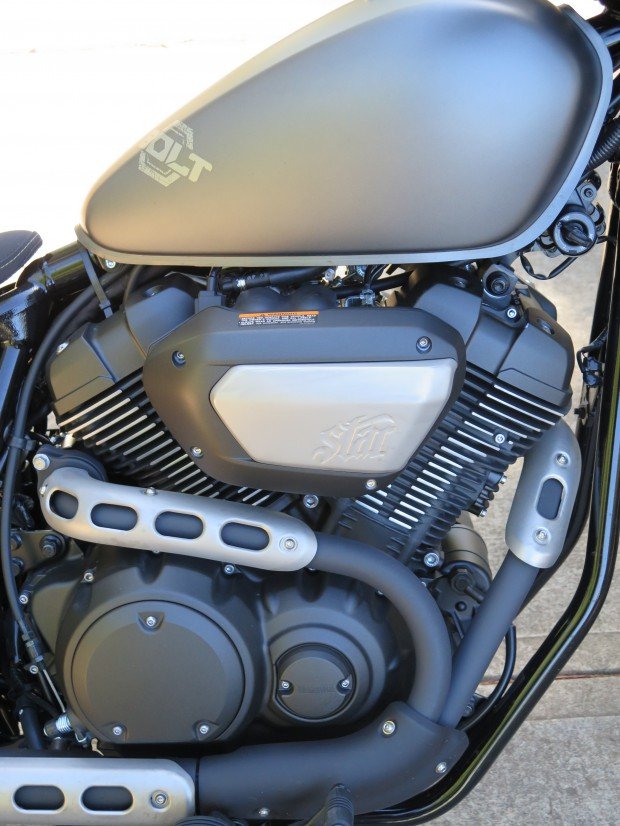 EVADING POLICE PURSUIT: Not recommended. Four out of 10. 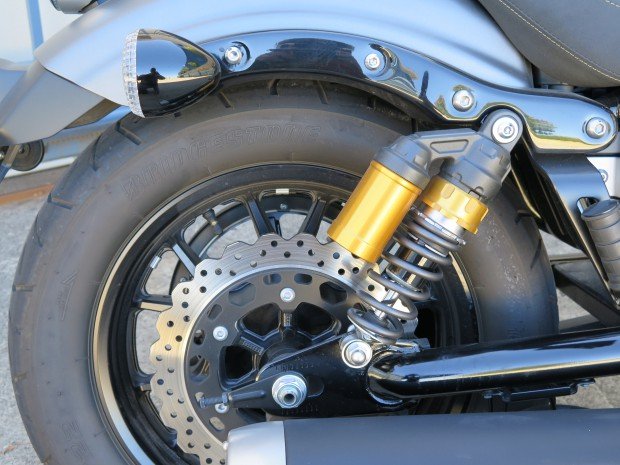 Golden piggy-back shocks. Yes, of course, you’d get them.

The Yamaha Bolt is Old School. The last time I owned a motorcycle with a nineteen inch front wheel, a sixteen inch rear wheel and a double cradle frame was over twenty years ago. And tradition doesn’t stop there. Air cooled. Single disc. Old style forks. Twin shocks. Bias tyres.

But it works, and there is a fair bit of modern tech hidden behind the Old School.

The motor is sweet. You start it, and it throbs like a fast pulse. It punches from idle. The vibration that comes through the frame and handgrips is low amplitude, and never gets worse. You know you’ve got a big twin under you, is all.

There are only five speeds. You never feel like you need more, but it’s geared tall. In first, in traffic, you ride the clutch a bit. It springs away from lights just fine, but if you’re stuck in a line of cars and can’t split, you work the clutch. 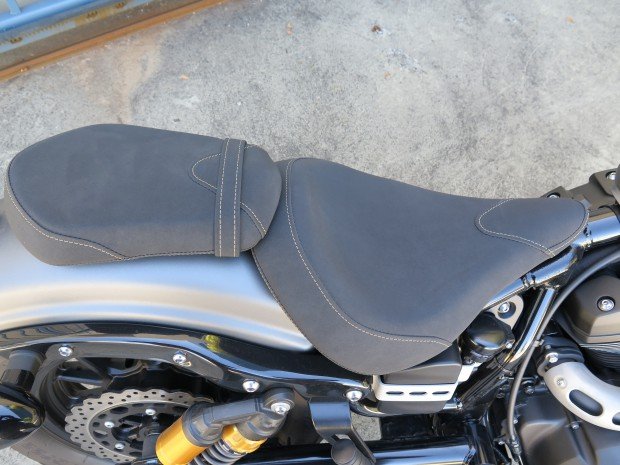 It doesn’t matter, because the lever blades are wide and curved, and they feel most satisfactory in your hand, like a 586 Smith. The clutch is feather light, two fingers will make the single disc work real well, and the motor makes its maximum torque at 3000 rpm.

Yamaha don’t give you a tacho. You don’t need one. You always have torque. The 950cc motor is punchy, but soft, despite the fuel injection and four valves per cylinder. It makes maybe 50, 55 horsepower. Not much, but it’s all where you use it riding to work. The compression ratio is only 9:1, so there isn’t much in the way of engine braking, and it’s not fussy on petrol: 91 octane is fine, it runs okay on 10% ethanol as well.

They give you a digital speedo. When you press the button on the right switchblock, the bit below the speed toggles clock, odo, trip 1 and trip 2. When the fuel light comes on, another trip meter appears and gets focus, and starts incrementing the number of kilometres ridden since the fuel light went on. Clever. 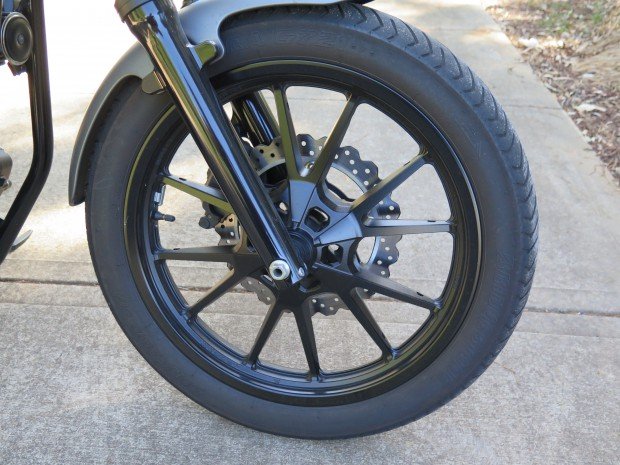 Bike-appropriate stoppers and a clean-looking mag.

The twelve litre tank took nine litres the first time this happened. I did the numbers, and it was sipping 25 km/litre. Range, then, is somewhere between 240 and 300km. That’s enough.

Seat height is really low, so the weight seems less than the 245kg wet in the specs. The gearbox is a bit agricultural in the low gears: there’s a big clunk when you select first from neutral and a smaller one going from first to second, but the lever throw is light and positive, and I never missed a gear.

My second ride on it was over the Blue Mountains. I scraped the left footpeg occasionally. I scraped the right footpeg a lot. The footpeg folds, and then its bracket hits. The bracket doesn’t fold. It gets a bit disconcerting, especially when you’re widening your line and find yourself running out of road. 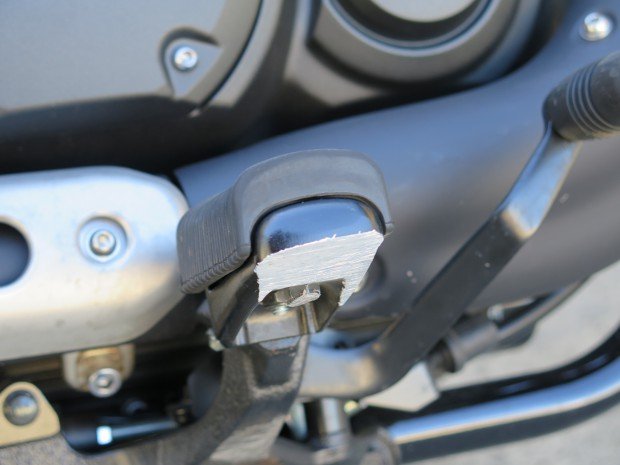 Yeah, this wore down some. As it will.

Your left thigh snuggles against the tank, but your right thigh misses by maybe 100mm, because your knee is against the air cleaner cover. I reckon Yamaha have moved the right footpeg out to compensate, thus it drags on the road all the time.

Pity, because it handles pretty well. It’s got 41mm forks at the front, and the top of the front cylinder is bolted to the frame to help stiffen everything up. The back moves around a bit on a rough road – it only has 70mm of travel, so it’s over-sprung, but the forks are okay, the swingarm is big and rigid, and the chassis belies its old school looks. 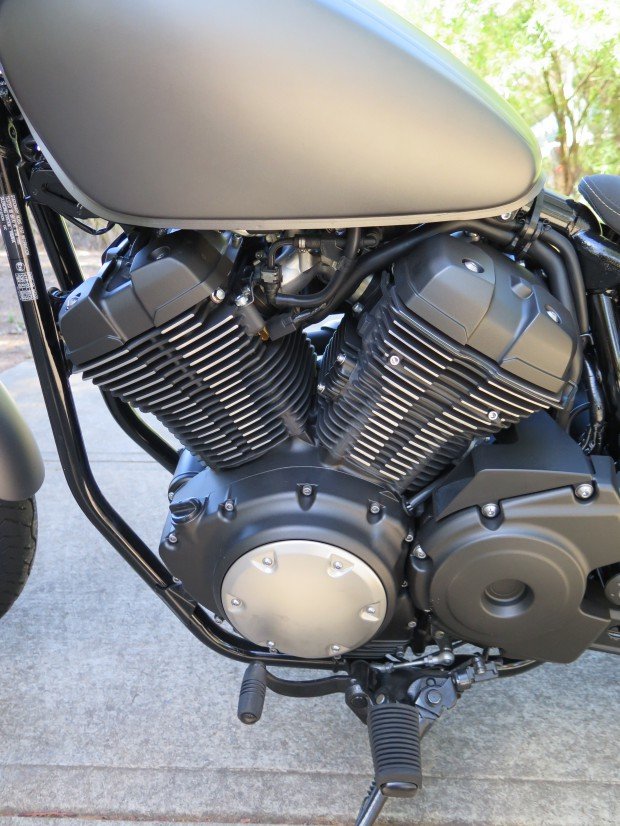 Not an un-handsome motor at all.

If you hit a bad bump, you feel in in the kidneys, thanks to the stiff shocks and the upright riding position. The riding position made me into a windsock over 90 or so km/hr, and put a bend in my lower back that isn’t as comfortable as leaning forward and taking a bit more weight on the arms. Seat comfort is good, though. 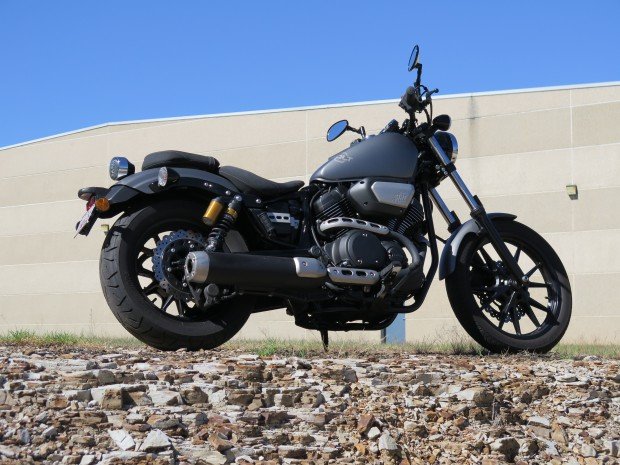 Pillion comfort is not your problem. You’re riding, remember?

Belt drive is nice. It’s quiet and low maintenance, and makes the drivetrain really smooth. There is a bit of gear whine at low speeds, but that’s okay. The exhaust is quiet, and riding it at 80-100km/h is like riding one of the old BMW airheads: a comforting tappet tick over a muted exhaust. The vibration is noticeable at that speed, but low. It’s never uncomfortable, but the mirrors blur. The engine has no balance shaft. Yamaha apparently concentrated on removing reciprocating mass by making the lightest possible con-rods and pistons. It works, and saves weight.

It looks kinda cool. The Japanese have made plenty of V-twin cruisers, but not many that look cool. This is no XV920. It’s a direct tilt at Harley-Davidson’s Iron 883 Sportster; stylistically, and engineering-wise. The only thing that hints at Yamaha is a small tuning fork decal on the top triple clamp. 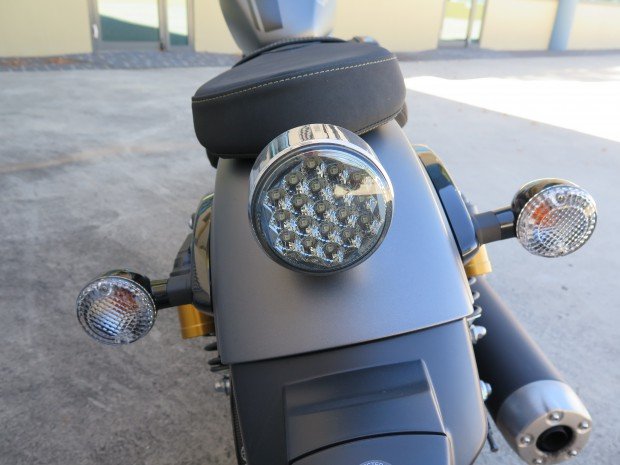 LED – we understand it is the illumination of the future.

It’s a lot of bike for thirteen. It’s about a grand cheaper than a Harley-Davidson Iron 883, weighs less, has wave brakes, more valves per cylinder, makes more torque at lower revs, and comes with a five year warranty.

In the market for a gritty-looking sub-litre boulevard cruiser? Add the Bolt to your list.

VARIATIONS ON A THEME

Yamaha clearly intends for the Bolt to be a base from which beautiful things can be made. Here’s a few we found kicking around the place. 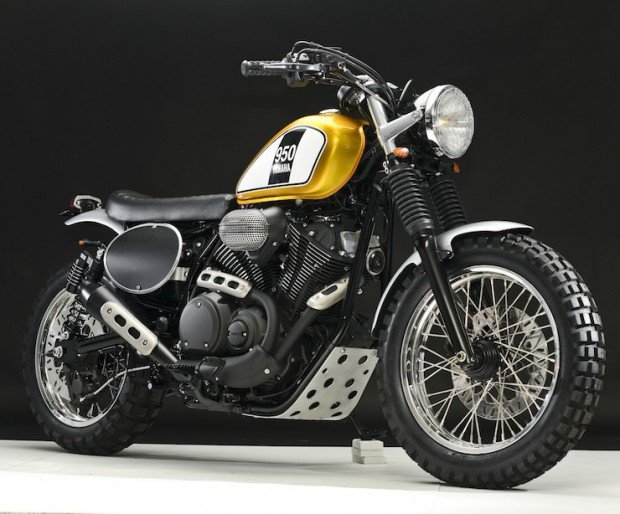 Sweet, flat-tracker from the US 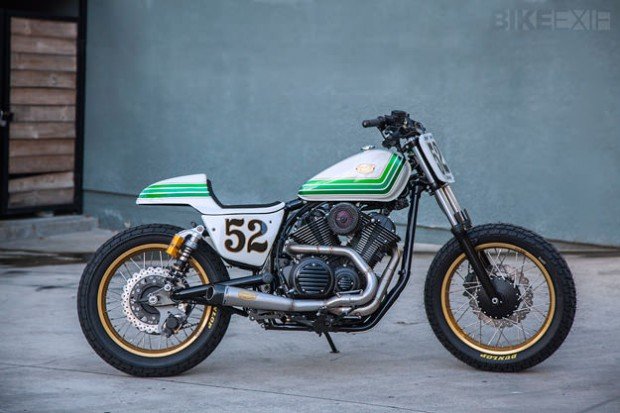 Roland Sands’ take on the Bolt. 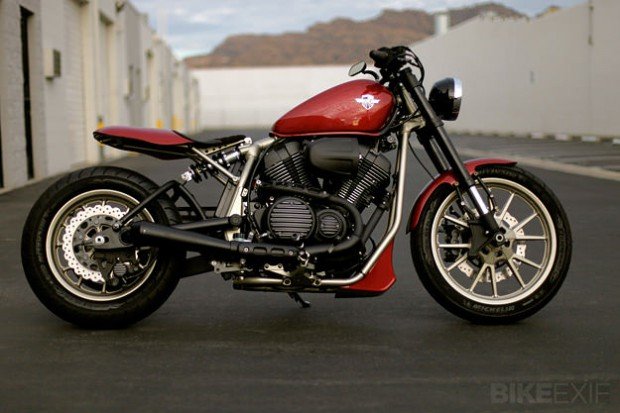