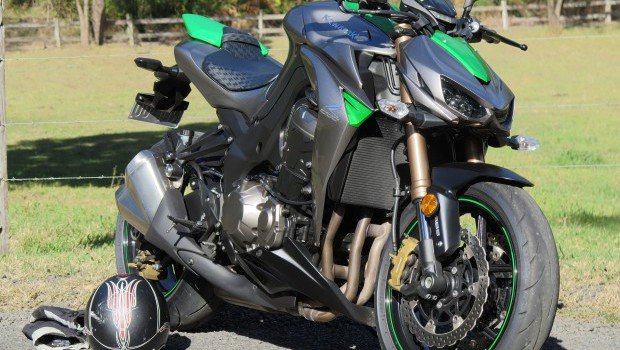 I am experiencing great relief. 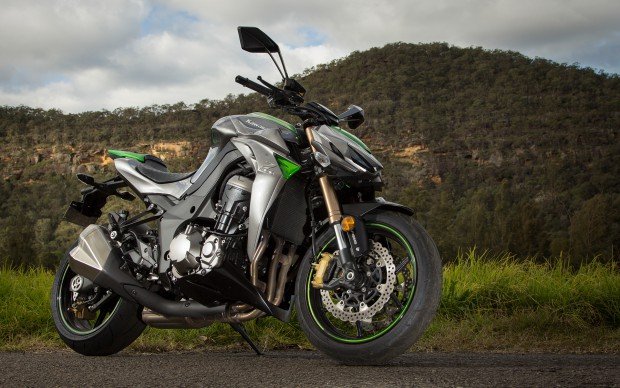 Would it be even more awesome in matte black? Oh yes. 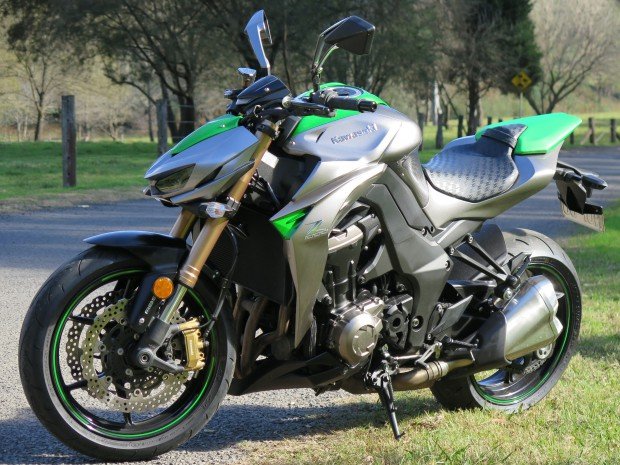 Or perhaps painted up like one of the original 1972 bikes? 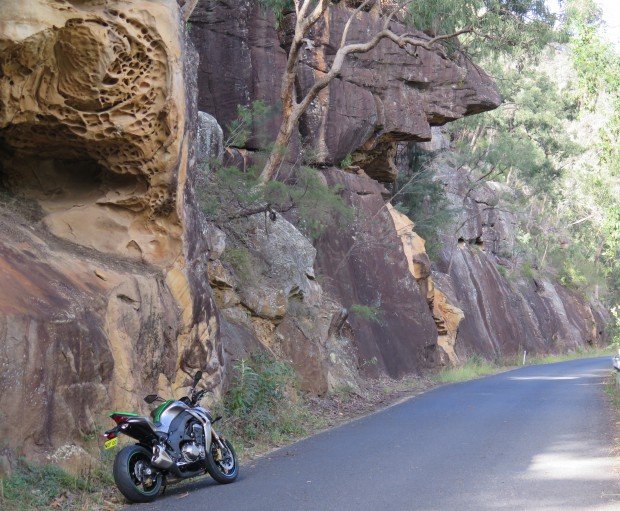 When Kawasaki first revived its famous Zed back in 2003, the world got all excited…and then kinda shrugged its shoulders and went “Meh.”

And who can blame it?

The 2003 Z1000 was not, even if you were drunk and trying to be nice about it, a worthy successor to the stunning, all-conquering, Toecutter-carrying, Bubba Zanetti-transporting missile of the first Mad Max film.

In 1972, the Z1 was the fastest production motorcycle on earth. It was the bomb. I fell in love with it then and to this day, I still reckon it’s one of the most aesthetically beautiful motorcycles ever made. 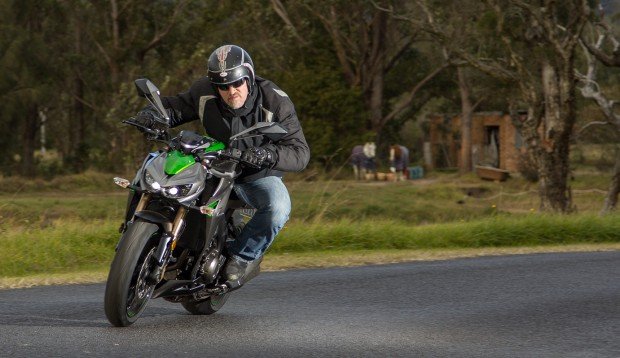 Inside, I am happier than a clown at a monkey show. 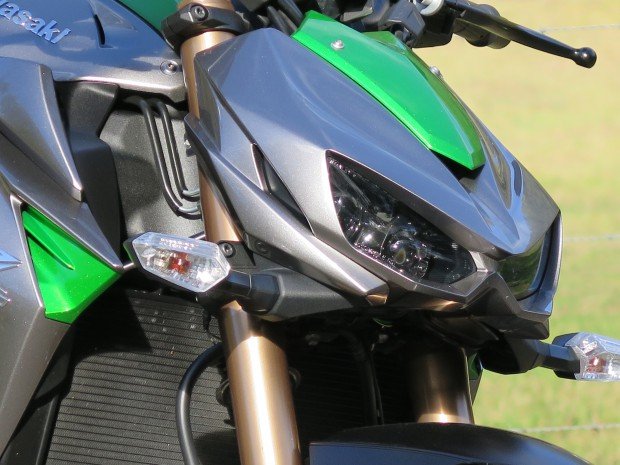 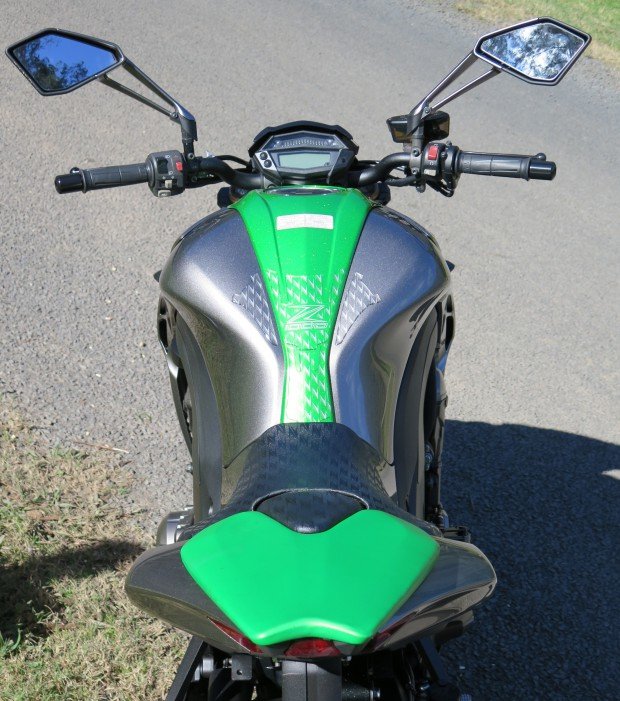 This year’s model is slimmer with heaps sexier mirrors. 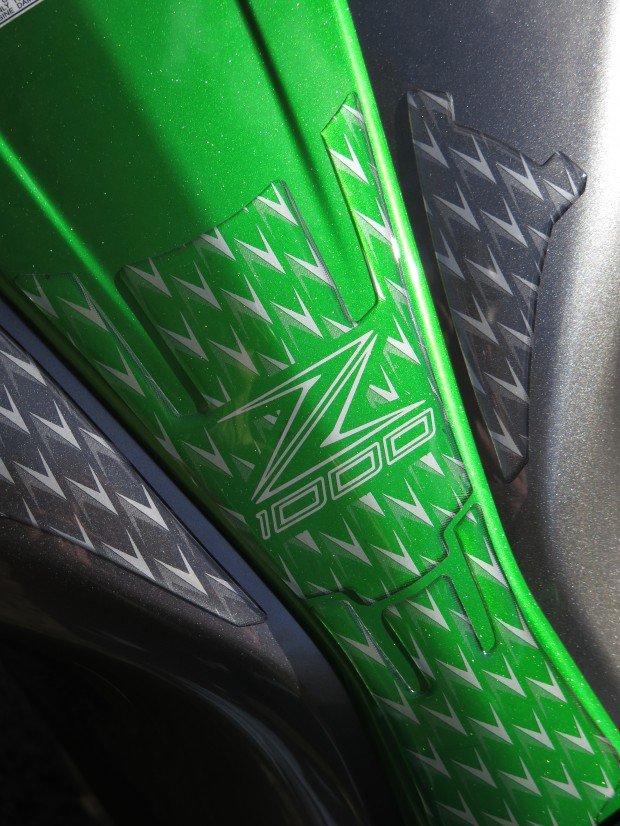 The 2003 reincarnation could make none of those claims. Some design genius even decided there would be an orange version of the yukky awkward-looking thing.

But eleven years later, there is finally redemption a true resurrection of a certified motorcycle masterwork.

Sure, the new Zed is no longer the fastest or the most powerful production bike on earth. There’s another Kawasaki that can lay claim to that title.

So why do I reckon it’s finally a worthy successor to the original Zed?

Just look at it. There is no other naked Jap litre that looks anything like it. Just as the first set new parameters in terms of design, the new Zed is right there setting them again. Sure it’s far more brutal than it is beautiful, but we do live in nastier times. It’s like a viper crossed with a pit-bull – all hunched muscle and whipcrack speed. 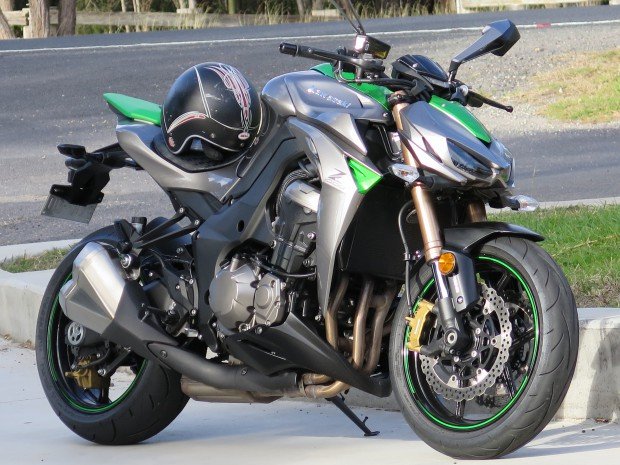 Yours won’t come with a road-worn Bell helmet. 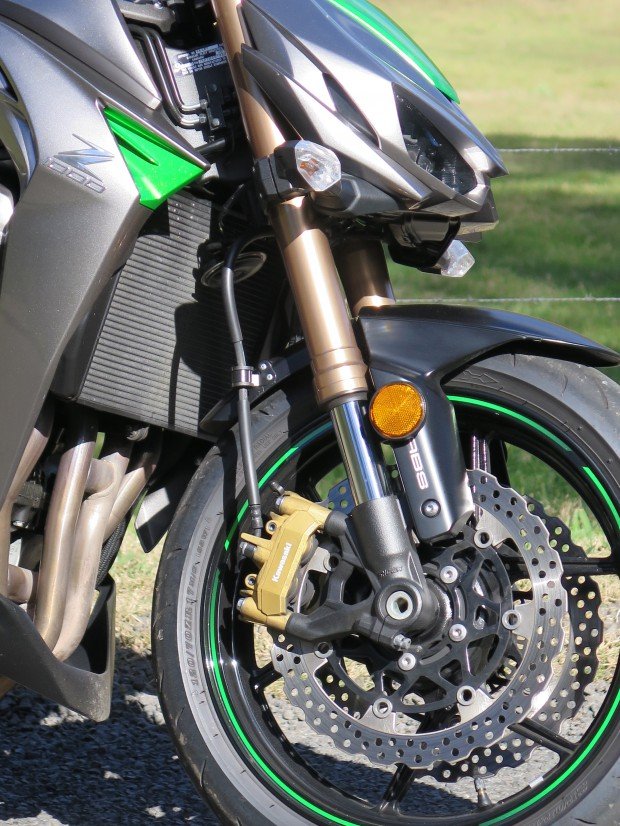 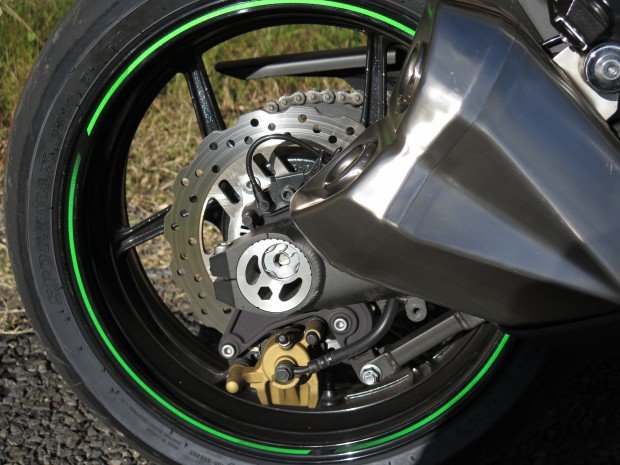 Good feel at the rear and I’d replace the stock pipes with four-into-fours to keep the look.Or just smash the guts out of them with a steel spike. 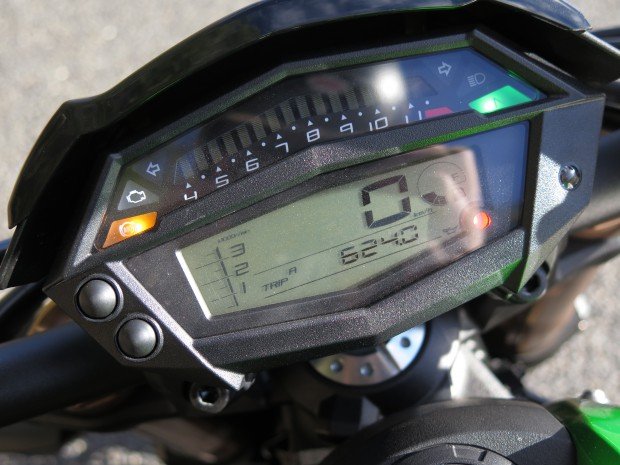 You got to love a tacho that doesn’t care about anything under four. 100km/h in top is four-and-a-bit thousand rpm.

Kawasaki has said that the new Zed embodies sugomi – the unique Japanese concept of something that inspires awesomeness and dread when you behold it.

I am certainly not in either awe or dread of it, but I reckon it’s gotta be the best naked in-line four you can buy in terms of looks and rideability.

There’s 104Kw and 111NM at 7300rpm shooting 221kg up the road – and that’s pretty good. It’s liquid-cooled cos all the cool kids are these days, and boasts 38mm Keihin throttle bodies, with the two short, two long intake trumpets on the 2013 model now replaced by four equal length, long intake suckers that improve low and mid-range power delivery.

The gearbox is slick – you kinda just flex your ankle and it changes gear . It’s a precise and positive change and this year’s box sees gears one through five one tooth lower, while sixth is the same. 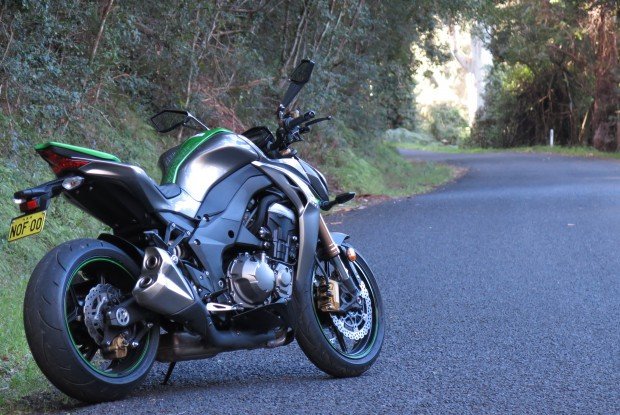 It can’t say I never took it anywhere not nice. 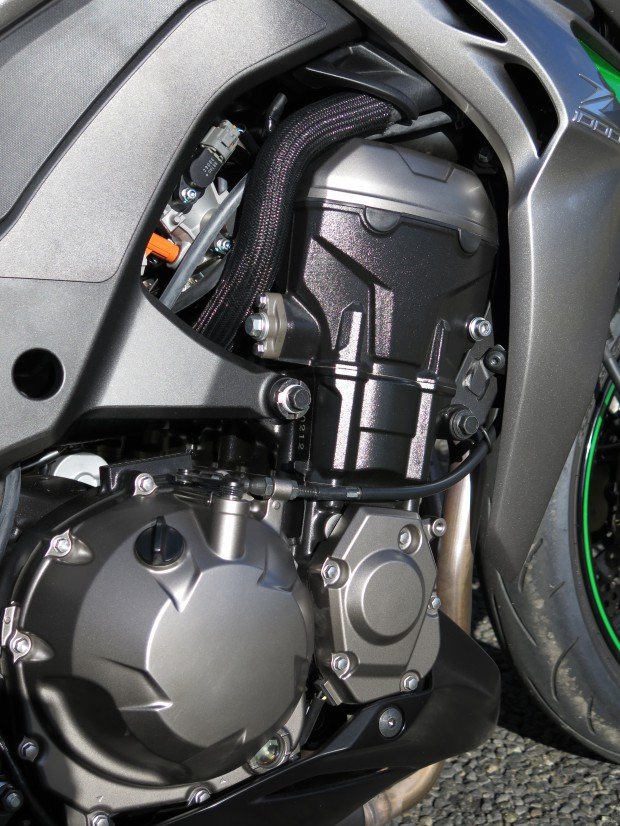 Pretty good-looking donk for a finless thing, huh? I wouldn’t mind replacing that cloth-covered pipe with some kind of insane purple braided unit. Like a throbbing vein. 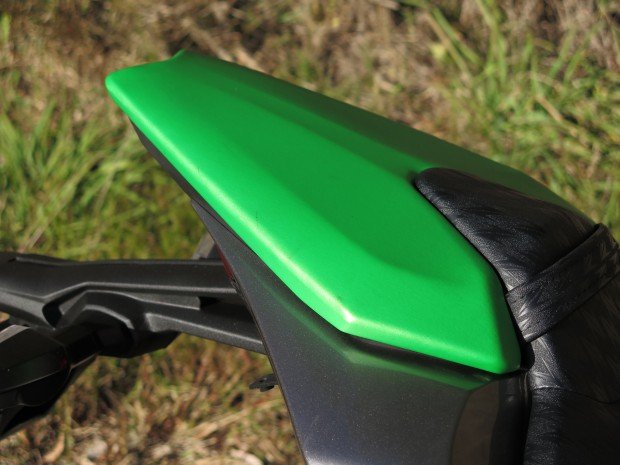 Tokico radial-mounted monoblock brakes up front run different diameter pistons – 32mm on top and 30mm on the bottom, squeezing sexy 310mm petal rotors. They squeeze them good too. No savage brutal grabbiness, but lotsa stopping power and the new ABS has a fluid pressure sensor to suppress rear-end lifting in those pesky near-death situations.

I like the pipes too. Not so much the sound they make, but they certainly look unique. That said, the Zed sounds pretty meaty via the howling intake roar when you get up it.

And I discovered (but I don’t know if Kawasaki did this on purpose) that there are ready-made heel rests where the rear foot-pegs are mounted if you wanna use them.

Out on the road the Zed shines like a diamond. It’s easy to ride and it’s easy to ride fast. The hallmark of a sound, well-made, engineered and thought-out motorcycle. Yes, finally. And I also have to acknowledge that the level of finish is very high. The Zed looks and feels like a quality product. Kawasaki has certainly tried very hard in that department. 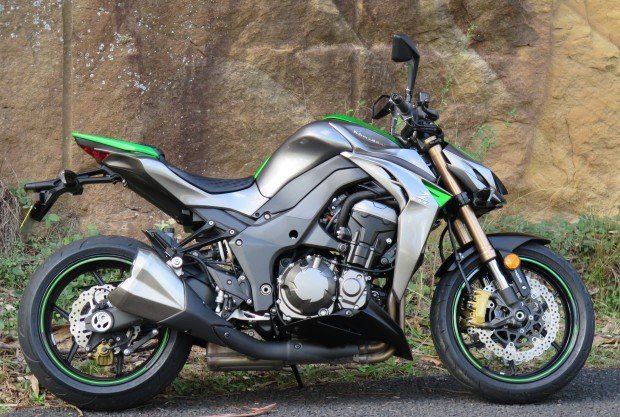 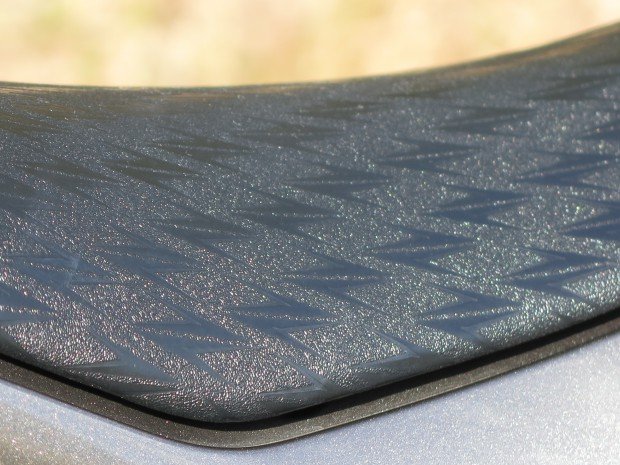 Seat is full of Zs. 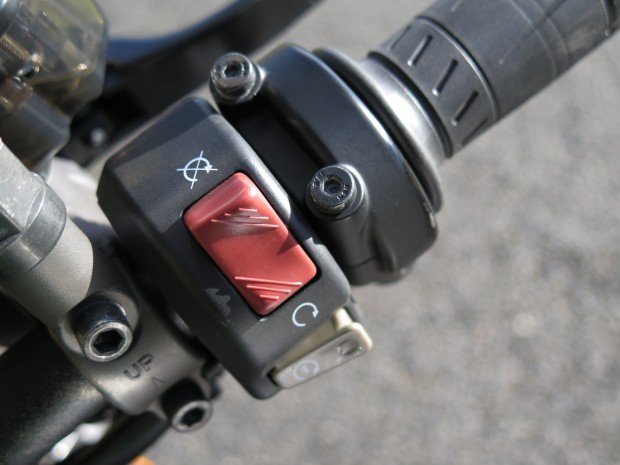 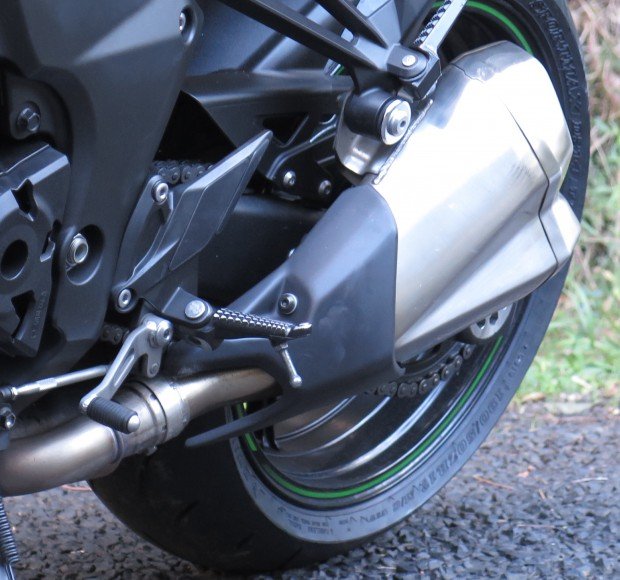 Your heel will sit comfortably on that round bit.

It steers quickly, though not sportsbike quick (which is perfectly fine by me, just quietly) and is a sheer delight to hammer through bends. It commutes beautifully, tours comfortably and the engine is smooth and loaded with useable torque.

The suspension is adjustable front and rear and screwing around with it a bit would make the ride a little less firm than it was set at. I didn’t screw around with it, primarily because I’m not a suspension sorcerer, but also because the faster you ride it, the firmer you’d want that suspension to be. But if I was doing a lot of commuting, I might speak to the pre-load with some sterness.

It’s happy to hum along in sixth at 2500rpm – though the tacho doesn’t even register revs under four, but when you wanna get funky, just twitch your left ankle in a downward motion and turn the black thing on the right handlebar.

The Zed pulls hard and clean all the way to the 11500rpm redline. And I do mean hard. Not ZX10R hard and certainly not ZX14R hard – but certainly hard enough to make you pant a bit. The acceleration is not insanity-inducing. But it’s not all that far off, either.

Hands up if you’re a fan of that insane all-body buzz that thrums through you when you kick a Jap thou in the guts and it starts to howl its head off, while zinging its acceleration through your whole body. Yeah, I am.

The reflectorless LED headlights are superb – offering a very wide flat beam of white light. If other manufacturers would adopt these as standard our evening jaunts would be much brighter. 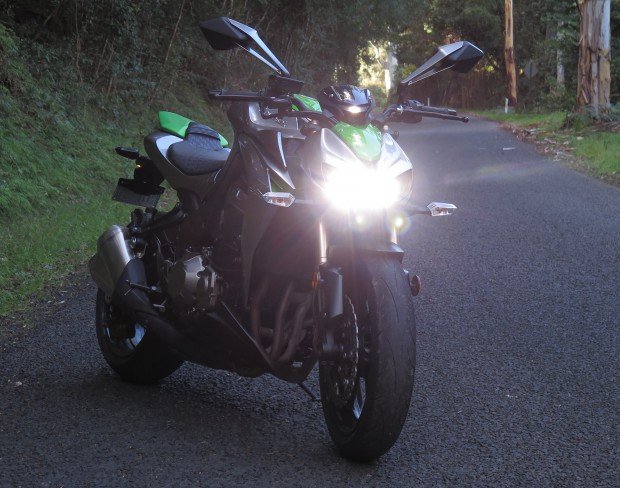 I liked the twinned Zed logos on the seat and the tank. At first glance it looked a bit like the skin of a reptile, which I thought was kinda neat. And I think that replacing the rear cowl with a green pillion pad is a stroke of stylistic genius. Yes, your pillion does need to be committed and small about the buttocks, but that’s precisely the kind of pillions we all need if we have to have them.

The whole package is quite impressive.

It goes, it looks crazy mean, it handles, it sounds hot and can be made to sound much hotter, it stops and it presents as a well-made, beautifully finished bike. And did you know the Zed’s kill switch is the same dull retro-red red colour of the original kill-switch? Very cool, huh? 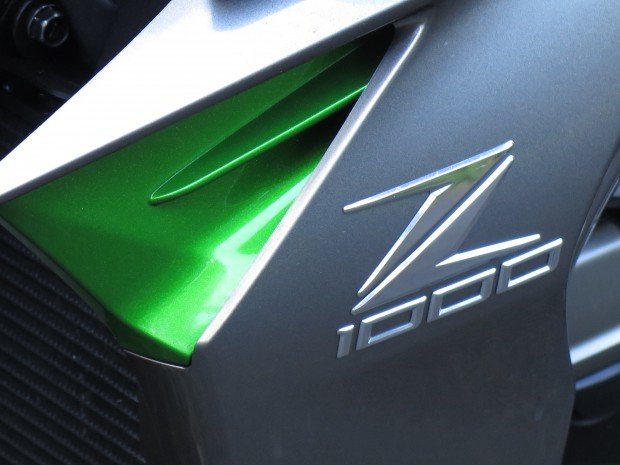 I guess that’s precisely it. Kawasaki has nailed that bit.

It’s once again, and after 42 years, built the world’s coolest in-line Japanese thousand.

The really good images are by Boon. The not-so-good ones are by Borrie.