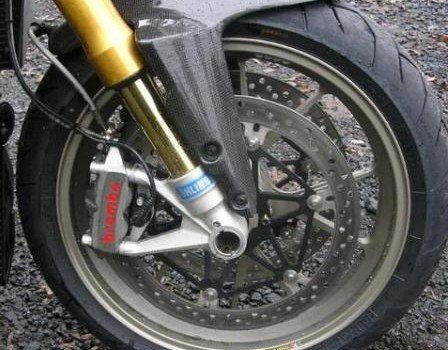 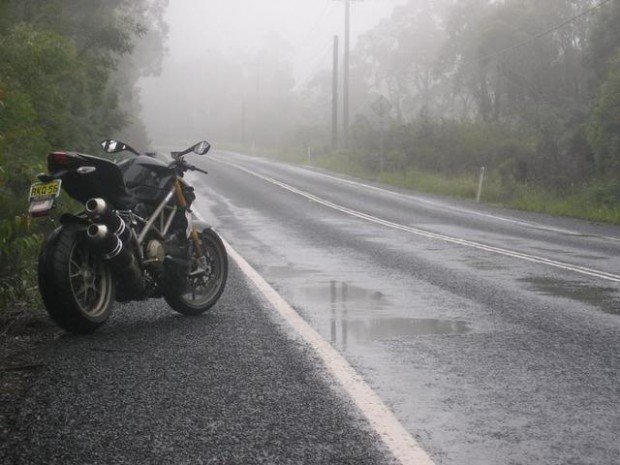 NOTHING, but nothing focuses the mind more vividly than arcing into a 65km/h bend at 120km/h on a borrowed $30,000 bike in the pouring rain. 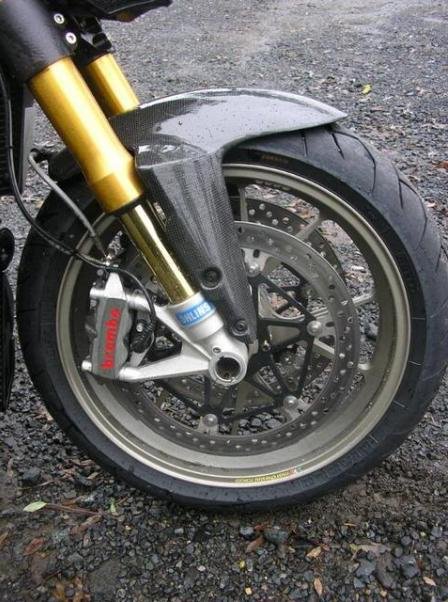 Brembo, Ohlins and Marchesini: among the best

It is the stuff that dreams are made of. Or nightmares if the Road Gods decide it’s your time.

Still, hand on my heart, the Streetfighter S is quite probably the best wet weather motorcycle I have ever ridden – which would make it a dry weather masterpiece, but since it’s been raining pretty much non-stop since I picked it up, I gotta call it like I ride it.

Why is it so good in the rain? For the same reason the MV Agusta F4 is so good. Lightweight Marchesini rims, Pirelli Corse III tyres, incredible Brembos, Ohlins suspension at both ends, a very light rolling weight with an overall dry weight of about 170kgs – and well, you can work it out.

I did a loop of about 300km this wet Sunday morning on a completely cop- and traffic-free run out to Wiseman’s Ferry via Cattai Ridge Road (and some other little detours I know out that way) and had a truly revelatory ride. 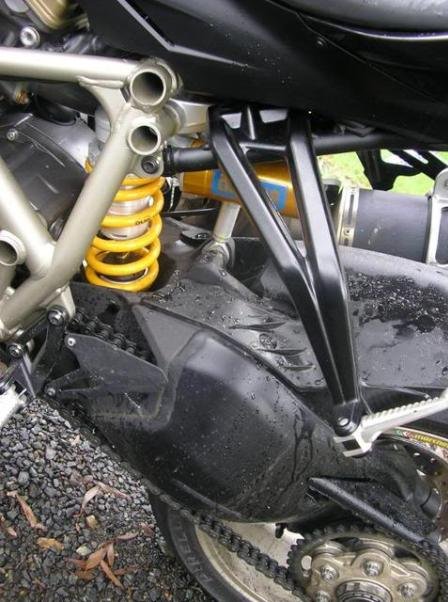 It’s been a while since I purposefully headed out into the rain to see what was what on a bike. Hell, Pom journos do it all the time, but our resident motorcycling mandarins will only ride in the rain if they are caught out in it. But I had a ball. I wore my old stuff – old Spidi jacket, old Joe Rocket pants, gloves and boots, old Smith goggles – and I had a freaking, eeping, watery ball. I got a little damp, but with Sydney’s current climate approximating that of tropical Singapore, I’ve been moister than a stripper’s gusset for the last week anyway.

The bike is a marvel. It is now my favourite Ducati. If the madness ever takes me and I feel compelled to buy one, this will be the one I’d buy.

Why? Because it is so wretchedly unique.

It’s not comfortable enough to commute on – the seat is canted forward forcing your testicles to adjust to being forced into the tank, and there’s an inordinate amount of weight placed on your wrists. And it’s not designed to tour on, apparently because it doesn’t have a fairing – though it is certainly frugal enough on the juice (I was getting about 260 out of a tank).

So what is it designed to do?

It’s designed to grab your hooligan glands and savagely squeeze them until you piss and shit adrenaline, fear and enlightenment all at once.

It’s that good a bike.

The only thing that is missing from its top-shelf arsenal of goodies is a slipper clutch and you may get a bit of chatter from the rear-tyre if you’ve come red-hot into a corner – otherwise, it is a gloriously confidence-inspiring ride. 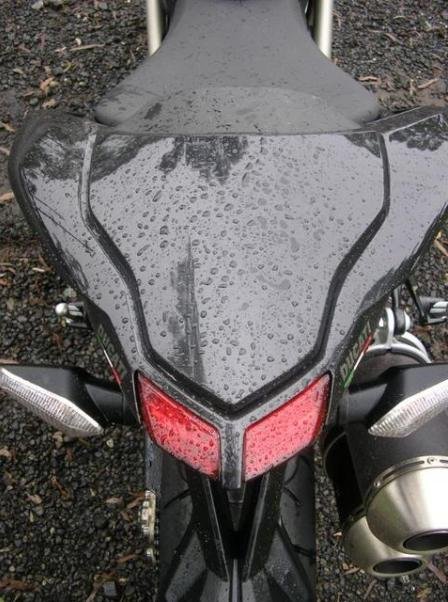 And a Duc tail, of course

Around town the clutch is a bit grabby and it’s not very happy at low speed Freak Hour shit, but then you wouldn’t expect it to be. The Streetfighter lives for bends. Fast ones, slow ones, in-between ones. It revels in them like a drunk drowning in a vat of scotch. Its joy is contagious. If you’ve never ridden a Ducati before, a quick blast through some of your favourite twisties on one of these and you’ll understand why so many people sign their souls over to own one.

Off idle, the engine is super-strong (155bhp and 85 foot-pounds of torque) and ever so willing to punch on, rocketing you out of corners with foamy eagerness, and the Marelli fuel injection is generally quite sweet once you’re away from traffic.

It’s very narrow, and your knees are remarkably close together, though the width of the handlebars make it wider than it should be when you’re lane-splitting.

The S model differentiates itself from the stock Streetfighter with the Marchesini rims, the Ohlins suspension and the utterly remarkable eight-stage Ducati Traction Control (DTC) system. Engineered using the technology from Ducati Corse’s garage, the DTC system marshals independent wheel speed sensors to work out if the rear wheel is spinning (because it cannot hear you screaming), which tells it there is a loss in traction. When it understands that there is, the ECU reduces engine power until traction comes back. Eight separate rider-adjustable settings (via the left-hand switch block), One being the least electronic interference, eight being the highest, instruct the ECU on how much tyre spin is cool. Mine was set on four, which allowed me to kick its guts very hard out of soaking wet bends and be rewarded with traction rather than death by highside.

Could I live with this much electronic brilliance?