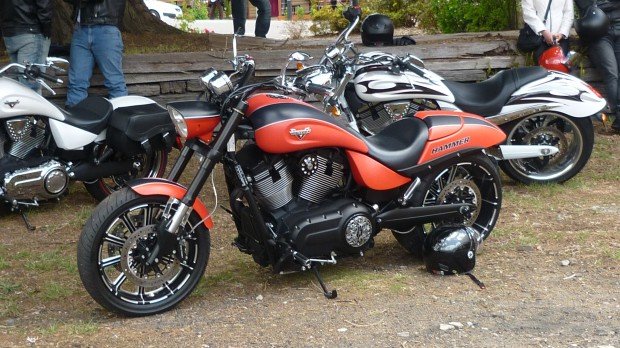 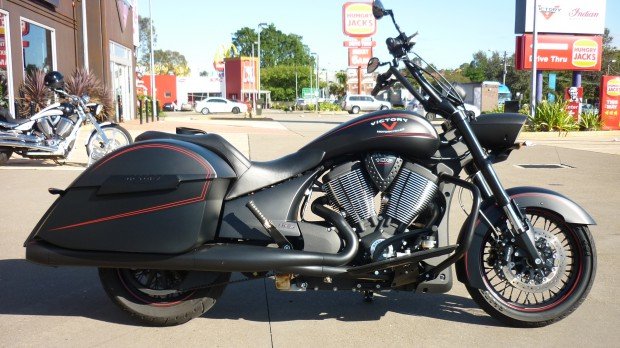 How bad-arse is this evil black swine? I loved it.

It’s been 15 years since Victory first appeared on the motorcycle scene.

You’ll recall they were the design-brainchild of legendary bike customisers Arlen and Corey Ness, and as such, the bikes were bound to be a unique take on the American V-twin paradigm.

And they still are.

There is simply no mistaking a Victory for a Harley-Davidson – and Victory and its owners wouldn’t have it any other way.

I was fortunate enough to receive an invitation to attend the Sydney dealership’s 15th anniversary celebration ride, which was to wend its way from the showroom in Fivedock on Parramatta Road to the Victoria and Albert Guesthouse in Mt Victoria. Yeah, like I really needed an excuse to for a blast up the Bells Line of Road on a Sunday. 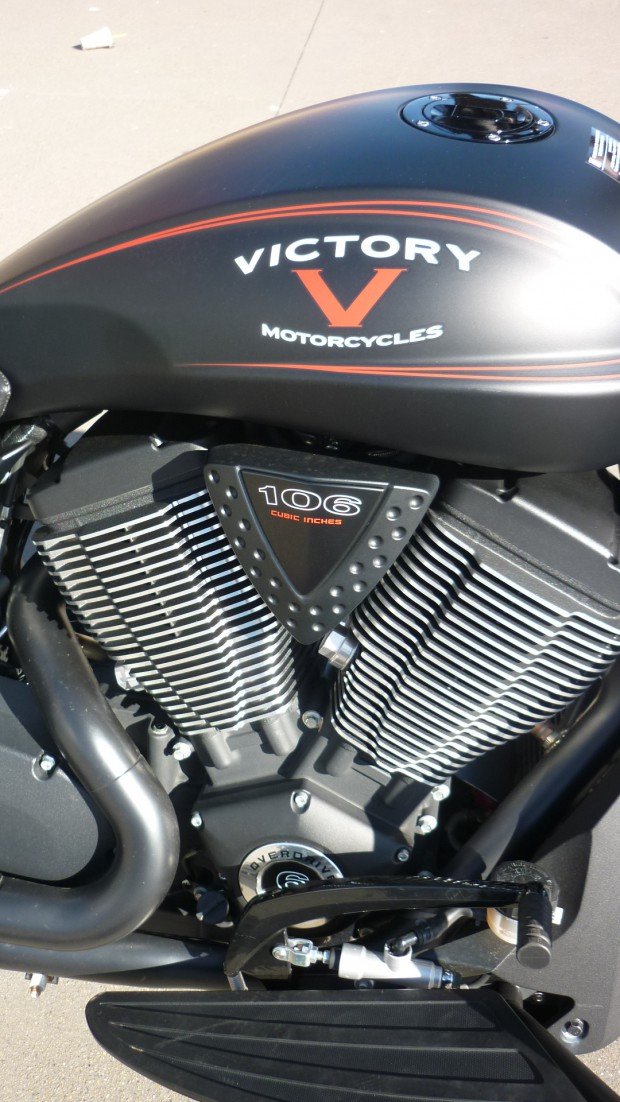 It is a handsome motor. Always has been.

I was a little nonplussed at first. I was wondering if the Victory owners were anything like the HOG mob. I was pleasantly surprised to discover that was not the case at all. They are far less insular, very welcoming and there is a complete absence of merit badges and faux colours. Sure, they wear Victory gear, but that’s perfectly understandable. They love what they ride and they are not afraid to show it. 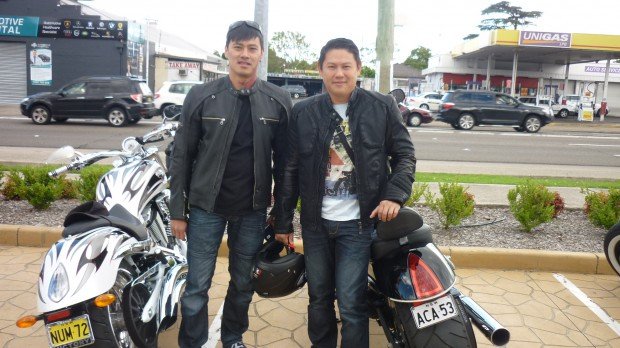 This was MIke and Dom’s first ‘big’ ride. Mike was so excited, he told me he didn’t sleep the night before. He also assured me they were not Triad members. But in all seriousness, it was great to see such enthusiasm in new riders. 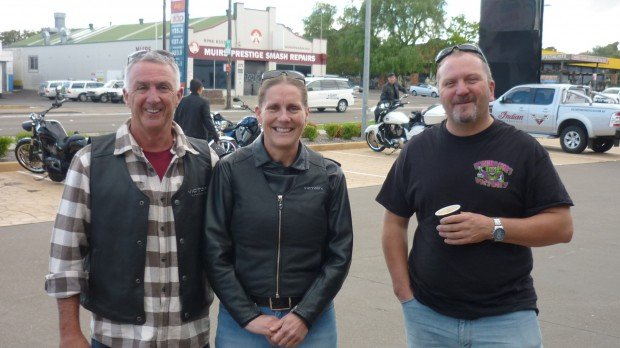 About 50 people turned up and at 0930 the pack hit the road outta town. I’m always very wary of riding in groups with people I do not know, so I picked a space of road a bit away from the main group and watched and waited. Quite unintentionally, I found myself three bikes from the front of the group as we approached Bellbird Hill and the start of the Bells Line of Road proper. I had hitherto been nodding off in-between wondering how other people manage to ride at the speed limit. Because that is what I had been doing. It does not do to make a twat of oneself when one is a guest. So I swallowed my inner madness and tried to behave myself. 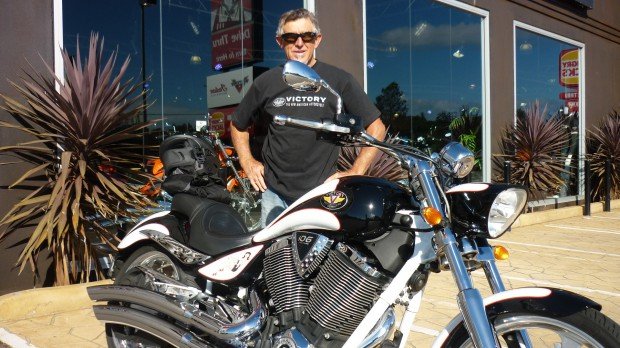 This is Peter. He’s had his Victory for two years, banged out more than 21,000km on it and painted a hot babe on the sidecover. 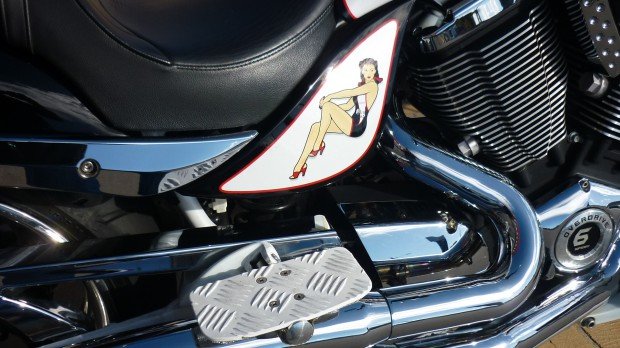 Peter’s pin-up. Um, I do not think the rear footpegs are genuine Victory parts. 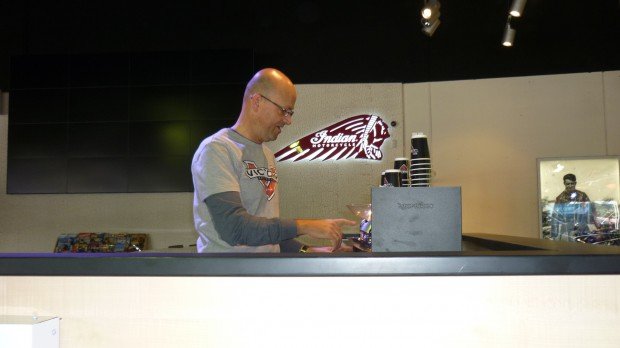 This is Ezio. He made me a coffee and gave me a matte black motorcycle. He is one of the world’s great men. 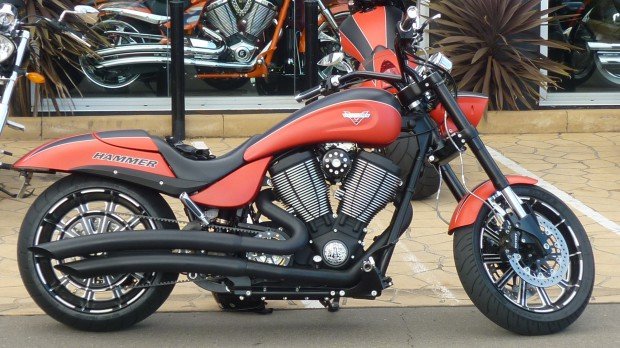 Chris’s matte orange beast with the best wheels I saw there today.

Interestingly, we had been told at the start of the ride that if we wanted to head off on our own, that was perfectly fine, provided we understood the risks involved. The Victory people would, quite naturally, just cruise at the limit and it was anticipated that most of the owners would too.

But my good friend, Ezio Forcella, who occupies a position of gravitas and dignitas at the Sydney Victory dealership, understands me. That is why he gave me the blackest, meanest, and nastiest bagger on earth – a matte black Hardball. And…well, you know what happens when men ride matte black motorcycles. 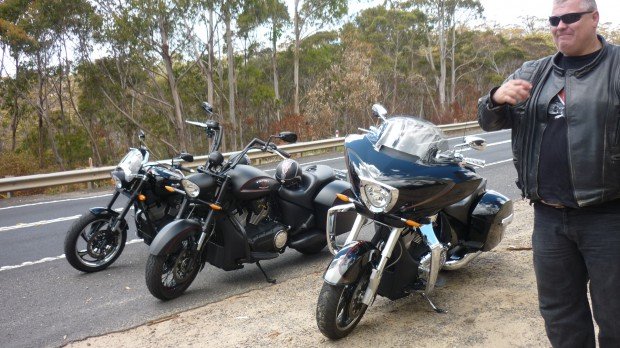 This was the podium at Mt Wilson. Fernando (far left) was a creditable third, me (I won) and Pete’s hard-fought second. That is Pete photobombing my image of Parc Ferme.

I saw a large fellow (whom I later discovered was called Paul), kick his big CrossCountry in the giblets, pass the lead rider and hare off up Bellbird Hill.

Tally ho! I thought to myself and sailed after him. Behind me was a fellow who was two up (and whom I later discovered was called Fernando) and he had also decided that our ascent of the range was to be spirited and in the very finest possible taste.

And so it was. A goodly rate of knots was expressed, everything was passed and an on-coming Highway Patrol car just missed out on throwing us in jail for 20 years. 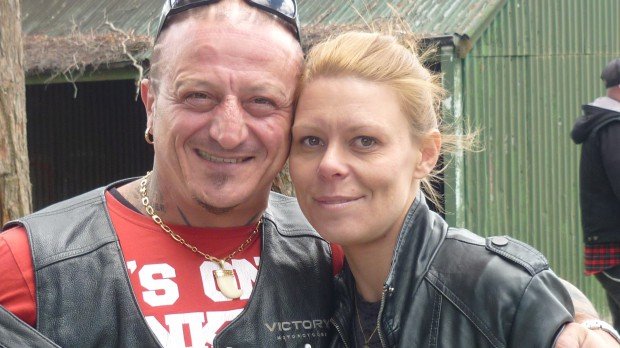 Fernando and his beaut missus celebrate not being in jail at Mt Victoria. 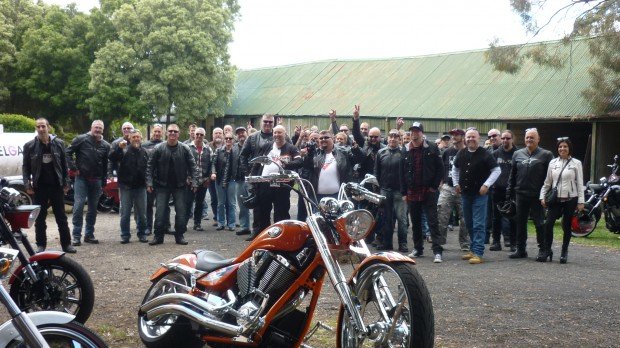 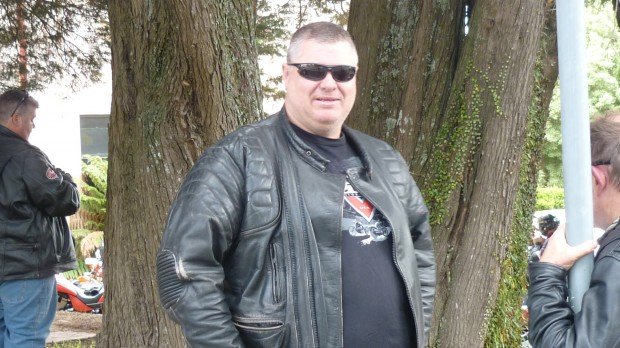 Pete goes alright. If a giant Victory bagger ever rounds you up, it’s probably him.

The three of us pulled up just past the Mt Wilson turn off and introduced ourselves by grinning and calling each other names.

Gee, I thought, they’re are just like my mates.

We waited a few minutes for the rest of the pack to catch up…well, more than a few minutes, and then we rode in a large herd to the guest house at Mt Victoria.

There, the good folks of Victory thanked us all for coming along to celebrate, fed us some lovely food and provided the thirsty crowd with cooling beverages.

Mick Withers from Cruiser magazine and I were asked to award some prizes for the Fattest Rear Tyre, the Skinniest Rear Tyre and the Best Tourer.

I immediately awarded the Best Tourer award to Paul. I felt he deserved it since he had rocketed his giant beast-bike up the range like a man chasing a crazy person. I was gonna award the Fattest Tyre to Fernando, but since he already had the Hottest Girlfriend, I felt he already had enough prizes. We gave the Fattest Tyre award to Chris, because he had the nicest set of rims on his bike. The Skinniest Tyre went to some young bloke whose name I failed to write down (sorry), and that was decided by Mick Withers, since he is far more knowledgeable than me about such esoterica.

It was a good laugh, more than anything else, and no-one seemed offended about who won or didn’t win.

I certainly had a few laughs, met some like-minded people (which surprised me, I will be honest) and rode home smiling and absolutely loving the matte-black bagger I was on.

Thank you for the invite and happy anniversary, Victory.

May you have many more. I’m sorry about speeding. It’s a genetic aberration. I promise I would not have let them seize the bike.